The technical applications of the textile structures become more and more often and the measurement of their mechanical properties is very essential. The multiaxial testing of the textile fabrics is of special interest because the fabrics are non-isotropic materials. However the existing equipment is usually expensive and complex. In the present paper a new testing method is presented. The method is based on the operation of the corresponding testing equipment. The mechanical parts have been designed and constructed after their computational modelling so that the prediction and the exact estimation of their performance were possible. The design of the sensor and the electronic modules has been made exclusively designed in order to face the requirements of the measurements of the multiaxial tensile testing. The first version of the testing instrument gave promising results ensuring that the sensing principle is trustful and the mechanical and electronic parts are operational for the testing of knitted fabrics.

The textile fabrics are structures produced by the characteristic interlacing of the yarns. The type of the structure results in a usually non-isotropic mechanical behaviour. The trivial tensile tests are limited in the warp and weft directions in the case of woven fabrics or in the bursting test in the case of knitted fabrics. Bursting test is considered as a multi-directional tensile test. The basic aim of those tests is the determination of the breaking strength. Both testing methods with the different load application, cannot give enough information about the directional mechanical behaviour of the fabric. The breaking strength is an important information, however the lowstress testing gives important data necessary for the implementation of the textile fabrics in technical and precise applications especially if it could be measured in many directions and not only in the two of them. The related literature review gives an idea of the importance of the multiaxial testing (and not only loading) of the textile fabrics. The earlier publications focus on the measurements for technical applications of the textile fabrics [1,2]. The work done in the technical textiles and composites area continues until today [3-5]. Two very important works appeared recently [6,7]. Ozipek has correlated various methods for the determination of bi/multi axial loading and testing of fabrics. Very important result of this important work is the numerical correlation of the measurements taken with the various methods. This fact has forced our research since it was obvious that the results obtained through the multiaxial tensile testing are correlated to the typical axial tensile testing results. Finally, Lima reports the design and construction of a very impressive multi-axial in plane tester of fabrics with many actuators and sensing elements. The testing principle and the concept of the tester developed by Lima are excellent and if the complexity and the related costs were lower, it is considered that the tester would be suitable for the majority of the textile applications.

In the frame of the current work a new device has been designed and developed for the multi-axial testing of the textile fabrics (Figure 1). The basic concept of the new design is the development of low cost testing equipment taking the advantages of the existing correlations and the simplicity of the testing procedure. 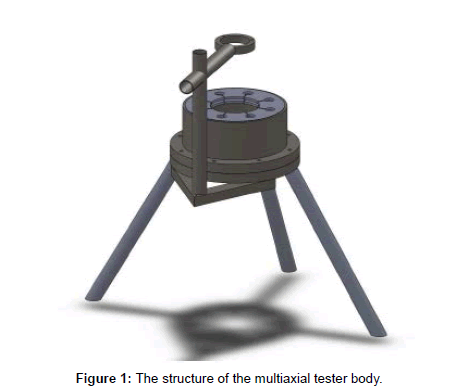 Figure 1: The structure of the multiaxial tester body.

The fabric under test is laid over the testing level, a circle of 20 cm diameter. In the center of the cycle a cyclic opening is foreseen in order to allow the sinking of the testing ball. The ring between the internal opening and the outer limit of the surface supports the fabric and in the same time it operates as the deformation sensor. The ring is divided into eight sectors, so that the measurements of the deformation and thus the applied load can be taken. This measuring principle gives data in four axes i.e. in eight directions concluding in steps of 45 degrees.

The fabric laid over the testing surface is clamped around the body of the tester. The testing ball is fixed at the end of a vertical shaft. The shaft is moving downwards forcing the fabric to be deformed in the central opening of the testing device. Depending on the stiffness of the fabric in every direction, the corresponding sensor gets stimulated in a different means. The readings of the eight sensors give a deformation profile of the fabric over the eight directions (Figure 2). 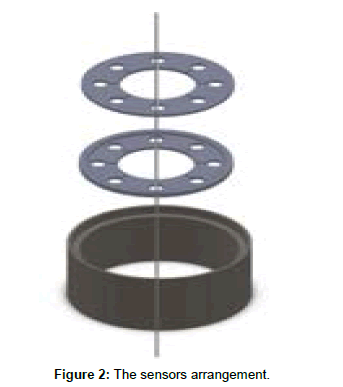 The selection of the material and the thickness of the sensor plates has been made after a computational modelling of their structure and deformations and the related mechanical analysis. Finite Element Method and ANSYS software has been used for the computational modelling and analysis of the sensor plates. The basic requirement set to be fulfilled is that the sensors should be able to undertake load up to the maximum one set by the tensile tester of the Kawabata Evaluation System for Fabrics i.e. up to 500 g/cm. In the simulations a design solution was investigated, which for this maximum load density could give acceptable deformations concerning the limitation of the elastic operation of the sensor and the linear electrical operation of the capacitors.

The sensors have been tested for the examination of their operation. As it can be seen the sensors show a linear behaviour especially for loads higher than 20 g. The observed linearity is of high importance for the process and use of the measurements. However, the non linear lower region if necessary can become useful as well by using linearization software tools (Figure 4). 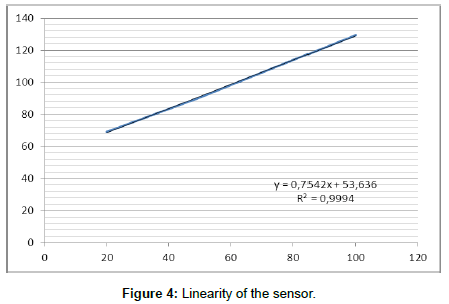 Figure 4: Linearity of the sensor.

In order to avoid systematic measurement errors due to possible minor constructional differences of the dimensions of the sensor sectors a calibration phase for every sensor part took place before the real testing procedure. Figure 6: Detail of the measuring sectors.

The preliminary tests performed and measurements taken showed that the behaviour of the sensors is stable and reliable and also that the respective measurements are repeatable without any drift or difference observed.

The tests on the knitted specimens showed that the apparatus can be used for the multiaxial tensile testing of knitted fabrics. The range of the measurements is within the required limits set by the structure of the fabrics. It became possible to establish an alternative method able to substitute the traditional and extremely expensive and complex multiaxial tensile testing evaluation of the fabrics. The method is not limited to a specific category of fabrics and it can be obviously expanded to woven fabrics as well.

Typical measurements for warp and weft knitted fabrics and the respective multiaxial tensile profiles are as in the Figure 7 and 8. Thepolar representation of the measurements in the respective directions can give also an instant visual evaluation of the tensile behaviour of the fabric under test. It allows the easy comparison of different signals and the quantitative analysis of their correlation. 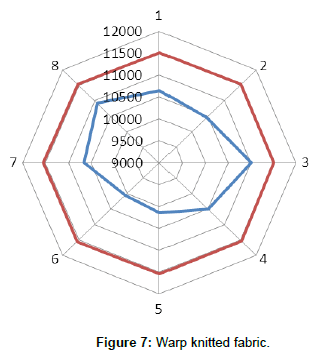 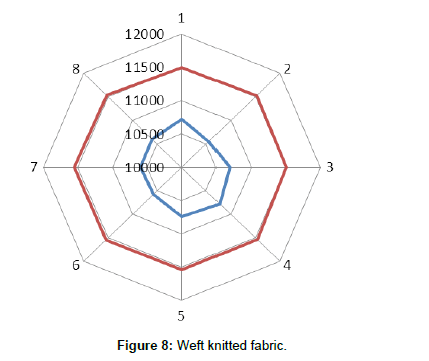 A new multiaxial testing device has been developed. It allows the simple operation and the easy testing procedure, under a low cost concept. The mechanical design and construction has been followed by the design and development of the electronic part. The first results of the new measuring setup are consistent and repeatable thus promising. It is important to continue the study of the operation and its parameters so that the test to become of a standard character. Additionally the investigation will continue for the correlation between the obtained results and the ones of the traditional tensile tests. Finally the future research includes the important phase of the evaluation of the results, which is of the higher interest from the user point of view.