Immune checkpoint inhibitors enhance T cell response against malignant cells and are standard of care in many tumor types. Disinhibition of cytotoxic T cells in normal organs and inhibitrion of regulatory T cells can lead to immune-related adverse events. Here we describe a 60-year-old man with metastatic melanoma treated with three cycles of nivolumab and ipilimumab. He subsequently presented with new-onset brittle diabetes, rash, fever, and acute kidney injury. After initiation of insulin and aggressive fluid resuscitation, his kidney function transiently improved but then dramatically worsened.

Due concerns regarding hyperglycemia, a steroid-sparing agent was necessary and he was successfully treated with front-line mycophenolate mofetil, leading to normalization of renal function. The patient went on to develop a complete response and remains disease-free four years later. We conclude that mycophenolate can serve as an effective frontline therapy for immune-mediated acute kidney injury when steroids are contraindicated.

Immune Checkpoint Inhibitors (ICPIs) have revolutionized the field of oncology and have been shown to increase survival in many tumor types [1]. ICPIs work by targeting molecules involved in downregulating the immune response, ultimately resulting in activation of cytotoxic T-cells and enhancing the immune system's ability to recognize and destroy neoplastic tissue. Several ICPIs have been extensively studied and approved for clinical use, including those that target cytotoxic T-lymphocyte-associated Antigen 4 (CTLA- 4), expressed on CD4/CD8 positive lymphocytes, and Programmed Cell Death-1 (PD-1) or it's Ligand (PDL-1), expressed on multiple tissue types including tumor cells and hematopoietic cells. While the goal of targeting these inhibitory pathways is to enhance anti-tumor T cell reactivity, this effect is not specific to cells either in the tumor microenvironment or to those that recognize tumor antigens.

Disinhibition of T cells in normal organ tissues or inhibition of regulatory T cells can lead to Immune-Related Adverse Events (irAEs). Multiple mechanisms have been suggested to explain this phenomenon, including activation of autoreactive T [2] or B cells [3,4] and the production of autoantibodies [5]. These events can involve almost any organ including the colon, skin, thyroid, pancreas, liver, heart, skeletal muscles, central and peripheral nervous systems, eye, and kidneys [6].

Of specific interest to this case report is the incidence of autoimmune nephritis due to exposure from checkpoint inhibitors. A large meta-analysis of 11,482 patients, showed an increased risk ratio of Acute Kidney Injury (AKI) in patients treated with PD-1 inhibitors compared to both control therapy and non-nephrotoxic control therapy (risk ratios of 1.86 and 4.2, respectively) [7]. The incidence of AKI due to anti-PD-1 therapy alone has been reported as 1.5% and increases to 4.5% when used in combination with ipilimumab (anti-CTLA-4) [8]. On histologic examination, the majority of patients with AKI due to ICPI have Acute Interstitial Nephritis (AIN), characterized by a lymphocytic infiltration predominantly composed of CD3+ lymphocytes. One patient had evidence of thrombotic microangiopathy [9].

The National Comprehensive Cancer Network (NCCN) recommends holding immunotherapy and starting steroids for grade III AKI, defined by the CTCAE v5.0 as a creatinine level that is greater than three-fold baseline. Steroids, however, are associated with several unwanted side-effects, including hyperglycemia, edema, myopathy, and bone loss. If a patient experiences intolerable side-effects and/or if no improvement in creatinine is seen, the recommendation is to add immunosuppressive drugs such as azathioprine, cyclophosphamide, cyclosporine, infliximab, and mycophenolate [10]. Unfortunately, there are sparse randomized/prospective data to help guide the choice of immunosuppressive agents.

Here, we present a case of ICPI-induced AKI treated with mycophenolate mofetil (MMF) as first-line treatment, chosen as a steroid-sparing drug in a patient with concurrent immunotherapyinduced type I diabetes.

A 60-year-old male presented to our oncology practice in March 2015 for surveillance of a 6 mm ulcerated melanoma of the chest with 12 mitoses/mm2 and one of five involved cervical lymph nodes. At diagnosis, he also had a synchronous 0.75 mm melanoma of the left posterior paramedian neck. Upon surveillance imaging 15 months later, he was found to have a local recurrence in the left axilla and clear metastatic disease in the lungs and mediastinal lymph nodes. His LDH was normal. A bronchoscopic biopsy in June of 2016 confirmed the diagnosis of metastatic disease. Tumor sequencing revealed a V600E mutation in Braf without any other targetable mutations. A brain MRI was negative.

He started treatment with nivolumab 1 mg/kg+ipilimumab 3 mg/ kg every 21 days [11]. Two weeks after his third cycle of combination therapy, he developed a pruritic rash covering 60% of his body surface area, characterized by erythematous patches. Oral prednisone 50 mg was started for the rash. The following day he was sent to the emergency department for severe malaise, nausea, and vomiting and found to have a blood sugar of 1200 mg/dL, potassium of 9.5 mmol/L, anion gap of 31, and pH of 7.1 on arterial blood gas, consistent with diabetic ketoacidosis. Other notable labs at the time of admission included a creatinine of 4.5 mg/dL (from a baseline of 1 mg/dL), lipase of 662 IU/L, undetectable C-Peptide (<10 ng/mL), and a Hb A1c of 6.9%. This clinical presentation was consistent with immunotherapyinduced diabetes and acute renal failure secondary to hypovolemia. The patient was managed with an insulin drip for 24 hours and transitioned to 50 units of lantus HS with sliding scale insulin with each meal. He was initially resuscitated with 30 cc/kg intravenous (IV) fluids and was continued on IV fluids for a period of 2 weeks to match urinary losses secondary to osmotic diuresis from hyperglycemia. With these interventions, his creatinine level improved to 0.8 mg/dL on hospital day 5.

More than two weeks post-admission, despite adequate glycemic control with insulin, hydration, and maintenance of euvolemic status, his creatinine precipitously rose, reaching 2.23 mg/dL on hospital day 16, with an even more dramatic increase to 4.53 mg/dL on hospital day 19. He did not receive nephrotoxic drugs during this period, his microscopic urine analysis revealed minimal pyuria (3-5 WBCs per HPF), fine granular casts, and a few epithelial/hyaline cells. A renal ultrasound did not reveal any post-obstructive etiology. A clinical diagnosis of autoimmune nephritis was made. Given the new onset of brittle insulin-dependent diabetes, mycophenolate mofetil, a potential steroid-sparing agent, was chosen at a dose of 1000 mg BID in addition to a 5-day course of prednisone 50 mg daily. In the subsequent week, his renal function improved to 2.08 mg/dL on the day of discharge (Figure 1). 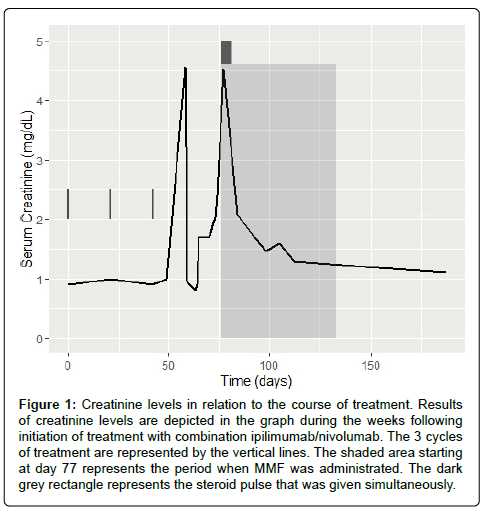 As an outpatient, his renal function continued to improve, and within 30 days of started MMF, his creatinine reached 1.3 mg/dL. Immunosuppressive therapy was weaned over a period of 2 months, with no recurrence in his AIN. Of note, during his hospitalization, he was also diagnosed with hypopituitarism and was started on 7.5 mg maintenance prednisone per day. Given the extent and multi-system nature of his immunotherapy-toxicity, he was not re-challenged with ICPIs. Scans obtained 2.5 months after treatment initiation showed resolution of his left upper lobe metastases and interval decrease in paratracheal adenopathy from 2.4 cm to 1.3 cm. He went onto develop a complete and durable response that, to-date, is ongoing at over four years (Figure 2). He continues to follow in the melanoma clinic under routine surveillance.

AKI in ICPI treated patients can be from various causes, including pre-renal azotemia, concurrent medication-induced nephrotoxicity, and tumor-related ureteral obstruction. In the case above, the patient developed an AKI approximately 11 weeks after initiation of combination ICPIs, originally due to hypovolemia secondary to urinary losses in the setting of new-onset DKA. The initial AKI responded to aggressive fluid resuscitation but renal function subsequently worsened rapidly, despite adequate hydration. Although a renal biopsy was not obtained due to clinical acuity, given the presence of multiple other concurrent irAEs (fever, rash, ICPIinduced diabetes), the findings of his urinalysis and the absence of other renal insults, a clinical diagnosis of AIN was made.

While the rate of AKI due to ICPI is low, the incidence is increasing as the number of clinical indications for immunotherapy has risen [12]. Additionally, severe injuries can occur in a small percentage of patients. In a review of renal irAEs, 88% were reported to have acute interstitial nephritis [13]. Traditionally, AIN is characterized by the presence of oliguria, proteinuria, pyuria, hematuria, and in some cases, eosinophilia, rash, and fever [14]. The patient above had relatively bland urine sediment with minimal proteinuria and some pyuria, suggesting that AIN due to ICPI may present in an atypical fashion.

The onset of ICPI associated AIN from time of drug initiation varies widely, from 21-245 days after drug exposure [13]. Our patient developed creatinine elevation more than two months after treatment initiation. The exact mechanism of AKI in ICPI-treated patients remains unclear. Delayed onset can be attributed to the disrupted signaling of CTLA-4 and PD-1, which can occur at various times during therapy, leading to loss of self-tolerance and migration of autoreactive T cells to the kidney, resulting in T cell predominant renal inflammation. In-vitro studies have shown that PD-L1 blockade enhances cytotoxic T cell activity against tubular epithelial cells [15].

The long half-life of the immune checkpoint inhibitors and prolonged PD-1 receptor occupancy can require an extended duration of steroid treatment with a slow taper to reduce the chances of relapse [16]. ICPI-induced AKI, as in the case of most irAEs, is typically managed by empiric initiation of corticosteroids. In a patient with newly diagnosed type I diabetes, the administration of high dose steroids in a prolonged fashion for acute kidney injury would certainly affect glycemic control and increase morbidity. In these circumstances, steroid-sparing drugs are crucial and can additionally minimize other unwanted side-effects.

Given this rationale, mycophenolate mofetil was chosen as a front-line, steroid-sparing agent. MMF is a prodrug of mycophenolic acid (MPA), an Inhibitor of Inosine Monophosphate Dehydrogenase (IMPDH) [17] which prevents the de novo synthesis of guanosine nucleotides [18]. It preferentially targets the type II isoform of IMPDH, which is more selectively expressed in activated T and B lymphocytes, resulting in a potent cytostatic effect and lymphocyte suppression. It can also induce apoptosis of activated T-lymphocytes, which may eliminate self-reactive clones, and decreases the recruitment of immune cells into sites of inflammation via suppression of glycosylation and adhesion molecules [19].

MMF has been in use for more than 20 years and is generally well-tolerated. The few side effects that may occur are reversible and respond well to dose reduction. MMF is associated with elevated levels of liver transaminases, but the significance is unclear. Importantly, the half-life of MPA is 17.9 hours in healthy individuals [20], and immune suppression is therefore limited. MMF is widely used for suppressing autoimmune hepatitis, both spontaneous and in the ICPI treated patients, and our experience indicates that it can be used for other select irAEs, such as ICPI-induced nephritis.

A retrospective study that analyzed 212 patients treated with ICPI has shown an increase in response for patients with multiple irAEs [21]. These data suggest that either initial immune stimulation or excessive T-cell stimulation might be more important for tumor response than the subsequent use of immune suppression to treat toxicity. In the case above, the patient went on to develop a complete response to three cycles of ipilimumab and nivolumab and remains in CR over four years later. He has not had a recurrence of his immunemediated toxicities other than permanent damage to endocrine organs, and remains on low-dose prednisone for hypopituitarism and insulin for his diabetes.

In summary, ICPIs can result in the presence of immunemediated toxicity, which at times, can simultaneously involve multiple organs. There is a great need to identify effective steroidsparing immunosuppressive agents to avoid morbidity related to glucocorticoids, particularly in diabetic patients, with MMF serving as an effective alternative in AIN. Toxicity, despite being treated with immunosuppressive therapy, correlates with increased response rates and is likely a result of widespread immune system stimulation.

H. Kluger reports research grants from Merck, Bristol-Myers Squibb, and Apexigen during the conduct of the study, and personal fees from Corvus, Nektar, Biodesix, Roche-Genetech, Pfizer, Iovance, Immunocore, and Celldex, Array Biopharma, Bristol-Myers Squibb, Clinigen, and Merck, Clinigen and Shionogi, outside of the submitted work.