Myxoid Liposarcoma in a 2 Year old Boy: A Case Report

Introduction Liposarcoma is a rather uncommon soft-tissue tumor. The finding of a myxoid subtype has been shown to correlate with a poor prognosis. Although surgical treatment is relevant for resectable disease, radiation therapy and chemotherapy are also recognized forms of treatment, especially for more advanced disease. Case presentation We report the case of a 2 year old boy who presented with a right gluteal mass and right lower abdominal swelling of 8 months duration, with inability to walk, and progressive difficulty with urination. An irregular abdominopelvic mass involving the right gluteal region was seen. Computed tomography showed the mass to have the density of muscle, compressing the urinary bladder, with bilateral dilatation of the pelvi-calyceal systems. Biopsy histo-pathology revealed malignant cells with lipogenic differentiation as well as Lipoblasts. He had chemotherapy and concurrent radiotherapy from weeks 9-12 of chemotherapy; following which a complete response was reported both clinically and radio logically. After a 49-week symptom-free period, he had a recurrence of right gluteal swelling and newer masses in the posterior neck and upper back. He had salvage chemotherapy; but his clinical condition deteriorated with altered sensorium and convulsions. He eventually succumbed to the disease 31 months after the initial diagnosis. Conclusion Myxoid liposarcoma is a rare tumor in the pediatric age group. Improvements in facilities for multi-modal treatment might help to improve outcomes in a limited-resource setting like ours.

The non-rhabdomyosarcoma soft tissue sarcomas, of which liposarcoma is one, constitute a heterogeneous group of tumors that account for 3% of all childhood malignancies, making them rare tumors [1].

liposarcomas in children also occur in older children (median age-12 years) and the rarity of this disease in children is such that information on the natural history and treatment is derived from the experience in adult patients [1].

This tumor is associated with a nonrandom translocation - t(12;16) (q13;p11); and the finding of a myxoid sub type confers a further grim prognosis due to its high grade nature and the presence of more atypical cells, as it tends to be locally invasive, though rarely metastasizes.

The finding of such a rare tumor in an atypical age-group, presenting with metastatic disease in a resource-limited setting is the case at hand.

Master I.A. was a 2 year old boy; presenting on account of a progressive painless right gluteal mass and right lower abdominal swelling of 8 months duration. There was associated progressive right leg swelling, inability to walk, difficulty with passing urine (relieved by urethral catheterization) and weight loss. No jaundice or bleeding from any part of the body. The child was born at term by a normal vaginal delivery and there were no significant perinatal events and he has been thriving well until onset of symptoms. There was no history of trauma, exposure to radiation, family history of similar symptoms or childhood malignancies.

Physical examination revealed a conscious child, small for age, afebrile and had no significant peripheral lymph node enlargement or oedema. The abdomen was distended, with prominent superficial veins draining cephalad. A palpable hard, irregular and non-tender abdominopelvic mass extending from the right iliac region across to the suprapubic region upwards slightly above the umbilicus measuring 20 cm × 16 cm in widest diameter. Liver and spleen were not palpably enlarged. A similar hard, non-tender, right gluteal mass measuring 4 cm × 4 cm involving lower outer quadrant of the gluteal region was also demonstrated, there was no change in overlying skin.

Contrast enhanced abdominopelvic computed tomography showed a huge soft tissue density mass (isodense to muscle; HU ≈ 26) fully occupying the pelvis with lytic destruction of the ipsilateral ischial bone and involvement of the right iliopsoas, piriformis, gluteus minimus as well as the right ischiocavernosus was noted. There is superficial displacement and compression of the gluteus maximus while the urinary bladder was seen displaced superiorly and anteriorly. Patchy areas of enhancement were seen within and around the mass post intravenous contrast administration. A relatively hypodense (HU 13) focus with ring enhancement is seen within the right gluteus minimus. Both renal calyces are dilated, the kidneys are otherwise normal. There was no Para-aortic lymphadenopathy or ascites.

Wedge biopsy and histology of the gluteal mass revealed sheets of round cells with hyper chromatic nuclei, areas of lipogenic differentiation, as well as cells remiscent of lip oblasts; in addition to multinucleated giant cells. A pathologist’s conclusion of a myxoid lip sarcoma was made. The patient’s clinical stage was T2b N0 M0 (AJCC stage III).These is shown in the photomicrograph below (Figures 1 and 2). Figure 1: A relatively hypodense (HU 26) focus with ring enhancement is seen within the right gluteus minimus. Figure 2: A relatively hypodense (HU 13) focus with ring enhancement is seen within the right gluteus minimus.

Due to the diffuse and extensive extent of the lesion and the low likelihood of achieving adequate resection without compromising vital structures, it was decided that chemotherapy and radiotherapy be administered, with possible surgical resection if response to the chemo-radiation was achieved. He had several courses of chemotherapy (intravenous ifosfomide, etoposide and vincristine) and concurrent radiotherapy from week 9 to week 12 of chemotherapy (total of 45 Gy in 29 daily fractions to local site (Figure 3).

The child had a clinical complete response to the modalities of treatment evidenced by the resolution of clinical symptoms (disappearance of the mass, child began to walk with a satisfactory gait and had a resolution of the bowel and urinary symptoms) as well as absence of mass lesions on abdomino-pelvic ultrasound. Repeat Computed tomography scan was not done at this point due to cost, as this test would have had to be done based on out-of-pocket payment.

Forty-nine weeks after, he presented with a recurrence of right gluteal swelling and other newer masses in the posterior neck, upper back (Figure 4). Figure 4: B-mode transverse sonogram of the abdomen at the level of the kidneys showing moderate right hydronephrosis (arrow).

He was commenced on salvage chemotherapy (intravenous gemcitabine and darcabazine); he was not clinically fit at this time for radiotherapy, as he would have had to be admitted in a distant radiotherapy facility.

Repeat abdominal computed tomography at this time showed a huge, ill-defined heterogeneous mass with HU 30-70 involving the right gluteal region, extending superiorly into the pelvis and inferiorly into the posterior compartment of the thigh, infiltrating adjacent muscles. The gluteal mass measures 12.3 × 10.78 × 9.38 and the pelvic component measures 5.95 cm × 7.1 cm × 8 cm. No enlarged lymph node is seen along the iliac vessels. Other abdominal organs were essentially normal (Figures 5 and 6). 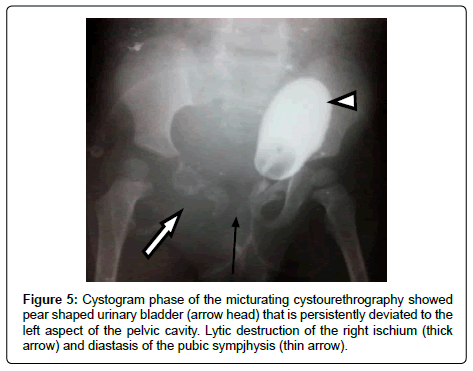 Figure 5: Cystogram phase of the micturating cystourethrography showed pear shaped urinary bladder (arrow head) that is persistently deviated to the left aspect of the pelvic cavity. Lytic destruction of the right ischium (thick arrow) and diastasis of the pubic sympjhysis (thin arrow). 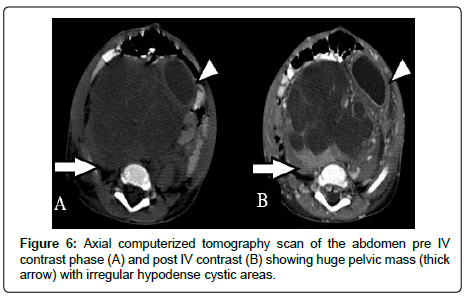 He later developed altered sensorium and convulsions. He was on supportive care with anticonvulsants, antibiotics, and mannitol to reduce raised intracranial pressure. He eventually succumbed to the disease about 31 months after the initial diagnosis (Figure 7). 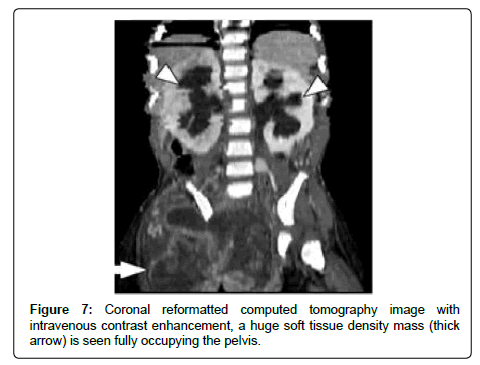 The myxoid type, which our patient had, is rare. Although liposarcomas account for up to 18% of all soft tissue sarcoma, making this case an interesting one to discuss. In fact, no previous cases of this condition have been reported to date in Nigeria [4].

This was a 2 year old boy – and, although data is sparse, the condition appears to have no sex predilection [2].

Although lip sarcomas can occur in almost any part of the body, common sites include the thigh and the abdomen. Our patient had the disease in the lower abdomen and gluteal region, conforming to the leading sites of predilection previously stated in literature [2]. Our patient also had urinary outflow tract obstruction with back-pressure effects on the upper urinary tract.

Due to limited data on this condition in the paediatric age-group, there is not enough data for an agreed treatment modality for lip sarcomas as yet. Surgical resection is however the primary treatment for localized lip sarcoma, where often a wide local excision is done, with the intention of achieving tumor free margins at limited damage to contiguous structures. Achieving a tumor-free margin in the abdomen might be at times challenging, as was the case in this patient, based on his computed tomography findings. In such instances, pre-operative chemo-radiation to downsize the tumor and allow tumor-free margins at excision might be advisable, which was the initial treatment plan in this patient [6].

This patient had an initial satisfactory response to the chemoradiation, as shown both clinically and on a follow-up ultrasound after the radiotherapy. This would suggest that, despite the known poor prognosis of myxoid lip sarcoma, a fairly satisfactory response may be expected in some of these patients.

Although the repeat ultrasound suggested a clinical complete response, a repeat CT scan at this time would have been more helpful to rule out any residual lesions missed on ultrasound. There are however still challenges of cost in the management of oncology patients in our setting – chemotherapy, radiation therapy and serial imaging investigations all done as out-of-pocket payment. This explains why the patient could not afford a repeat CT scan at this point, especially when ultrasound and clinical evaluation suggested a complete response.

Our patient presented with recurrence at 49 weeks post chemo-radiation, still highlighting the grim prognosis of the myxoid subtype of this condition. The tumor is an intermediate grade tumor with a definite metastatic potential(4). He also had recurrence at the primary site as well as at distant sites.

Although five-year disease specific survival rates of 88% for myxoid lip sarcoma in the Caucasians, more data on this condition will be needed to estimate the management outcomes of this condition in our environment.

A poorer outcome with abdominal disease has been shown, possibly due to the difficulty of complete tumor eradication in this site, without damage to contiguous structures [7]. This might have been an important contributor to the outcome in this patient, who had unrespectable disease at presentation.

This condition is rare in our environment and more so in children and treatment outcomes might have been influenced in this case by the location of the disease and challenges of cost and available facilities. It is believed that with improved facilities for management of oncology patients in our environment, as well as improved health insurance coverage for oncologic management, patients’ presentation is likely to improve, and physicians are likely to gain more experience with this condition, thereby subsequently reporting improved survival from this condition.