Copyright: © All articles published in Journal of Fashion Technology & Textile Engineering are the property of SciTechnol, and is protected by copyright laws. “Copyright © 2021, SciTechnol, All Rights Reserved.

Needle punched nonwoven geotextiles exhibit the best performance parameters compared to other structures when used in civil engineering applications, drainage, filtration, soil protection, erosion control, river bank protection, river training, coastal protection and providing reinforcement. Besides, the physical and mechanical characteristics significantly influence the performance & functionality of the product. There is a significant correlation between the mechanical properties of geo-textiles & their aerial mass. In this paper, different production parameters such as feed rate, needle penetration, stroke frequency has been optimized for manufacturing polypropylene based geosheet samples of different aerial mass which are used to produce geobags by stitching for sand filling and also their various properties has been analyzed.

Geosheet is generally a nonwoven geotextile composed of polyester, polypropylene or polyethylene, used to produce geobag which has better protection capacity than concrete blocks as underwater protection; greatly due to their instinctive filter properties and better launching behavior when underwater slope is under-scoured and improves the overall sustainability of riverbank protection works.The effect of fiber composition, mass per unit area and depth of needle penetration on tensile properties of polyesterviscose blended nonwoven geotextile is investigated and it is found that, increase in fabric weight and polyester content increases tensile resistance of fabrics. It was also found that depth of needle penetration has no significant effect on the tensile properties [1]. Tensile strength and puncture resistance increase with the increase of the aerial mass of the nonwovens, while the perforation diameter decrease with the increase of the aerial mass [2]. Needle penetration speed has an effect on geotextiles thickness and air permeability. Webs needled at higher speeds due to better coherency have higher tensile strengths in both the machine and cross directions [3]. Reorientation of the fibers from horizontal to vertical direction as a result of depth of needle penetration and stroke frequency decreases the transmissivity of geotextiles due to breakage of fibers, causing a significant reduction in large pores [4,5]. An increased depth of needle penetration resulted in deeper interlocking and entanglement of fibers and thus higher compaction, although when the depth of needle penetration was too deep it could lead to negative effects such as fiber breakage, which was related to the mechanics of tensile failure [6].

Regular PES fiber nonwoven geotextile has better resistance to static puncher than recycle PES fibers. It has also been represented that the geotextile made from polypropylene fibers has better values than the geo-textile made from regular polyester fibers [7]. A study shows that it was aimed at understanding the effect of testing speeds on the frictional properties of needle punched nonwoven substrates. Results indicate that as the speed of the testing increased, frictional resistance increased and the coefficient of friction decreases with the increase in applied normal loads. The installation procedures (which induce mechanical damage) and abrasion can cause unwanted changes on the properties of the geo-sheet [8]. Six hundred geo-bags made from geosheets were tested to evaluate the failure in terms of friction force, water depth, flow rate and bag aging. An investigation of the effect of geobag aging represents that 52% of saturated geobags yield weight in the range 0 to 5% and about 70% of initially dry bags yield weight in the range 10 to 20% [9]. Due to long term service of geo-bag the properties of geotextile materials could be predicted using empiric models, finite model theory, and composite material theory, using computer prediction models of nonwoven textile stretching and also using mechanical models. Mechanical properties of needle punched nonwoven geotextile substances depend on their structural design, and also on technological conditions during production process. Thereby, the most important roles are played by the structural mechanical properties of fibers, fiber orientation, geo-textile surface mass and parameters of the needling process [10]. The more the GSM of geobags is, the more its stability is due to less thickness variation and retaining its tensile strength as well as dimensional structure after using geobags around six months when higher GSM is used [11]. The performance of geo-bags revetment are more stable than bags of lower mass under high water velocity and in incipient motion test failure mechanism initiated at a water flow velocity of 2.9 m/s. Conveyance Estimation system (CES) was used to extend the laboratory measured hydraulic parameters to predict mobile bed formation for different water depth after performing fixed bed experimental observation. The CES model helps in characterizing bed changes against different water depth in revetment failure and develop much needed geo bag revetment design guidance [12]. Success of geo-bag revetment is dependent on the geobags remaining stable under current loading. Geobags have a range of fill percentage which optimizes the stability of the elements. Bags with lower fill percentage appears less stable than those of higher fill percentage because internal sand movement within the bags [13].

Fibers used: Nonwoven webs are made from polypropylene fibers. Polypropylene granules obtained from Tasnee, Saudi Arabia are used to produce synthetic polypropylene fibers. Polypropylene fibers are used as raw material to prepare the nonwoven samples due to its cheap price and conformity of fibers to production methods. It exhibits excellent chemical resistance to acids and alkalis at ambient temperatures, have an exceptionally low moisture absorption such that the action of water at ambient temperature has no effect on their mechanical characteristics and are resistant to microorganisms, insects and the growth of mildew or fungi. Two color (White and Black) fibers are used to produce nonwoven fabrics where the ratio of white to black fibers is 88:12. The properties of polypropylene fibers are tested by VIBROSKOP 500 and VIBRODYN 500 shown in Table 1 below Figures 1 and 2. Preparation of test specimen: Nonwoven fabric samples for geosheet are produced on a ANDRITZ needle punch production line machines. Nonwoven webs are made from polypropylene fibers. White and Black polypropylene fibers are fed to the needle punching line LAROCHE feed system. There are three feeders in which feeder 1 & feeder 3 feed white polypropylene fibers whereas feeder 3 feed black polypropylene fibers to weighing bale opener. After opening the fibers are laying on horizontal opener in a manner of sandwich where black fibers are laying in between two white fibers layers. In Thibeau Metering Silo (TMS) fibers are supermix and blend for uniformity. The Thibeau Chute Feed (TCF) card feeders and the Thibeau Metering Silo (TMS) combindly ensure the feeding of the fibers up to 90 mm staple length. Both participate to the final opening for the constant amount of fiber in feed to the card. In carding machine, the fibers are aligned parallel and uniformly distributed web produce. The web is then transported to the cross lapper. The purpose of this section is to lay down the carded web to the desired width. It helps to build up the desired weight by controlling number of layers. A benefit of having multiple layers is increased uniformity since heavy or light areas in the individual webs tend to be evened out in multiple layers (Figure 3). Then the webs were fed into the needle loom. There were two needle looms used in ANDRITZ production section. The fibers in the web are entangled by top needle in upper surface at first needle loom and then drafted by ZETA drafter go through second needle loom bottom surface fibers are bonded from bottom punching. The needle loom- 1 contains 93600 needles (divided into three needle boards forming an entangled pattern) with the technical specification 15×30×38×3.5 whereas the needle loom-2 contains 84000 needles (divided into two needle board) with the technical specification 15×18×38×3. Different needle punched nonwoven samples are produced with polypropylene fibers with aerial mass of 350 GSM, 400 GSM, 450 GSM, 500 GSM, 550 GSM, 600 GSM used to perform this study. These samples are identified as G1, G2, G3, G4, G5 and G6 respectively. The actual parameters for each run are shown in Table 2.

Table 2: Actual parameters for each Sample. 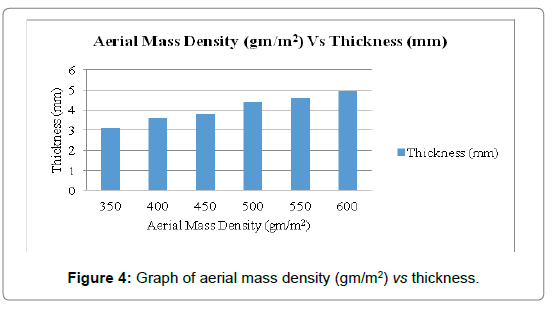 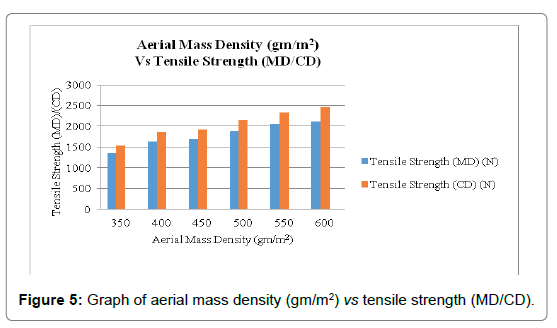 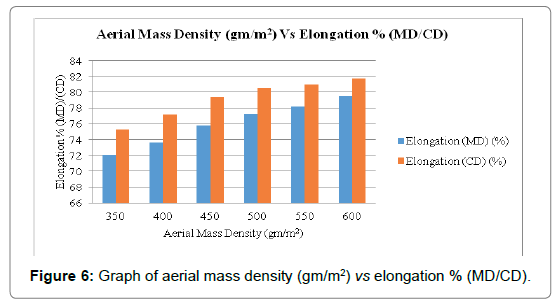 Though elongation % is not consistent, elongation at cross direction is higher than machine direction for most of the cases. This is because less numbers of fibers are laid and oriented in the machine direction in the cross-lapped web, which will decrease cohesive forces between fibers, thus enhancing sliding over effect when the external load is applied. The orientation of the fibers in cross direction more parallel and attained in mechanical formation of the fiber web. 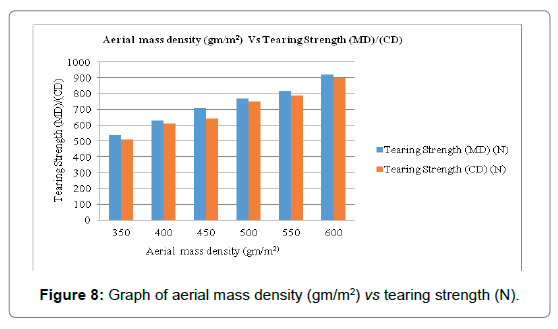