Compassionate use of Saltikva was sought for a patient with stage 4, metastatic pancreatic cancer. Approval was granted for an n=1 multiple dose (every 2 week) trial with concomitant FOLFIRINOX. Now, at 15 months, this patient has not experienced any toxicity to Saltikva, continues therapy, has normalized CA19-9 levels, maintained her immunologic cell populations despite cytotoxic chemotherapy, demonstrated a strong NK cell response, and has a radiologic regression of metastatic tumor burden with a complete absence of tumor activity by PET scan.

Microbial-based cancer therapeutics have become an attractive strategy for cancer therapy because of the intrinsic immune enhancing and cancer targeting properties [1,2]. We have developed an attenuated strain of Salmonella typhimurium that is non-toxic, orally administered and engineered to carry the human gene for IL-2 (renamed Salmonella-IL2 or Saltikva) to impart an immunologically mediated tumor cell kill within the tumor microenvironment [3-6].

Although initial experience in the published literature has been mixed with microbial based cancer therapies, a recent Phase I dose escalation study demonstrated the safety of orally administered, attenuated Saltikva (Salmonella-IL2) to patients with metastatic carcinoma [7]. Although these patients did not demonstrate a survival advantage with a single dose of Saltikva, a significant surge in their NK cell population was observed. In addition, a recent study in companion dogs with metastatic osteosarcoma receiving Salmonella-IL2 with concomitant chemotherapy demonstrated a strong therapeutic benefit based on preclinical evidence of synergy between Salmonella-IL2 and doxorubicin [8,9].

IB is a 70-year-old female with a past medical history of hypercholesterolemia presented with a several week history of abdominal pain and bloating. Workup eventually elucidated a 3.9 × 5.7 cm mass in the tail of the pancreas with invasion of the splenic hilum and left adrenal gland. In addition, there were multiple metastatic nodules in the lungs and liver. Subsequent fine needle aspiration and biopsy confirmed the diagnosis of Stage 4 pancreatic ductal adenocarcinoma. She was immediately started on the FOLFIRINOX regimen of leucovorin, 5-fluorouracil, irinotecan and oxaliplatin administered every 2 weeks. Well aware of her prognosis of a median survival of 11.1 months, the patient reached out for the possibility of adding Salmonella-IL2 to her treatment regimen. Thus, 5 months after starting the chemotherapeutic regimen, receiving approval for a n=1 investigational new drug application from Health Canada and approval from the Research Ethics Board (REB) of the Jewish General Hospital and the faculty of medicine research of McGill University in Montreal, Quebec, Canada; the patient started a regimen of every 2 week oral Salmonella-IL2 given concomitantly with her chemotherapy for a total of 6 cycles. If a response was noted, the treating oncologist could opt for continued administration of Salmonella-IL2 every 2 weeks indefinitely. To evaluate the patient’s response and to monitor for potential toxicity, scheduled visits with her oncologist included the following: CA19-9 evaluation, complete blood count, comprehensive metabolic panel, periodic MRI of chest and abdomen, and blood drawn for flow cytometric analysis sent to MD Bioscience, Oakdale, MN.

Upon diagnosis, the patient’s CA19-9 level was markedly elevated and there was a response to FOLFIRINOX over 5 months with a plateauing of the CA19-9 level to 75-100 kU/L for one month (Figure 1). In addition, by month 6 she began to experience severe neurotoxicity from oxaliplatin as manifested by absence of feeling in both her hands and feet, therefore it was stopped. At month 5, Salmonella-IL2 was added to her treatment regimen and by the 6th month, her CA19-9 normalized and has now stayed in the normal range for the last 11 months. Furthermore, periodic magnetic resonance imaging revealed overall reduction in size of the primary pancreatic mass from 5.4 × 3.4 cm to 4.9 × 2.2 cm. In addition, there were interval decreases in the size of the hepatic metastases from an average of 1.7 cm in greatest dimension to 1.1 cm. The MRI also revealed that there were no new metastatic lesions in the liver or elsewhere and the signal intensity of these metastatic deposits was appreciably much less than when the patient initially presented. Lastly, flow cytometric analysis of peripheral blood performed every two weeks prior to administration of systemic chemotherapy has demonstrated a significant increase in the CD56bright NK cells when compared to baseline. CD4 T cells also have demonstrated a significant increase however; there has been no decrease in the other major cell populations despite the cytotoxic chemotherapy (Figures 2 and 3). Lastly, although there was no PET scan obtain at diagnosis, a scan obtained at month 14 did not demonstrated any metabolic activity in the metastatic tumor deposits. 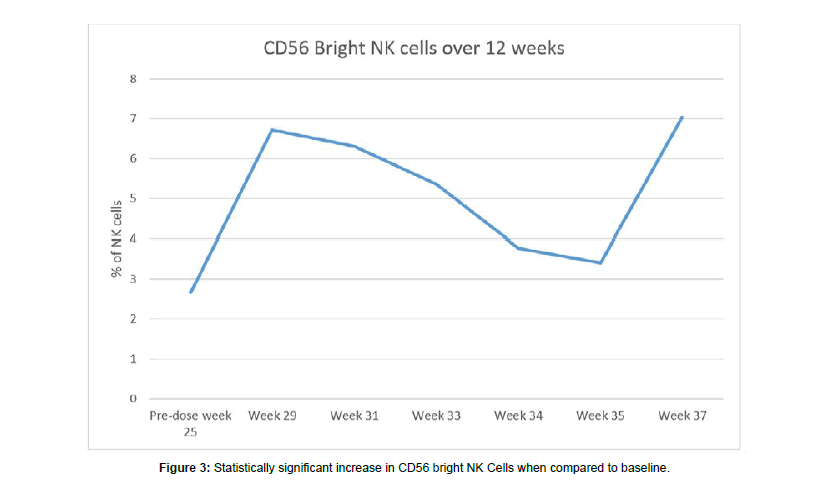 The patient has not reported any adverse effects from the Salmonella-IL2. Namely she has not had any fevers, diarrhea, nausea, or vomiting. Stool cultures obtained after an episode of diarrhea at approximately week 48 did not reveal the presence of Salmonella. Typically, treatment of metastatic pancreatic cancer with FOLFIRINOX demonstrates a therapeutic response for approximately 6 to 8 months and then the majority of patients experience a significant progression of their disease with median survival of 11.1 months [10-12]. In this case, despite eliminating oxaloplatin because of the neurotoxic side effects, now at month 15, the patient continues to feel well and is vigorously participating in activities of daily living. Furthermore, given this response seen in her CA19-9 levels and radiologic response, it was decided to continue Salmonella-IL2 for the time being.

In addition, this report outlines the first use of Salmonella-IL2 in a multiple dosing strategy in a patient with metastatic pancreas cancer. Pre-clinical studies demonstrated synergism between Salmonella-IL2 and doxorubicin and various mechanisms for this synergism have been suggested. This patient demonstrated a significant increase in CD56bright NK cells, which have been shown to be one of the major subsets infiltrating some cancers and upon cytokine stimulation of this cell line, can undergo a significant differentiation into a highly cytotoxic NK cell. Despite having to stop a major component of the chemotherapeutic strategy, namely oxaloplatin, flow cytometry revealed that immunologic cell populations have been maintained. With these encouraging results, an expanded multiple dose Phase II trial of Salmonella- IL2 trial of up to 60 patients with metastatic pancreas cancer will be initiated.