2Faculty of Technology, University of Banja Luka, Republic of Srpska

In this study, we tested five woven fabrics and observed their virtual drape behaviors. Fabrics’ mechanical properties were measured by Fabric Assurance by Simple Testing (FAST) system and simulations were created by O/Dev simulation software by Optitex. Drape behaviors of fabrics on a circular disc model were simulated and obtained virtual drape images were processed by image analysis software to calculate drape parameters. The purpose of this study is to understand the visual perception of people when looking at a fabric drape simulation. Which feature of drape is actually more significant to human eye? A psychophysical test was developed to understand human selectivity for drape geometry in virtual environment. Finally, 27 participants’ psychophysical test results were compared to calculated values. Participants found to be most sensitive to evenness and placement of folds while they were least sensitive to fold sizes.

Fabric simulation is a complex phenomenon when compared to other materials simulation. Fabrics exhibit a non-linear, viscoelastic behavior even under very low forces which make the mathematical modelling behind simulation complicated [1]. Simulation of fabrics is very important for several industries such as animation, game and apparel. For apparel industry, fabric/garment simulations are particularly important from two perspectives: product development and online shopping [2]. Prototyping is a time consuming and expensive stage for product development. Sometimes three or four prototype is prepared before production to make sure that the garment meets the required aesthetic and physical fit. A realistic simulation may help manufacturers to minimize the number of prototypes. Online shopping is the other perspective where fabric/ garment simulation is outstanding [3]. Online apparel shopping is growing since 2000’s. However, consumers suffer that they cannot estimate how the garment will look and fit on their own body while purchasing in front of a computer screen [4]. Therefore, the main issue for online apparel shopping is the garment fit. A realistic garment fit simulation should meet the consumers requirements. Current studies concentrate on 3D scanning consumers and virtually dressing scanned images by simulation software to create a realistic experience. Consumer can observe the virtual garments on their own body model by some commercially available software. Optitex is one of the companies offering simulation software. This software enable users to insert fabric properties (such as bending rigidity, shear rigidity and extension) to create the most accurate and realistic simulations [5].

The main issue with simulations has been always the reality and accuracy so far [6,7]. However it is also important to understand what people see when they look at a virtual image. How sensitive they are to virtual stimuli where the stimuli are a virtual fabric? In this study, we aim to understand the visual selectivity of consumers to drape behavior of fabrics in virtual environment. In real context, fabric drape properties are generally measured by drapemeters [8]. Cusick’s drapemeter is one of the commercially available, easy to operate and inexpensive instruments [9]. In real drape meter testing, a circular fabric lay on a disc and drapes over it freely. In this study, we 3D modeled the disc of a drape meter by 3ds Max and virtually draped fabrics on the created disc model in O/Dev software by Optitex. Simulation images were saved and processed by image analysis software (ImageJ) to calculate virtual drape parameters. After quantitatively measuring virtual drape parameters we used a psychophysical test to understand consumers capability to distinguish drape behavior of virtual fabrics. As each measured drape parameter corresponds to a drape property (for example; drape coefficient, DC, corresponds to drape of the fabric. Lower DC values usually indicate a more drapery fabric), we tried to see if participants were successful to identify the variations of drape parameters.

“Drape” has been a long-term discussed phenomenon in textile researches as it directly effects fabric assessment and garment fit. Drape is the hanging behavior of a fabric under its own weight [10]. Another definition of drape is the orientation capability of textile material into eye pleasing folds under gravity [11]. Since “eye pleasing” is a subjective notion, researchers have developed a “drape meter” to measure drape properties objectively [9]. Drape coefficient (DC) is one of the significant parameter, which can be measured by drape meter, and gives an idea about the fabric drape behavior. However, DC is not enough to judge drape behavior of a fabric as two different fabrics might have same DC values. Therefore, additional drape parameters are required to understand drape behavior of fabrics deeply. Three items are important for drape geometry. These items are: drape area, fold number and fold shape [12]. Over time various drape parameters were suggested to measure geometry of drape. Some of these parameters are employed in this study. “Circularity” (CIRC) of drape is a parameter to establish proximity extent of drape shape to a circle [13]. Jevsnik and Zunic-Lojen used “angle between two neighboring peaks (α)” as a drape parameter [14]. In this study we calculated “standard deviation of angle between neighboring peaks (SD PA)” to assess evenness of fold placement. To best of our knowledge, governing SD PA as a drape parameter is new to literature. “Node severity” (NS) is a drape parameter to analyze fold sizes. It is the ratio of node height (wave height) to node width (wave length) [13]. Node height (NH) is radius from the center of supporting disk measured in centimeters and node width (NW) is the angle between neighboring peaks [15]. “Mean node severity” (MNS) is used for measuring node size of the overall drape profile. Each node has a different size and their size variation gives an idea about the uniformity of the nodes in a drape profile. A larger variation indicates non-uniformity of node sizes. Variability of node severity was initially used by Robson and Long and determined by standard deviation of node severity [13].

Psychophysics is a science to understand human reaction to various stimuli. During a psychophysical testing, participants are exposed to a stimuli and their reaction is measured by several methods. Ranking is one of these methods [16]. Participants are asked to rank the samples in an order according to the dimension that’s being questioned. In this study, “images (pictures) of virtually draped fabrics were used as stimuli.

Five different woven fabrics were used in this study to observe their virtual drape behavior. Selected fabrics weights ranged between 168 to 215 g/m2 , four of them were 2/1 twill weave cotton and cotton blend fabrics while one of them was 100% wool fishbone weave fabric. The selected fabrics were quite similar in weight, weave and thickness. The reason of doing so was that participants are expected to easily distinguish drape differences of very different fabrics. However it is critical to understand the selectivity of individuals for similar fabrics.

After selecting fabrics, mechanical properties of them were necessary to create virtual fabrics in O/Dev software. Therefore, Fabric Assurance by Simple Testing (FAST) was used for measurement [17]. FAST involves a set of instruments to measure tensile, compression, bending properties of fabrics. Measured mechanical properties were converted to O/Dev validated units by “fabric editor” tool available in the software.

To create fabric simulation, 36 cm diameter circular patterns were prepared in 2D pattern design system (PDS) module of O/Dev. After inserting O/Dev validated mechanical properties of the fabrics to the software, fabric simulations were achieved on virtual disc shown in Figure 1. The simulation parameters were kept as default offered by the software (size of time steps: 0,02 and number of time steps: 10). The simulated drape images were saved from 5 different views (front, back, left, right and top). 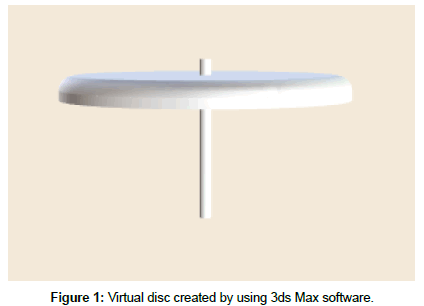 As mentioned in literature, there are many different drape parameters to identify drape behavior of fabrics. Drape parameters used in this study and what they actually represent are given in Table 1.

After calculating drape parameters of virtual fabrics, we showed fabric drape simulations to 27 participants. Participants were the volunteers from college (students, professionals) and their ages were between 18 to 65. Only female participants were asked to attend the study as gender is thought to be a significant factor for psychophysical testing.

The virtual stimulis were the simulation images of five virtual fabrics from five different views as demonstrated in Figure 2. A questionnaire was developed for this research study. The questions included a definition of drape parameters. For example we explained what “similarity of folds” to participants with presenting them below paragraph. Similarity of folds” is the comparison of fold shapes for each image. There occur several folds on a fabric sample when fabric hangs freely. The shapes and the sizes of these folds may vary. Similarity of folds is said to be high when the fold sizes and fold shapes are similar. 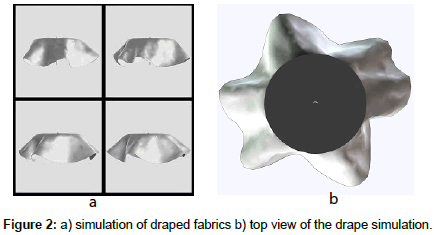 Figure 2: a) simulation of draped fabrics b) top view of the drape simulation.

FAST measured mechanical properties of test fabrics are given in Table 2. Calculated drape parameters of simulations, are given in Table 3. Participants answers to psychophysical test were analyzed by descriptive statistics. True rank order of each parameter was determined according to Table 3.

In this study, fabric drape simulation images were used as stimuli and participants’ capability to capture variations of drape features were analyzed psychophysically. Participants’ success rate for ranking circularity, drapery, average fold size, similarity of folds and placements of folds were 31, 25, 10, 57 and 51% respectively. As similarity of folds and placements of folds are a function of “evenness analysis of a shape”, results indicate that subjects are more sensitive to the changes regarding evenness. However, they were not very sensitive fold sizes. Surprisingly the subjects were not very selective of drapery differences. Nevertheless, it should be noted that the drapery was only considered according to DC values in Table 3. However it is a fact that different fabrics might have same DC values. Therefore, DC value may not be enough to justify the drapery ranking of samples. Finally, subjects were somewhat sensitive to distinguish circularity of fabrics. This study was done by only considering five woven fabrics, however more fabrics and more participants might give more reliable results. The participants’ demographic differences might be also considered for further studies.