Sexually Transmitted Infections among Sex Workers and Their Clients in Cotonou (Benin) in 2015: Prevalence and Risk Factors

Introduction: In the spread of sexually transmitted infections (STIs), the most vulnerable populations are sex workers (SWs). The objective of our study was to determine the prevalence and risk factors of STIs for SWs and their clients in a hospital in Cotonou, Benin.

Methods: A cross-sectional and prospective survey was conducted at the STI clinic in Cotonou, from November 2014 to April 2015. SWs and their clients who consulted in the clinic were included after informed consent. The diagnosis of STI was essentially based on the syndromic approach.

Sexually transmitted infections (STIs) are a major public health concern in developing countries. They are increasing with the advent of human immunodeficiency virus (HIV) infection, particularly in sub-Saharan Africa. Sex workers (SWs) are the most vulnerable population [1,2].

The aim of our study was to determine the prevalence and risk factors of STIs in SWs and their clients in a hospital in Cotonou, Benin.

A cross-sectional and prospective survey was conducted at the STIs clinic in Cotonou, from November 2014 to April 2015. The STI clinic is currently the reference center for the care of SWs and their clients in Cotonou. The SWs and their clients who consulted in the STI clinic for any reason were included with their informed consent. The diagnosis of STI was essentially based on the syndromic approach. Further medical tests were requested when necessary. Retroviral serology was performed free of charge for all included patients. Recruitment was based on a thorough sampling. The data collected with a survey form were analyzed with the Epi Info 7 software, which received the approval of the local ethics committee. Anonymity and confidentiality were respected in the processing of files.

Table 1: Prevalence of STIs developed by SWs and their clients attending the Health Center of Cotonou I from November 2014 to April 2015.

The limitations of our study were:

the small number of clients

The veracity of statements, especially relating to sensitive issues;

The absence of certain data, in particular the para-clinical tests to confirm the etiological diagnosis of STIs. This was justified by the lack of financial resources, which led us to rely more on the use of the syndromic approach.

Despite these limitations, we were able to achieve the pre-set goals.

The prevalence of STI / HIV was still high despite the control strategies applied by various institutions. This result confirms the probable existence of behavioral, cultural and psychological barriers to the accurate implementation of these programs [1,3].

SWs with a low level of education (62.6%) had the highest rate of STIs; P=0.05. On the one hand, it is difficult for these SWs to understand and comply with the various prevention methods and, on the other hand, they have an inferiority complex compared to the clients, which makes them to be easily influenced [1,3-5]. This influence of clients could be counteracted by the technique of condom negotiation with their clients and / or the systematic use of the female condom by the SWs.

Trade was the main activity of the SWs (83.8%). Because of their low level of education, this activity is the most accessible to them. In addition to increasing their income, this activity allowed them to recruit their clients by multiplying contacts. Traders thus represent a target population in the general population, for STI / HIV control strategies [1].

The large majority (80.9%) of the SWs had boyfriends with whom they rarely used the condom. This could be justified by a relationship of trust between the two partners, leading to a decrease in vigilance and the adoption of risk behaviors by the SWs. This demonstrates the important role of “boyfriends” in the spread of STIs [2]. Clients, on the other hand, often did not use the condom regularly with SWs (67.3%). In the absence of condom protection, the prevalence of STIs was higher among SWs (91%) and their clients (97.8%); 0.0005 ≤ p ≤ 0.0003. The lack of condom protection is a constant risk factor in STI/HIV transmission [2,6]. Moreover, more than half of the clients were married and never used condom with their spouses. A proportion, though minor (3.5%), of SWs, was married. All these factors contributed to an increase in the prevalence of STIs / HIV in the overall population, especially when account is taken of the reality of polygamy in Africa [4,6].

Clients and “boyfriends” would thus be a bridge in the transmission of STI / HIV to the general population. They form a transmission network (Figure 1) of STIs / HIV between high risk groups and the general population through unprotected sexual relations with SWs and other non-SW partners [6]. Strategies must therefore be reinforced or carried out both within the core group and at the level of the bridge populations. 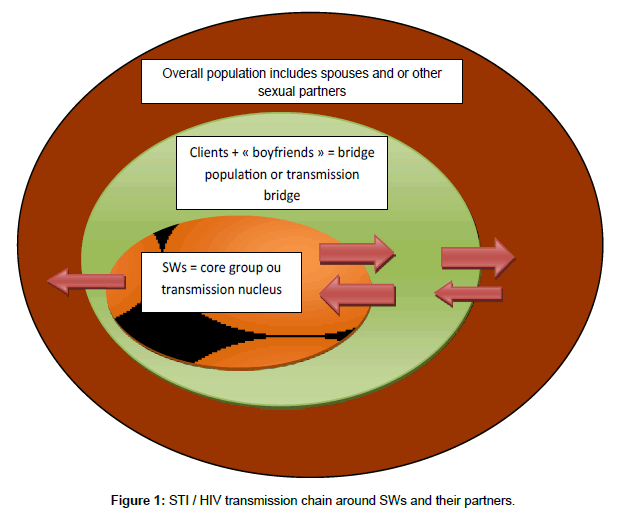 Figure 1: STI / HIV transmission chain around SWs and their partners.

Although the large majority of SWs (77.7%) reported regular condom use with their clients, the prevalence of STIs / HIV in SWs was high. This seemingly contradictory result leads us to make several hypotheses:

Untruthfulness of SWs’ statements especially when comparing the low condom use rate (32.7%) admitted by clients

Existence of another contamination source, especially “boyfriends” with whom they have unprotected sexual relations [2]

Possibility of breaking or sliding of condoms during sexual intercourse [2]

To a lesser extent, other non-genital sexual practices [5]

Possibility of bacterial resistance to the usual antibiotics [5]

Clients and boyfriends were a bridge population for the transmission of STIs in the general population. Control strategies must therefore, besides SWs, include traders and bridge populations. These strategies should set the focus on the barriers to the use of male condom, and promote the systematic use of female condom through appropriate approaches.

The authors declare no conflict of interest. All authors agree to the publication of this article.