Exercise is a stressor that is known to in some cases suppress antimicrobial protein levels, particularly secretory immunoglobulin type A (IgA). Athletes in the midst of in-season training often demonstrate declining levels of sIgA as well as increased risk for ailments such as upper respiratory tract infections. Therefore, it is important to investigate natural supplements that may enhance post exercise mucosal immune function. Twenty healthy collegeaged males volunteered to participate in the present single blind, repeated measures study. Three treatments were administered (botanical spray, botanical drops, placebo) at the onset of 30 Min of 80% VO2 max cycle ergometer exercise. Secretory IgA and Human Alpha Defensin were quantified in saliva samples 30 Min and 90 Min post exercise. Analysis via repeated measures Anova revealed a significant treatment effect at 30 min (p=0.030) with post hoc testing revealing a difference between the botanical spray and placebo (p=0.027), but by 90 Min there was no differences by treatment (p=0.758). There was no difference by treatment observed at either 30 or 90 Min for human alpha defensin concentrations. Based upon these preliminary data, it appears that a single dose of the tested botanical blend delivered via mouth spray can increase sIgA, one of the primary anti-microbial proteins in the oral cavity, for a short time post exercise.

Exercise is a known stressor that has influence over many different physiological systems in the body. There is evidence in the literature that long-term training in athletes can negatively affect antimicrobial protein levels in the oral cavity [1]. Furthermore, it has been reported that athletes face a higher incidence of upper respiratory tract infection (URTI) compared to more sedentary individuals [2]. Based upon the reports in the literature, it is understood that long-term training for sport performance is a stressor that can both elevate physiological potential for in the athletic arena, but may depress function in other system. Moreira et al. [3] reported that a 2-week detraining period after a competitive soccer season attenuated secretory IgA (sIgA) suppression and symptomology of URTI due to training. From this study it can be suggested that mucosal immunity can quickly rebound if rest and recovery are allowed for athletic populations. However, with the demands placed upon athletes, reduced mucosal immunity and risk for URTI are likely to remain an issue into the future.

It has also been determined by previous research that certain forms of acute athletic performance and exercise have the ability to suppress immunoglobulin secretion in the oral cavity [4-6]. However, most of these exercises are long duration and aerobic, the evidence for the changes in antimicrobial protein with short-term intermittent exercise is less clear with some evidence suggesting no change in immunoglobulin type A [7]. Additionally, Li and Gleeson [8] reported that 60% VO2 max cycling for 2 hours did not negatively impact sIgA secretion rates. However, MacKinnon and Jenkins [9] had previously reported a decline in sIgA with intense interval exercise (0.075 g*kg-1) on a cycle ergometer. Though there is much study yet needed to fully elucidate the responses of antimicrobial proteins in the saliva with all forms of exercise there is enough evidence that further study is warranted particularly regarding methods to increase antimicrobial protein levels. Additionally, recreational exercisers represent a larger population overall as compared to athletes and are engaged in exercise to benefit health and wellness. If these individual are experiencing reductions in anti-microbial protein levels any potential treatment would be beneficial for a large number of persons.

Some botanicals, such as baker’s yeast beta glucan, have been shown to increase sIgA in saliva and help decrease symptoms of cold and flu post exercise [10]. Shiitake mushrooms are another natural food substance that is known to contain beta glucans, which may be beneficial for human health [11]. Shiitake mushrooms have been demonstrated to have anti-oxidant activity post exercise, but no evidence currently exists to examine changes in oral anti-microbial protein levels post exercise [12]. Therefore, the purpose of this initial investigation was to examine the effects of a botanical supplement on secretory immunoglobulin A and alpha defensing levels post-exercise.

The study was a within subjects, repeated measures, single blind, placebo controlled, cross-over design. After initial data collection for anthropometrics and maximum aerobic capacity, subjects were randomly assigned an order of treatments. The treatments consisted of two administration methods of the botanical product and a saline placebo solution. The subjects engaged in exercise sessions after the administration of each treatment and saliva samples were taken at 30 minute and 90 Min post exercise to examine antimicrobial protein levels of secretory IgA and human alpha defensing (NHP1-3).

For the study 20 apparently healthy male subjects were recruited to participate (Table 1). The subjects gave written informed consent prior to initiating the study. The institutional review board at the University of Louisiana at Lafayette approved the study methods.

On the first visit the subjects had basic anthropometric information collected, followed by the administration of the Leisure and Physical Activity survey to determine exercise and sedentary habits (Table 2) [13-15]. Height and weight was collected via a standard triple beam balance physicians scale with stadiometer. Following this assessment, a 3 site skinfold analysis will be undertaken to determine body fat percentage [16].

Following this assessment the subjects underwent a tests of maximum aerobic capacity administered on a cycle ergometer with inspired gases monitored, and practice giving a saliva sample into a cryovial.

In brief, this test consists of pedaling at a cadence of 60-80 rpm on an electronically braked cycle ergometer (CosMed E100 P/K) on which the workload is increased 25 watts every minute until the participate voluntarily stops exercising or their oxygen consumption has ceased increasing as determined by computer data assessed in real time [17]. Expired gases during the test were monitored with a CosMed CPET system that had been calibrated to the manufacturer’s specification. This system employs paramagnetic O2 gas sensors (listed accuracy of ± 0.02%) and NDIR CO2 gas sensors (listed accuracy ± 0.02%) in addition to a bidirectional digital turbine to assess flow (listed accuracy of ± 2%). The system was set to breath by breath measurement and to maximum aerobic capacity was determined in a similar fashion to previously published work in our lab [14,18,19]. To determine the workload during the subsequent exercise trials 80% of the wattage on the cycle ergometer at VO2 max was calculated.

The next 3 lab visits were conducted in the morning hours (arriving before 0800). The participants reported to the lab in an overnight fasted state without having brushed their teeth. The exercises for these visits were a 30 minute cycling protocol at 80% of the maximum workload (in watts) achieved during the test of maximum aerobic capacity. The participants provided a 30 min and 90 min post exercise saliva samples (~ 2 ml total volume per collection, 3 minute timed collection) into pre-weighted cryovials. Prior to each exercise session the participants received one of three treatments in a random order. The treatments consisted of dilute saline solution to be sprayed in the oral cavity (small manual squirt bottle), a botanical solution in droplet form or in oral spray form.

The saline solution was composed of approximately a 0.3 Molar NaCl solution in the same dispensing spray bottle as the botanical was administered in. The subjects were aware of the difference between drops and spray administration but were blinded to the contents of the actual treatments.

Saliva was collected for 3 Min into pre-weighed cryovials. At the conclusion of 3 Min the vials were re-weighed to determine the weight of saliva collected. A density of 1 g/ml was assumed and flow rates for saliva were calculated for each collection. Participants practiced this procedure during the initial lab visit to become familiar with the procedure.

After collection the saliva samples were frozen at -35 degree Celsius in a dedicated freezer in a secure laboratory with limited access. Prior to analysis the saliva samples were allowed to come to room temperature and centrifuged at 1500 g for 15 Min. Commercially available ELISA kits were used to quantify the levels of salivary Immunoglobulin type A (SIgA ELISA Assay kit, Eagle Biosciences INC. Nashua, NH USA) and Human Alpha Defensin (HNP1-3 ELISA Assay, Hycult Biotech INC. Plymouth Meeting, PA USA) in the saliva. Samples were diluted according the manufacturer instructions prior to incubation on the microtiter plate to determine sIgA/HNP 1-3 concentrations. Previously published work on human alpha defensin, and pilot testing in our lab suggested a 1:1000 dilution was appropriate to for saliva samples and the selected immunoassay [20]. All assay were performed according to manufacturer instructions and QC were within normal ranges.

Analysis of secretory IgA at 30 and 90 Min post exercise, as well as HNP 1-3 at the same time points, revealed non-normal distributions (W>0.503, p<0.001). Therefore, these data were log transformed prior to further analysis. 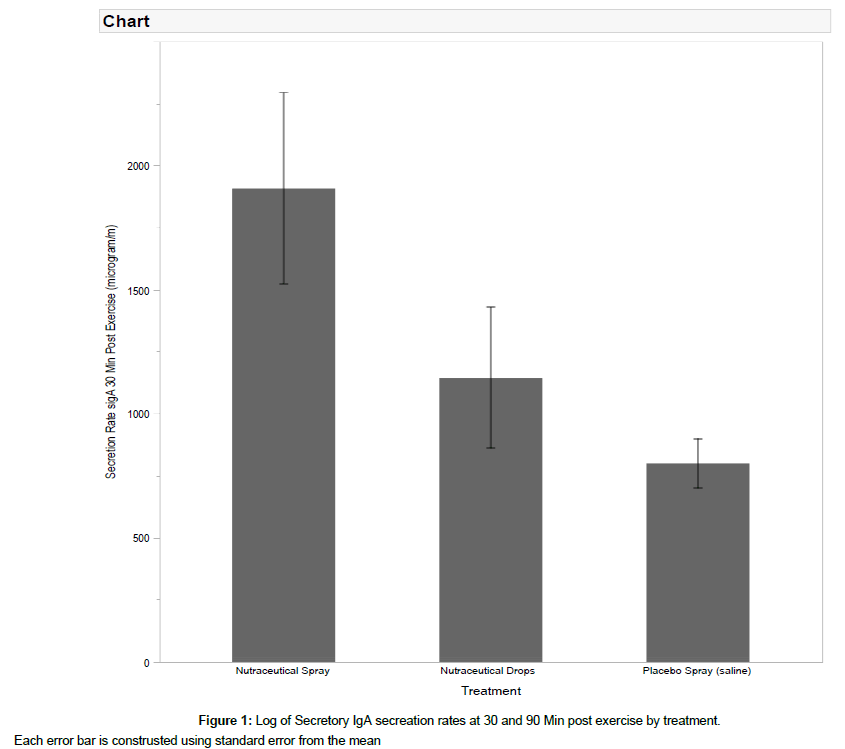 Each error bar is construsted using standard error from the mean

Based upon these data a single dose of the tested botanical mixture was effective at increasing sIgA secretion rate post exercise as compared to placebo at 30 Min. It is likely that the 90 minute sample was too far from the initial dose (~ 120 min from the administration of treatment) to have measured any change. The study does not suggest that human alpha defensin levels were augmented as a result of any of the treatments. Given that sIgA is considered to be very important for protection against URTI [21], and that these infections are found more prevalently in exercising/athletic populations the botanical studied might provide useful protection for athletes either recreational or professional.

Many of the components of the botanical are antimicrobial or antibacterial themselves, including oregano oil [22] and some components such as willow bark have reported analgesic and antiinflammatory functions [23]. Additionally, a few of the ingredients have demonstrated immunostimulatory functions, which lend credence to the observations from the present study. Milk thistle (Silybum Marianum extract) has been shown to increase cytokine expression (IL-4, IL-10) and have an immunostimulatory effect in vitro [24]. Grape seed extract has been found to be able to stimulate lymphocyte transformation, increase lysosomal activity and phagocytic capability of macrophages [25]. Additionally, shiitake was found to improve human immunity in a randomized dietary intervention on similar aged subjects [26].

The present study represented an initial step in evaluating this botanical blend as a method to enhance mucosal immunity postexercise. Given the known decrements in mucosal immunity post exercise [1,4,5,12,26] it is important to study substances that might provide benefit in these instances. Additionally, professional sports teams whose athletes’ train nearly all year might be in a state of immunosuppression [27] and thus products that could potentially enhance mucosal immunity would be important to help reduce lost playing time due to URTI. The results of the present study are promising, however, the botanical was examined for post exercise effect only and only cycling exercise was tested. Further study with a higher frequency of sampling and more variety of exercise modes is warranted to confirm and expand upon this initial investigation. Additionally, it should be noted that due to the nature of the product, it is not possible to speculate on which component of the mixture was the candidate molecule that effected the sIgA, or if the supplement could affect other immunoglobulin levels. Additionally, work would need to be done to evaluate the components of the blend separately to determine which was the effective component. Finally, the delivery method was based upon the currently available delivery mechanisms for the tested supplement and may have influenced the results.

The present study provides some preliminary evidence that the tested botanical blend can increase sIgA response post-exercise. Further study will be needed to more clearly define the effectiveness of this supplement, and if additional doses post-exercise are warranted to keep levels of immunoglobulins elevated longer. Additionally, further work is needed to determine which component of the mixture caused the noted effect in sIgA.

The present study was funded by a research grant from BioBotanical Research Inc.