The Use of Advance Dermaplaning in Clinical Skin Care and Treatment

Skin barrier function is important to the function and appearance of the skin. Without adequate hydration, the process that normally causes surface cells to shed is disrupted, resulting in flaky, itchy, dry and inelastic skin which can lead to barrier dysfunction. Adequate moisturizing is essential to treating skin with eczema. Treatments such as corticosteriod topicals and emollients cannot be effective in limiting flares of eczema if they cannot reach the skin surface due to barrier dysfunction. Exfoliation is beneficial for removing keratinized skin cells that disrupt normal barrier function. Advanced Dermaplaning is a new approach to exfoliation of the skin, in real time. The addition of Advanced Dermaplaning to the treatment protocol of persons with excessive cellular buildup or atopic dermatitis, can be useful in instantaneously removing the cellular blockage that prevent effectual topical treatment applications and their efficacy.

Sixty-six-year-old woman presented for rejuvenation of her skin. Her primary concerns were dehydration and hyperpigmentation. She had regularly seen her dermatologist for the treatment of eczema on her left ear, a condition that she had been living with for several years. She had been treating the ear with prescription steroid topical treatments as prescribed by her dermatologist [1]. However, the condition persisted.

At her initial visit, it was observed that the entire front of the ear was almost completely covered with a proliferation of dry, flaky cellular debris. The actual skin tone was barely visible. The ear was primarily opaque white in color, resembling powder in appearance [2,3] (Figure 1,2). Figure 1: Representative of the appearance of the front of the ear thirty days from the first visit. Extreme reduction in epidermal buildup. Tragus, concha and triangular fossa of antihelix Advanced Dermaplaned, loosening and lifting epidermal buildup. Figure 2: Loosening epidermal buildup and product residue from the underside of tragus and antihelix. Used 10 and 10-R gauge scalpels.

During the consultation, she indicated that her ear became impacted several times per year, due to her own attempts to cleanse the ear or to remove cellular debris from the ear canal. As a result, she routinely made visits to her ear, nose and throat physician for irrigation or mechanical removal of debris in the canal to prevent further blockage.

Advance Dermaplaning is a non-invasive procedure that aids in achieving maximum exfoliation of the epidermis, virtually anywhere on the body. It helps to illuminate the skin more effectively for skin analysis, determining treatment protocol and may aid in promoting optimal post-treatment results [4]. The procedure is safe, noninvasive, pain free and can be provided for each skin type and Fitzpatrick. There is no downtime. It can be a stand-alone treatment or pre-treatment. Advanced Dermaplaning is also an excellent treatment option for persons that cannot receive mechanicalmicrodermabrasion or chemical exfoliation due to adverse reactions or contraindications [5,6]. Aggressive exfoliation is one of the leading factors of compromised barrier function [7].

Advanced Dermaplaning is performed using a 10 or 10R-gauge scalpel [8]. The advanced procedure allows the physician, nurse or extensively trained and skilled esthetician to physically exfoliate the skin with much greater detail, including areas such as noses, ears, hands, body and even eyelids [8]. Advanced Dermaplaning is especially beneficial for persons experiencing atopic dermatitis or hyperkeratosis. Major improvements are noticed after a single treatment, including moisture retention, which has a significant impact on the structure and function of the skin and its ability to retain moisture [5,9].

With the tragus held slightly downward near the center, feathery strokes were made over the tragus with the blade held at an angle. The curve of the 10-gauge blade was used in this area.

In preparing to Advance Dermaplane the triangular fossa, the antihelix and concha, her head was placed comfortably at an angle that would allow cellular debris to fall away from the ear canal. With each of these areas, the curve of the 10R gauge blade was used to carefully and skillfully loosen and remove the cellular debris.

With her head still resting at an angle, a slightly damp konjac sponge was used to make circular motions around the entry of the ear canal. This loosened the debris. A moist konjac sponge was then used to cleanse this area, while capturing most of the dry cells onto the sponge in the process. Moist cotton swabs were also used to capture residual skin cells.

Once the entire ear was clear of cellular debris, the ear was cleansed with an anti-bacterial cleanser, hydrated with hyaluronic serum and fragrance-free sun protection was applied [9,10].

The results from Advanced Dermaplaning at this visit were very gratifying for this woman. Her entire ear was free and clear of all cellular debris and accessible. Skin tone was restored and no longer hidden. Skin texture was smooth and soft with enhanced appearance. She showed no signs of ill results or trauma and displayed minimal erythema. This treatment not only improved her appearance, but prepared her skin for skin surface hydration (Figure 3). 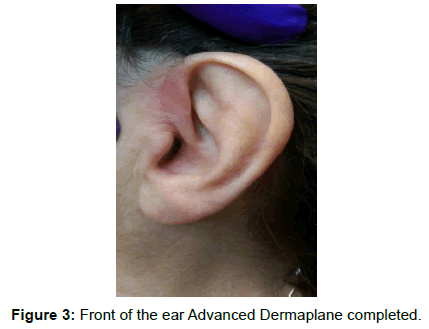 By removing cellular debris proliferation, there was also the ability to palpate the affected skin and perform a more thorough visual assessment [3]. Dehydration was visible. Due to strong water-binding potential, hyaluronic acid was applied [10]. She experienced no stinging sensations or burning. This helped to aid in dehydration itch, as well. Her overall skin response to corrective hydrating treatments was successful [1] (Figure 4). 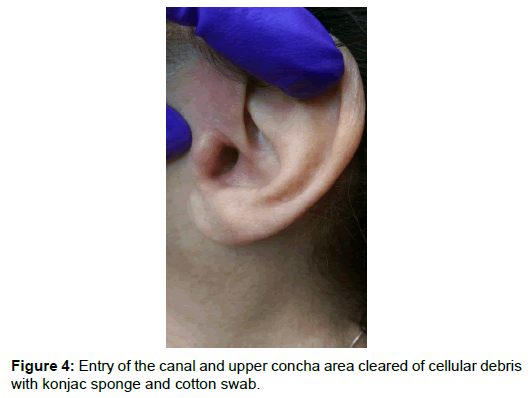 Figure 4: Entry of the canal and upper concha area cleared of cellular debris with konjac sponge and cotton swab.

It was recommended that she return monthly for Advanced Dermaplaning to ensure that this condition would not reoccur at the level to which it appeared prior to this procedure. Education regarding home skin health measures for the treatment of eczema were discussed in detail including water consumption, environmental factors, and skin barrier support [1,3,9,11]. 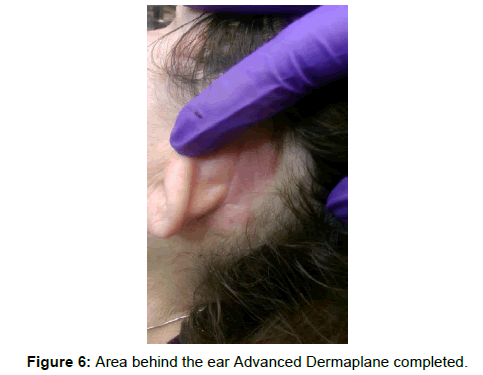 In this case, due to excessive epidermal proliferation, product application, surface hydration, and penetration was ineffective, including prescription topicals [1,3,11]. Advanced Dermaplaning eliminated the cellular buildup on the epidermis in an effective manner that did not injure or disrupt the skin barrier, in real time. Advanced Dermaplaning also restored the stratum corneum normal function allowing adequate skin hydration instantaneously [3]. The procedure resulted in smooth, hydrated skin and the alleviation of several of the symptoms associated with eczema including dry patches, flaking, itching and irritation [12].