We encounter cases of spinal dysraphism in our hospital very frequently. There is no documented evidence on the total number of population affected with Spinal Dysraphism available in our area .This prompted us to conduct the clinical study of spinal dysraphism cases in Rangaraya Medical College , Kakinada , Andhra Pradesh.

In India, neural tube defects are the most common congential abnormality noted in every corner of the country in all communities. Most of the mothers are primi gravida with poor awareness of preconceptual supplementation. In our country inspite of regular government run programmes of mother & child care, we get to see these cases very often. There is lot of apprehension post birth of an abnormal child in the family.

Materials & Methods: This is a Prospective Longitudinal study. All patients with complaints of spinal dysraphism coming to the department of neurosurgery , GGH ,under Rangaraya medical college kakinada during the period of October 2015- December 2017 were included in the study after taking informed consent from parents/guardians. All patients were analysed as per our study protocol.

Results: A total number of 30 patients have been included in the study. Preconceptual folate usage only in 2 , Prenatal folate usage in all patients ,Premature delivery in 8, Age of presentation was less than 1 month in 46.6% , Female infants more affected , Lumbar region was the most common site of presentation , Total paraplegia in 46.6%, Surgical outcome – 4 had hydrocephalus , 7 had respiratory infections , 12 had wound infection ,5 mothers had one previous abortion, other anomalies detected are Tetralogy of Fallot in one and single kidney cyst in one baby. Conclusion: Spinal dysraphism cases were frequently seen in clinical practice in GGH, kakinada. Majority were from low socioeconomic group of rural background with less awareness of preconceptual folate usage .Mothers with previous miscarriages had NTD in present child birth. Spinal dysraphism management and prognosis depend on early diagnosis and prompt treatment at the earliest.

Spina bifida or spinal dysraphism have been present as long as man has walked the planet. Anthropology excavations from 200 AD have shown spinal dysraphism findings from Mexico [1] varying degrees of dyraphism of spine have been evident for centuries,as indicated in Ferembachâ??s anthropology report [2] [Figure 1&2]. The first modern record of a child with spina bifida - incomplete closure of the neural tube - is from 1587, documented by dutch physician Peter Van Forest [3], though there is evidence that spina bifida existed in ancient civilizations well before the modern era.

In 1610 Van Forest performed the first recorded surgical resection of the myelomeningocele sac. The first illustrated example of spinal dysraphism appeared in a textbook entitled Observationes Medicae, first published in 1641Anatomic illustrations of spina bifida are first seen in Tulpius [4], described this lesson as â??nervorum propagines tam varie per tumorem dispersas (the prolongations of the nerves scattered in different directions through the tumor).

In the 1700s and 1800s great advancements were made in the understanding of spina bifida, its etiology, and its clinical consequences, spearheaded by Morgagni in 1761. Over a century later, Lebedeff theorized that myelomeningocele is due to a failure of the neural tube to close, and in 1886, von Recklinghausen described the types of spina bifida and the surgical treatments available.

The term spinal dysraphisma (also known as spina bifida, spinal defect, defect of the neural tube, open/cleft spine), was coined by B.W. Lichtenstein in 1940, [5] referring to a pleomorphic group of skin and neuronal disorders

Dutch surgeon and anatomist, Frederik Ruysch (1638-1731), published the first extensive spina bifida series, ten cases, in 1691 The surgical series of spina bifida patients, published by Fraser in 1929, looked at patients operated on between 1898 and 1923, and reported that two thirds were alive at hospital discharge, with 23% still alive at 6 years follow-up.

The major breakthrough in the treatment of children with spina bifida was the development of the ventriculoatrial shunt in the 1950s, ushering in the age of modern shunting and allowing for the treatment of hydrocephalus, which is almost uniformly associated with myelomeningocele.

Spina bifida literally means a spine in two parts or open spinea [6] Spinal dysraphism involves a spectrum of congenital anomalies resulting in a defective neural arch through which meninges and/or neural elements herniate leading to a variety of clinical manifestations [7]. They are divided into aperta (visible lesion) and occulta (with no external lesion). Meningocele, myelomeningocele, lipomeningomyelocele, myeloschisis and rachischisis are the usual names associated depending on the pathological findings.

The estimated incidence of spinal dysraphism is about 1 3/1,000 live births [7-9].The prevalence of spinal dysraphism has been on the decline world over in the last few decades due to better nutrition for women, folic acid supplementation, improved antenatal care and high resolution ultrasound for prenatal screening and biochemical markers. High prevalence noted in under developed & developing countries. Low prevalence noted in developed countries [9].

To study the epidemiological pattern of spinal dysraphism in the patients coming to Government General Hospital ,under Rangaraya Medical College , Kakinada.

1) To Study the epidemiological patterns of spinal dysraphism.

2) To evaluate the surgical treatment of spinal dysraphism.

3) To study the post-operative outcome.

All Patients with complaints of spinal dysraphism coming to the department of neurosurgery in Government General Hospital under Rangaraya Medical College, Kakinada.

A Prospective Longitudinal study conducted from October 2015 to December 2017, a total of 30 patients were included in the study after taking informed consent from parents/guardians.

2) Patients with open defect of the spine in midline Exclusion criteria:

â?¢ Patients with other forms of NTD occipital encephalocele

â?¢ Patients with only occult spinal dysraphism scars/discolouration/tuft of hair The following details were noted for all the patients

Table 4: Site of presentation of lesion.

In India the initial reaction of parents and family on seeing a newborn baby with a swelling in the back over the spine or open defect is a big fear, both for the sustainment of life of the new born and the future life of the baby. This anxiousness and fear immediately seek the help of the nearest available medical personnel irrespective of the place. They are then directed to a qualified neurosurgeon at the earliest from the local centre.

These days prenatal ultra-sonogram is giving information of the existing malformations prior to the delivery. Parents are then counseled for the necessary precautions and for terminations in unavoidable circumstances. With increasing awareness among the common public population, The following studies were used for comparing data & Analysing in our study [10].

There were 30 cases in the present study with age varying from 1 day to 10 yrs of age, with a mean age of 24 days. Its correlating with studies conducted in the Asian subcontinent [Table 7].

Premature deliveries were present in 8 children and term delivery in 22 children most of the babies weighed between 1500grams to 2500 grams, with most centred at 2000 +/- 200 grams.

Swelling in the posterior aspect of spine was the symptom of presentation for all the children. Ruptured swelling was present in 11 children. Out of 11, 8 had continous leak of CSF, 3 children had thick serous discharge from the swelling due to secondary infection. 4 children presented with signs of meningism [Table 9].

Table 9: Swelling in the posterior aspect of spine was the symptom of presentation for all the children.

Clinical presentation to the hospital - more than half of the children presented to hospital immediately within 1 week of child birth. Thereafter there was equal presentation in all age groups till the age of 10 years. [Table 10] [Clinical Photographs]

Table 10: Clinical presentation to the hospital Site Of Presentation - lumbar was commonest region, followed by sacral region. Dorsal & cervical regions had less frequency of presentation in our study [Table 12].

Degree of Lower limb paresis- complete paralysis had no improvement. Children with normal power of lower limbs have not deteriorated in our study [Table 13] [MRI Photographs]. Foot Abnormality - congenital talipus equino varus abnormality was noted in almost all cases of complete lower limb paralysis. Ortho paedician consultation was advised for children in the follow up period.

Table 14: Average head circumference of the child ranged from 34-38 cms.

Anterior Fontanelle was lax in children without any symptoms. In children with Arnold chiari abnormalites , post-operative hydrocephalus was noted. Anterior fontanelle served as single clinical criteria along with head circumference to monitor the CSF dynamics and diversion after primary surgery for the spinal dysraphism.

Table 15: Growth of Child/ Milestones were delayed in children with total paralysis of lower limbs. Family History of NTD was evident in 3 children, 24 fathers had addictions, and 2 mothers had addictions to local alcohol & smoking habits. Commonly seen were parents with 2 children in almost half of the study - with second child affected, 6 couples had 3 children with 3rd child being affected & for 8 couples the affected child was their first child [Table 18].

Age of Mother at Conceiving of the first child â?? the youngest was 16 yr old and 26 being the oldest mother. The average range of age of conceiving the affected child was 19-22 years. Abortions of Mother in Previous Pregnancies were noted in 8 mothers. 2 mothers had bad obstetric history [Table 21] [Chart 2]. 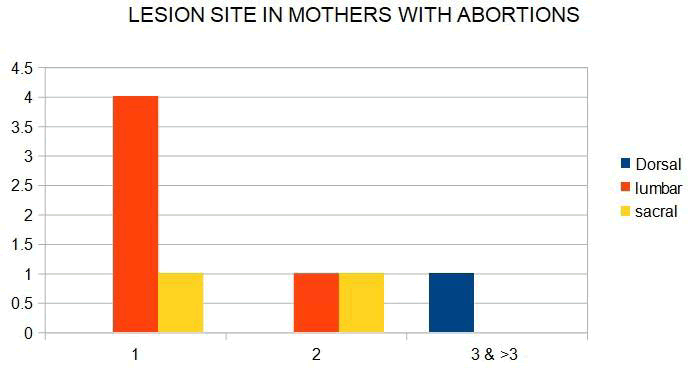 Other Anomalies detected were tetralogy of fallot and Single kidney cyst in one child each in our investigative follow-up [Table 23]. Picu Period of Stay Pre-Op/Post-Op: children with respiratory infections and low birth weight babies with failure to thrive were nourished in PICU pre operatively for necessary period and then taken up for surgery. Children with poor respiratory compliance were kept on ventilator in post-operative period for required time period. 4 children were shifted to PICU on grounds of aspiration. 6 children developed features of meningism and were treated in PICU till cured [Table 24] [Post OP Scar Pictures].

Table 23: Other anomalies detected were tetralogy of fallot and single kidney cyst in one child each in our investigative follow up.

Reconstruction of Flaps was performed with the assistance of our hospital plastic surgery department. Preoperatively the patients were consulted for neccesary intervention. A total of 4 patients out of 30 underwent reconstruction of flaps. There was infection in 2 children, subsided with intravenous antibiotics and local dressing care [Table 26].

Table 26: Reconstruction of flaps was performed with the assistance of our hospital plastic surgery department.

Degree Of Improvement - there was no improvement in cases with total paralysis of the limbs. In 3 children with reflex movements for pain stimulus, there has been one grade improvement of power. Not much significant improvement noted in the power of the lower limbs in the children with paretic limbs [Table 27].

Table 27: Degree of improvement – there was no improvement in cases with total paralysis of the limbs.

Complications attained were wound leak in 7 cases. Subsided in 6 cases with higher antibiotics (inj sulbacef, inj piptaz , inj meropenam) , local wound care & re- repair done in 1 patient. One child presented with recurance of the swelling in the suture site [Table 28].

Four children developed hydrocephalus in the post-operative period within one month of surgery for spinal dysraphism. Wound infection in occurred in 12 children. It was very high when compared with other studies. Staphylococcus aureus, pseudomonas & kleibsella were the organisms commonly isolated in the wound swab sent for culture & sensitivity [Table 29].

Follow Up: 24 children came up for follow up for atleast once and more than half of them were followed up for a period of 3-6 months. 3 deaths occurred. Lost follow up for 3 children after discharge from hospital due to various reasons [Table 30].

During follow up most of pre-operative deficits persisted, wound healing was delayed in children with post op infection.. Neurological developmental status and milestones were behind the expected age of development. Most of children could not walk due paresis.

Total Hospital Stay: average stay was about 3 weeks for children from admission to surgery and discharge.

Four children expired in our study due to various reasons. The deaths in other studies were as follows: [Table 31]

Table 31: The deaths in other studies.

Small sample size â?? the present study had only 30 patients.

Regional variation (rural set up of our hospital) â?? 80 % of our patients

Awareness among public by Anganwadi workers and mid wives Analysis for etiopathogenesis. Folic acid supplementation in preconceptual period has to be encouraged in fertile women.

Spinal dysraphism management and prognosis depend on early diagnosis and prompt treatment at the earliest. 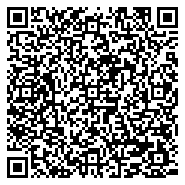