Snoring and Obstructive sleep apnea (OSA) are categorized as sleep disordered breathing (SDB) and together affect more than 25% of the adult population. SDB is caused by narrowing or collapse of the pharyngeal airway during sleep because of tissue crowding and reduced muscle tone. Partial obstruction of the upper airway leads to noise (snoring) created by air turbulence, while complete obstruction leads to the total cessation of airflow (obstructive sleep apnea). SDB is treated with the use of continuous positive airway pressure (CPAP) therapy which is generally well accepted by patients. CPAP provides positive pressure during the entire breathing cycle. In general it is thought that CPAP provides a stent like action which prevents the upper airways from collapsing [1,2]. In 1983, Mahadevia et al. [3], showed that the positive pressure during inspiration is not necessary to treat OSA, but a positive pressure during expiration in itself is adequate to prevent OSA. Such study lead to the introduction of the EPAP devices to treat snoring and OSA [4-9]. Current EPAP devices including Provent and Theravent, cleared by the FDA, have small valves that allow air to be inhaled with minimal resistance through each nostril, but during exhalation, air exits through a narrow opening with considerably more resistance. EPAP devices do not replace CPAP therapy but provide a new choice for patients who refuse to use CPAP or for more convenience during travel. EPAP devices have indeed been hailed as a great addition to the tools that are available to treat patients with SDB [10-12]. This is not surprising because at end expiration, upper airway is narrowest and most susceptible to collapse [13,14]. More recently a new EPAP mask designed as an expiratory resistance device was cleared by the FDA. The new EPAP mask is called “Optipillows EPAP Mask”, and consists of a nasal pillow type mask with a proprietary micro-valve that allows the user to inhale with minimal resistance and exhale against elevated resistance. The new EPAP mask is secured in place against the nostrils using light and comfortable head straps that can be adjusted to provide comfort while providing a seal against the nostrils. During normal breathing without EPAP device, inspiratory effort causes the pressure to become slightly negative potentially leading to upper airway collapse, causing the snoring noise or the sleep apnea. When an EPAP device is used, the pressure during expiration remains positive, stabilizing the upper airways and preventing or reducing any potential collapse that may occur when inspiration is initiated. The goal of this study is to describe the new EPAP mask and characterize the pressure that it generates.

Description of the EPAP mask and how it works 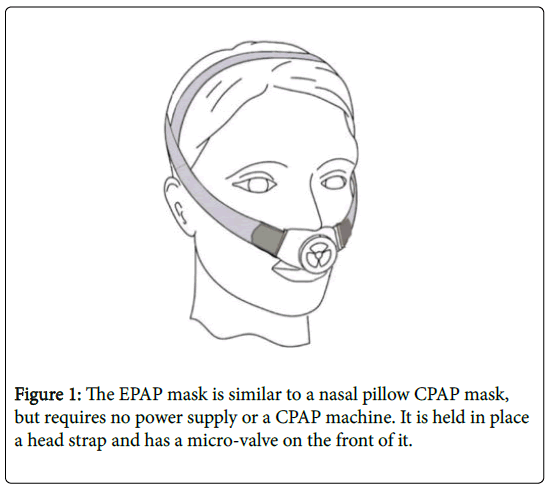 Figure 1: The EPAP mask is similar to a nasal pillow CPAP mask, but requires no power supply or a CPAP machine. It is held in place a head strap and has a micro-valve on the front of it. Figure 2: A large view of the micro-valve on the front of the EPAP mask. The expiratory resistance can be easily adjusted by rotating the sleeve to open or close part of the side opening.

How much pressure does the EPAP mask generate during breathing?

The operation of the EPAP mask was tested while connected to a breathing system shown in Figure 3. The EPAP mask (not shown in the figure) was applied on the plastic rubber nose with two nostrils and the mask was secured in place against the nostrils like it would be during normal use. The breathing system was designed to simulate normal breathing pattern at rest in terms of the volume of air flowing through the valve, in terms of frequency of breathing, in terms of the volume of air in and out of the lungs (tidal volume), and in terms of peak flow rate. This was accomplished by using a vacuum Plexiglas chamber in which a balloon (A respiratory breathing balloon) was suspended from the top of the chamber. A Harvard animal respirator (Harvard Apparatus Model 613 Dual Phase respirator) was connected to the chamber to generate negative pressure swings in the chamber causing inflation and deflation of the balloon. The swings in negative pressure in the chamber were adjusted to provide a volume of air in and out of the balloon of approximately 300 or 500 ml, which represents the normal range of tidal volume in adult humans. The frequency of the pressure swings in the chamber was set to provide a normal frequency of breathing of 15 breaths per minute. The pressure was measured from a side port near the nose using a pressure transducer (Grass Instruments, Warwick, RI). The signal from the pressure transducer was fed through a data acquisition system (Biopac Systems UM100A, Goleta, CA), and displayed on a computer monitor. The flow rate signal was recorded using a pneumotach (TSD117, Biopac Systems, Goleta, CA) and the flow rate was integrated as recommended by the manufacturer and recorded on a third channel to provide a tracing of the tidal volume in and out of the balloon and the EPAP mask. Calibration and verification of the pressure, flow rate, and volume measurement were done at the beginning of each experiment. The data were recorded and stored on the computer. Figure 3: Breathing system that was used to simulate normal breathing through the EPAP mask (not sown). The balloon represents the lungs. Inflation and deflation was accomplished by changing the pressure outside the balloon in the chamber.

Figure 4 shows typical tracings during a simulated breathing at different tidal volumes and different expiratory resistances. The pressure that was measured just upstream from the nose represents the pressure in the pharyngeal region in the back of the mouth. Typical tracings are shown in the figure under different breathing conditions that represent normal breathing pattern. The tracings also show the protocol that was followed. The peak pressure during expiration and during inspiration was measured in each experiment at each resistance level. The mean values from 18 experiments on random samples of the EPAP mask are shown in Figure 5. Figure 4: A typical recording of pressure (top channel), flow (middle channel) and integrated volume (bottom channel) in one experiment at different levels of expiratory resistance. The tidal volume was increased near the middle of the tracing. 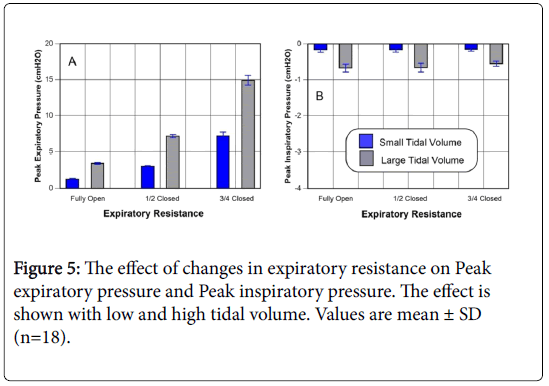 EPAP feels different from CPAP primarily because patients may feel that they need to work harder. This is particularly important during the first few days of adaptation to the EPAP device. Some patients give up on trying to use EPAP device because of such feeling. Adaptation to CPAP may be much easier because of the positive pressure support during inhalation; respiratory muscles do not need to work as hard as without CPAP. Indeed, work of breathing was reported to be less with CPAP than with EPAP [16]. EPAP devices do not provide such positive pressure support during inspiration and therefore work of breathing is not reduced like with CPAP. The EPAP mask was designed to facilitate adaptation because the expiratory pressure can be adjusted. The EPAP mask provides a range of expiratory resistance comparable to existing EPAP devices such as Theravent or Provent. For treatment of snoring a low expiratory pressure may be adequate. Guzman et al. [17] showed that snoring can be significantly alleviated with low level of CPAP therapy of 2 to 6 cm H2O. Such low pressure during expiration are generated by the EPAP mask with low level of expiratory resistance. Therefore, in some patients with snoring, it may be adequate to continue using the EPAP mask with minimal resistance (expiratory peak pressure of 1.3 to 3.2 cm H2O), but in some it may be necessary to increase the expiratory resistance slightly or perhaps up to ½ closed.

In conclusion, the EPAP mask is an expiratory pressure device that can be useful for treating snoring and low levels of obstructive sleep apnea. The EPAP mask may require some time for adaptation. It is recommended that the expiratory resistance be kept to minimum during the training period for as long as necessary until the patient becomes totally adapted to the EPAP and is able to fall asleep without problems. Subsequently the resistance can be increased to get more effect. Closing off the expiratory resistance about half way, provides resistance comparable to Theravent regular which has been shown to be safe and effective for many patients. Thereafter the resistance can be increased or decreased as necessary to maintain comfort. Provent has a much higher expiratory resistance than Theravent, and yet some patients were able to use Provent successfully. One should not rush to thinking that a higher resistance would be much better. Too much resistance may be difficult to tolerate because it may compromise ventilation leading to CO2 retention (hypercapnia) and may disturb sleep. EPAP devices are not recommended for patients with central sleep apnea. Mouth breathers, and CPAP users using a full face mask, may have more difficulty using EPAP devices.