An Overview of Status of Solar Power in India

Solar energy and its applications

Sun is the biggest energy resource that is present in the nature. It provides the energy in the form of the solar radiation, which consist of the UV light, radio ways, IR and visible light etc. Among the all form of energy, heat energy is dominating. Majority of the solar radiation reaches to the earth in the form of heat energy. This heat energy can be utilized for many purposes. Including cooking, water heating, steam generation and electricity generation. Some of the major applications of the solar energy are listed in the (Table 1).

ApplicationDescriptionSolar cellsSolar cell is a semiconductor device, which consist p-type and n-type semiconductor materials. Solar cells are also known as the photovoltaic cells which are used for the electricity generation. When sunlight falls on these devices, large number of the charge carriers is generated and the flow of these charge carriers leads to the current flow.Solar heat collectorsThe main function of the solar heat collectors is to collect the heat energy which incident on it. The collected heat energy can be used for the different purposes. There is various type of the solar heat collectors are available. It can be classified in two ways:· Depending upon temperature· Based on configurationSolar cookerSolar cooking is the application of the solar energy. Solar cooking system consist mirror as reflectors which transmitted the sunlight to the solar cooking chamber. Due to the heat energy, the temperature of the chamber increase that can be used for the cooking purpose.Solar steam generationThe collected heat energy by the solar heat collectors can be further processed for the steam generation. The collected heat energy transfers to the steam generation system through the energy transportation medium. Typically, liquid metal, water or gas is used as energy transportation medium in the solar energy based solar stem generation system.

Table 1: List of the major applications of the solar energy and their description.

Electricity generation based on solar energy Figure 1: Schematic Illustration of the Formation of the Space Charge Region in PN-Junction Device.

Working of the solar cell 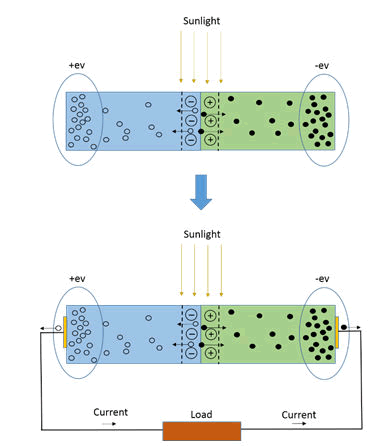 Figure 2: Schematic illustration of the working of the solar cell/ photovoltaic cell.

After breaking the covalent bonds inside the depletion layer, large number of the electron-hole pairs is generated. These charge carriers accelerated through the ions present in the depletion layer [10]. In the case of electrons, the acceptor ion applies a repulsive force on the electrons due to which electrons migrates to the n-type region. These photo generated electrons are accumulated at the end of the n-type region. In the case of the holes, donor ions apply a repulsive force to the holes due to which the holes migrate to the p-type region and accumulated at the end of the p-type region. Due to the accumulation of the charge carriers (i.e., electrons in n-type and holes in p-type), a charge is created at the end. At the p-side, positive charge is created and at the n-side, negative charge is created. Overall, a potential difference is created between the both ends of the device. Now, when a load is connected across the device, due to the potential difference, a current is flow through the load. The voltage generated by the single solar cell is very low, that is why multiple solar cells are connected in series in order to generate the high voltage.

Status of solar power in India 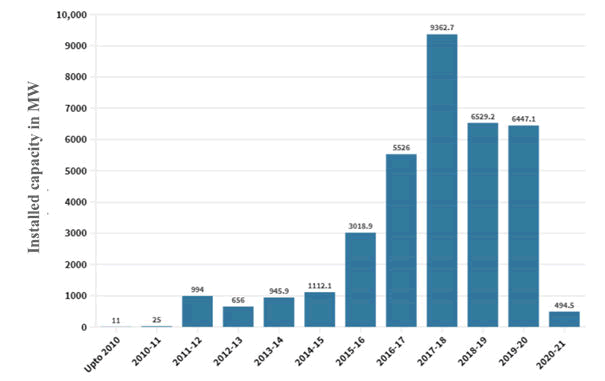 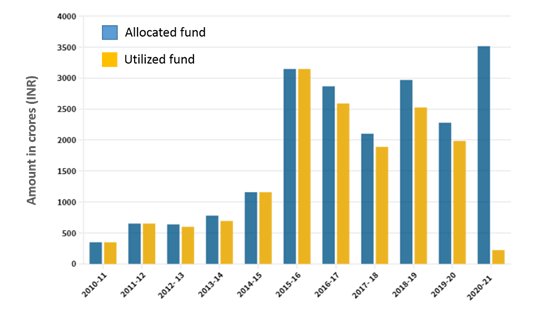 Figure 4: Bar Diagram of the Allocated Fund vs Utilized Fund in the Country for Solar Power.

Table 2: Different phases of the JNNSM for the establishment of the solar energy based power plants.

There are various agencies has been established by the government of India in order look into the energy matter such as production and requirement as well as status of the utilization of the renewable energy resources in the country. These government agencies play an important role in the power sector because they collect the data of the energy related factors that is very helpful for the government for future reference. Some of the major agencies associated with the energy are listed in the (Table 3).

Agency/ Organization/MinistryDescription/RoleMinistry of New and RENEWABLE energy (MNRE)MNRE is a ministry which focuses on the solar energy based activities including the development of the solar cells and establishment of the power plants based on the solar energy. MNRE is responsible for the research activities going on the conventional as well as non-conventional energy resources.Indian Renewable Energy Development Agency ltd (IREDA)This agency works under the MNRE ministry. It provides the funds to the projects associated with the production of the electricity by utilizing the renewable energy resources.Solar Energy Corporation of India (SECI)SECI is also works under the MNRE ministry. The main of this agency is to implement the all projects in order to ensure to fulfill the solar mission across the country.Ministry of Power (MoP)MoP is a government ministry which handles the electric power sector in the country. MoP makes various policies in order to ensure the fulfills the demand of the electricity by growing population.National Thermal Power Corporation (NTPC)NTPC is a state-owned organization. The majority of the shares of the NTPC owns by the government. NTPC is one of the largest electricity producers in the country. It shares 28% of the total electrical power generated within the country.Central Electricity Regulatory Commission (CERC)CERC has been established in the 2003. The objective of this agency is to regulate the tariff of the electricity producer enterprises.

Table 3: List of the government organizations associated with the energy as well as power sector in the country.

The demand of the electricity in India is continuously increasing as population increases at faster rate. The major share of the electricity is generated by the power sector is mainly depending upon the non-renewable energy resources but these energy resources has huge adverse effect on the environmental condition. Due to which the consumption of the non-renewable energy resources decreases significantly in recent years. In order to fulfill the demand of the electricity by growing population in India, Indian power sector starts utilizing the renewable energy resources and solar energy is widely utilized for the electricity production in the country. India has one of the biggest solar power plant in Rajasthan which has capability to produce 2 GW electricity. There are number of the solar power plants also established in other states that depending upon the geographical location, energy demand can be fulfilled. One of the major challenges of the solar power system is efficiency. The current solar based technology doesn’t offer higher efficiency due to which power production is affected. In order to overcome this challenge, it is recommended that new device technology and materials needs to develop so that the efficiency of the solar cells can be increased.