Scannone A, Tosta M, Suarez A and Otero L*

Conclusions: These findings suggest association between Class II malocclusion and suspicion of OSA. Nevertheless, further research is needed to determine which craniofacial and dental phenotypic features contribute to the development of OSA.

Obstructive Sleep Apnea (OSA) is a breathing disorder characterized by the increased resistance of the airways during sleep, leading to episodes of partial (hypopnea) or complete (apnea) collapse of breathing [1,2]. These episodes lead to diminishing of the intrathoracic pressure, blood oxygen desaturation, and sleep fragmentation, resulting in depression, fatigue, irritability and daytime sleepiness [3]. Previous studies have shown that OSA has a bidirectional association among diseases such as arterial hypertension, heart disease, and cerebrovascular events [4], which generate high levels of mortality in the world, reasons for which OSA is considered a major public health problem.

The prevalence of OSA depends on factors such as gender and ethnicity. OSA prevalence in adults varies between 14.7% and 34.2% but it is considered that approximately 82% of women and 93% of men with OSA are still undiagnosed [5,6]. OSA in adults is a multifactorial disorder resulting from the interrelation of factors such as skeletal malformations, collapse of upper airways, age, obesity, gender and genetics [7,8]. The clinical methods that guide to the diagnosis of OSA including sleep questionnaires and skull radiography, but he polysomnography (PSG) or "Sleep Study" is considered the gold standard test. The skull radiography and cephalometric analysis emerge as a complementary tool for the diagnosis of OSA. Cephalometric analysis identifies craniofacial features predisposing to OSA with sensitivity of 93% and a specificity of 21% [9].

Another important finding related to the OSA pathophysiology and the presence of craniofacial alterations is the hyoid bone position. It seems that the accumulation of fat in the pharyngeal regions produce anterior and inferior position of the hyoid bone, causing a descent of tongue and a consequent reduction of the upper airway. It has been reported that inferior hyoid bone position is observed in patients with OSA [13].

The objective of the present study was to identify craniofacial and dental features associated with high suspicion of Obstructive Sleep Apnea sleep in adults.

Sleep questionnaires including Berlin, Pittsburgh, Epworth and STOP BANG were applied in each participant. The results of questionnaires were subsequently correlated with the findings obtained in the cephalometric analysis in order to determine the possible relationship between craniofacial features and the high suspicion of OSA. Cephalometric measurements and description were shown in Figure 1. Measurements of dental cast models were taken to identify transverse maxillary micrognathia (Figure 2). 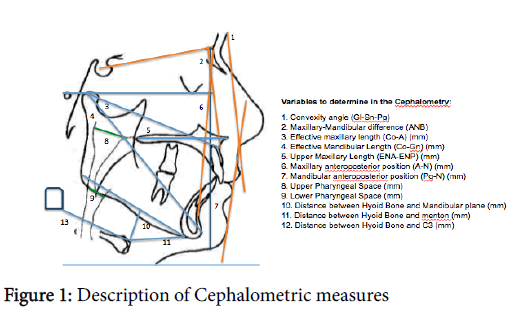 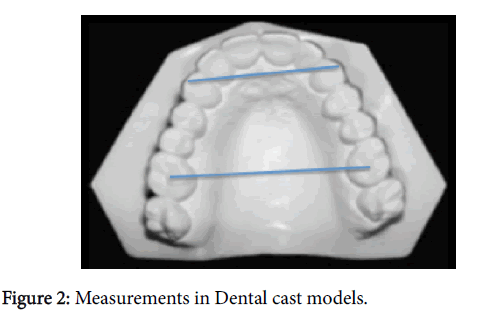 Kappa Statistical Test for concordance between two experts who performed cephalomentric analysis and dental cast measures. Chi square and Fisher Tests were used for the qualitative measures, and TStudent or U-Mann-Whitney Tests for quantitative variables according to the normal variables distribution previously established with the Kolmogorov-Smirnov Test.

For evaluating the relationship of cephalometric features presenting the chance of suspected OSA, a bivariate analysis was performed, where the ORs (Odds Ratios) was calculated with confidence interval of 95% and p<0.05. The statistical software used for the analysis was the STATA version 13.0 for Mac (Table 1).

The distribution of skeletal and dental measurements and their association with OSA is shown in Table 2.

Table 2: Cephalometric features of adults with and without suspicion of OSA.

The bivariate analysis showed no statistically significant difference either for the upper maxillary transverse measures (W intercanine and intermolar) (Table 3) nor for the cephalometric measures and their relationship to suspected OSA, except for the skeletal malocclusion (Table 4). Individuals with Class II malocclusion showed 1.5 times more chance of presenting suspicion of OSA compared to individuals with Class I malocclusion, and this relationship was statistically significant (OR:2.5 CI95%: 1.01 - 6.19; p=0.048); on the contrary, the skeletal class I patients have a 60% less chance of presenting suspicion of OSA (OR: 0.4 IC95%: 0.14-1.07 p=0.045).

Table 3: Bivariate analysis between maxillary transverse measurements and its relationship to suspected OSA.

Table 4: Bivariate analysis between the cephalometric features and its relationship to suspected OSA.

The results of the present study showed that adults with Class II malocclusion showed 1.5 times more chance of presenting suspicion of OSA when compared with individuals with Class I malocclusion, while patients with Class I had 60% less opportunity to present OSA when compared with patients with Class II skeletal patterns. These results have been previously reported by researching that demonstrated a clear reduction in the airways space in individuals with mandibular retrognathism and OSA [7]. A similar correlation has been reported by Ryu et al. [3] through cephalometric and PSG studies who showed that individuals with OSA had posteroinferior position of hyoid bone and mandibular retrognathism. Mandibular retrusion is frequently in individuals with class II malocclusion and the position of mandible in these individuals can obstruct the pharynx during sleep, increasing chances of developing OSA. Likewise, it has been observed that there is a close relationship between the tongue’s position and hyoid bone position. The literature reports that hyoid bone position impacts the tongue position, and therefore the permeability of the hypopharyngeal airway.

These measurements are related with the increase in the distance from hyoid bone to mandibular plane, as well as the increased distance from hyoid bone to anterior-inferior point of the third cervical vertebra (C3) [13]. Individuals with Class II malocclusions tend to have a lower hyoid bone position, but in our investigation anterior and inferior hyoid bone positions were not associated with high suspicion of OSA. Transverse maxillary micrognathia has been associated with OSA, although the results are not consistent [14,15]. For this reason in the present study we evaluated the intercanine and upper intermolar width measurements in dental cast models, but the results did not show association between these measurements with suspicion of OSA. PSG is an effective test to diagnosis OSA, but the origin of airway obstructions that produce OSA cannot be identified by PSG. Lateral cephalometric radiography is a useful tool to evaluate the airway obstructions in these individuals [16-18]. Further investigations are needed to determine craniofacial phenotypic characteristics that contribute to the development of OSA in adults.