In this work, the components of Dye sensitized solar cell (DSSC-Dye Sensitized Solar Cell) and the processes that take place in them are presented and the principle of operation is studied. Apparently, the technology of making this solar cell is simple and inexpensive, it is environmentally friendly and safe.

Presently, the energy consumed in the world is mainly energy from fossil fuels, thermal energy, nuclear energy and hydropower. However, the main disadvantages of such fuels are limited quantity, environmental friendliness and seismic stability [1,2]. Therefore, there are modern requirements on the mankind that, to use of renewable and environmentally friendly energy sources, solar and wind energy.

The following active systems for the use of solar energy are solar cells (devices that receive solar energy and convert it into electricity) and solar power plants (directing sunlight to a liquid, often water-filled tank, and subsequent processes continue as in conventional thermal power plants. That is, the water heats up and turns into steam. Steam turns the turbine, and the turbine rotates the generator rotor, and thus electricity is generated). Solar energy can also be used to generate heat. In this case, solar collectors are used. They can use water, air or antifreeze as a heat carrier.

At present, the complexity of the technology of manufacturing semiconductor-based solar cells that convert solar radiation energy into electricity in the world and the high cost of electricity generated from them hinder the possibility of large-scale use of these solar cells. Solar elements based on amorphous, poly-and microcrystalline semiconductors, which are easy to manufacture and inexpensive, rapidly degrade their structure under the influence of temperature and light, have a low efficiency and low operating time, which also increases the cost of electricity. In general, the efficiency of the old type of silicon-based solar cells can be increased to 25% in the laboratory, and the efficiency of arsenide-gallium-based solar cells can be increased to 32% in the laboratory [3].

Nevertheless, modern demand is forcing us to look for solar cells that are cheaper in terms of manufacturing technology and electricity generated. Examples of such solar elements are "DSSC-Dye Sensitized Solar Cell" or "Grazsel elements". This attracts experts in the field with the technology of production of solar cells, the low cost of their introduction and improvement, the convenience of their use and production [4-6]. 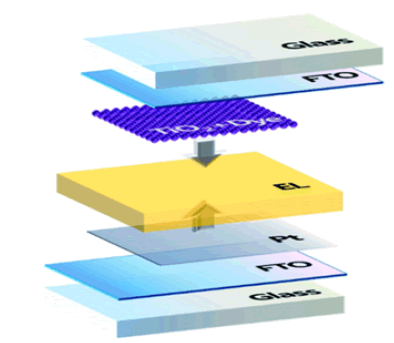 The second layer is a layer of TiO2 nanoparticles with n-type semiconductor properties. The advantages of TiO2 include high light sensitivity, stability of the structure to sunlight and low cost [5].

The third layer is the dye layer, and the light sensitivity of the dye molecules is a key component of the DSSCs to increase the absorption efficiency of visible light photons [9].

The fourth layer is the electrolyte layer, which has the following three most, common types:

The fifth layer is the electrode. The electrode is another important component of the DSSC. The main purpose of the electrode is to reduce triiodide. The rate of the reduction reaction at the cathode is important because after the triodide is reduced, iodide is formed on the anode side of the electrode, which is used to regenerate the oxidized dye molecule. To obtain an acceptable cell, the reaction on the anode side must be slow and the reaction on the cathode side, which is the electrode, must be fast. The electrode is close to the equilibrium potential of the redox pair, but the anode side is far from the equilibrium potential. This phenomenon creates a voltage difference in the DSSC, leading to the recovery of the triiodide. Although many materials such as platinum, carbon, graphite, and conductive polymers have been used as electrodes, platinum is still the preferred catalyst. Platinum is the best catalyst for the iodine-triiodide-redox pair. In addition, the light reflection of platinum is higher than that of the carbon coating, resulting in more light being reflected in the cell.

It is known that under the influence of photons in sunlight, an electric current is generated in the solar cells as a result of the generation of charge carriers and the separation of the generated charge carriers. Titanium oxide (TiO2) or zinc oxide (ZnO) with a thickness of 5 μm -10 μm is used as a photoanode in DSSC solar cells. This electrode is connected to a conductive glass. As the cathode can be used various conductors (e.g. platinum (Pt), gold (Au)) and graphite, which have a small output of electrons. Between these two electrodes is filled a light-sensitive dye and an electrolyte containing iodine salt. The electrolyte layer serves as a layer that delivers charged particles to the process [4,5]. In general, DSSC-based solar cells convert light into electrical energy using chemical reactions that occur in electrolytes. Based on N and p type semiconductor, the processes that take place in DSSC solar cells are shown in Figure 2. Initially, under the influence of light, electrons pass from the valence band of the dye molecules to the conduction band. Then, since the lower limit of the potential of the conduction band of the dye is greater than the potential of the conduction band of TiO2, under the influence of this potential difference, free electrons are injected towards the conduction band of the photoanode (TiO2). The electron then passes from the photoanode to the transparent conductive layer. This transition can be compared to the jump conductivity in the localized states of inorganic and amorphous semiconductors. As the electron enters the outer chain, new electrons enter from the cathode to maintain the law of electron neutrality. The pores released from the electrons in the valence band of the dye are transferred to the opposite electrode, i.e., the cathode side as shown in Figure 2. 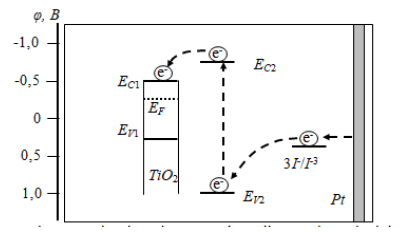 According to the articles of [5,10], the formation of charge and its transport and discharge process in highly sensitive colored solar cells are given in the following expressions 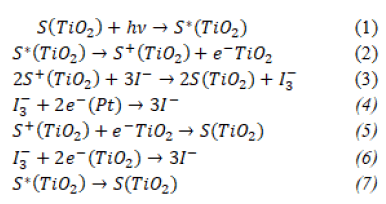 Under the influence of photons falling on an n-type solar cell, the dye molecules wake up, that is, the electrons in the valence band of the dye molecules pass into the conduction band (1). When awake, the dye electron passes into the TiO2 layer, the dye is positively ionized (2). It is known that the electrolyte transports incoming electrons from the cathode to the ionized dye layer. This process is accomplished by the iodine molecules in the electrolyte binding the two electrons together and carrying them to the dye (3). Iodine molecules ionize after donating their electrons to the dye and return to their original state by accepting an electron from the cathode (4). In this process, not all of the electrons transferred to the photoanode are involved in current transport, but some are recombined. In the recombination process, some of the electrons fall into the dye layer and some into the electrolyte, neutralizing the ionized layer (5,6). In the same way, the electrons in the conduction band of the dye that has been awakened can return to the valence band without being injected, which changes the dye layer from the excited state to the unexcited state (7).

The processes that take place in p-type DSSCs are given in the following expressions:

The charge transport in p-type semiconductor-based DSSC solar cells is slightly different than in n-type. In this type of solar cell, under the influence of light, the dye molecules are excited (8), the excited dye receives an electron from the photoanode, as a result of which the photoanode positive dye layer is negatively charged (9). From the dye molecules that have taken up the excess electrons, these electrons are attached to the iodine molecules in the electrolyte, ensuring the charge transfer (10). The iodine molecules release the electrons they received from the dyes through the cathode to the outer chain, and thus they are neutralized (11). As mentioned above, not all electrons are involved in the current-carrying process. The electrons, which have a relatively smaller energy, recombine with the positively charged photoanode and neutralize the photoanode (12). Some of the electrons transferred to the electrolyte are involved in the formation of the "dark current", i.e., they pass directly from the electrolyte to the photoanode (13). The low-energy electrons that pass from the valence band of the dye layer to the lower limit of the conduction band return to their original positions, resulting in the dye returning to its original unsteady state (14). The 14 expressions we discussed above represent the formation of charges in n and p-type DSSC solar cells and the process of their transport.

Figure 3 shows a diagram of the energy zones of the DSSC solar cell. The distribution of the density of the electron states in the dye is similar to that of amorphous semiconductors, i.e., it can be assumed that the value of the electron state density in the dye ban zone is around 1017-1018 eV-1 sm-3. Therefore, the value of the light absorption coefficient in this material will be greater than 105 sm-1. This makes it possible to obtain large currents from the solar cell. 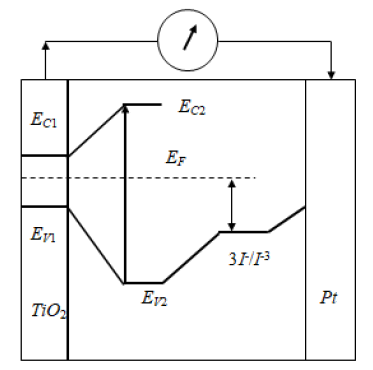 The maximum value of the voltage output from the DSSC solar cell is determined by the difference between the TiO2 conduction band and the fermi level.

Thus, in this study, the components of DSSC-Dye sensitized solar cell (DSSC-Dye Sensitized Solar Cell) and the processes that take place in them are presented and the principle of operation is studied. Apparently, the technology of making this solar cell is simple and inexpensive, it is environmentally friendly and safe. Therefore, today the use of this type of solar cells fully meets the requirements of the times.