Electricity is the most utilizing energy source in the world and there is a great scarcity of electricity so there is an importance to meet renewable energy targets as the generation of electricity from swell energy is undeveloped even though technology is widely available. So modification of this system concept would be helpful to development and growth of the system. The main objective of this research paper is to eliminate the difficulties being faced by the other systems and to supply continuous electricity without any fluctuations. We convert the kinetic energy of waves into mechanical energy through our mechanical arrangements in our system then it is converted into electrical energy. This system is the modification of the previous wave energy conversion system where we convert both motions of the waves i.e., both forward and upward motion wave into electrical energy. From this system we can expect continuous electricity supply.

Wave energy is the one of major renewable energy source of ocean based renewable energy that uses the power of the waves to generate electricity wave energy is the periodic up-and down movement of water because of force of winds [1-3]. There are various methods that generate electricity from the ocean based renewable energy sources like tidal energy, wind energy, wave energy, ocean current energy, Ocean Thermal Energy Conversion (OTEC). The most popular methods are point absorber oscillating water column, tidal lagoon power etc., this paper is about to eliminate the difficulties faced by other methods. The main problems faced by other systems are those are completely immersible in ocean which can cause corrosion or fouling of the system those systems include complex construction and are not economically feasible. These systems cause damage to ecosystems or it maybe get damaged by the ecosystems [4-6].

The main objective of this paper is to supply or generate electricity continuously without any fluctuations, comically feasible, these system useful to supply and distribution of electricity in remote areas where it is difficult to supply [7-10].

• These systems are fully immersed which can cause corrosion, fouling

• These are not economically feasible

Vivekraj M Solankia (2021): Design and development of ocean wave energy power generation system; to eliminates the existing limitations of wave energy converter methods and also helps the potential of this method for generating electricity. To utilize both motion of float we can solve this problem by designing the gearbox to produce continuous power with single generator.

Jugraj singh randhwana (2015): Ocean energy the future of renewable energy; review about background of tidal power uses advantages and design aspects of marine current turbine. Conversion of tidal energy into electricity on rotor turbine the technology available and developed `by using energy from oceans is limited to the sites that have significant quantity of tides or waves.

P Naveen kumar A Jai Prakash (2019) : Design and fabrication of power generation by combined wind and tidal turbine; areas necessary for further improvement in wind generation construction and working principle of these methods a transition from convention energy systems to those based on renewable sources is necessary to meet the ever increasing demand for energy and to address environment concerns.

Md Mahbubur Rahman, Nirupom Paul, Shahrior Ahmed, Md Safi Rashed, and Md Saiful Islam: Power generation from sea wave: An approach to create renewable energy this paper presents a brief overview about the design benefits, risk and environmental impact of a sea wave power plant. The proposed plant is reliable, sustainable, environmentally friendly power extraction procedure from sea waves. It includes a number of empty vessels the empty vessels get up and down randomly due to the upward wave thrust each empty vessel is connected to a crank. Cranks are attached with a single shaft empty vessel moves up and down crank facilitates this linear motion of empty vessel into the rotation of shaft thus generation of electricity takes place by connecting to gear box.

Vicenzo Delhi colli (2006): Tubular generator drive for wave energy conversion this paper illustrates the operation of a tubularmachine drive as a linear generator for a heave-buoy wave energy conversion and briefly summarizes the principles of marine wave buoy interaction and reports the design analysis and control of a Permanent Magnet (PM) synchronous tubular linear machine based on a scaled generator prototype and on a rotating simulation test bench.

This paper presents the principle of the power transmission from the wave to the buoy and outlines a control approach intended to maximize both the wave-buoy and ac/dc power transfer resulting in an optimal overall conversion performance.

An apparatus for the conversion of the energy of sea or ocean swells this paper relates to an apparatus adapted to convert energy from ocean swells (waves) typically to electrical energy the apparatus comprises: A frame including a vertical post and horizontal beam, a first generator slid ably connected to the vertical post, a second generator slid ably connected to the horizontal beam, a first pinion.

As our system contains rack and pinion gears connected to the float. The pinion gear is connected to the generator. Any cause of motion of float either upward or forward that linear motion will be converted into rotary motion through our mechanical arrangements (Figure 1). 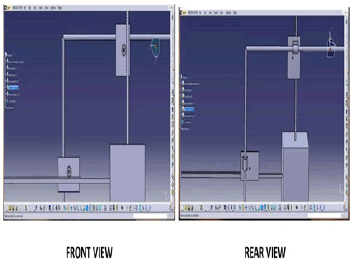 Analysis is main part of the project to determine stress, strains, pressures acting on the arrangement of our mechanism in our wave power energy [13] generation system, mainly acting on the float, rack and pinion, sliding of the holding rod and stand Figure 4. 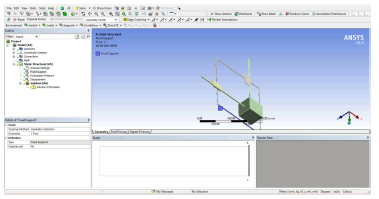 Figure 4: Design after assembly and simulation is to convert the CAT.

Firstly, the main design after assembly and simulation is to convert the CAT part product into the file to transfer into the geometry file of the Ansys software in the static structural in analysis systems and to we have the engineering data, geometry, model, setup, solution, result [14,15]. 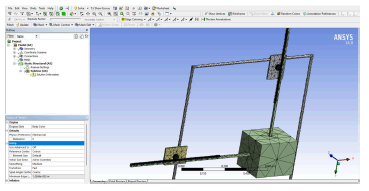 Figure 5: Meshing is to cut out the part meshing.

Meshing is to cut out the part into the similar no of the shapes, generally now meshed our parts into the triangular meshing Figure 5.

It is basically hinged at the bottom of the setup and it acts actually main components to move on the basis of the fixed stand main stand also called as frame consists of holding two steel rods and also support provided for the multi meter setup Figure 6. 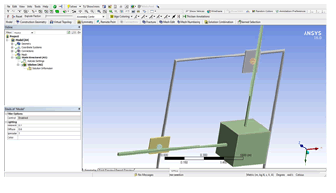 Figure 6: Hinged at the bottom of the setup.

Waves produces the pressure hydrostatic pressure and its acts on the surface of the contact which is on the wave float downward surface and the pressure which is acting on the float helps the float to displace in the vertical and horizontal directions Figure 7. 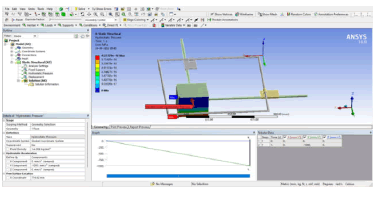 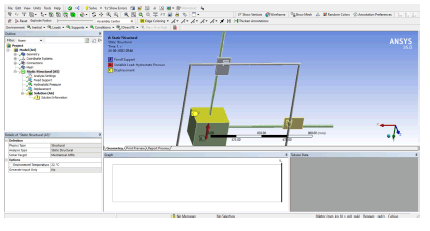 Figure 8a: Vertical displacements movements of the float. 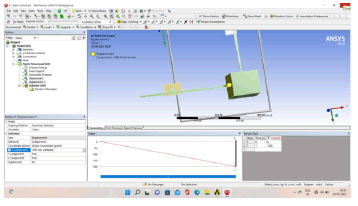 Figure 8b: Horizontal displacements movements of the float.

Velocities of the pinion basically called as the rotational velocities in both the pinions, generally it is measured in rad/sec also called angular velocities. Thus we need to obtain rated speeds for the power generation in the generators Figure 9. Figure 9: Rotational velocities in both the pinions. 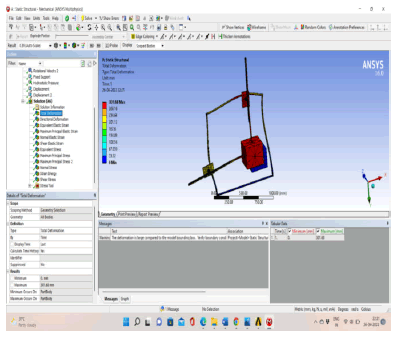 In directional deformation, you can select a coordinate (X,Y or Z) to see the deformation result of your physical model in this direction Figure 11. 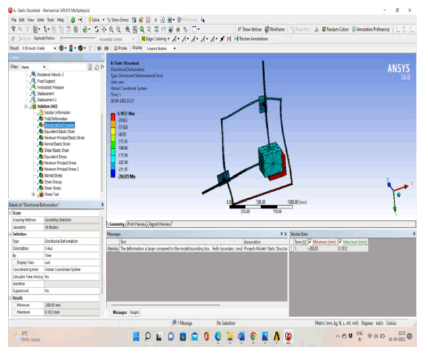 The equivalent elastic strain is defined as the limit for the values of strain up to which the object will rebound and come back to the original shape upon the removal of the load Figure 12. 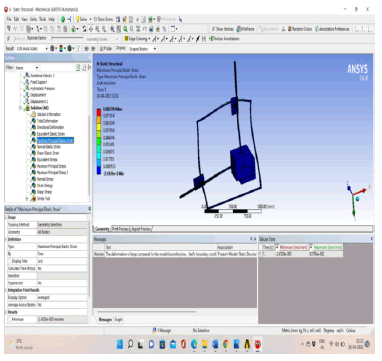 Normal strain occurs when the elongation of an object is in response to a normal stress (i.e. perpendicular to a surface) and is denoted by the greek letter epsilon Figure 14. 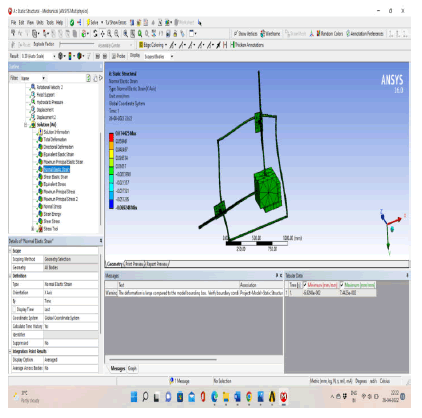 Equivalent Stress theory also called distortion energy theory or von- Mises theory states that maximum equivalent stress at stress elements on material or part must be smaller from the yield strength of that used material Figure 15. Shear strain is the relative displacement in ratio of any perpendicular layer distance from a fixed layer Figure 17. Normal stress might be useful is when you request stress on a surface that represents the cross-section of a part in tension Figure 18. Strain energy is stored within an elastic solid when the solid is deformed under load. In the absence of energy losses, such as from friction, damping or yielding, the strain energy is equal to the work done on the solid by external loads Figure 19. 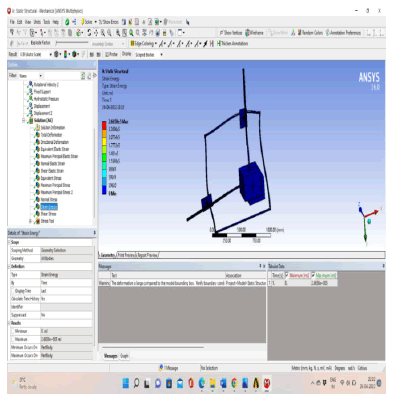 Shear stress, force tending to cause deformation of a material by slippage along a plane or planes parallel to the imposed stress Figure 20. 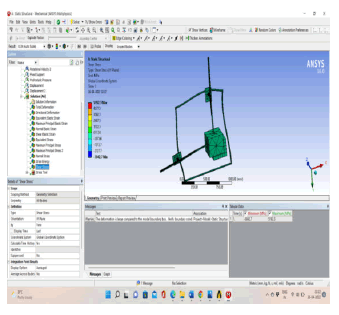 The minimum and maximum values of the all the deformations, stresses, strains, strain energy ranges we have calculated under the fluid density 1000 kg/m3 and the magnitute of 20 rad/sec in the rotational velocities of the pinions. Thus the results from the analysis helps us to the find out the pressure and placement of our setup in the ocean above the waves.

The power obtained upon testing the prototype on the wave genration setup is about 24-30 volts of voltage is generating in the setup. If we increase the scale as we go the main power system we can achieve upto 250 volts of voltage power in the system by the tidal energy.