Muslims abstain from eating, drinking, sexual activity from sunrise to sunset during the fasting month of Ramadan. This study is aimed at investigating the effect of Ramadan fasting on plasma glucose levels and cognitive functions such as attention, memory, decision making. The study was carried out with 15 healthy adult participants. P300 recordings and plasma glucose levels were taken from all participants in fasting and subsequently non-fasting period as control group. The cancellation test was also administered to assess sustained attention in both periods. P300 was recorded using auditory oddball paradigm which consisted of 120 standard and 40 target stimuli. Latencies and amplitudes of P300 to target and standard stimuli were analyzed. P300 wave is important component of auditory event-related potentials (ERPs) commonly used to examine cognitive function in decision making processes. There was a significant difference between mean plasma glucose levels in fasting and non-fasting period (93.73 ± 7.55 mg/dL and 112.80 ± 18.82 mg/dL, respectively) (P<0.05). P300 amplitudes to target stimuli during fasting were significantly (P<0.05) lower than those in the non-fasting period (11.22 ± 4.26 μV and 14.65 ± 3.59 μV, respectively). P300 amplitudes to standard stimuli during fasting were also significantly lower than those in the non-fasting period (11.84 ± 2.88 μV and 14.69 ± 2.54 μV, respectively) (P<0.05). P300 latencies to standard stimuli during fasting were significantly longer than those in the non-fasting period (348.21 ± 11.00 ms and 339.22 ± 15.26 ms, respectively) (P<0.05). Cancellation test completion time in fasting was significantly (P<0.05) longer than that in the non-fasting period (79.70 ± 10.83 sec and 67.41 ± 10.02 sec, respectively).These findings suggest that Ramadan fasting adversely affects cognitive functions such as perception, sustained attention and decision making.

The biological drive to eat is linked to the satiating power of food. Satiating power, or satiating efficiency, describes the capacity of a food to suppress and to inhibit further eating. Food causes this effect by certain mediating processes that can be roughly classified as sensory, cognitive, post-ingestive (pre-absorptive) and post-absorptive. These processes are operated by the impact of food on physiological and biochemical mechanisms, and collectively these processes have been referred to as the satiety cascade [1].

In principle, a large number of mental or cognitive tasks have the potential to disclose the effects of foods. However, in practice, a limited number of tests have been used. Performance tasks reflect a number of cognitive functions; for example, perception, memory, attention and arousal, information processing, accuracy and speed of movement [2]. These tasks represent single components of performance, which form part of more complex skills and abilities; for example, car-driving ability or operating machinery. Cognitive performance encompasses not only measures of speed (reaction time) but also of processing accuracy (measures of accurate and inaccurate detection) [1]. The proposed mechanism of action of a nutrient in terms of its effects on blood glucose or other neurotransmitter systems and the likely effects of changes in these neurobiological parameters on cognitive processes have not been considered.

A large number of cognitive tests can be used to examine the effects of nutrients on performance and which measure functions other than attention and memory. There have been a small number of studies examining nutrient effects on performance, which have used tracking or driving simulator tasks.

Nutritional interventions that facilitate a rise in blood glucose enhance performance of memory and reaction time tasks. The decline in glucose in hypoglycemia impairs performance [1]. Poor glucose regulation is associated with poor cognitive performance although this has been examined only in healthy elderly and diabetic populations [3,4].

This study is designed to investigate effects of Ramadan fasting on cognitive performance with P300 generation. Each year during the lunar month of Ramadan, adult Muslims abstain from eating, drinking, smoking or having sexual relationship between sunrise and sunset. Free eating is allowed from sunset to down [5]. We investigated cognitive changes linked to time of year and time of day as a result of abstaining from routine physiologic requirements.

Event-related potentials (ERPs) represent an interesting tool to relate behavioral performance and cerebral activity as they monitor brain electrical activity during cognitive tasks with a high temporal resolution. More precisely, during a cognitive task, ERPs allow one to identify the electrophysiological component representing the onset of a dysfunction, and then to infer the impaired cognitive stages [6]. The majority of studies have focused on the P300, a long-lasting positive deflection appearing around 300 ms after stimulus onset Knight. This focus on the P300 may be explained by the fact that this very large positive-going waveform is easily elicited (with the oddball paradigm) and easily detected. Directed attention and memory activities are associated with P300 generation. Moreover, the P300 has proved its clinical and predictive usefulness in much other pathology, i.e. as a risk factor in psychopathologies as a tool for the differential diagnosis in dementia or as a tool to estimate the treatment efficacy in the syndrome of attention deficit and hyperactivity [7].

In an oddball paradigm, the amplitude of the P300 depends on the amount of information extracted from the event [6]. On the other hand, it is known that the P300 latency can be used as a measure of the stimulus evaluation time or as an alternative to response times [8,9].

In our study, we aimed to investigate the effects of Ramadan fasting on directed attention and memory by comparing the P 300 measures in fasting and non-fasting subjects.

Our experiments were carried out 16 healthy male students (19.75±0.17) from Medical Faculty of Erciyes University. All subjects were reported no neurological or psychiatric problems and had normal hearing sensitivity. They were from a similar ethnic background, had no history of any systemic and ocular disease and all were nonsmoking. All subjects gave informed constant. All experiments were performed according to the guidelines of the Erciyes University Ethics Committee (05-435).

Records were taken from each students twice; once, during fasting (n=16), and once when non- fasting condition (n=16). There was one month between the measurements. Blood glucose levels were also determined in each group. EEG activity was recorded at the Fz, Cz, Pz and Oz electrode sites of the International 10-20 system using Ag/AgCl electrodes, affixed with electrode paste ad tape; with impedance of 10 k or less. Reference electrode was attached to the right earlobe, and the ground electrode was attached to the left earlobe. The signals were filtered with a band-pass filter (0.03-100 Hz), and EEG was digitalized at 2000 Hz with a 1024 ms prestimulus baseline. Waveforms were collected and averaged off-line by a Pentium computer, which also controlled stimulus presentation. Automatic artifact rejection was used, based on signal amplitude (>50 V) or<50 V) in Fz. Twenty responses to target stimuli were averaged at each location.

Standard (2000 Hz) and target (1500 Hz) auditory stimuli were presented binaurally over headphones to the subject with duration of 1000 msec. The target tone occurred regularly with a 0.20 probability. The rise and fall time of each tone was 5m sec [10].

During the recording session, subjects sat in a chair in a dimly illuminated room, in a relaxed position. They were instructed to sit quietly with open eyes and to follow the stimuli carefully, to try to detect rare tones of 1500 Hz frequency. Prior to the experiments 20 tones with altering frequencies (2000 and 1500 Hz) were demonstrated to the subjects. They were also asked not to move or speak, or to blink too much, and to look at a fixed point.

The currents were amplified and transferred to the Brain-Data station. Standard oddball paradigm was used as a stimulant. The latencies and amplitudes of P300 waves recorded during fasting and non-fasting conditions. Amplitudes were measured relative to prestimulus baseline, and peak latencies were defined as the time point of maximum amplitude [11,12].

SPSS for Windows computing program used for the statistical analysis of the data. All data are expressed as mean ± standard deviation (SD). P300 amplitudes and latencies and blood glucose levels of fasting and non-fasting group were measured by using Student t test. Differences were considered significant when p<0.05.

The differences between fasting and non-fasting glucose levels were statistically significant (p<0.001) (Table 1). Also we found P300 latency reduced and P300 amplitude increased in non-fasting group when compared to fasting group (Figures 1 and 2).

Table 1: Differences in Glucose Levels between Fasting and Non-fasting Group. 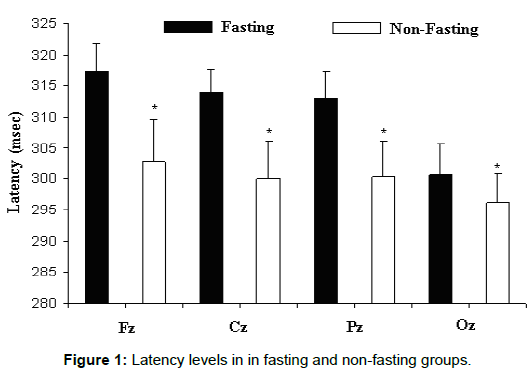 Figure 1: Latency levels in in fasting and non-fasting groups. 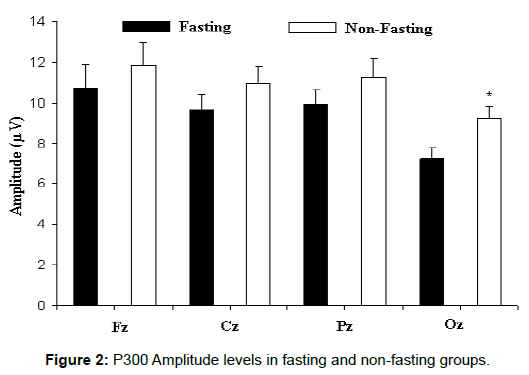 Nearly 20% of the world population and 92% of Turkey’s population is Muslim and 66% of Muslims are fasting during the month of Ramadan [13]. The effect of fasting on psychomotor performance has been mentioned in some of the studies [14,15]. The number of studies of the effect of abstaining from eating and drinking for 12 hours and the other circadian rhythm changes during Ramadan on attention and memory are very restricted. On the other hand, our study is the first in literature that investigate the relationship between fasting, non-fasting and P300 recordings.

The working hours and daily routine physical activities of medical faculty students included in our study during Ramadan were continued as before or after the Ramadan. They didn’t take any medication or chemicals during, before or after the Ramadan. Their sleeping hours were decreased only 1 hour during Ramadan when compared to normal period and their daily diet content didn’t change during Ramadan fasting when compared to non-fasting times. Only their meal times had changed. All the records were taken at the same time of the day (15.00-17.00) and only male students were included in the study.

In Geisler and Polich’s study, P 300 stimulus was recorded at a different time of a day (8 am, 11 am., 2 pm, 5 pm., 8 pm.) and daily changes of P300 waves were compared with food intake and body temperature. They were elicited that P 300 amplitude and latency were not affected directly by the time of day. However, P 300 amplitude was smaller in subjects who had not eaten within 6 hours of testing relative to subjects who had a recent meal [15]. The findings suggest that P300 is related to recency of food intake. In another study, ERPs were assessed in subjects before and after consuming food and in contrast to previous results it was found P 300 amplitude was unaffected by food consumption and peak latency increased. These findings suggest that food consumption affects general arousal, rather than specific cognitive EEG or ERP factors [16].