1Department of Pharmacology, Faculty of Pharmacy, The Islamia University of Bahawalpur, Pakistan

Objective: Gentamicin has been reported to cause nephrotoxicity as evidenced by marked increase in serum creatinine and urea, and a significant decrease in creatinine clearance. The objective of this study was focused on exploration of protective action of Cassia absus L. against Gentamicin-induced nephrotoxicity in rats. Methods: Aqueous methanolic extract of Cassia absus L. seeds (Ca.Cr) were prepared and phytochemical analysis were performed. Wistar Albino rats were divided into different groups. Control group was given normal saline; p.o, while treatment groups received different doses (100, 300 and 500mg/kg) Ca.Cr Intoxication was induced by intraperitoneal administration of Gentamicin (100mg/ kg) for seven days, except normal control group. The experimental animals were evaluated for changes in body weight, kidney weight, serum creatinine, serum urea and blood urea nitrogen levels. Histological studies were also carried out for the representative animal of each group.

Gentamicin (GM) is an aminoglycoside antibiotic with limited use due to its nephrotoxicity. To interpret the possible underlying mechanism of gentamicin nephrotoxicity, a number of hypotheses have been suggested. The main mechanism considered is the accumulation of gentamicin in the proximal convoluted tubule of the kidney [1]. GM-induced nephrotoxicity is associated with different structural and physiological changes in the kidney, which include damage of cell organelles and cell death, swelling of lysosomes and mitochondrial vacuolation. These changes cause acute renal injury which is evident through the increase in serum urea and creatinine levels. Another important mechanism involved is the overproduction of reactive oxygen species (ROS), which produce cellular necrosis through many different mechanisms mainly including membrane lipid peroxidation and denaturation of the protein. It may also cause damage to DNA renal tissue [2]. Produced free radicals destroy the glomerular basement membrane, disturb the tubule function, and degrade the collagen and other matrix components [3]. Plants have been a source of treating ailments for several years. The presence of the important phytochemical constituents in plants had made them a novel source for treating various ailments i.e. Inflammatory and renal disorders. Many free radical scavenging constituents in plants such as flavonoids, phenols have increased their usage. Many plants and herbs are used to treat serious diseases like kidney failure. Cassia absus L. has been reported to possess anti-glycation, alpha-amylase inhibitory and anti-oxidant activities [4]. The current study was conducted to evaluate the nephroprotective potential of Cassia absus L. against gentamicin-induced nephrotoxicity in experimental animals.

Seeds of Cassia absus locally known as chaksu, bankulthi, were purchased from the local market of Bahawalpur, identified by a well known botanist and the specimen was preserved at the herbarium of the department of pharmacology, faculty of pharmacy, the Islamia University of Bahawalpur. A voucher number was issued for the specimen i.e (CA-SD-07-17-103) for Cassia absus.

Seeds were washed carefully to remove any extraneous matter. After washing, it was dried under shade. The aqueous methanolic extract of Cassia absus (Ca.Cr) was prepared by macerating the plant material in methanolic water (70/30) for three days, thrice. The filtrate obtained by passing the macerated material firstly through a muslin cloth and secondly through filter paper was evaporated at low temperature and reduced pressure using a rotary evaporator. The thick viscous crude extract of the plant was prepared. Extract was dried in a hot air oven at 40ºC . It was labeled, weighed and stored properly for further phytochemical screening and pharmacological studies. The percentage yield of the crude extract was also calculated.

The crude extract of Cassia absus (Ca.Cr) was analyzed for the presence of various phytoconstituents [5].

Wistar albino rats (160-220g) and Swiss albino mice (18-25g) of either sex were housed at the animal house of Pharmacology research lab, faculty of Pharmacy, the Islamia University of Bahawalpur. All animals were kept under standard conditions of temperature (23-25???) and humidity (50-55%) with 12 hrs day and night cycles. They were provided with standard food and water ad libitum. All the experimental studies were performed according to the guidelines of the Institutional animal ethics committee of the faculty of Pharmacy, the Islamia University of Bahawalpur under the registration number (PAEC/2020/24).

Animals were divided into five groups with six rats in each group. All the doses were administered for 7 days. The normal control and intoxicated groups received normal saline (5ml/kg; p.o). The treatment groups were administered with different doses (100, 300, and 500mg/kg; p.o) of Ca.Cr, throughout the experimental period. Except control group, all the animals in other groups were intoxicated with Gentamicin (100mg/kg; i.p) for 7 days rats according to the method adopted by (Ehsani et al., 2017) with slight modification [6]. At 8th day, animals were anesthetized by Ketamine xylazine in 10:1 (0.2ml/100g) and blood and kidney samples were collected for Hematological and Histological analysis.

Estimation of Changes in Body Weight

The weights of the animals under study were measured at different days (0, 3, 5 and 7) to determine the changes in body weight among the experimental groups.

The kidneys were removed surgically, washed with normal saline. The right wet kidney weight of control, intoxicated, and treatment groups was calculated at the end of the study to evaluate the changes in kidney weight among experimental groups [6].

Animals under study were anaesthetized with 0.2mL/100g Ketamine (50mg/kg)/Xylazine (5mg/kg) combination (10:1) respectively. Blood samples were taken from cardiac puncture and allowed to clot and centrifuged at 3000 rpm for 15 minutes for serum separation. Eppendorf tubes were used to store serum and preserved at -20??? for the estimation of creatinine, urea and BUN levels, using diagnostic kits.

Creatinine is the breakdown product of creatinine phosphate in muscles. Creatinine concentration is measured based on Jaffe’s method. Urea concentration in the blood was estimated by enzymatic method using the Urease enzyme kit by the modified Berthelot method. BUN was calculated using the following standard equation [7].

After weighing, kidneys were immersed in 10% formalin for histological examination. The kidneys were processed for dehydration using absolute ethanol, cleared in xylene, embedded in paraffin and sectioned. The prepared sections of each kidney were stained with haematoxylin and eosin dyes and observed under a light microscope [8].

An acute toxicity profile of Ca.Cr was carried out according to the OECD guidelines and methods adopted by (Jabeen et al., 2009) with slight modification. Animals were divided into different groups and fasted overnight. The Control group was given N/S (10ml/kg p.o.). The treatment groups received successive doses of the crude extract; i.e. 1000, 3000, 5000 and 10,000 mg/kg. The animals were observed for any abnormal behavior at 6 hr, 12 hr, 24 hr upto 48 hrs [9].

The phytochemical analysis of crude extract of Cassia absus (Ca.Cr) showed the presence of many important phytoconstituents such as alkaloids, glycosides, flavonoids, phenols, tannins, saponnins, quinones, terpenes and proteins.

Estimation of Changes in Body Weight 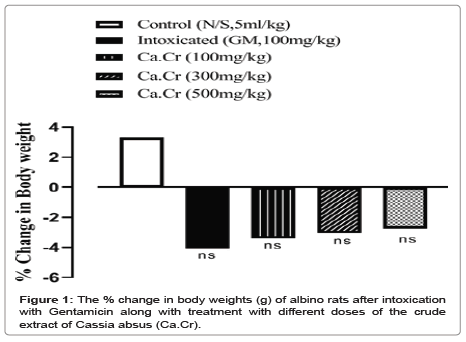 Table 1. The body weights (g) of albino rats after intoxication with Gentamicin (100mg/kg; i.p) for 7 days along with treatment with different doses of the crude extract of Cassia absus (Ca.Cr).

The values are presented as Mean ± SEM of six animals in each group. The data is analyzed using two-way ANOVA followed by Post hoc test (Tukey’s test) and the results are considered non-significant (ns) if p>0.05 and significant (*) if p<0.05.

Estimation of Changes in Kidney Weight

Table 2. The wet kideny weights (g) of albino rats after intoxication with Gentamicin (100mg/kg; i.p) for 7 days along with treatment with different doses of the crude extract of Cassia absus (Ca.Cr). 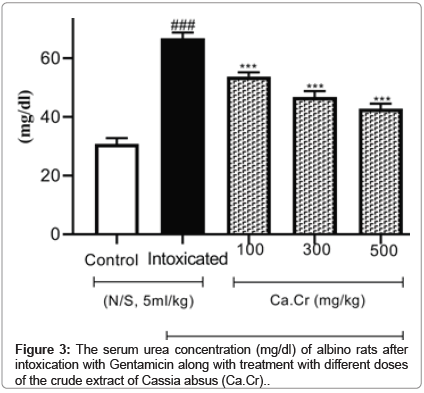 The acute toxicity profile of Ca.Cr showed no signs of mortality even at the dose of 10g/kg.

Aminoglycosides are commonly used in the treatment of severe bacterial infections caused by gram-negative bacteria. However, their clinical use is often related to the induction of renal toxicity. Gentamicin-induced acute renal failure is clinically characterized by an increase in serum creatinine and urea nitrogen levels, decrease in GFR, and urine osmolality [10]. In our present study, nephrotoxicity was induced in Wistar albino rats by using high dose of gentamicin (100 mg/kg; i.p for 7 days). This dose is considered nephrotoxic as discussed in other studies [6]. The nephrotoxicity was evident as the intoxicated group showed significant increase in renal biomarkers such as creatinine, urea and BUN as compared to the normal control. In renal toxicity, the inflammation of kidney tubules causes decrease in GFR leading to an increase in levels of metabolic waste products such as creatinine, urea and BUN [8]. The kidney weight of intoxicated group was also increased. The histological studies showed severe damage of kidney tubules in the intoxicated group as compared to control. The treatments groups administered with different doses of Ca.Cr showed protective effects against renal toxicity by showing decrease in serum creatinine, urea and BUN levels by improving the GFR as compared to the intoxicated group. These protective effects were also evident through the histological studies as damage of tubular epithelium was less noticable in treatment groups as compared to intoxicated group. Seeds of Cassia absus contain secondary metabolites including alkaloids, glycosides, saponins, ??avonoids, tannins, and terpenoids. Steroids and cardiac glycosides were also detected. . Seeds have also been reported to contain amino acids, gums, resins [11]. Seed oil is considered as a rich source of 9-Ketooctadec-cis-15-enoic acid and Palmitic acid is present in excess, as compared to other saturated fatty acids whereas, Stearic acid is present in lesser quantity [12]. The crude extract of Cassia absus (Ca.Cr) possess phytochemical constituents that have strong antioxidant potential as their activity is evident through their action in preventing the renal inflammatory cascades and providing a protective effect against gentamicin-induced renal toxicity.

The study provides a scientific evidence of nephroprotective potential of the crude extract of Cassia absus in gentamicin-induced renal toxicity model as Ca.Cr showed improvement in serum creatinine, urea and BUN levels dose-dependently. The findings also conclude that Ca.Cr has potential to prevent kidney injury and damage of kidney tubules due to the presence of strong anti-inflammatory agents such as flavonoids and phenols. However, further studies are required to explore the exact underlying mechanism.

The authors confirm that there are no conflicts of interest.

No funding support was provided by any funding agency.