Background: Extraction in the first line toxicology laboratory is the stage of analysis and diagnosis, the diagnosis process of the drug is completely dependent on the extraction method. New high-efficiency extraction methods, replace past practices. QuEChERS extraction method has already been introduced in pesticide extraction. In forensic toxicology, autopsy samples from the bodies to investigate the cause of death after extraction and analysis are interpreted by different devices.

Objective: In this paper, extraction of methadone drug substance by QuEChERS method was investigated in autopsy samples.

Results: Methadone recovery rates in urine specimens and contents of gallbladder were evaluated. The recovery rate of methadone analysis in the samples was found to be 65%-78% by the QuEChERS method (N = 30).

QuEChERS abbreviation of Quick, Easy, Cheap, Effective, Rugged, and Safe. Introduction in Forensic Toxicology, Extraction is usually done by Liquid-Liquid Extraction (LLE) and Solid Phase extraction (SPE). The SPE method is expensive because of the cost of the cartridge and the cleaning of the homogenizer probe creates a risk of pollution and cross-reactivity, and therefore the SPE method is somewhat tedious and time-consuming and cannot be performed in many centers, but the QuEChERS method is a simple method. , Fast and reliable [1]. This method is widely used to determine pesticides and was first introduced in 2003[2]. Anastassiades and colleagues first introduced this method in 2003 to extract veterinary drugs from animal tissue. An important step in the analysis of extracted toxicological samples is that liquid-liquid extraction and solid phase extraction are used as methods for pre-toxic analysis [3,4]. Preparation of the sample is one of the critical steps in the proper diagnosis of a wide range of drugs and toxins by mass spectrometric chromatography (GC-MS) and liquid-mass spectrometry (LC-MS) chromatography, which extraction methods such as protein deposition, LLE and SPE has been designed and used [5,6]. Clinical toxicology and forensic medicine are heavily dependent on the science of decomposition chemistry. Blood, urine, and solid tissue as alternative liquids for oral, hair, and meconium are commonly used for toxicology [7,8]. The liquid-liquid extraction method as well as the extraction method by sedimentation of proteins, in spite of simplicity, inadequate sample extraction and contamination of the tool reduces the value of these methods. The SPE method has a lower selective performance than the protein precipitation extraction (PPE) or LLE interactions, but this method is relatively laborious and time-consuming. The QuEChERS method was proposed for the analysis of legal toxicology [9]. The QuEChERS approach is similar to PPE and LLE in terms of simplicity and is also similar to SPE with high selective performance [9,10]. At the present time, the Cochrane method is used in analyzing the pesticide residues of chemical fertilizers in food products [9,11]. There are two major problems in the extraction of drugs in chromatography techniques: one is the involvement of a matrix, and another is the suppression of ions [12]. Generally QuEChERS extraction is based on extracting with a solvent such as acetonitrile or ethyl acetate and dehydration in the presence of salts such as magnesium sulfate and sodium chloride. It is mainly administered in the treatment of heroin addiction and has a morphine-like function [13]. Some methadone is metabolized to the 2-ethyldiin-1,5-dimethyl-3,3-diphenyl-pyrrolidine (EDDP) by the enzyme cytochrome P450 hepatic (CYP3A4). The EDDP ratio to parametric methadone is used in the diagnosis of long-term and short-term treatment [14]. But EDDP as an artificial side effect is also the result of high temperature GC effects on methadone [15].

Sampling and extraction of samples by QuEChERS method

Urine samples, contents of the gallbladder bodies were dumped in accordance with legal requirements and according to their records at the site of forensic medicine. It was kept in order to avoid secondary variations until the time of doing it at a negative temperature of 20°C

For analyzing the gas chromatography model 7890A, connected to the Agilent mass spectrometer Model 5975C equipped with a column of 30 m * 0.25 mm * 0.25 μm, which was used as a fixed phase with 5% phenyl methyl. The oven temperature increased from 60°C to 280°C at a temperature of 10°C and was kept constant at 280°C for 10 min. Helium gas was used with a purity of 99.999 at a flow rate of 1ml/ min and a mass energy of 70 ev. Split less injection mode and runtime length of 30min. Methadone identification was performed based on ion index and SIM method Table 1. The results were evaluated using the index ion and mass (m/z) with the Wiley7n.1 library software, GC-MS device (Figures 1 and 2). Figure 1: Methadone analysis based on index ion in GC-MS. Table 1: Specifications of analyte and index ions in GC-MS.

Selectivity: Selectivity is the ability of an analytical method to detect and measure the analyte in the presence of other endogenous components within the sample (2).

Carry-over effect: During the validation process, the injection of a standard methadone sample containing 100ng/ml of a solvent of ethyl acetate or methanol-free methadone was injected, which revealed the results of the lack of recognition of methadone in the solvent.

Limit of Detection (LOD) and Limit of Quantitation (LOQ): Based on the signal to noise ratio, noise was measured by comparing the signals. A typical standard concentration sample was used to determine the minimum concentration level in which the analysis was performed. Signal-to-noise ratios of 3:1 and 1:10 were considered acceptable for LOD and LOQ, respectively. LOD and LOQ values were 29.1 ng/ml and 97.3 ng/ml, respectively [16]. The reason why the LOQ values obtained from legal data are higher than the published material is that most of the data are reported by MSL (LC-MS) chromatography with high pressure fluid (HPLC), which is used to analyze and Drug analysis is very sensitive [17]. Nevertheless, GC-MS is described as a useful method for analyzing legal and clinical cases due to its high repeatability in the diagnosis of opioids, Lerch et al. [2,18].

Precision: The precision of the analytical method describes the closeness of the individual measurements for an analyte. The exact daily data was measured by analyzing the area of the surface below the level of the analyzed analyte in the three levels of the following standard internal scale at three different concentrations (low of 62.5, average of 250 and above 2000 ng/ml). For the calculation of daily precision, the values of three concentrations injected for three consecutive days were used and CV% of the individual concentrations were obtained. The CV% represents the precision of the method, and the less the accuracy of the method is higher (Table 2).

Table 2: Methadone validation and its results.

Accuracy: Accuracy is an analytical method; the closeness of the determined value from the method to the true concentration of the analyte is described as 50%. The accuracy of the data is based on the calculation of the recovery rate obtained from different concentrations of the sample. The recovery rate set by the ICH for testing accuracy is 80 to 120 percent (International Conference on Harmonization, 1995). To perform the recovery test, three different concentrations (low 62.5, average 500 and above 1000 ng/ml) were added to the gallbladder three times a day from standard methadone solution to homogeneous urine specimen. After extraction by QuEChERS extraction and liquidliquid extraction, the samples were injected into the GC-MS machine and the percent recovery was calculated. Accuracy is through the addition of methadone to the body samples (urine, contents of the gallbladder and liver), which had already been negated by methadone.

The recovery rate of methadone analysis in different samples in the QuEChERS method was 65% -78% (Graph 1). Usually recovery methods should be between 80% - 120%. According to Anzillotti et al., For QuEChERS, recovery of 60-70% for intermediate and nonpolar compounds is acceptable [19]. 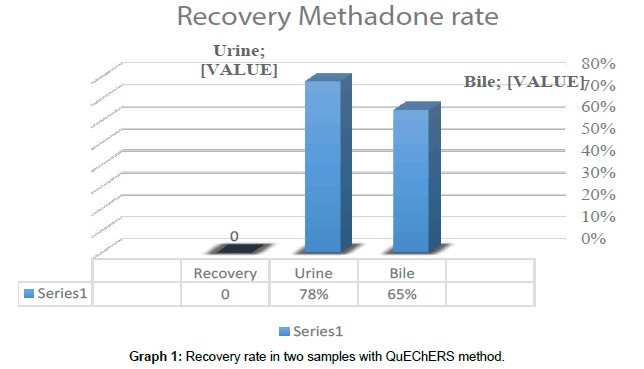 The most commonly used method of extraction is in most of the LLE forensic centers. Due to the large volume of required samples and the high amount of solvents that require a lot of time and money, along with other problems such as inadequate extraction of samples and contamination of tools and the environment, the value of this The method is reduced [9]. Potential properties of carcinogenicity and mutagenicity of compounds such as chloroform and ammonia are a threat to the health of staff and experts in forensic centers; in addition, the use of high volumes of solvents and environmental chemicals also threatens human society. As a result, finding an efficient way with lesser risks along with a greener and nonpolluting environment will force us to use new methods such as SPE and QuEChERS method. QuEChERS was approved as a sensitive, renewable and relatively simple method for qualitative and quantitative analysis of drugs and drugs. Since this method does not require specific equipment and requires less time, it shows that it has great potential for analyzing clinical and legal samples 2. In the case of samples such as the liver, kidney, lung, muscle tissue and adipose tissue, more needs to be done for the preparation process to increase the use of developed methods in clinical and legal toxicology [20,21]. The high LOQ values obtained from legal data in comparison with printed materials is that most of the data in the articles have been reported by LC-MS high pressure liquid chromatography (HPLC), which is used to analyze drugs It is very sensitive [17]. However, in a study by Lerch et al., GC-MS is a useful method for legal and clinical diagnosis of narcotics due to its repeatability [2,18]. Therefore, with these changes during these years, the Cochrane Extract Method has become capable of becoming an inclusive approach to the separation of many drugs and drugs.

Most articles and outcomes of the study are on non-corpuscular samples and for launching and extraction methods but bodies of bodies are not fully applicable to post-mortem samples due to phenomena such as post-mortem corruption, post-mortem distributions, post-mortem distribution, and so on. It also requires access to body samples that complicate the legal and legal barriers. In this study, there was no significant difference between the results of the detection of methadone found in body samples in terms of clinical, legal, and judicial analysis of cases; As a result, due to higher methadone recovery in the QuEChERS method, this method can be a better alternative than liquid-liquid extraction (LLE) in post-mortem samples.

In the results of this thesis, there was no conflict with legal and legal issues.

The cost of this thesis was completely personalized and with the scientific support of the Department of Toxicology, Faculty of Pharmacy, Jundishapur, Ahvaz, and the Legal Medicine Organization of Khuzestan-Ahvaz Province and the Toxicology Group of the Pharmaceutical Sciences University of Islamic Azad University, Tehran.

At the end of the family, Stahid and friends who helped me in this study, I have the great thanks.