1Department of Surgery I, University of Fukui, Eiheiji 910-1193, Japan

A 59-year-old male with the chief complaint of bloody stool underwent transanal tumor resection for an anorectal malignant melanoma. Rectal amputation and inguinal lymph node dissection were not performed due to severe anemia with platelet depression and poor general condition. After the operation, treatment with an immune checkpoint inhibitor was started. A gait disturbance was diagnosed as postoperative inflammatory neuropathy based on a nerve biopsy. As steroid treatment was necessary, the immune checkpoint inhibitor was discontinued after a single dose. Tissue diagnosis identified the BRAF gene mutation, and combination therapy with dabrafenib/trametinib was started. Abdominal contrast computed tomography on day 30 and 101 after the start of medication showed decreased right inguinal lymphadenopathy and a partial response (PR) was determined based on the response evaluation criteria in solid tumors (RECIST). Anorectal malignant melanoma is rare. We report a case of anorectal malignant melanoma in which dabrafenib/trametinib combination therapy was effective.

A 53-year-old male presented with a chief complaint of bloody stool. Colonoscopy showed a 3-cm type 1 tumor on the dentate line and anorectal malignant melanoma was diagnosed on biopsy (Figure 1). Abdominal computed tomography (CT) and magnetic resonance imaging showed enlarged right inguinal lymph nodes (Figure 2). No metastasis was revealed in the liver or the lungs on CT and fluorodeoxyglucose-positron emission tomography (Figure 3). Severe anemia and platelet decline were observed (hemoglobin 8.6 g/dL, platelets 30,000/dL). Rectal amputation was considered difficult due to poor general condition and platelet decline, and transanal tumor resection was performed for hemostasis. After the operation, treatment with an immune checkpoint inhibitor was started (Nivolumab 3 mg/kg). A gait disturbance was observed on postoperative day 5. The cause of the gait disturbance was diagnosed as postoperative inflammatory neuropathy on nerve biopsy, necessitating systemic steroid administration. Therefore, the immune checkpoint inhibitor was discontinued after a single dose. In addition, tissue diagnosis identified the BRAF V600E gene mutation and combination therapy with dabrafenib/trametinib was started. Steroid treatment for the inflammatory neuropathy was performed in parallel [3]. The gait disturbance improved, and the steroid was able to reduce dose. Prominent right inguinal lymphadenopathy was reduced on abdominal contrast CT on day 30 after the start of treatment, and a partial response (PR) was determined by RECIST (Figure 4). In CT of day 30, there was a possibility of the therapeutic effect of the immunity checkpoint inhibitor, although it was administered only once, furthermore, we confirmed further lymph node reduction with CT of day 101. Based on these findings, the effect of dabrafenib/ trametinib combination therapy was judged as PR. Fever of 38°C was observed on day 45 after the initiation of treatment, but responded to symptomatic therapy. There were no other obvious adverse events. 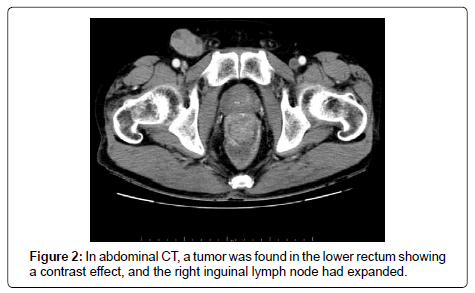 Figure 2: In abdominal CT, a tumor was found in the lower rectum showing a contrast effect, and the right inguinal lymph node had expanded. Figure 4: Right inguinal lymph nodes were reduced to prominent by abdominal contrast CT on day 30 and 101 after the start of treatment.

Malignant melanoma is common in dermatology and ophthalmology, and is also found in the gastrointestinal tract 2). Anorectal malignant melanoma was first reported by Moore and is relatively rare, accounting for 0.38-1% of anorectal malignant tumors and 0.1-2.5% of all malignant melanomas [3]. It causes early liver, lung, brain, and lymph node metastasis, and the prognosis is considered poor [2,4]. Surgical treatment is basically resection, with rectal amputation and lymph node dissection, although partial resection may be performed. A standard surgical procedure has not been established. A systemic review showed no difference in the survival rate between rectal amputation and local resection, suggesting that this is a systemic disease, and that surgery alone is inadequate [5].

From the fact that surgical treatment is fundamental and anatomical characteristics, gastrointestinal surgeons often treat. Report cases of surgical treatment are found, but there are few reports of adequate treatment with unresectable advanced malignant melanoma. In the present case, local surgery and antitumor agents were chosen due to the poor general condition with severe anemia and decreased platelets, and systemic chemotherapy was done. Combination therapy with the BRAF inhibitor dabrafenib and MEK inhibitor trametinib has been shown to significantly prolong progression-free survival and overall survival in advanced malignant melanoma with the BRAF V600 mutation 1). In this case, after the start of dabrafenib/trametinib combination therapy, a fever of 39°C was observed on day 45 of treatment, but a tumor-shrinking effect was observed without discontinuing treatment. Postoperative inflammatory neuropathy required systemic steroid administration. Although prednisolone was administered at a maximum of 40 mg/day, dabrafenib/trametinib achieved adequate therapeutic efficacy. Based on our experience, systemic steroid administration may not interfere with dabrafenib/trametinib, and systemic steroid was considered an option for adverse events caused by dabrafenib/trametinib. It is essential that treatment not be delayed by adequate management of adverse events.

Combination therapy with dabrafenib/trametinib for patients with advanced malignant melanoma and the BRAF gene mutation shows a response rate of <70%, and appears to be tolerated for 13- 14 months before exacerbation [6-8]. Upon confirming maximum clinical effect, a change to other treatments is recommended in the NCCN guidelines [1]. The maximum clinical effect is reached when the therapeutic effect peaks, and subsequent treatment is reconsidered before confirming disease progression. In our case as well, we had to consider treatment policy in anticipation of future PD. A few cases of successful systemic chemotherapy have been reported [9]. At this time, systemic chemotherapy and read ministration of immune checkpoint inhibitors are options for future treatment. In addition, the mechanism of resistance to BRAF inhibitor therapy may be reversible, and efficacy has reportedly been restored by read ministration after a sufficient period of time [10-13]. In other words, it is possible that disease control can be obtained by read ministration of a BRAF inhibitor after a single course of treatment. On the other hand, it is has also been reported that the overall survival time in the group that discontinued medication is significantly shorter with a change to PD during administration of a BRAF inhibitor, compared to that in a group that continued medication [14]. Therefore, if dabrafenib/trametinib is changed to PD and no treatment option is available, or when further response is not expected, dabrafenib/ trametinib combination therapy (“beyond PD can be a treatment option [15].

We experienced a case in which combination therapy with dabrafenib/trametinib was successful against unrespectable anorectic malignant melanoma. To our knowledge, there has been no similar report, it is desirable for this literature to be useful for gastroenterologists.