India is the third largest producer and consumer of electricity. Electricity is generated from different sources like nuclear, hydro, thermal power plant etc. In spite of this power generation there is a shortage of electricity. There is a search for alternate source of electricity to match the shortage of electricity Fossil fuels will be exhausted over a period and there is a need for alternate source of energy. Solar energy, the natural source predominantly available has been used in many traditional technologies over the centuries and has been widely used in the absence of other energy supplies. The solar tracking system is the most effective technology attached with solar panels to improve the efficiency of solar panels by tracking and following the sun's movement. Solar panels can align themselves in the direction of the sunlight to harvest more energy from sunlight. An automatic solar tracker helps by allowing the solar panel to automatically shift with sunlight. An IoT based energy efficient solar tracker senses the sun’s position and moves accordingly. The system is developed with two-axis solar-tracking using Arduino Uno as main controller. The power gain and system power consumption are compared with a static and continuous dual axis solar tracking system. It is found that power gain of hybrid dual axis solar tracking system is almost equal to continuous dual axis solar tracking system, whereas the power saved in system operation by the hybrid tracker is 44.44% compared to the continuous tracking system.

Internet of Things (IoT) has evolved as a global infrastructure that connects things/objects over the internet through the traditional and latest interoperable communication technologies [1]. IoT includes all the devices/things to sense the information from the surrounding environment using embedded sensors, process the information through microcontrollers attached and transfer the processed data over internet through communication interface. IoT has made its footprints in almost all the fields namely smart buildings, healthcare, wearable’s, agriculture, etc. Renewable energy sources and harvesting renewable energy gained interest during recent years. This is due to continuous increase in consumption of global nonrenewable resources, to reduce or avoid environmental pollution and limitation of the fossil fuels reserves. Across the world, there is an unavoidable shortage of fossil fuel sources in the future; renewable energy sources have gained interest among researchers, technicians, investors and decision makers [2]. There are various renewable energy sources like hydroelectricity, bioenergy, solar, wind and geothermal energy, tidal power and wave power Because of their renewability these resources are considered as favorable replacements for fossil fuel sources. Sun is the natural source with Photovoltaic (PV) energy, the most available resources as well. In current scenario, this technology has been adopted more widely for residential use and is cost effective. According to International Energy Agency (IEA), since 2000, there is an enormous growth of PV capacity across the globe. In near future, solar PV energy is highly expected to become a major source of power.

However, there are many merits in PV energy; solar PV energy is still far from replacing traditional sources on the market due to certain challenges faced during deployment. It is still a challenge to maximize power output of PV systems in areas that don’t receive a large amount of solar radiation [3]. More advanced technologies can be incorporated to improve the capability of PV materials, the latest technologies can be adopted but changes in the system design and module development must be a feasible approach to make solar PV power more efficient and resulting as the best choice for the customers.

IoT based solar tracking system is to be built as a prototype model for a small scale. This design shall be applied to any solar energy system that is currently in practice. This system is also compared with fixed mounting method to quantitatively measure the effectiveness of the tracking system.

An important energy source that can produce clean energy is Solar PV Systems. Solar PV is used in solar trackers to boost the energy gain. The solar PV is integrated with solar tracker to increase the absorption of sunlight resulting in high energy production. The factors such as framework size, rates of electric, land limitations, government motivations, scope and climate influence the efficiency of sun based tracker. The tracker devices can be broadly classified into single and double axis devices with respect to solar panel alignment. In single axis devices, panel is rotating either in horizontal or vertical axis and tracking the sun light in one direction. In double axis, tracker device rotate both in horizontal and vertical direction to ensure that the panel is perpendicular to the suns ray. Double hub tracker to locate the mirror and divert and divert daylight along a fixed hub towards a fixed beneficiary. Ubidots IoT platforms are used in developing IoT based dual axis solar tracker. The tracker is connected to internet through Wi-Fi ESP8266 board to display details including voltage, current and power. Single axis solar tracker is enhanced by the authors and the data like voltage, current and power are uploaded in cloud server of Thing Speak IoT platform. Arduino UNO based solar tracking system that orients solar panels to the sun’s path to capture maximum energy. Two axis solar tracker was developed with light dependent resisters and servo motors. This system is connected over internet through WiFi module. The system is compared with single axis solar tracker and the results proved that more power is generated.

The proposed solar tracking system is to develop a low cost IoT solution to track solar panel in dual axis mode to generate more power. A low cost arduino UNO board with LDR sensors and servo motors are used to align solar panel with respect to sun light. 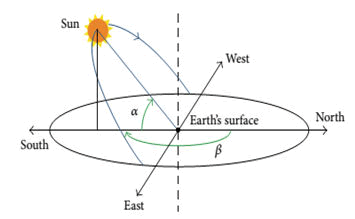 The inverse-square law is used to determine the "fall off" or the difference in illumination on a subject as it moves closer to or further from the light source. The inverse square law is expressed as 1/d2 where d equals distance in Astronomical Units (AU) to the spacecraft as compared with Earth’s distance to the sun. Sun stays lower in the sky during winters than summer months [4]. Therefore, in these months orientation of solar panels has to be more vertical, as solar rays will have to pass through more atmospheres to reach the panels. During summer months, the sun stays much higher in the sky, therefore, it has to travel less distance to reach earth’s surface. So, horizontal orientation of solar modules can easily work efficiently in harvesting solar energy in these seasons.

The modules of the power hour – IoT based solar tracking system are discussed in brief in this section (Figure 2). 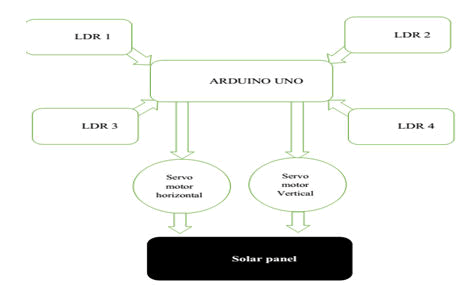 Four Lights Dependent Resistors (LDRs) are used to measure the intensity of light are placed on a common plate with solar panel. Light rays from the sun strike in different angle and vary by different amount. LDRs have the property of decreasing resistance with increasing incident light intensity, i.e. photoconductivity [5]. Due to this property, the value of resistances of all the LDRs is not always same. Based on the incident light, each LDR sends equivalent signal of their respective resistance value to the Microcontroller which is configured by required programming logic. With respect to a LDR, other values are compared. Two dc servo motors are attached mechanically with the driving axle so that two motors mutually control the motion. The former servo motor axle is used to drive a solar panel. The two servo motors are fixed in such a way that the solar panel can move along X-axis as well as Y-axis. LDRs send signals to the microcontroller which in turn controls the servo motors. The servo motors are used for tracking the movement of solar panel along x-axis and y-axis respectively (Figure 3).

The circuit diagram of the proposed system which starts from solar panels that face sun based on servo motor response from LDR input. The movement of the panel is changed to different direction based on the light intensity received and it is illustrated in the flowchart shown in (Figure 4). 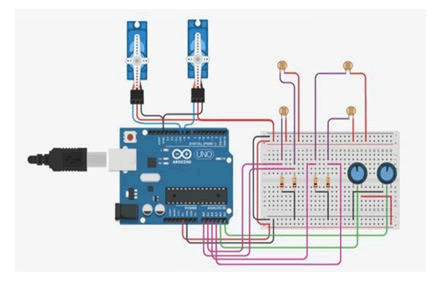 An open source electronics platform, Arduino is a easy-to-use hardware and software. Arduino uses ATmega368 controller with 14 computerized input/yield pins. Among those pins, 6 can be utilized as PWM yields, 6 simple information sources, a 16 MHz artistic resonator, a USB association, a power jack, an ICSP header, and a reset catch (Figure 6). A self-contained electrical device servo motor is able to rotate the parts of a machine attached to it with high efficiency and with great precision. The unique feature of server motor when compared with regular motor is that output shaft can be moved to a particular angle, position and velocity.

Light dependent resistors, LDRs or photo resistors are used in electronic circuit designs where it is necessary to detect the presence or the level of light [6]. A photo resistor or light dependent resistor is an electronic component that is sensitive to light. The resistance of LDR decreases with increasing light intensity. The relation between resistance and the light intensity for a LDR is given by the equation 1.

Where RL is the resistance of LDR and Lint is the light intensity. 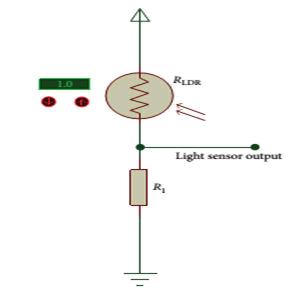 When the system is switched ON, all the sensors and servo motors are into the actions. When the light intensity is increased on the LDR Sensor, the signal is sent to the Arduino and it guides the two servo motors to better place the solar panel. The prototype version of power hour is developed with the Arduino and other components are integrated using breadboard (Figure 8). The LDR is soldered in the corners of the solar panel so that the maximum area of solar rays is observed and making the system easy to move in all direction. If the left top and right top get more sun rays the solar turns to angle of 15 degree [7-12]. If top left and bottom left gets more rays then solar panel is turned to an angle of 180 degree. If bottom right and top right gets more rays the panel is turned into 65 degree. The panel turns according to the sun light.

The prototype model developed is tested by placing it outdoor for three days and the voltage is recorded at frequent interval of time. The results showed that the voltage increases from 9.52 V to 9.59 V and in later part of the day the voltage remained constant as shown in (Figure 9). 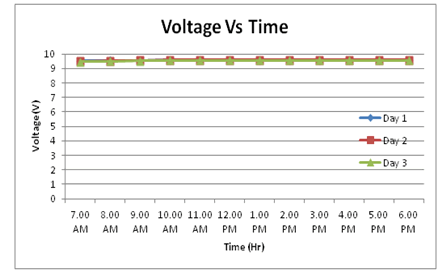 Also graph is drawn with respect to current and time. The current remains constant throughout the day (Figure 10). 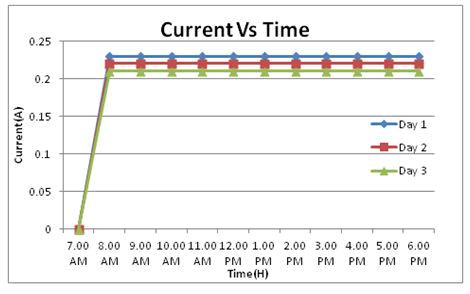 A simple and efficient IoT based dual axis solar tracker system is developed. The prototype version is successfully developed and tested experimentally. This is a simple and successful application for monitoring the parameters of solar trackers for further processing and management. This system is cost effective and shall be used for research or educational purpose.