In Mu Us sandy land, China, moderate salt accumulation may be occurring even without salt load from out-side region though irrigation in inter-dune lowland because of the flatness of the land and recent agricultural development which increases the use of chemical fertilizer. Salinity of soil and groundwater were measured in relation to the depth of groundwater. Results show that the shallower the groundwater table was, and the closer to the center of inter-dune lowland was, the higher the salinities of both topsoil and groundwater were. Salinity of groundwater was higher below grassland than bare field if the depth of the groundwater table was the same. Salt accumulation toward topsoil of the lowland may be sustained by horizontal supply of groundwater from dunes. More attention for salinity should be paid for sustainable agricultural development of the land.

Salinity is a major threat for the sustainability of agriculture in arid and semi-arid regions. According to FAO, salinity is already causing yield reduction in 37 million ha, nearly one-third of upland-irrigated farmlands, all over the world [1]. Qadir et al. [2] estimated that the global annual cost of salt-induced land degradation in irrigated areas is 27.3 billion USD because of lost crop production. Not only irrigated agriculture in which salts are imported from other area through canal, primary salinization also often limits and threatens land productivity in pasture and rain-fed farmland in arid and semi-arid regions. Mu Us sandy land, located in Ordos plateau and covers an area of about 40 × 103 km2, would be such an example. Projects for the fixation of shifting dune and afforestation have been undertaken for decades, which have been enabling intensive and modern farming in former inter-dune lowlands. Zhang et al. [3] reported significant increase in NDVI was detected in 68% of the area. However, since the region is quite flat and few drainage systems have been constructed, attention for salinity hazard in the area should be paid for sustainability. Some parts of the area are inherently so saline that there are salty lakes and soda factories. Being a highland, there is no canals from outside. Even without salt load though canal system, the intensive use of chemical fertilizer may increase salinity in the land and groundwater in time. This area has unique original landscape of a contrasting combination of drifting sand and wetland between dunes. The unique landscape has interested many hydrologists and soil scientists. Li and Li [4] investigated the amount of evaporation from the surface of sand dune and evapotranspiration from inter-dune grassland. Yu et al.; investigated the effect ofvegetation on deep penetration after rainfall in the area. Cheng et al. [5,6] analyzed the response of groundwater level to root water uptake in the area. Cheng et al. [7] reported the response of water content in deep layer to precipitation in the area. Zhang et al. showed a decreasing trend of groundwater table in the area probably owing to the increase in vegetation cover. Sun et al. [8] evaluated the effectiveness of crashed soft rock as an amendment on yields of corn in the sandy field. Nevertheless, few studies on the salinity and groundwater flow dynamics in Mu Us sandy land have been carried out so far. It is often stated in textbooks of land management that shallow groundwater table often causes severe salt accumulation near the soil surface in dry lands (e.g. Ayers and Westcot, 1985; Hillel, 1998, Jury and Horton, 2004). Still, the evidences of correlation between groundwater depth and salinity of surface layer have not been sufficiently presented. In Mu Us sandy land, reclamation to cropland would be mainly carried out in the lowland, but it may be too saline for major crops although vegetation seemed plenty. Therefore, we carried out survey on soil and groundwater salinity in the area in 1993. In this study, we report the relationship between salinity of soil and groundwater and groundwater depth and discuss the dynamics of salts and water under dune and inter dune lowland. The data are old and may not represent the current typical status of the land, but those data would be useful as the baseline before intensive dune fixation and vegetation-restoration programs and for better management of groundwater and salinity in the region.

In mid-August of 1993, the soil and groundwater samples were taken at in inter-dune lowlands around development and management research center in the Mu Us sand land (38°58'N 109°7'E) in Wushen banner (Figure 1). The area has mean annual precipitation of about 350 mm and precipitation mainly concentrates in summer [5]. The annual average temperature is 6.2. The elevation of the area is around 1300 m. 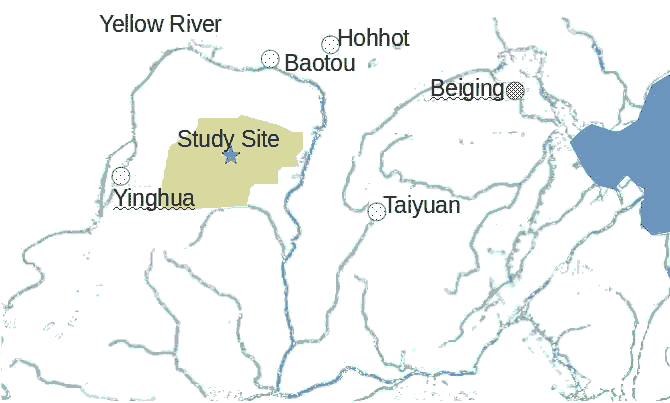 Salinity in the top layer

Figure 2 shows examples of water content and salinity profiles at two locations in same interdune lowland having different depths of groundwater table. Soil surface having shallow (about 40 cm) groundwater table was wet and salts accumulated in top 5 cm. This is a typical profile of salt content above shallow groundwater due to high evaporation rate from the soil surface. Salts were built up beyond the limit of tolerance of root water uptake of glasses. In contrast, soil surface having deeper (about 80 cm) groundwater table was nearly air-dry and the values of EC of saturated extract were low across the profile. Mean salinity in the top 15 cm, which is main root zone of glasses, clearly decreased with the depth of groundwater table as shown in Figure 3. The necessity of lowering groundwater table using tile drainage system is stressed in many textbooks [9-11], but evidences to rationale the instruction of keeping groundwater deep have not been sufficiently reported. This Figure 4 could be one of evidences to strongly support the instruction. Linear regressions gave high correlation coefficients, but the slopes were largely different from lowland to lowland even though the two inter-dune lowlands were located within 1 km each other. Both lowlands were nearly bare surface owing to intensive glazing. This large heterogeneity may be caused by various factors such as Figure 3: Mean salinity in top layer as a function of the depth of groundwater table. 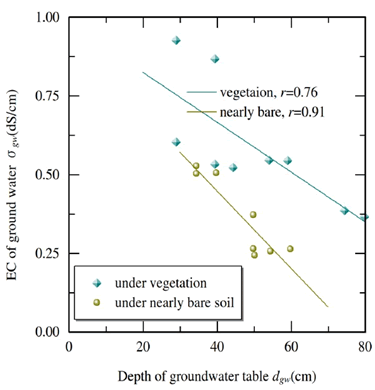 Figure 4: Salinity of ground water as a function of the depth of groundwater.

Soil hydraulic properties, the areal ratio of dune and lowland or elevation difference to other lowlands. Top layer of the lowland A was finer and dark until the depth of about 10 cm while that of B was almost the same as coarse and light-colored dune sand. In general, fine soil can sustain near-maximum evaporation rate which is close to reference ET at low groundwater depth [10].

Dynamics of water and salts under dune-lowland system

Upward flow of water and high ET in the lowland cannot sustain without horizontal supply of groundwater from dune. Because the region is quite flat and not surrounded by mountains, the only possible source of the supplied water is groundwater below dune. Ikeura et al. [12] reported that groundwater normally flew from dune to lowland except for just after rain in the area. Evaporation rate from sand tends to be lower than that from fine textured soil owing to low field capacity and extremely low water diffusivity in the water content range below field capacity [13]. Li and Li [4] also revealed that evapotranspiration from the lowland was far greater than that from dune. In other words, bare sand surface has a positive role to supply water like run-off area in a water-harvesting system. Shift of dune must be controlled, but bare sand surface should be kept around appropriate ratio to allocate more water from precipitation to more profitable crops than shrubs. Figure 5 is schematic diagram of the dynamics of water and salts under dune-lowland system. That land may be modelled as a quasi-closed system in which downward input of water in dune flows into lowland and consumed there. Salts are transported with water and concentrated in the topsoil of the center of the lowland. As reclamation for irrigated cropping progresses, groundwater table will fall and concentration below the former lowland will further increase considering mass conservation. To evaluate the possible increase in salinity with falling table, the depth of impermeable layer should be surveyed. Impermeable layer plays an important role in sustaining the shallow ground water and its dynamics. Even if wells are dug below fixed dune where EC is initially low, reverse flow toward the well may cause a rise in EC in time. EC of groundwater should be monitored to avoid salinity hazard as well as ground water depth.

We measured the salinity of topsoil and groundwater in inter-dune lowland in Mu Us sandy land, China, where moderate salt accumulation may be occurring even without salt load from outside region though irrigation in inter-dune lowland because of the flatness of the land and recent agricultural development which intensifies the use of chemical fertilizer. Results showed that the shallower the groundwater table was and the closer to the center of inter-dune lowland was, the higher the salinities of both topsoil and groundwater were. Salinity of groundwater has higher below grassland than bare field if the depth of the groundwater table was the same. Salt accumulation toward topsoil of the lowland may be sustained by horizontal supply of water from dunes. More attention for salinity should be paid for sustainable agricultural development of the land.

This research was supported by JSPS KAKENHI grant number 19KK0168.