In this paper we present the sensitivity analysis on regime switching models applying the techniques of Malliavin calculus. As is well known, risk management in portfolio pricing and hedging is often achieved by estimating the Greeks, which are price sensitivities relative to variations in the model parameters. By developing this method for sensitivity analysis, we have multiple versions of Greeks expression, optimization by minimizing the variance of weight is available among those alternatives. Although the classical Malliavin calculus approach requires the differentiability of the payoff function, we extend the results for models with non-differentiable payoff function.

Emerging interests focus on sensitivity analysis with its wide application in risk management, especially for hedging strategy. In particular, Greeks are the sensitivities with respect to parameters in the generalized Black-Scholes’ models. Starting from Fournié et al. [1], Malliavin calculus is applied for computation of Greeks such like Delta (Δ), Rho (ρ),respectively representing the sensitivities of option value to spot price, risk-free rate. Via this approaches, fast algorithms for Greeks computations are designed. Following the method initiated on the Wiener space in Fournié and El-Khatib et al. [1,2] calculates the Greeks in a model of jump process driven by Poisson jump times. By Debelley et al. [3], sensitivities in a jump diffusion model are computed by using the Malliavin calculus. By Davis et al. [4], Malliavin calculus is applied for Levy processes and integration by parts formula is developed for Greeks calculation, where the computational effciency is assessed by comparison through Monte Carlo simulation. Using the Malliavin calculus on Poisson space, [5] computes the sensitivities for European and Asian options simulated by jump type diffusion. Applying the Malliavin calculus in time inhomogeneous jump-diffusion models, Denis et al. [6] obtains an expression for the sensitivity Theta of an option price as the expectation of the option payoff multiplied by a stochastic weight. Also, Bayazit et al. [7] presents sensitivities for options when the underlying dynamic follows an exponential Levy process. For other recent works on computation of Greeks in asset price models, c.f. also Denis and Liu [8,9].

On the other hand, Regime-switching models have been introduced by Hamilton et al. [10] in discrete time and are among the most popular and effective risky asset models. The regime switching property is reflected in the changes of states of a Markov chain, which stands for the influence of external market factors. Intensive researches about asset pricing and trading are modelled with Markovian regimeswitching, such as Yao et al. [11], Kim et al. [12], Liu and privault [13,14]. In this paper we compute the Greeks by Malliavin calculus in a generalized Black-Scholes model with regime switching that reflects the underlying changes in the state of the economy and extend the results for models with non-differentiable payoff function.

Applying the Wiener-Malliavin calculus, we compute the sensitivities in the framework of the regime switching model (2) below. For any payoff function

with bounded derivative, value function V given by (3) below, and any

we show by Proposition 3.1 that

note that optimal choice of g for efficient Monte Carlo simulation is achievable, by Section 4, the choice of g such that g(i)=σ(i) for all i∈{1,…, m} minimizes the variance of the weight of Δ. Other Greeks like Γ, vega, ∧ are similarly computed in Subsection 3.2-3.4. Moreover we note that,

differentiating the payoff function φ inside expectation tends to be easier than our approach applying Malliavin calculus.

ii) In the right-hand of the expression (1), no derivative of the payoff function φ appears any more.

Based on these observations, it is tempted and necessary to relax the restriction of φ. Therefore, by Section 5, we extend the results to a class of non-differentiable payoff functions.

Consider a standard Brownian motion (Wt)t∈R+ and a Markov chain (αt) t∈R+, assume that they are independent and the Markov chain αt has a state space M={1,…, m}.Consider the stochastic process (Xt)t∈R+ given by the following SDE:

Where (Xt)t∈[0,T] follows SDE (2), r>0 denotes the risk-free rate. Then we proceed to compute the sensitivities of V(x0, 0) to the changes of coefficients in this model, such like X0=x0, μ, σ and even Q-matrix. To begin with, we recall some Malliavin operators. For any random variable F∈L2(Ω,P) of the form:

For t∈[0,T]. For any deterministic function g : MR we define

Computation of the Greeks based on the Partial Malliavin Calculus

and has bounded derivative, extension to non-differentiable payoff function will be shown in Section 5.

Variations in the initial price

The sensitivity of value function (2) to the initial price X0 is given by the following proposition:

Proposition 3.1 For any payoff function

First we check that the right-hand side of (7) is well defined by the following points,

ii) We show that

and Eφ(XT)2]<∞ for φ is a bounded function, we claim the integrability of

For the left-hand side, we need to show that V(x0,α0) is differentiable with respect to x0. Since φ has bounded derivative, there exists a K0>0 that

which is uniformly bounded by an integrable random variable XTK0/x0.

Therefore by V(x0,α0) is differentiable with respect to X0=x0 and

Since the payoff function

and is in form of (2), we have the following chain rule: 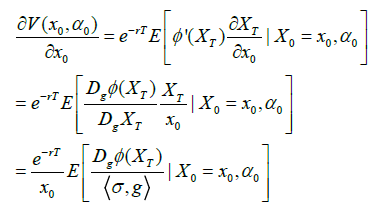 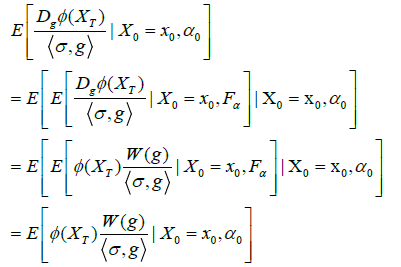 Variations in the initial price for second order

As in most context, the second derivative of the value function with respect to the initial price is denoted as . Similarly, we have,

Proposition 3.2 For any payoff function 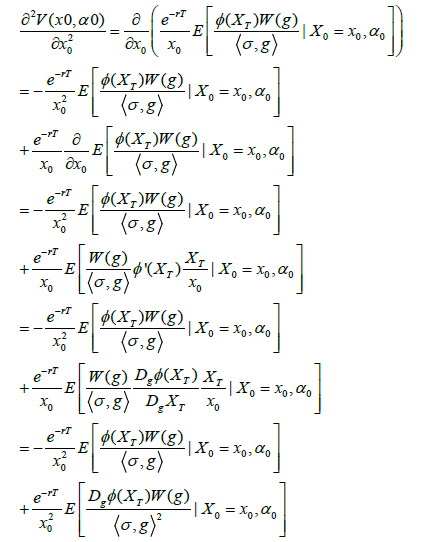 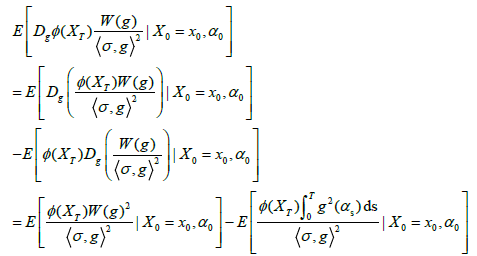 where in the last line we applied the integration by parts formula. Substituting (14) into (13), we see that

Variations in the diffusion coefficient

The variations in the diffusion coefficient is denoted as Vega, precisely,

where σ is a constant parameter. In our model, σ(.) is a function on M, so there is no direct way of derivative. Instead, we introduce the perturbed process:

Then the variation in the diffusion coefficient is given by

For t∈[0,T], we compute Vega by the following proposition.

Proposition 3.3 For any payoff function

Proof. By the integration by parts formula and chain rule we have, 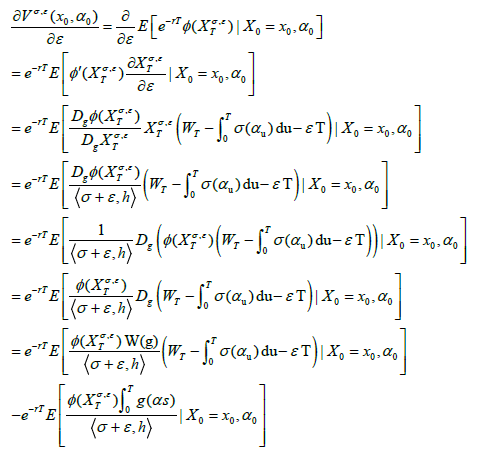 Variations in the drift coefficient

Similarly, we introduce the perturbed process for drift coefficient:

and the value function

Accordingly, we have the solution to (20) as follows,

Through a similar computation as that of Vage, we have the derivative of Vμ,ε(x0,α0) with respect to ε: 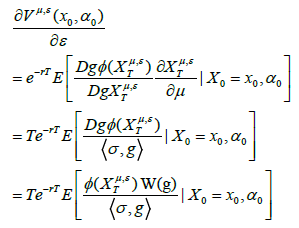 for any deterministic function g : M → R and ε∈R. Therefore, we have the following Proposition 3.4 for Lambda.

Proposition 3.4 For any payoff function

In this section, we aim at figuring out an optimal choice of g for efficient Monte Carlo simulation. Based on the computation of Theta in a jump diffusion model, Proposition 4.1 of Denis et al. [6] minimizes the variance of the weight of Theta. In our model, there exists such a problem too. We can minimize the weight by choosing a optimal g ∈ G. We gain a similar conclusion to that in Denis et al. [8].

with the isometry property of W(g), we have 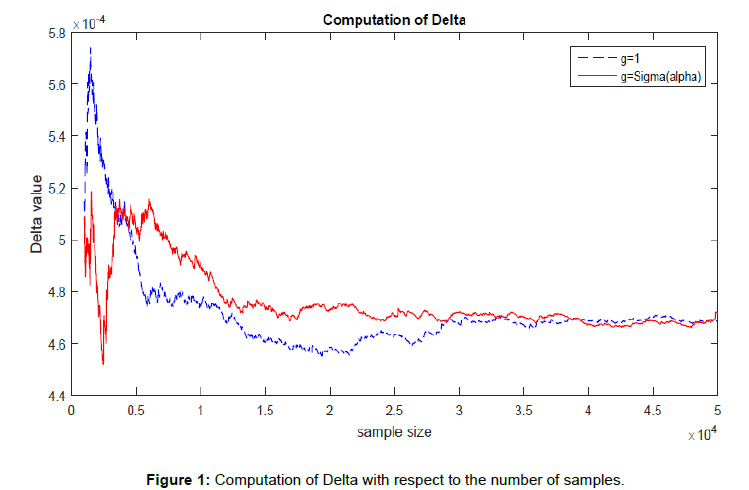 Figure 1: Computation of Delta with respect to the number of samples.

Ai are intervals of R},

Proposition 3.4 For any payoff function

Without letting φ bounded, we can also show that φ(XT) is integrable. Since φ is continuous, by (27) we see that 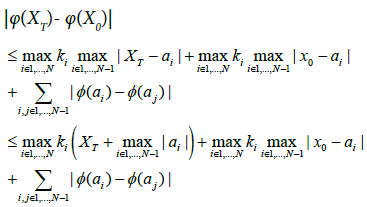 which is integrable, hence the integrability of φ(XT) is proved. On the other hand, without the bounded derivative of φ, we also show that (10) holds, namely,

which is uniformly bounded. Therefore, (29) is proved by Lebesgue’s dominated convergence theorem and we have

by repeating the arguments from (10) until the end of Subsection 3.1.

(ii) Finally, we extend from

to the class ∧(R). We will structure a sequence

is continuous on every interval (ai-1, ai), i=1,…,N, there exists a point wise increasing sequence

such that for n≥Nx we have

we see that, for any n≥Nx 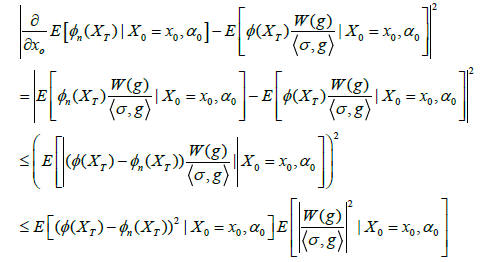