This study examines the training of future computer science teachers in the framework of subject training in the Cisco program. This method is used for specialized training of undergraduate students. Cisco was chosen for the study, which simulated a computer network to gain important skills and opinions when researching works. The purpose of this work is to enable students to study this issue for building computer networks. Students were given a task and, while working on the tasks, the students had what they were able to check. It was also necessary to introduce future computer science teachers to this method during their student years. During the
experiment, it turned out that students started by constantly asking for answers. Using the ICMP Protocol, we successfully transmitted information and were able to show it in the simulation. The process of changing OSI levels when transmitting information was also shown

Currently, it becomes more difficult for a teacher to provide knowledge on the subject of computer networks during certain classes, because the influence of the Internet attracts students with different work experience. For all students, it is difficult to give one approach to learning. In practice, we see that among students with comparative learning experience who know computer science and some opportunities to master professional skills in programs such as CCNA Cisco, you first need to start your first year of working in computer networks, but at the same time, students find it difficult to understand the term TCP/IP. In computer networking classes, many students can't understand the basic basic standard terms, which naturally makes their situation difficult. Many students found that the multi-layer model has its own difficulties, but students found that the model copes with this complexity and that the model has its own drawback. The students realized that independence in knowledge of computer networks is currently a problem for many students. It is extremely difficult for many students that there are ideas and ideas in computer networks.

We can also say that in comparison with the device, the organization of computer networks for practical use is very important. This also prevents them from creating their own network. Later, they may configurations, address the local. It is necessary to use simulation in computer network training and training to alleviate these problems. In addition, it requires certain knowledge to process. Computer network classes use a package for using the tracer.A simulated transmission in a packet is created offline. We know that Cisco is an international company that provides training, teaching, training and certification of computer networks on a commercial basis. The package, the software that has to register and attend training, is apparently expensive for them. The activating learning method is a query-based learning method where students develop themselves through activation [1]. This article describes the significant challenges associated with implementing query-based learning, and presents strategies for solving them through the development of technologies and training programs. We also presented a history of software and curriculum design to show how these problems occur in classrooms and how design strategies respond to them [2]. The article considers some well-known models of research training as a set of research processes that is the basis for collaboration in the NetCoIL scientific network[3]. In a study conducted as part of the teaching practice of computer science teachers, we tried to find out whether any of the approaches and activities used by these teachers correspond to the principles of query-based learning. The study examined how preschool teachers cope with these approaches to learning, what is the attitude of modern students to learning programming, how they like this topic and the various activities used in the classroom, and how this type of lesson is perceived by teachers themselves-teachers of computer science in preschool education [4]. Bell and others [5], investigated the main stages, which include problem definition and questioning, hypothesis, planning the design and implementation of experiments, analyzing need to learn how to use the method in practice, they need to experience it in practice as a student. In [6], it was shown that a student's creatively active approach to lessons is the main key to success. To do this, you need to know the modeling tools that allow you to use the observation method. Simulation software is designed to help learners of networking need to have an active learning experience and students can bring a fruitful classroom environment to make it more interactive and effective. In the work[7], software was made that was very useful and economical for students. The study found that there are several network modeling tools available for network modeling [8]. In work [9], Packet Tracer was investigated based on the experience of teachers and students, which provides many advantages. The article [10] studied the main problems in teaching students network technologies using Cisco Packet Tracer. In the course of the work, the students faced the problem of applying the theory learned through simulation to a real situation. In the article [11], analyzed the comparison between Cisco Packet Tracer with experimental data. The results of the study showed that network design and problem solving skills are significantly improved when students use Packet Tracer [12]. This article argues that the visual network design and modeling platform, presented as part of active learning rather than just open distance learning, helps higher education institutions facing dilemmas about how to teach growing students a fundamental understanding of theoretical network concepts [13]. Based on analysis and knowledge, the researchers found that the networks fully meet all the require ments for easy deployment and use [14]. In [15], it is stated that a software modeling tool is available to students.The article [16] investigated that the packet tracer is sometimes used as part of a replacement for using genuine hardware. This is because it uses insignificant hardware assets, continues to work at various stages, and is extremely complex [17]. Cisco Packet Tracer has a lot of preferences compared to using physical hardware. Researchers in the paper [18] investigated that it is easier to implement and use. Herbert & Wigley [19], found that unlike conventional, a rest mode that greatly helps students externally observe the development of packets across the network. Packet Tracer additionally provides tools that allow grades, which can also be used as a tracer package for group tasks [20]. In the article, we built and supported the compared practical cost of classes of Tracer packages. In thÐµ is article, the research was conducted in the form of interviews in order to identify the difficulties that teachers face in improving the ability of their students to apply the theories learned through modeling to real-world conditions. The article develops a program designed for high school students and is based on the LOGO programming language.

The study of networks is one of the important issues in the training of future computer science teachers before studying this problem. This research was implemented in the framework of training in the discipline "computer networks" in preparing future computer science teachers for training. Students of the specialty "computer science"took part in the study. The study was conducted under laboratory conditions. Most of the lessons were based on following specific instructions during classes, special ones that require installation. During the lessons, students first studied this activity, received the task and worked on the tasks, and received it. During the implementation of this study, the following types of research activities were studied detection of the functionality of network elements.

In the course of the work, students had to identify certain features of the prepared functional network. The star-shaped object can be defined to observe packets inside, and can also be additionally set for example: the collision associated with the creation of the desired frame.

Figure 2:Replacing hubs with switches shows the replacement of hubs with switches. In order to get started students had to open a window PC0 -> Desktop -> Command prompt and run the command ping 192.168.10.11. Complete the test and switch to simulation mode. After Show All / None choose Edit Filters -> ICMP and start the simulation using the button Auto Capture / Play. 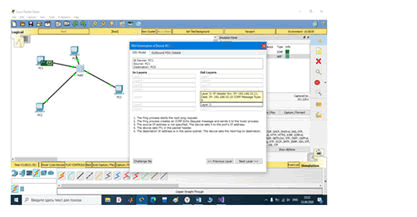 Figure 3:Packet drop due to the fact that you have not set the default gateway. 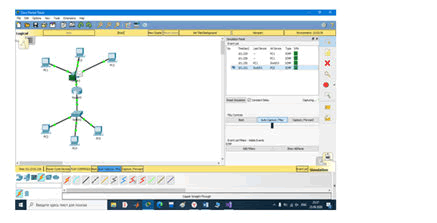 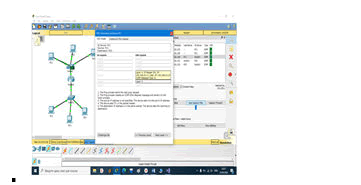 Necessary elements for project implementation; PC 0 - PC5, routers, switches. Performing ICMP simulation. A Virtual Local Area Network (VLAN) is a switched network segment that is logically allocated according to the functions performed, workgroups, or applications, regardless of the physical location of the users. Virtual LANs have all the properties of physical LANs, but workstations can be grouped even if they are not physically located in the same segment, because any port on the switch can be configured to belong to a specific VLAN. In this case, unicast, multicast, and broadcast traffic will only be transmitted between workstations belonging to the same VLAN. Each VLAN is considered as a logical network, i.e. packets for this VLAN will be switched by the switch only within this VLAN. In order for traffic from one VLAN to get to another, OSI layer 3 network devices, namely routers, are used.

Figure 6:Example of the organization of virtual networks.

The construction of VLAN networks can be carried out in various ways. Basically, three types of VLANs are used:

We also want to show practical implementation: VLAN's Use Packet Tracer to create the network shown in Figure 6. 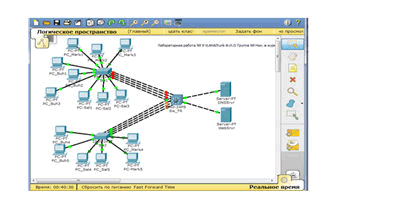 When executing, you must do the following: Figure 8:Assigning IP addresses to additional computers on the network.

Setting up a VLAN with a single switch requires a little effort: it is enough to configure each port so that it specifies the number of the VLAN to which it belongs. When VLANs are used in networks with multiple interconnected switches, a magisterial VLAN connection is used on the communication channels between them. A VLAN trunk connection involves switches using the VLAN tag assignment process, where the transmitting switch adds another header to the frame before it is transmitted over the trunk. This additional header includes a VLAN ID field that allows the transmitting switch to associate a frame with a specific VLAN, and the receiving switch to know which VLAN the frame belongs to. For each trunk channel, the 802.1 Q standard also defines one special VLAN identifier, which denotes its own VLAN (this is standard VLAN 1). When creating a territorial local area network that contains many VLANs, you need to ensure that all devices can transmit data to all other devices.

In this study, a Cisco software model was proposed as part of the subject training of future computer science teachers. Using the ICMP protocol, we successfully transmitted the information and were able to show it in simulation mode. The process of changing OSI levels when transmitting information was also shown. An example for students is an activity in which the network consists of running examples. In the course of the experimental work, I had to go through some specific difficulties that manifested themselves in the development of the student.