The problem posed by improper management of municipal solid wastes (MSW) is becoming alarming. The socio-economic and health impact assessment (SHIA) of MSW was carried out using questionnaires and interviews. Emerging results shows that out of 400 questionnaires were dispatched of which only 95.75% (379) were returned. Out of the respondents 42.22% (160) were female, while 57.78% (219) were male, with predominant age bracket in the ranged of 22-45 years. Marital status showed that 41.10% (163) are married, 48.11% are single, while 10.83% (43) are either divorced or separated. Survey of educational status of the respondents indicated 4.99% (17) had no formal education, 7.65% (29) had First School Leaving Certificates, 25.60% (97) had Diploma and NCE, and 19.52% (74) were University Graduates, while 30.61% (116) and 12.14% (46) were postgraduate and Advanced Degrees holders respectively. As at the time of this study US$1=N375, Notwithstanding, 58% of the all respondents are either employed or self-employed. In terms of income earning, 23.93% earn less than N20,000, 29.00% earn between N20,000–N29,999; 21.00% earn between N30,000–N49.999, 15.37% earn between N50,000–N99.999, while 10.83% earn above N100,000. Based on interviews from waste scavenger the most economical viable wastes are scrap metals and plastic/rubber. Unfortunately, there was no reported case of waste segregation, while only 32.75% bag their waste and have proper temporary waste containers, 9.82% throw their waste away, 4.53% bury their waste, 18.40% burn their waste, 34.51% use waste vendors. Predominant vectors associated with the waste are Cockroaches, rats and flies. Based on our finding we therefore urge Government to enact laws that will deter precarious management of waste, encourage waste recycling and segregation as well as provide waste treatment facilities in order to mitigate the adverse impacts posed by MSW streams.

According to the United Nations Environmental Programme (UNEP), wastes are seen as materials regarded of no further application or benefit for consumption, production and transformation [1]. Notwithstanding, solid wastes are also referred to as needless or ready to be discarded substances, which can be solid or semi-solid, cannot be retained for further use, as well as having no economic value or further resourceful application or value to the user. Based on origination, waste streams referred to as MSWs includes but not limited to Household Solid Waste (HSW), Commercial waste, Industrial waste, electronic waste, construction waste, Agricultural waste, Mining waste, Medical waste etc.[2].

According to the United State Environmental Protection Agency (USEPA) [3], components or characters of MSWs basically includes but unlimited to; plastic, metals, paper, vegetable matter, textiles, rubber, and glass. Estimates of the World Health Organisation indicated an annual solid waste generation of whose mass is about 1.375 billion tons, with an expected 20 % increase whose mass is likely to surge to about 2.2 billion tonnes by the year 2025, with logistic cost of about $375.5 billion [4].

As reported by Adejobi et al. [5] it is established that in Nigeria, there is a steady rise in rural-urban immigration as a result of desire of the rural populace to meet up or comprehend contemporary technological advancement. Unfortunately, this population rise and its associated activities have resulted in large volume of waste streams that have been poorly handled, due to inefficient, insufficient and inappropriate sanitary facilities. Consequently, waste streams are handled poorly resulting to environmental pollution. As reported by Adamu et al. [6] the illicit disposal of MSWs has had its adverse effects on the ecosystem, in addition of posing environmental, socioeconomic and health impacts depending on the management strategy [7,8]. For instance, air pollution incur a global expenses of $5 trillion resulting from losses associated with productivity and reduced quality of some basic resources [9]. As established in literature, there is a very strong correlation between waste and public health [10]. Hence the SHIA is hereby investigated.

The method of data acquisition was through interviews and administration of questionnaires. A total of 400 questionnaires/ interviews were administered or granted to respondents within the metropolis in order to acquire envisaged socio-economic and health impact data of MSWs. The questionnaires were collated based on socioeconomic and health variables such as; Educational status, Income earning, waste management method, potential health risk vectors associated with the dumpsites. 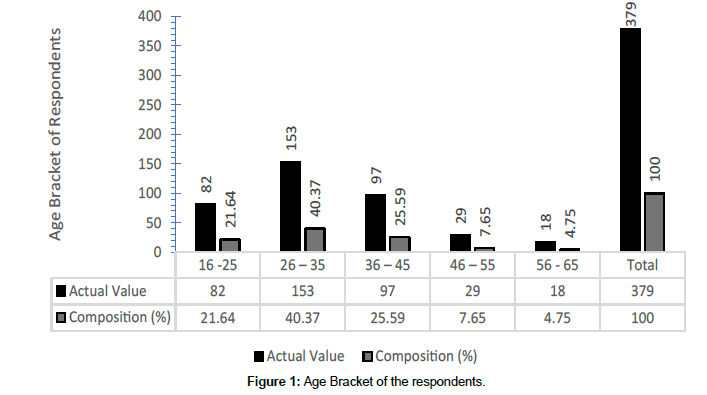 Figure 1: Age Bracket of the respondents. 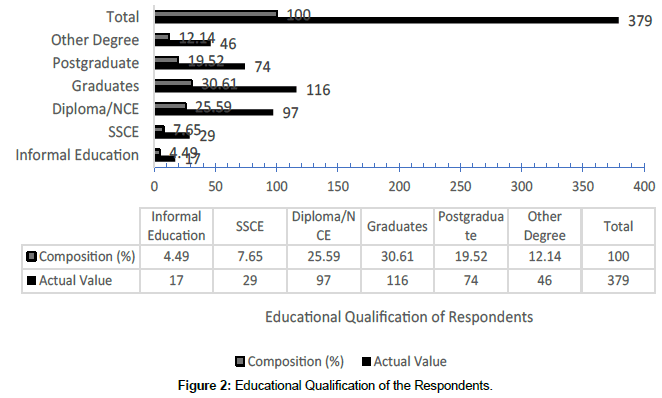 Figure 2: Educational Qualification of the Respondents. 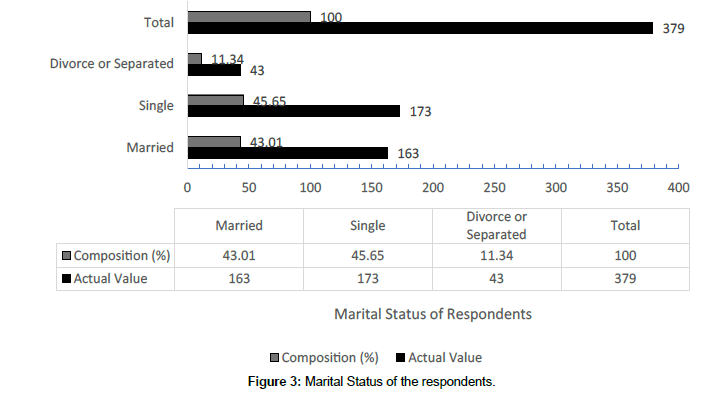 Figure 3: Marital Status of the respondents.

Figure 4: Income earnings of the respondents.

Furthermore, higher income earners within the range of N50,000–N99,999 were 15.30% (58) as presented in Figure 4. The lowest amongst the respondents who have the income earning above N100,000 represents 10.82% (41). For instance, a study by Ogunrinola et al. [10] on the comparison exposure levels of dumpsite pollutants between self-employed and wage income earners in Lagos state showed that, the self-employed earn less (N27,000), and are more exposed compared to wage income earners (N31,000) who work outside their abode and less exposed. 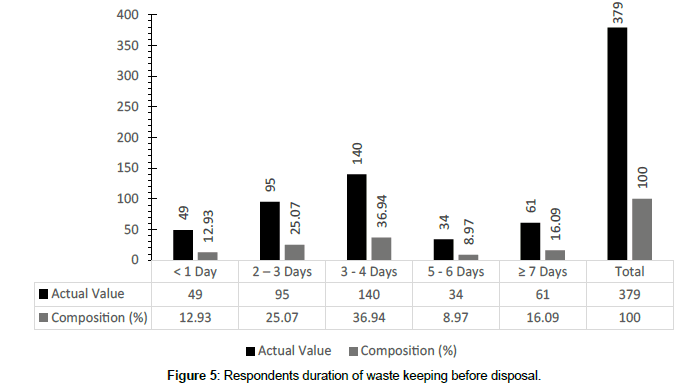 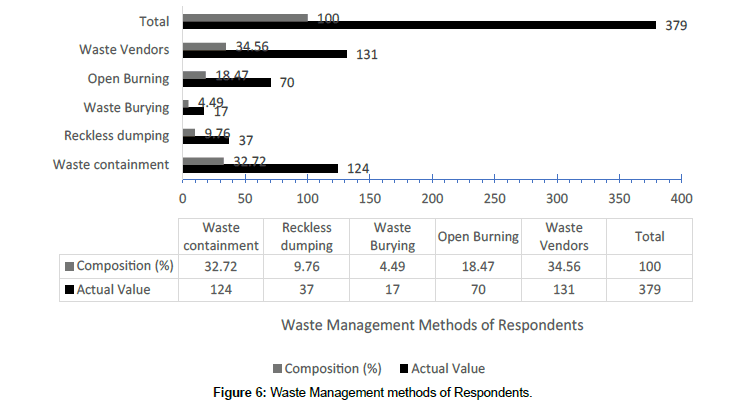 A study, while only 34% of waste streams are packaged for disposal, 61.20% prefers to burn their waste in open air and another 2.9% prefers burying their waste, also showed that about 42.7% of waste are usually retained from dumpsites by waste scavengers [11]. Another study conducted on the assessment of MSWs in Ilorin west Local Government Area of Kwara state indicated different methods of waste disposal including; communal dumping, regulated dumping and other forms of illicit dumping in canals, drainages and in the street. The study by Oyekan and Sulyman [12] also showed that; in Ajikobi district, 56% dump their waste in the street, while 41% burn their waste in Magaji district, and another 33% in Alamu district use regulated dumpsite provided by Government. 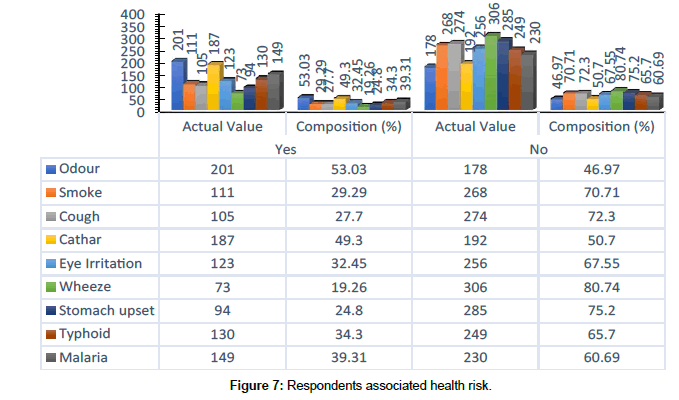 Cases of stomach upset were reported amongst 24.80% (94) of respondents, compared to a higher number of respondents that indicated no incidence of stomach upset representing 75.20% (285). Meanwhile, respondents indicating cases of typhoid fever had value of 34.30% (130), as opposed to higher number of respondents that indicated no case of typhoid fever, with values of 65.70% (249). The incidence of malaria associated with MSWs was indicated amongst 39.31% (147) of male respondents. On the other hand, respondents with no cases of malaria were higher with value of 60.69% (230). Inhabitants close to dumpsites have become more liable to diseases, 49.5% incidence of malaria was reported amongst the respondents closer to dumpsites, as opposed to 22% and 28% cases that are further and farther respectively [10]. It was also established that higher income earner are less prone to ailment associated with pollution.

This research investigated the Socioeconomic and Health Impact Assessment (SHIA) of Municipal Solid Waste of Yenagoa Metropolis of Bayelsa State in Nigeria. Results of the SHIA survey showed that the populace need to be further sensitized on waste segregation, reduction, reuse and recycling. In addition, the aspect of legislation needs to be enforced in order to deter earing populace from anthropogenic activities on one hand; on the other hand, Government needs to urgently formulate policies that will aid waste recycling, reduction and reuse. This will create employment for the populace and further reduce the anthropogenicity associated with municipal solid waste.