An absorbed Glass Mat (AGM) battery is a type of valve-regulated lead-acid (VRLA) battery, which is designed for low-maintenance rechargeable batteries. Absorbent glass mat batteries are same as that of lead-acid battery but the electrolyte is held in glass mat separators, as opposed to freely flooding the plates. This design brings significant advantages to AGM batteries such as purer lead, water conservation, fluid retention, high power density, lower internal resistance that allow the batteries being charged or discharged more quickly. As a result, the voltage performance of AGM during charging and discharging is slightly different from conventional lead-acid batteries. Factors like temperature, sulfation and ageing affects the battery life.The purpose of this work is to study the factors affecting the battery State of Charge (SOC) and find a solution to determine the accurate value of the state of charge of the lead acid battery for electric vehicle (two-wheeler) using unscented kalman filter.

The lead storage battery is the most conventional and the most widely applied storage battery in the world today. Applications for these vary from small sealed batteries of a few Watt-hours capacity in consumer applications to large batteries of many megawatt-hours capacity in submarines, utilities, and other applications. The reaction products at the electrodes on charge and discharge of a lead-acid storage battery are given in the “double sulfate theory”. The enthalpy, Gibbs free energy and its temperature coefficients for this chemical reaction have been the subject of many discussions. Because the concentration of sulfuric acid is appreciably changed by the conversion, numerous investigations of its thermodynamics have been carried out. Since 1954 these studies have been extended by two important findings: The discovery of two forms of PbO2, α- PbO2, β- PbO2, in the active materials leads to alterations in the value of the thermodynamic quantities. The free energies of the two modifications of PbO2 differ slightly, whereas the entropies are quite different. The electrochemistry of the materials existing between defined phase limits (e.g., lead dioxide) can be explained [1]. The breadth of the phase influences the potential.

A lead acid battery uses a combination of lead plates or grids and an electrolyte consisting of a diluted sulfuric acid to convert electrical energy into potential chemical energy and back again. Each cell of a lead acid battery contains (in the charged state) electrodes of lead metal (Pb) and lead (IV) oxide (PbO2) in an electrolyte of about 37% w/w (5.99 Molar) sulfuric acid (strongSO4). In the discharged stateboth electrodes turn into lead (II) sulfate (PbSO4) and the electrolyte loses its dissolved sulfuric acid and becomes primarily water. Due to the freezing-point depression of water, as the battery discharges and the concentration of sulfuric acid decreases, the electrolyte is more likely to freeze. Because of the open cells with liquid electrolyte in most lead-acid batteries, overcharging with excessive charging voltages will generate oxygen and hydrogen gas by electrolysis of water, forming an explosive mix. This should be avoided. Caution must also be observed because of the extremely corrosive nature of sulfuric acid proposed by Wenxinpeng [2].

Lead acid batteries have lead plates for the two electrodes. Separators are used between the positive and negative plates of a lead acid battery to prevent short-circuit through physical contact, mostly through dendrites (treeing), but also through shedding of the active material. Separators obstruct the flow of ions between them and increase the internal resistance of the cell as proposed by Wenxinpeng [3]. The Extended Kalman Filter has been widely accepted as a standard tool in the machine learning community. In this paper we have presented an alternative to the EKF using the Unscented Filter (UKF).The UKF consistently achieves a better level ofaccuracy than the EKF at a comparable level of complexity. This has been demonstrated in a number of application domains, including state-estimation, dual estimation and parameter estimation [4].

In this paper, it is clearly explained how the unscented kalman filter providesbetter results than the Extended Kalman Filter (EKF) [4]. The electric lead-acid batteries are devices that provide the electric energy from chemical one. These are electrochemical generators. They store the energy that they restore according to the needs. They can be recharged when one reverses the chemical reaction; it is what differentiates them from the electric batteries [5]. In Thevenin battery model all the elements are assumed to be constant. Therefore this model is limited due to its dynamic accuracy as this model does not take account into the state of charge. This model can be used which do not consider the dynamic state of charge. Hence, it is not suitable for this project [6]. Voltage of lead-acid battery per cell produces 2 V. So battery 12 V consists of six cells, so that the next series. Voltage at the terminal will vary according to the conditions of work. And the concentration of the acid will be changed during the charge and discharge [7].

Battery performance and service life will be directly dependent on the quality and output characteristics of the charger selected. Currently, there are several battery charging control methods developed. Those methods are constant current with one-current rate and multiple decreasing current rate, constant voltage, two-step, three-step and pulse charging [8]. In the relationship between the discharge voltage and the SOC was determined for a wide range of discharge rates at different ambient temperatures for telecommunication backup power supply applications. However, since this relationship is not applicable to random discharge currents, this method has a large SOC error (up to 10%).

The block diagram proposed is shown in Figure 1.The proposed block diagram consists of lead acid battery in which the battery voltage, current are the input parameters given to the unscented kalman filter in addition with the process and measurement noise and then the battery state of chargeis estimated. This is then compared with the real SOC.

The battery is considered as a source voltage that varies with their state of charge. This varies according to the current of the battery. If it is positive (battery discharge) then the state will decrease and discharge; if negative (battery charging) then the charge will increase [5].

Figure 2: Equivalent circuit of a battery.

And the RC output model can be expressed as

The extended Kalman Filter (EKF) is the most widely applied state estimation algorithm for nonlinear systems. However, the EKF can be difficult to tune and often gives unreliable estimates if the system nonlinearities are severe. This is because the EKF relies on linearization to propagate the mean and covariance of the state.. The use of the UKF can provide significant improvement over the EKF.

The UKF addresses the approximation issues of the EKF. The state distribution is again represented by a Gaussian Random Variable (GRV) but is now specified using a minimal set of carefully chosen sample points. These sample points completely capture the true mean and covariance of the GRV. When a Gaussian is passed through a non-linear function, it does not remain a Gaussian anymore but we approximate the Gaussian from the resulting figure, so in UKF a process called unscented transform helps to perform this task. To summarize here are the steps the unscented transform performs:

Noise is said to be the disturbance that affects the performance of the lead acid battery. There are two types of noises namely process noise and measurement noise. Measurement noise is that sensor noise from sensors like voltage sensor, current sensor and temperature sensor. The methodology followed to estimate the SoC is shown in Figure 3. 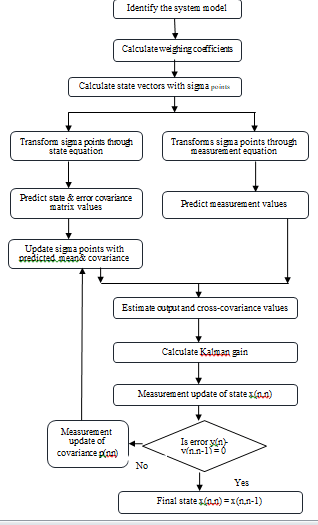 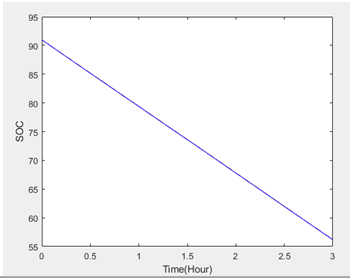 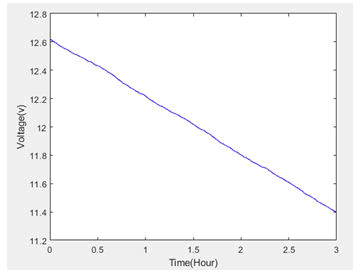 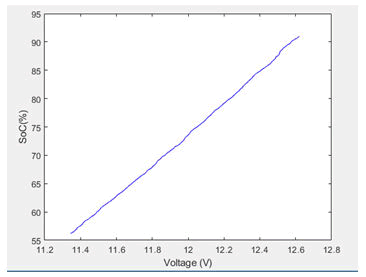