Silver-activated zinc sulfide (ZnS:Ag) powder was successfully synthesized by a physical thermal diffusion method in flux of NaCl to produce this film scintillators for alpha particle detection. The synthesized and commercial ZnS:Ag powders were coated uniformly on Plexiglas disc substrates by a spin coating method. Alpha counting efficiency of the films produced from the synthesized and commercial powders are respectively ~56% and ~67% while they are ~65.6% and ~80% relative to that of the commercial Eljen440 scintillator film. Alpha counting efficiency of the synthesized scintillator film is ~82.8% of the commercial powder film which has itself ~80% efficiency relative to that of the Eljen440 scintillator film. The physical thermal diffusion method applied is rather simple and efficient in particular, if a higher purity material is used which can be simply applied in any developing laboratory.

Scintillators are solid, liquid or gaseous materials used for detection of different types of ionizing radiation. Zinc sulfide doped with silver (ZnS:Ag) is one of the oldest inorganic scintillators usually used for alpha counting [1]. This type of scintillator also is used as thin screens and has played a key role in the early Rutherford experiments [1,2]. This scintillator is available in polycrystalline powder forms primarily used as thin films mounted on photomultiplier tubes for alpha particle or other heavy ion detection [3,4], in Lucas cells for radon detection [5-7], or to a lesser extent in thermal neutron detection when enriched with Li6 [8,9]. If its thickness is approximately >25 mg.cm-2, the scintillator is not usable due to the opacity of the multicrystalline layer to its own luminescence [8].

Various chemical methods are applied to produce ZnS:Ag powder such as hydrothermal [10], co-precipitation [11-15] and sol-gel methods [16]. The solubility constant of Ag2S (6 × 10-50) is far less than that of ZnS (1.1 × 10-21) when used for production, thus it is difficult for Ag+ and Zn2+ ions to co-precipitate with S2- [10-12], leading to a low photoluminescence efficiency of ZnS:Ag powder relative to pure zinc sulfide powder [12]. These three chemical methods usually suffer from problems such as poor crystallization requiring in some cases annealing at a high temperature, high cost of equipment, and particle agglomeration, which significantly hinders their potential applications [17]. To avoid such problems, the physical thermal diffusion method was applied provided superior characteristics in terms of control of impurity diffusion on the host lattice by tuning time and temperature, good crystallization and low cost procedure [18-22].

The physical thermal diffusion method applied in this study is basically a mixture of the main phosphor (ZnS) with a dopant compound (AgCl) which was physically mixed to increase an effective surface diffusion and heating the mixture according to a planned protocol. The heating often is slightly below the melting point of the host material [21,22]. This thermal diffusion method has a onestage procedure and produces satisfactory ZnS:Ag powder with an acceptable efficiency, although its production is not free of challenges [18-22].

Commercial ZnS: Ag powders are usually limited in availability specially in developing laboratories, have a high cost and some with a low quality and low efficiency. Therefore, due to the high academic interest, need to developing a simple method for laboratories in particular in a university environment, and in particular to fulfill a high need of our Health Physics and Dosimetry Research Laboratory to such phosphors, this research and development study was performed. Accordingly, it is the purpose of this study to:

• Synthesize ZnS: Ag powder by developing a thermal diffusion method by doping silver in ZnS crystal lattice in a flux of NaCl,

• Produce thin film ZnS:Ag scintillators from the synthesized powder and also from a commercial powder by a spin coating method,

• Optimize the thickness of thin scintillator films produced by an alpha counting method,

• Determine the alpha counting efficiency of the scintillator film produced compared with those of two types of commercial films, and

• Discuss with an educational view the methodology developed so that it can easily be produced in any developing laboratory.

Synthesis of ZnS:Ag scintillator powder in flux of NaCl

In order to synthesize ZnS:Ag powder, several steps were followed:

2. The powder was thoroughly mixed, grinded, poured into a quartz crucible and then covered with a quartz cap to be placed in a furnace.

3. Another quartz crucible containing an optimum amount of sulfur (determine with try and error until synthesize done in sulfide atmosphere, as an alter way we can done synthesize under purging H2S gas) was placed in the tube furnace so that the thermal regime applied later changes the sulfur into SO2; the first step for making the furnace oxygen free.

4. In order to completely make the furnace oxygen free, oxygen was removed by applying the following steps:

b. The vacuum was broken by purging continuous flow of argon gas into the furnace while the vacuum pump was turned off so that the gas pressure was allowed to reach 760 Torr pressure. Then the furnace was vacuumed again to 10-2 Torr. This process was repeated for five times.

c. Final step to make the furnace oxygen free was performed during a thermal regime.

5. Thermal regime was performed by applying the following steps [22]:

b. The sulfur (with melting point 144°C and boiling point 444°C, in large particle sizes of ~100 μm) was melt down in the heating mixture in the crucible. As a result, the melted sulfur spreads into the pores and gaps of the primary mixture powder and is uniformly distributed throughout the mixture.

c. The furnace temperature was further increased from 400°C to 600°C with a rate of 3.3°C. min−1 and was maintained for 30 min; the excess sulfur that has not been chemically reacted evaporates in the pores. The evaporated sulfur reacts with O2 in the pores to form SO2 which is harmless to the production of ZnS phosphor particles. Therefore, the oxygen in the blended mixture is converted into SO2 gas in the heating mixture before the start of the growth of ZnS particle crystals (as mentioned in papa 4c above).

e. Heat treatment was applied in an argon gas environment at atmospheric pressure after which the furnace was cooled down in the argon gas atmosphere. Then the powder was taken out, washed with distilled water to eliminate excess salt and the final powder was dried at 70l°C. In these experiments, the glassware used was always washed by a solution of hydrochloric acid and nitric acid with a 3:1 ratio.

For the thin film production, several steps were followed:

2. ZnS:Ag powder (3.5 g) was then added slowly to the dough. The final dough was stirred to produce uniform dough for coating on the 2 mm thick Plexiglas substrate.

4. In order to produce scintillator films with a specific thickness, a suitable amount of dough was spread on a 4 cm diameter area of the substrate. The final scintillator films produced had density thicknesses from 3.5 to 25 mg.cm-2. The density and thicknesses for each sample was calculated as the ratio of the weight of the samples (by subtracting the weight of the substrate) to its area.

A photomultiplier tube (PMT XP2020) with 5.08 cm diameter coupled to a counting system was used in this study for alpha counting with a scintillator film, as shown in Figure 1. Alpha counting efficiency of the produced ZnS:Ag scintillator films of different thicknesses and the commercial Eljen440 films were determined using an 241Am source with an activity of 3.3 kBq with a 2 cm2 active area, by the ratio of recorded counts to source fluence in the same time intervals and considering solid angle and subtracting background counts. 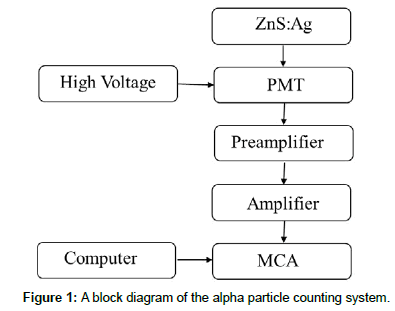 Figure 1: A block diagram of the alpha particle counting system.

The scintillator powder produced under a UV light exposure showed a light glow color which indicates successful doping of the silver in the crystal lattice. Figure 2 shows the fluorescent glow of the synthesized powder under 366 nm UV light excitation wavelength. As observed in Figure 2, the color glow seems to be an indication that the activator has been doped in the ZnS crystal lattice. 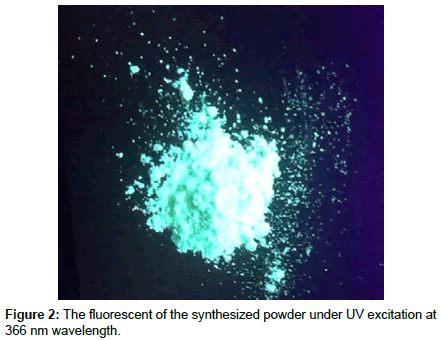 Figure 2: The fluorescent of the synthesized powder under UV excitation at 366 nm wavelength.

Figure 3 shows X-ray diffraction spectra (XRD) of the activator doped ZnS powder which is synthesized in this study. This analysis show that the particles are in cubic and hexagonal structure of ZnS. Also, in this figure shift peaks are observed which are related to the diffusion of the Ag atoms in the host lattice crystal. Figure 4 shows the electron diffraction spectroscopy (EDS) of the activator doped synthesized ZnS powder. This analysis shows that the NaCl particles are diffused in structure of ZnS, without appearing any peak of oxygen or ZnO in the structure of produced powder. It seems that the sintered material has been identified as NaCl under the assumption that the melted NaCl has the flux action for diffusing Ag in the ZnS structure and the growth of ZnS:Ag particles. Then one must also consider the removal of NaCl [22]. But a little amount of NaCl diffusion in the host lattice crystal even after several times dried the synthesized powder. 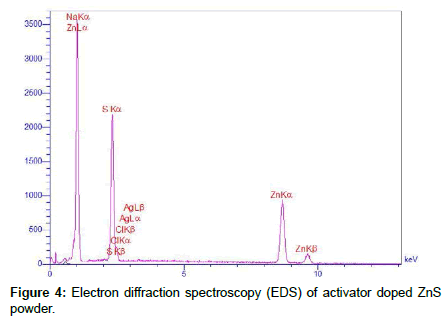 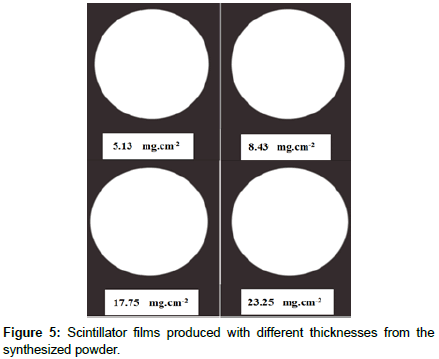 Figure 6 shows alpha particle detection efficiency as a function of the ZnS:Ag scintillator film density thickness produced from the powder synthesized in this study and the commercial powder. In both types of film produced, the efficiency has approximately the same trend for ZnS:Ag film density thicknesses from 9 to 20 mg.cm-2. At a density thickness of about 17.75 mg.cm-2, higher efficiencies for both of the ZnS:Ag scintillator films were obtained which was used as an optimized value in our studies which is in good agreement with that of another study [24]. 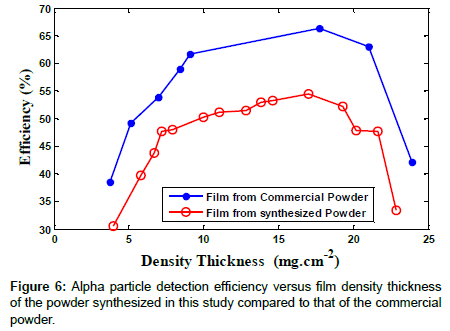 Figure 6: Alpha particle detection efficiency versus film density thickness of the powder synthesized in this study compared to that of the commercial powder.

By obtaining the ratio of the efficiency of the synthesized to commercial powders, the relative efficiency of the two produced films was obtained. Figure 7 shows the ratio of the two efficiency curves as function of the film density thickness of the two types of film used. As it can be seen, the ratios of the two efficiencies are rather relatively flat up to the density thickness where the efficiencies are maximum. Therefore, it can be stated that the produced powder has the same counting characteristics of the commercial powder but it requires further improvement in terms of production and material consideration. 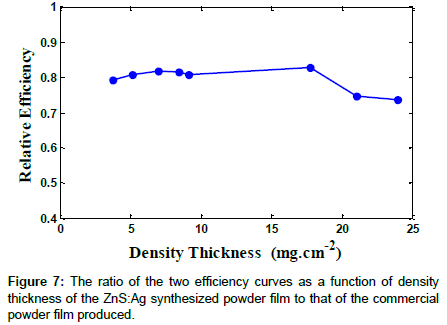 Figure 7: The ratio of the two efficiency curves as a function of density thickness of the ZnS:Ag synthesized powder film to that of the commercial powder film produced. 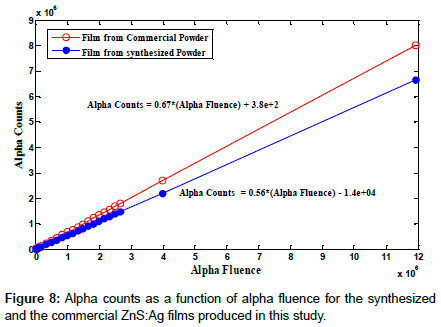 Figure 8: Alpha counts as a function of alpha fluence for the synthesized and the commercial ZnS:Ag films produced in this study.

Figure 9 shows the alpha counting efficiency as a function of alpha fluence for the films produced from the powder synthesized in this study and the commercial ZnS:Ag films. As can be seen, the efficiencies are constant over a broad range of fluences up to 1.2 × 107 alpha particles.cm-2 with efficiencies of 55.7% and 67.25% for the two types of films which are actually the slopes of the responses in (Figure 9). 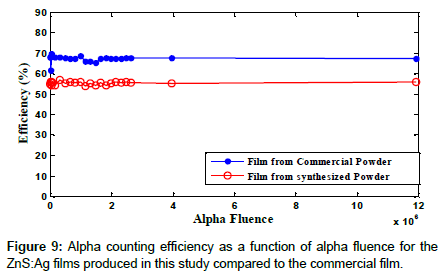 Figure 9: Alpha counting efficiency as a function of alpha fluence for the ZnS:Ag films produced in this study compared to the commercial film.

The minimum detectable activity (MDA) of the two types of scintillator films produced from the synthesized and commercial powders were obtained by applying the minimum detection limit (MDA) relationship given by Altshuler and Pasternack [25,26]. The MDA for different counting times were calculated for a confidence level of 99.99%. Figure 10 shows the MDA as a function of counting time for the two types of film produced from the synthesized and commercial powders. The results obtained are in good agreement with the MDA methods studied by others [26,27]. 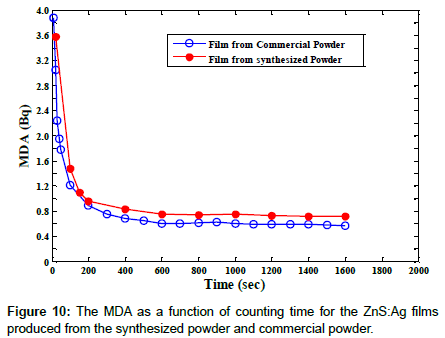 Figure 10: The MDA as a function of counting time for the ZnS:Ag films produced from the synthesized powder and commercial powder.

The research was supported by the Amirkabir University of Technology under the current budget.