Due to the close correlation between environmental radiation
protection and human health protection, the normal radiological
activity of 226Ra, 232Th, and 40K were measured in samples of beef and milk as an animal products. The measurements were performed using a gamma spectrometer to measure those animal products collected from four different regions, namely Mahammid, Cap, Helal and Nesrab in Upper Egypt. The uptake of these radionuclides was estimated from animal food, clover, straw, and water. Results showed that the concentration of 226Ra, 232Th was lower than the permissible values. The total annual dose of natural radionuclides was estimated as a result of the consumption of the population in those areas contaminated with phosphates for animal products. The total effective annual dose of beef consumption was estimated are 1.868, 1.889, 1.644, 1.756 µSv/yr in the studied areas respectively. Since the concentration of radionuclides 226Ra, 232Th, 40K in milk is higher than in beef, the total annual effective dose of milk consumption was higher than beef consumption. The effective annual dose was less than the annual permissible dose for the public. The obtained results indicating that a safe consumption of an animal products in the area under investigation.

Human activities, the most important of which are the production of energy and military operations, such as nuclear activity tests or radiation leakage, are related to the presence of radionuclides in the environment. Studies have also shown the importance of studying the radiation activity of the consumable parts of animal products. Some mining industries such as phosphate, which causes the spread of phosphate dust in the environment, as well as industries related to the production of agricultural fertilizers, contribute to the generation of naturally radioactive materials in the environment surrounding these industries. Phosphate dust contains a large number of natural radionuclides from 238U, 232Th and 40K. Phosphate dust is spread over large areas through wind and rainwater and is accumulation in soil and vegetation, which has a negative impact on human health [1].

The main pathways for the entry of natural radionuclides into the body are ingestion and inhalation according to Tawalbeh et al. [2]. Each radioactive radionuclide has a target, which is concentrated in the human body, which affects negatively the human share, such as the weakness of the immune system and the emergence of many diseases and the consequent increase in mortality [2]. Uranium toxicity primarily mainly affects kidneys [3]. 232Th causes its negative effect on the lungs, liver and structural tissues and 40K in muscle tissue. The accumulation of large quantities of these radionuclides will affect the overall health of the human being and raise the rate of cancerous tumors causing death [2].

Since Phosphate, mining causes a rise in the proportion of radionuclides in various agricultural activities around phosphate mining areas. Measuring the total dose in beef and milk is necessary to determine the effective dose that a person is exposed to as a result of his consumption because the persistence of radionuclides in the body is a function of its half-radiological and biological life. The risk to human health is linked to the long life of half of many radionuclides and carcinogens. The concentrations of 226Ra, 228Th and 40K radionuclides were measured in animal foods. The uptake of these radionuclides was estimated in animal products.

Samples preparation and description of the measuring system are discussed below.

A study was performed in four regions: Mahammid, Cap, Helal, and Nesrab surroundings phosphate polluted area in Upper Egypt. Composite four samples of clover, straw, and water as food of animals. Then four samples of beef and milk were collected from the mentioned regions. Milk samples were measured as the basis for the production of many products. It is valuable for human health. The samples were kept for 30 days in order to establish the secular equilibrium between 238U, and 234Th. Figure 1 shows the map of the four regions indication the study location. Figure 1: Map of the four regions showing the study location.

The measurements of radionuclides were performed to the samples under investigation using the gamma-ray spectrometer with an inorganic detector, NaI(TI). In this study, the low-level background gamma-ray spectrometer consists basically of 3” × 3”serface area NaI(TI) detector, with accessories and a multichannel analyzer (MCA). A detector used in the measurements has suitable specifications such as efficiency, 1.2 × 10-5 at 1332 keV and resolution, 7.5% at 662 keV. The detector was fixed inside lead shield 5 cm thickness with a fixed bottom and a movable cover shielded to reduce the background radiation. The background count was determined and subtracted from the gross count to correct the net count of gamma rays of measured isotopes. The measuring time was carried out for about 10 h to obtain the reasonable measured spectrum with lowest error.

The NORM measurement is usually estimated from the content of 226Ra, 232Th and 40K. As 98.5% of the radiological effects of the U series are produced by Ra and its daughter products, the contribution from the 238 U has been replaced with the decay product 226Ra. Since sand beach minerals, rejected light sands and sea beach soils can be used in industries and building constructions, the gamma-ray radiation hazards due to the specified radionuclides were assessed by three different indices. The Radium equivalent (Raeq), is an index that has been used to calculate the specific activities of 226Ra, 232Th, and 40K, which used into estimate the radiation hazards related to them. The calculation of radium equivalent activity can be calculated by equation (1), [4].

Where: ARa, ATh and AK the specific activities of Ra, Th and k in Bq.Kg-1, respectively, Raeq is related to the external and internal doses due to radon and its daughters. The external hazard index is obtained from Raeq expression through the supposition that its maximum value allowed corresponds to the upper limit of Raeq (370 Bq.Kg-1). The hazard indices can be calculated from equations (2) and (3), [4].

Where: ARa, ATh and AK are the specific activities of Ra, Th and k in Bq.Kg-1 respectively.

Activity measurement, the annual effective dose from the animal products are calculated and discussed.

In the present work, secular equilibrium is assumed, the 238U and the 232Th activities were determined by their daughters activities. A chosen radioactive daughters were 214Bi (609.3, 1120.3 and 1764 keV) and 214Pb (351 keV) for 238U, 208Tl (2614 keV), 212Pb (238 keV) and 228Ac (911 keV) for 232Th, (Hamby and Tynybekov, 2002; Tzortzis and Tsertos, 2003). 40K is very evident in background spectra. It is present as 0.17% of natural potassium and is present in wood and building materials and even in the bodies of the gamma spectrometer. The substantial presence of 40K in the detector background and in many samples, with its long Compton continuum, severely restricts the limit of detection of the many nuclides emitting gamma rays at lower energies. The gamma spectrometry of 40K is straight forward from its 1460 (10.7%) keV γ-line but peaked-background correction is always necessary. There is a spectral interference from the 1459.91 keV peak of 228Ac, which must be taken into account even when the activity of the 232Th daughters is low and the peak shape is not noticeably affected [5].

The activity concentrations for the natural radionuclides in the measured samples were calculated using equation (4), [6,7].

Where: Np: Is the net counting rate background gamma-ray correction,

ε: The detector efficiency of the specific γ-ray

M: The mass of the investigated sample (kg)

The measuring time for gamma-ray spectra ranged from 10 to 15 h depending upon the activity levels present in the samples, [8].

Radionuclides absorbed in the gastrointestinal tract are transported by blood and distributed into the various organs. The distribution varies according to the physiological status of the animal as well as nature and chemical form of the pollutant. The concentration radioactive of natural radionuclides in the animal products was evaluated by the equation (4) (Table 1) [9,10]:

Cp: Is predicted concentration in animal products, Bq/Kg at time of consumption.

Cf: Is the average radionuclides concentration of in animal foods.

Qf: Is the amount of animal food consumed kg/d

Fp: Is the average of the animal’s daily intake of radionuclide that appears in Kg of animal product [11].

Values of Fp used in the calculation are shown in the Table 2. Figure 2 shows the average natural radionuclides concentration of in animal food. 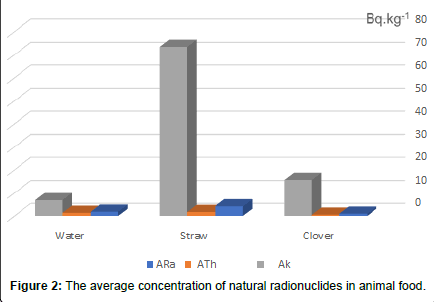 Figure 2: The average concentration of natural radionuclides in animal food.

Table 2: Average of the animal's daily intake of the radionuclide in Kg of animal product [14].

Based on concentrations of a radionuclide in animal products and annual consumption rate, the human health hazard from irradiation by the direct ingestion can be estimated. A mechanism to assess the radiological annual dose for a human body from animal products that contain a certain level of radioactivity was determined by using equation (6) [12].

Dp: An effective dose per year,

Up: Is the consumption rate of these animal products per year Kg/yr.

D: Is the dose conversion factor for ingestion of radionuclide (μSv.Bq-1).

Table 5 lists the activity concentrations of 226Ra, 232Th and 40K in animal products which are calculated based on the activity concentration of those radionuclides in animal foods [clover, straw, and water], using equation (5), and used Table 1. For four cultivated areas which surround the Al-Nasr phosphate quarry (Mahamid, Cap, Helal, and Nesrab). 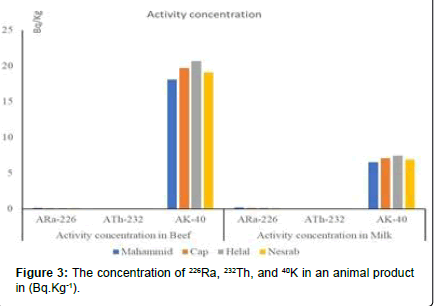 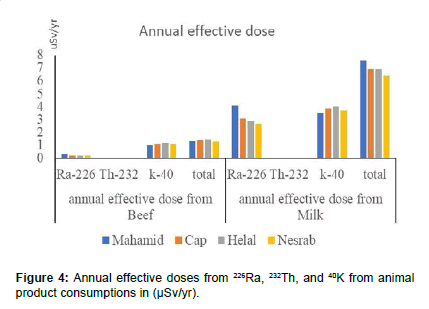 These values are below the recommended limit by the international commission on radiological protection as the maximum annual dose to the public members.

The radium equivalent activity and the hazard indices from animal product

To calculate the equivalent of an annual effective dose of each area, the external hazard index for beef and milk samples were estimated (Table 7).