Diabetes mellitus is a metabolic disorder which affects millions of people worldwide. It is characterized by hyperglycemia that results either from an absolute or relative insulin deficiency. It is associated with long-term complications [1]. Recent studies have reported that patients with diabetes have a high susceptibility for numerous liver diseases, including non-alcoholic fatty liver disease, abnormal liver enzymes, acute liver failure, cirrhosis, as well as hepatocellular carcinoma [2], cardiovascular, nephropathic and neuropathic diseases [3]. Diabetics who suffer from metabolic disorders like hypertension and hyperlipidemia are easily exposed to cardio-cerebrovascular diseases, for example, coronary heart disease which is a risk factor that often leads to death [4]. Therefore, it is critical to establish strategies to prevent and control the epidemic trend of diabetes mellitus and its complications [5].

The treatment of diabetes mellitus depends enormously on dietary measures, which may include the use of traditional plant therapies. Linum usitatissimum or flaxseed or linseed belongs to family Linaceae. Flaxseeds contain flax oil which contains unsaturated fatty acids such as oleic acid (12–30%), linoleic acid (8–29%) as well as linolenic acid (35–67%) [4]. These particular fatty acids have been found to have significant anti-inflammatory [6], and antiulcer properties [7]. Flaxseed and its oil are among the top bestselling herbal dietary supplements [8]. It also contains plant lignan secoisolariciresinol diglycoside (SDG). The SDG from L. usitatissimum known as antioxidant [9], antihyperlipidemic, antihypercholesterolemic, antihyperinsulenaemic and antihyperlipidaemic [10]. SDG and omega-3 fatty acids are well known for improving hyperlipidemia. Generally, flaxseeds are known to minimize the severity of diabetes by making blood glucose levels stable [11].

In addition to the glucoregulatory benefits of flaxseeds, studies have proved a cardioprotective role through improved arterial compliance as well as anticoagulant properties [12,13].

Streptozotocin (STZ) was purchased from Sigma-Aldrich, Milwaukee, USA. All the other chemicals used in this research were of analytical grade.

Flaxseeds with a moisture content of 6.2 wt% were purchased from the local co., Menoufia, Egypt. They were cleaned in a careful manner by hand to remove the foreign materials such as other seeds, stones, and small stalks. The cleaned flaxseeds were dried for twelve hours at 105°C in an oven, and then crushed into powder in a grinder (B-400, Buchi Labortechnik AG, Switzerland) with a size range of 0.45–1.2 mm. The powder was kept in a vacuum dryer until approaching time of use.

Thirty male albino rats (Sprague-Dawley strain) weighing 140 ± 10 g and aged between 8-10 weeks old were accessed from The Holding Company for Biological Products and Vaccines (VACSERA, KSA, Riyadh). The rats were kept in wire-bottomed cages in a room under a standard condition of illumination with a 12 – hours light-dark cycle at 25 ± 1°C. The rats were provided with tap water and a balanced diet. The experiments were approved by the state authorities and it also followed the Egyptian rules on animal protection.

The diabetic rats were developed by multiple low-dose STZ injections based on previous reports with some modifications. Rats were weighed and ear-notched. STZ was dissolved in cold 0.01 M citrate buffer, pH 4.5, which was always freshly prepared for immediate use. STZ injections were administered intraperitoneally (i.p.), and the doses were determined according to the body weights of the animals. Fifteen rats were administered CsA (20 mg/kg/day, s.c.) daily for 10 days prior to the STZ treatment and simultaneously received multiple low doses of streptozotocin (MLDSTZ) (20, 40 and 60 mg/kg/day, i.p.) for 5 consecutive days (5 rats/group. Non-fasting blood samples were collected twice per week by tail bleeding into heparinized tubes. The glucose concentrations in the plasma samples were obtained using the enzymatic colorimetric method. The rats were defined as diabetics when their non-fasting blood glucose level (BGL) reached more than 200 mg/dl in two consecutive readings [17,18].

After 8 weeks, the rats were deprived of food for 14 hours and then scarified under ether anesthesia. The abdomen was opened and blood was collected from the abdominal aorta. Blood samples were centrifuged at 3000 rpm for 7 min and the clear serum was stored at −20°C until analysis. Liver, heart, and kidney were removed and blotted. Heart, liver, and kidney were exposed and perfused with cold phosphate buffer saline of pH 7.4. Blood free tissues were homogenized and subjected to following estimations. Total glutathione (GSH) was evaluated by the method of Sedlak and Lindsay [19]. Superoxide dismutase (SOD) was measured by using the method of Ellmann (1958) Catalase (CAT) activity was evaluated using the method of Claiborne [20].

Serum glucose level was measured according to the method of Young [21] by using glucose kits (Spinreact, Spain).

All the data are presented as mean ± SD and analyzed by One-way ANOVA followed by Dunnett test for the possible significance identification between the numerous groups. p<0.05 was considered statistically significant. Statistical analysis was done using the Statistical Package for the Social Sciences (SPSS for WINDOWS, version 16.0; SPSS Inc, Chicago). 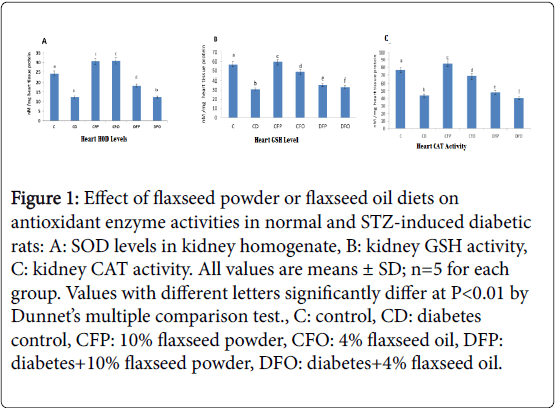 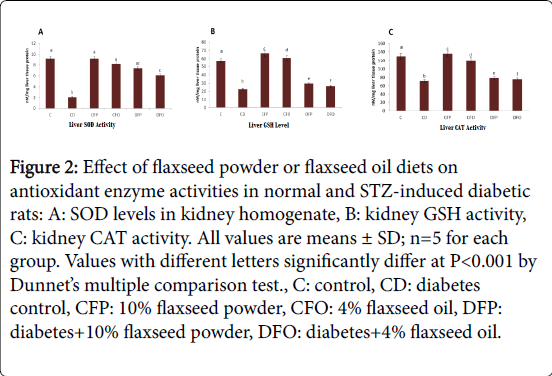 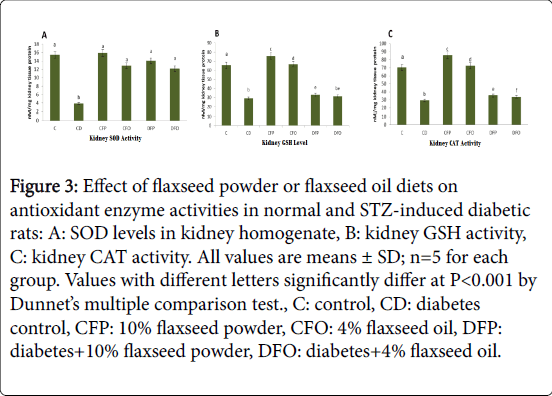 Natural herbal dietary supplements that are capable of modifying diabetes and hyperlipidemia become more popular and appealing to patients [23]. These herbal supplements include; Linum usitatissimum L.-the richest known source of α-linolenic acid (ALA, omega-3 fatty acid)-lignans, and dietary fiber [24], which could potentially lead to effects in the prevention of some chronic diseases such as; mitigating the effects of diabetes, cardiovascular diseases, renal pathologies, obesity, colon and rectum cancer, reducing serum cholesterol level, and promoting the intestinal evacuation [25].

This current study was performed to compare the flaxseed powder and oil effects on reduction of hyperglycemia and associated parameters in streptozotocin (STZ) induced diabetic rats. It is known that STZ produces hyperglycemia in rats. In this study, the cytotoxic action of STZ in diabetic rats (DC) produces significant (P<0.05) decrease of BWG, when compared to the C group. Moreover, both administration of DFP and DFO significantly (P<0.05) decrease BWG. Swanston-Fiatt et al. [26] explained that; induction of diabetic by STZ is associated with characteristic weight loss due to muscle wasting and catabolism of tissue proteins.

One of the principal causes of diabetes-induced injury is the formation of lipid peroxides by free radical derivatives [27]. The body has an effective defense mechanism to prevent and to neutralize the free radical-induced damage. This is proficient by a set of endogenous antioxidant enzymes such as SOD and CAT. These enzymes constitute a mutually supportive team of defense against ROS [28]. In diabetes, the balance between ROS production and these antioxidant defenses may be lost, resulting in oxidative stress and tissue inflammation. The reduced activities of SOD and CAT point out the tissues damage in the diabetic rats. A significant increase (P<0.01) in SOD and CAT activities in heart, liver, and kidney homogenate tissues were observed in DFP group as compared to the DC group. This indicates the antioxidant activity of the flaxseed Powder.

Regarding non-enzymic antioxidants, GSH is a critical determinant of tissues susceptibility to oxidative damage and the depletion of GSH has been shown to be associated with diabetic status [29]. The present study revealed a significant increase (P<0.01) in GSH level in heart, liver, and kidney homogenate tissues were observed in DFP group as compared to the DC group, the increase in GSH level may be due to the GSH synthesis or GSH regeneration, while these results disagree with Hussein et al. [30] who indicates that Flaxseed oil as a source of omega-3 fatty acids (mainly α-linolenic acid) enhanced omega-3 fatty acids to compete with omega-6 family for incorporation into cell membrane resulting in a reduction of arachidonic acid (omega-6) liberation from the cell membrane [31]. The reduction of arachidonic acid leads to a reduction of reactive oxygen species (ROS) and increasing antioxidant enzymes, while Pilar et al. [31] indicated that both flaxseed oil and flaxseed powder can positively affect enzymatic antioxidant defenses both in healthy and diabetic groups. Moreover, Han et al. [32] suggested that fiber flaxseeds would be valuable candidates as functional products and dietary supplements production owing to the higher bioactive values as well as flaxseeds oil.

In the present study, a positive correlation between hyperglycemia and hyperlipidemia was obtained. In diabetic rats (CD), serum TC, TG and LDL levels were found to be significantly (P<0.05) elevated whereas HDL levels decreased when comparing to C group. This hyperlipidemia occurs due to increased breakdown of lipid and free fatty acids from peripheral stores. Moreover, hyperlipidemia with elevated levels of triglycerides results in oxidative stress and inflammation which may independently potentiate the adverse effects of hyperglycemia [33]. In the present study the increased levels of blood glucose, TC, TG and LDL in STZ induced rats (DC) were significantly (P<0.05) lowered by the administration of DFP as compared to DC group. Moreover, DFP significantly (P<0.05) increases the level of serum HDL-c when compared to DC group, which is in the line with the findings of Kaur et al. [33] and Kaithwas and Majumdar [34]. While these results disagree with the findings reported by Paschos et al. [35] who found that flaxseed powder and flaxseed oil have the ability to lower blood cholesterol levels in vitro and in vivo studies on animal models.

Antihyperglycemic effect of flaxseeds powder can be attributed to the presence of Secoisolariciresinol diglucoside (SDG) [36]. SDG is the most abundant lignan in flaxseed. The lignan SDG is present in a greater quantity in the seed coat. In humans, ingested SDG is converted by bacteria in the colon to biologically active lignans enterodiol and enterolactone [37]. These SDG metabolites possess antioxidant activity and have been shown effectively inhibit the development of type 1 and 2 diabetes. On the other hand, such an effect of flaxseeds could be related to the partial regeneration or preservation of pancreatic β-cell mass after STZ treatment [38].

The antihyperlipidemic effect of flaxseed is attributed to flaxseed and its derivative flaxseed oil which are known rich sources of unsaturated fatty acids such as oleic acid, and linoleic acid, which in return play a crucial role in reducing blood cholesterol in both humans and rats [39]. Fixed oil as a precursor to omega-3 fatty acids also improve VLDL turnover. VLDL is converted to VLDL remnants, which may be rapidly cleared by LDL receptors in the liver or further metabolized to LDL. The antihyperlipidemic activity of fixed oil could possibly be attributed to, (i) increase in hepatic LDL receptor activity, (ii) increasing the clearance of LDL from plasma and acceleration of the uptake of VLDL remnants by the liver, allowing fewer of these particles to be converted to LDL and thereby reducing the rate of LDL formation and (iii) inhibition of HMG-COA reductase and subsequent reduction in production of TG and VLDL in the liver [40].

Interestingly, Movassat and Portha [41] recently found that conjugated linoleic acid and Omega-3 fatty acids can activate keratinocyte growth factor (KGF) expression. KGF can improve β-cell regeneration in rats with streptozotocin-induced diabetes. Thus, flaxseed supplementation could probably lead to increase KGF expression, thus contributing to pancreatic regeneration and/or preservation. Similar data were found in vivo in mice in which the dietary supplementation of conjugated linoleic acid and Omega-3 polyunsaturated fatty acids augmented insulin secretion partly because of increased islet glucose oxidation [42,43]. Thus, the supplementation of diet with flaxseed which provided linoleic and linolenic acid had a protective or regenerative effect on the endocrine pancreas.

The most important result of the present study was that diabetic rats, fed on 10% flaxseed powder diet (DFP) were able to partly recover from STZ-induced diabetes within 8 weeks compared to DC.

It can be concluded from the results that the administration of flaxseed powder has better antihyperglycemic and antihyperlipidemic effects. The study also suggests the responses in blood parameters in these animals are also demonstrated that flaxseed powder supplementation may act as both antioxidant agents as well as hypoglycemic agents. Moreover, flaxseed powder can be an excellent adjuvant support in the curative of diabetes mellitus and its complications in STZ induced diabetic rats.