For individual classes of groups, a relationship is established between the existence of an algorithm for calculating the index of a subgroup and the algorithm for solving the problem of occurrence.

In recent years, difficult algorithmic problems in group theory have found practical application in cryptography. A difficult or even algorithmically unsolvable group-theoretic problem can be a reliable basis for cryptographic protection of the protocol. For cryptographic applications, the classical problems of Dan (the word problem, the conjugacy problem and the isomorphism problem) are of interest, and the algorithmic problems in group theory that are closely related to the classical ones. Such are the problem of the occurrence and the problem of the index.

A finitely generated group contains only a finite number of subgroups for every given finite index. Therefore, if the problem of occurrence and the index problem are solvable in G , then having obtained information that the index of the subgroup H in G is finite, it is possible to calculate this index in a finite number of steps by a simple search of subgroups of finite index (for a description of such an algorithm see, for example, [1]).

For a particular group G, computing its order is not a mass problem. However, if G is infinite, then there are subgroups of infinite and finite indices. Such indices have, for example, trivial subgroups, but it is possible that in G there are other subgroups, both finite and infinite index. If G is an infinite simple finitely presented group, then the solvability of the index problem follows from the solvability in G of the occurrence problem, since in this group only one subgroup of finite index is itself G.

The classical Kronecker-Capelli theorem of linear algebra is essentially an algorithm for solving the problem of entering into a subspace of a finite-dimensional vector space. This algorithm consists in calculating the smallest possible number of elements in the generating system. This number - dimension - is found by means of a sequence of changes in the generating set of the subspace and its transformation into a basis.

(3) removal of a single element.

If as a result of such transformations a single element appears, then this unit from the generating set can be deleted.

Let H = gr (h1, h2, ..., hm) be a finitely generated subgroup of the free group Fn. A system of free generators for a subgroup H is called a basis, and the number of elements in a basis is called a rank. This basis is the Nilsen set of generators see, for example, [4]. Let R be some set of elements from the free group Fr written in the reduced, that is, irreducible, form. Elements of the set R are words in the alphabet a1, a2, ..., ar and their inverses, and abbreviations inside words are impossible. The symbol R-1 denotes all the inverse elements of R. A word w in Fr is said to be isolated with respect to the set R if there is at most one element v in R ´ R-1 such that w is an initial or terminal subword for v. The leading beginning of the word v is the initial subword s of the word v whose length satisfies the inequality

Similarly, the leading end of the word v is defined.

The set R of non-unitary, incontractible words is said to be Nielsen if:

1) the older beginnings and the upper ends of all words from R are isolated;

2) for each word of even length, at least one of its halves - left or right - is isolated.

Using the transformations (1) - (3) of the generating set in a finite number of steps, one can obtain the Nilsen generators for the subgroup H, and thus find the rank of H. This method of obtaining free generating subgroups of free is usually called the Nielsen method.

Using the Nielsen method, it is possible in a finite number of steps to find out whether an element of the free group enters or does not belong to a given finite generated subgroup, that is, the occurrence problem for free groups is algorithmically solvable.

Using the Schreier formula, the index problem of a subgroup of a free group reduces to calculating the rank of a subgroup, which can be found using the Nielsen method.

Thus, the index problem for a free group is also algorithmically solvable.

We call a group G almost free if it contains as a subgroup of finite index a free non-cyclic group F. If a finitely presented group G is almost free, then its free subgroup F has finite rank; in addition, we can assume that F is normal in G.

The solution of both problems under discussion for an almost free group is reduced to solving this problem for the free part F.

In an almost free group, both the index problem and the problem of occurrence are solvable.

Each element of the direct product A × B has a representation in the form of the product ab, where a × A and b × B.

In the direct product of two almost free groups, the index problem is algorithmically unsolvable.

The index G1 in G is equal to

, and is therefore finite.

Then by the Schreier formula the rank of the subgroup P is equal to s (m − 1 + 1,and this number is not less than k. If the rank of the subgroup P turns out to be strictly greater than k, then the representation of the group R is supplemented by s-k generators and equates these elements to unity. Without loss of generality, we can assume that this has already been done, that is, s = k.

In the group G1 we take two subgroups:

This means that for any word j the equality 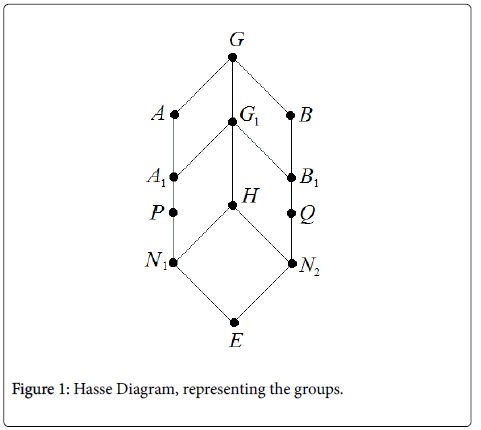 The assertion is proved.

Algorithmic unsolvability of the problem means that there is no machine solution for such a problem. For example, no technique will ever be able to answer the question, whether a finite or infinite index of an arbitrarily chosen finitely generated subgroup in the group F2×F2, given by the representation

We note that in some cases the calculation of the index of a finitely generated subgroup in a finitely determined group can be entrusted to the technique. True, the result can be obtained, as a rule, only in the case of a finite (and relatively small) index of the subgroup. Computer calculations of this kind associated with the solution of specific problems in group theory are presented in [6-9].

For the direct product of two free groups of the second rank, the problem of occurrence is also unsolvable [10]. The proof of this assertion in [9], carried out for only one group F2 × F2, is also carried over to the general case of a direct product of almost free non-cyclic groups.

Thus, there arises an infinite series of finitely presented groups for which the occurrence problem and the index problem turn out to be equivalent - both are undecidable.

From positive answers to both questions, the following statement would follow: in the class of finitely presented groups the problem of occurrence is algorithmically equivalent to the index problem.