The most severe postulated events (called bounding case) should be considered for effective evaluation of system design in nuclear power plants. In this article the most severe case for evaluation of core catcher design is discussed. Among the most important boundaries for mitigation of severe accident effects, core catcher is the last one. Severe accidents are divided into two categories: Low Pressure (LP) and High Pressure (HP). From the core catcher point of view, HP accidents are more severe because the corium is evacuated to the core catcher at a higher pressure, and the possibility of failure is increased. Among the HP severe accidents, the most severe cases belong to the Station Black Out (SBO) and Loss of Offsite Power (LOOP). After Fukushima Daiichi accident, most of the published researches illustrate that SBO is the bounding case in nuclear power plant severe accidents. In this study, MELCOR code is used to compare the severity of an SBO and a LOOP for the core catcher design. The first step in this analysis is development and verification of a steady state MELCOR model of the IR-360 plant. Then, in the severe phase, the SBO and LOOP accidents are simulated using MELCOR for the IR-360 plant. Finally, the results are compared with each other. According to results it is concluded that the LOOP is more severe than the SBO from the core catcher point of view.

In nuclear power plants (NPPs), severe accidents may lead to melting of the reactor core and reactor internal materials. The possibility of core damage and the subsequent release of radioactive materials to the environment are of a great concern to the public because it would threat the safety and health of human and environment.

Therefore, severe accident mitigation features should be developed. There are different strategies to achieve this goal. Although these strategies have generic features in common, they depend on specific reactor design. In the design phase, assessment of the design should be accomplished by analyzing every single feature in the most severe accident condition. Hence, selecting proper severe cases plays vitally important role in assessing the design. One of the common strategies is the use of a core catcher which is a core meltdown retention device for catching the melt and long-term cooling of the molten corium outside the reactor vessel.

In most of the research that has been done recently, SBO as severe accident has been analysed and studied. For example, the following can be noted. After the disaster at Fukushima Daiichi, realistic analysis SBO accident analysis has been performed to evaluate the effectiveness of severe accident management strategies. Simulation and analysis of a severe accident caused by SBO for a CPR1000 power plant using MELCOR is carried out [1].

SBO has been selected as a reference scenario in severe accident analysis of a VVER440 design with MELCOR for in vessel retention strategy simulation [4]. MELCOR, MAAP4 and SCDAP/RELAP5 results were compared as part of an evaluation of SBO modeling [5].

However, overall reviews of published studies indicate that SBO commonly has been considered as the worst case in severe accident analyzing.

Depending on the scenario, discharge of core melt to the core catcher can occur at low pressure or high pressure of the reactor coolant system. If the vessel failure occurs with high pressure, High Pressure Melt Ejection (HPME) phenomenon occurs. Progression of the accident in the containment depends strictly on the pressure of the primary coolant system at the onset of vessel failure. The worth cases from core catcher design point of view are sequences with possibility of HPME. Hence all the accidents which lead to the reactor coolant depressurization before vessel breach such as LOCAs can be omitted from core catcher design evaluation procedure. SBO and LOOP (Loss of Offsite Power) are both accidents with loss of electrical power which can initiate high pressure scenario. The severity of the LOOP and SBO accidents for core catcher design evaluation and development are compared in present study.

SBO can initiate severe accident scenarios in which majority of the core would melt. LOOP stands for loss of non-emergency Alternating Current (AC) power assumed to result in the loss of all power of the plant, except diesel generators. SBO, on the other hand, implies loss of all offsite and onsite AC power concurrent with a turbine trip.

For this purpose, MELCOR model of IR-360 nuclear power plant was prepared. Then LOOP and SBO accidents were simulated by MELCOR for IR360 reactor.

MELCOR is a fully integrated systems accident code and includes models for simulating important thermal-hydraulic and fissionproduct phenomena which may occur during a postulated accident in a pressurized light water reactor. Several works have been performed on different issues with the MELCOR code [6]; such as:

The analysis with MELCOR performed to assess the effect of a variety of design parameters and operational procedures on a station blackout severe accident at the Peach Bottom Atomic Power Station [7]. The MELCOR code evaluation independently, using empirical data consistent with the recommendations of the Committee on the Safety of Nuclear Installations of the Organization for Economic Cooperation and Development (OECD/CSNI) validation matrix for core degradation codes [8]. A sensitivity analysis performed on the evolution of severe accidents that can be expected during a Loss of Coolant Accident (LOCA) at an Advanced Power Reactor 1400- MW (APR1400) [9]. The study focused on the impact of a direct vessel injection into the reactor down-comer in mitigation of a severe core degradation; the impact of different break locations and sizes; as well as on the timings of the key thermal-hydraulic responses of the containment spray systems, the severe degradation of the core, and evolution of the core materials. Several aspects analysed related to the source term in the Phebus FPT1 experiment, which contemplate circuit thermal-hydraulics, fission product and structural material release, vapours and aerosol retention in the circuit and containment, vertical line aerosol deposition and steam generator aerosol deposition [10].

This study shows that LOOP accident can be the worst case for core catcher design evaluation than SBO accident. The article is organized as follows. Section 2 describes general features of IR-360 and the MELCOR code model of this NPP. The main results are presented in section 3 and the main finding are summarised in section 4.

Description of Plant and Research Methodology

IR-360 NPP is a typical pressurized water reactor under design. The thermal power of reactor is 1130 MW which is being cooled with two coolant loops. The Reactor Coolant System (RCS) consist of similar heat transfer loops connected in parallel to the reactor pressure vessel. The plant includes reactor pressure vessel (RPV), two steam generators (SG), two reactor coolant pumps (RCP), one pressurizer (PRZ) with a pressure relief tank (PRT) and pressurizer safety valves (PSV), and associated systems such as chemical and volume control system (CVCS), as well as engineered safety features design of an ex-vessel corium cooling system has been recently considered for this reactor.

The containment is equipped with a Core Catcher for molten core debris including the inventory of the core, internals, and lower reactor pressure vessel (RPV) head. Core debris trap is provided in the reactor cavity in order to decrease the amount of core debris dispersion to the upper compartment. The functional principle of the core catcher is to spread the molten core debris over a large area and stabilize it by quenching it with water from the in-containment refueling water storage tank (IRWST). The goal of this system is to eliminate the potential for containment failure by any means derived from the core melt, including the interaction between core melt and the containment structure and the effects of melt cooling (i.e., overpressurization of containment). A section view of IR-360 core catcher is shown in Figure 1. The present work is motivated by the need for severe accident analysis in support of the plant design. 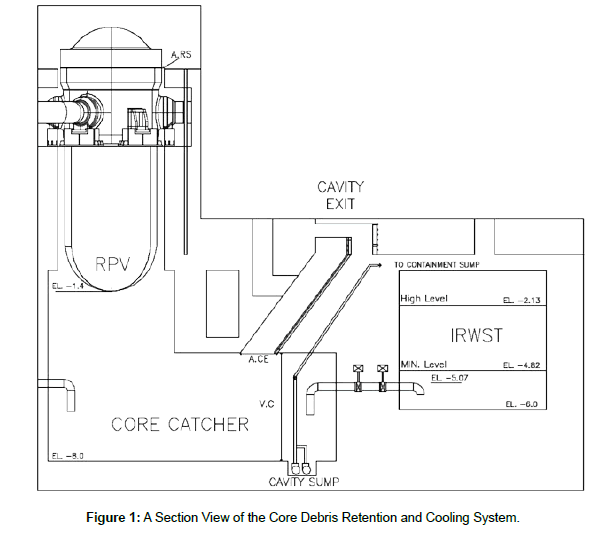 Figure 1: A Section View of the Core Debris Retention and Cooling System.

The version of MELCOR used for these analyses is 1.8.6, released in (2005) [11]. One of the advantages of MELCOR code is that it represents the current state of the art in severe accident and source term analyses. All aspects of the accident are calculated simultaneously so that important feedbacks among the models are captured.

Methodology of the analyses is aligned with the procedure suggested by IAEA-SRS-No.023 (2002) [12]. A database is developed for the plant components which contains all the design data for each of the components. A general flowchart illustrating the modeling procedure is shown in Figure 2. 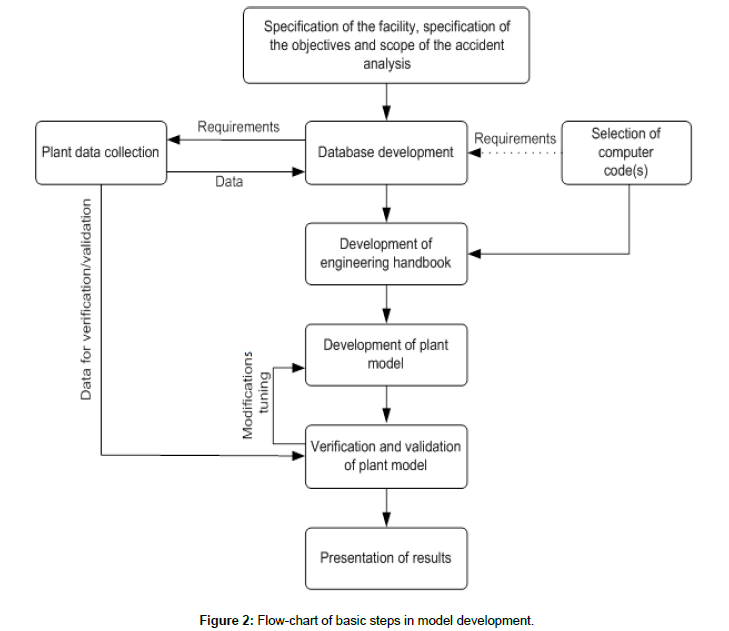 Here a summary of the model is provided and nodalization of the plant will be discussed concisely. The basic input models are given by control volume, the flow path and heat structure data which together describe the major reactor systems. Figure 3 shows the overall nodalization developed for IR-360 modeling by MELCOR. The containment of IR-360 NPP is modeled consisting of containment main compartment, annulus, environment, reactor cavity (core catcher), steam generator and other compartments of loop, upper part of vessel compartment, corridor region and In-containment Refueling Water Storage Tank (IRWST). Also, the frontline systems as listed in the accident sequence modeling of IR-360 are modeled. The steady state qualification includes different checks: one is related to the evaluation of the geometrical data and of numerical values implemented in the nodalization; the other one is related to the capability of the nodalization to reproduce the steady state qualified conditions. Table 1 summarizes the calculated parameters that are crucial for the qualification of the steady state model. According to this table, the calculated values are fairly below the acceptability criteria [13] and confirm the credibility of IR-360 steady state model.

In SBO accident, all AC power sources including all EDGs are lost. Reactivity is controlled by reactor trip signal. In the present SBO scenario, there is no recovery for onsite and offsite powers. Also, EFW and CCW fail to remove decay heat. Failure of CCW discontinues RCPs cooling and, consequently, seal injection to RCPs is completely lost. RCP mechanical seal cannot withstand this condition and RCP LOCA occurs. The present model is set up to include 21 gpm nominal leakage rate at 15.5 MPa for each of the two loops.

The difference between LOOP and SBO scenarios which is analyzed in this paper is in the RCPs leakage. The leakage would depressurize the Reactor coolant system (RCS) due to the mass flow rate of the leakage. This can decrease the consequence of HPME at the onset of melt ejection from vessel breach. 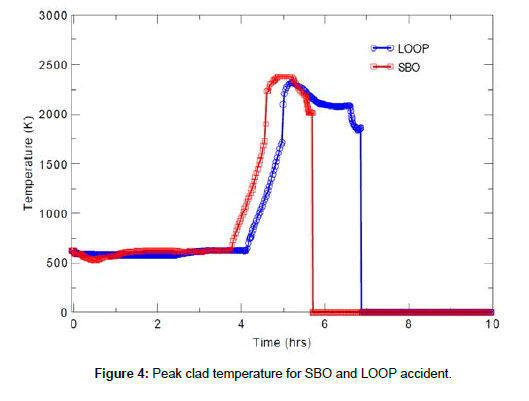 Both SBO and LOOP are high-pressure melt ejection severe accidents. In Figure 5, reactor coolant pressure in SBO and LOOP conditions are shown. In the case of RCP seal leakage, RCS pressure decreases slightly. This can mitigate HPME in severe accident scenario. In LOOP scenario, RCS pressure change in high pressure range and HPME will be continued until the end of corium evacuation to the core catcher. This leads to increase HPME effect in core catcher. 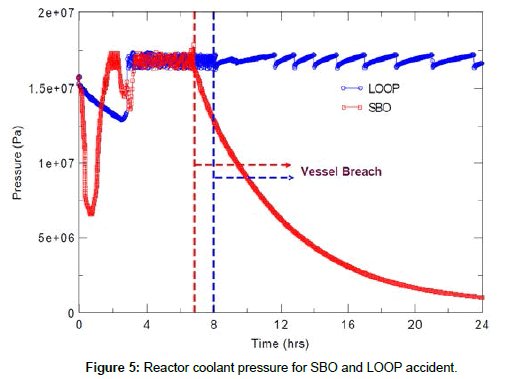 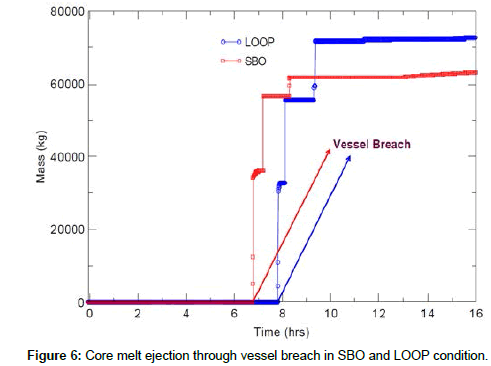 Inside core catcher, Molten Corium Concrete Interaction (MCCI) leads to corrosion of containment basement concrete and the mass of corroded concrete is aggregated with the corium. Mass of heavy resultant mixture in core catcher is shown in Figure 7. 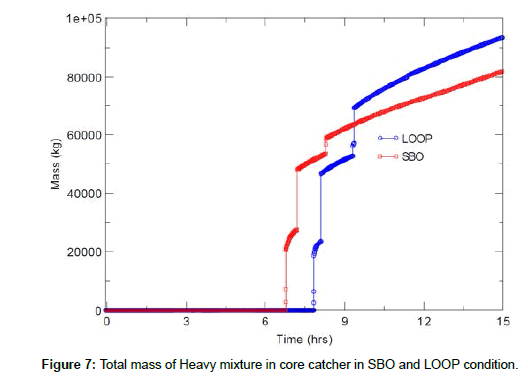 The leakage from RCS decreases corium heat in SBO condition. In the absence of RCP leakage in LOOP condition, a larger amount of heat is generated in corium. Figure 8 shows heat loss to concrete in LOOP and SBO conditions. This heat goes to the ablation of concrete. More heat in the LOOP condition lead to more erosion of containment basement. 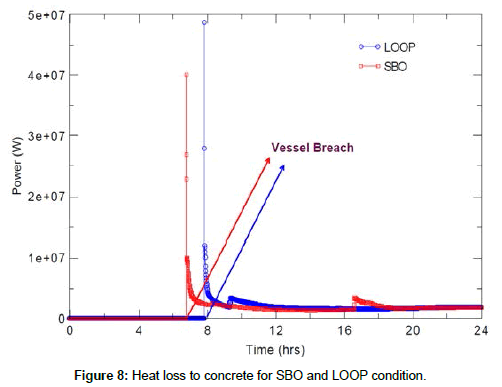 Figure 8: Heat loss to concrete for SBO and LOOP condition. 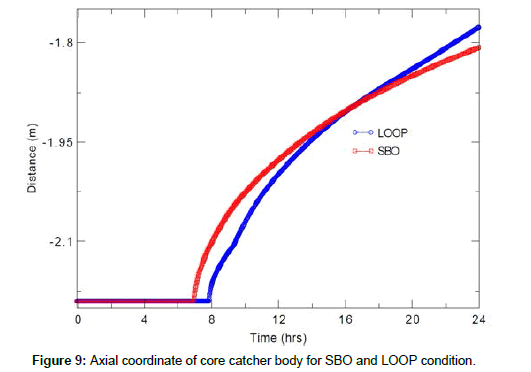 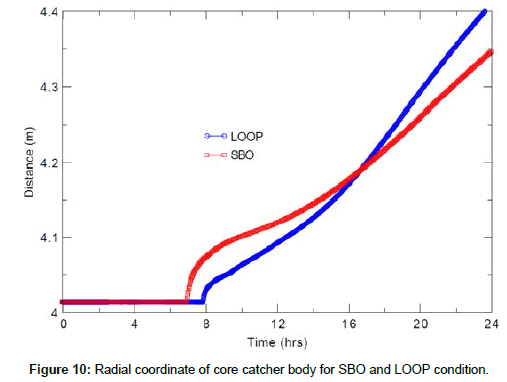 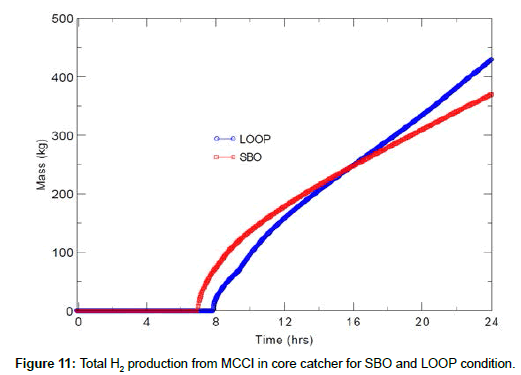 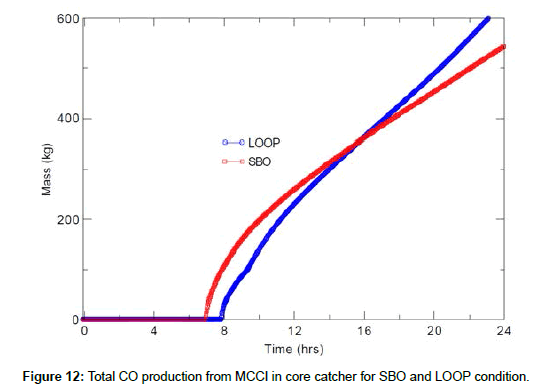 Despite the recent researches and studies which are published and have introduced the SBO as the worst case, this study shows that the LOOP accident is the worst case from the core catcher design aspect.