Pulpotomy is a frequent endodontic treatment performed in children. Even though it is a safe procedure, side effects have been reported. A 10-year-old boy came for a dental checkup. X-ray findings showed a radiolucent lesion above the maxillary second primary left molar, related to the permanent tooth. Extraction of the first and second primary molars was realized under local anesthesia. The cystic lesion was removed surgically and histo-pathological analysis showed an inflammatory dentigerous cyst. A marsupialization cavity was created to allow eruption of the premolars. After a one-year follow-up, the bone had completely regenerated and premolars had completely erupted.

Preservation of permanent and primary teeth in healthy state remains the crucial aim of dentistry. Several therapeutic measures are defined on the damage and pathologic involvement of the tooth pulp tissue [1]. Pulpotomy is used for treating cariously exposed pulps in asymptomatic teeth or with transitory pain, without signs of periradicular pathology [2]. Although it is one of the most widely accepted clinical procedures, side effects have been reported such as malposition, delay in eruption, enamel defects, discoloration, damage to the permanent dentition and cyst formation [1,2]. These cysts can attain considerable size with minimal or no symptoms; therefore, early detection and removal of the cysts is imperative to reduce morbidity and consequences [3]. The frequency of dentigerous cysts in children is reported low (4-9%) in the dental literature [4]. Dentigerous cysts types are reported to be developmental and inflammatory [5]. The developmental type encloses the crown of an unerupted tooth at the cemento-enamel junction and is called “tooth containing cyst” [3]. Radiographically, the lesion has a welldefined sclerotic border, and a welldemarcated unilocular radiolucency which is surrounding the crown [6]. Teeth most commonly associated are mandibular third molars, maxillary canines, mandibular premolars, and very rarely, maxillary third molars, the upper premolars and the central incisors [7]. It is frequently discovered when radiographs are taken to investigate a failure of tooth eruption, a missing tooth, or misalignment [7]. The inflammatory type progresses from the root apex of the deciduous tooth and reaches the development of the dentigerous cyst around the unerupted permanent tooth. It is commonly seen during the first and second decade of life (mixed dentition period), more in boys than girls, and more in the mandible than maxilla [6]. Radiographically, the cyst is seen as pericoronal unilocular radiolucency attached at the cemento–enamel junction of the impacted tooth and in continuation with the lamina dura of the deciduous tooth [6].

If cystic lesions are not early diagnosed, they could create many complications such as displacement of involved successor, dilacerations of roots, and destruction of bone. The earlier they are detected, the less damaging effects will be on the permanent germ/primary tooth unit, since the lack of clinical signs does not always mean therapeutic success [8].

This case report describes a rare case of an inflammatory dentigerous cyst of an unerupted upper premolar associated with a pulpotomized deciduous molar along with its manifestations and management.

A 10-year-old boy was referred to the pediatric dentistry department of Saint-Joseph University for a checkup. Intraoral examination showed a mixed dentition and a preformed metal crown on the maxillary second primary left molar (Figure 1). Systemic health status of the patient was normal; his medical history was not contributory. Figure 1: Intraoral image at the first visit of the second deciduous molar with a stainless steel crown.

The panoramic x-ray revealed an asymmetric development of the definitive upper premolars. There was no missing primary or permanent tooth (Figure 2). On the maxillary left side, a digital retro alveolar x-ray showed a very large bone loss and a radiolucent lesion above the second primary molar, related to the permanent tooth (Figure 3). The Cone Beam Computed Tomography (CBCT) images showed a unilocular lesion with well-defined borders located between the second deciduous molar roots and the crown of the definitive tooth underneath it, and a thinning of the vestibular and palatal cortical bone in the sagittal view (Figures 4 and 5). Figure 2: Panoramic X-ray image. A radiolucent area is observed between the second primary molar tooth on the left maxilla and the tooth germ of the second premolar. 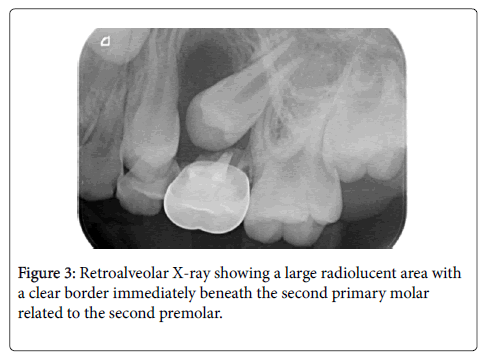 Figure 3: Retroalveolar X-ray showing a large radiolucent area with a clear border immediately beneath the second primary molar related to the second premolar. 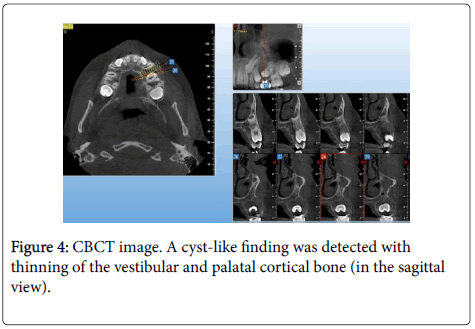 Figure 4: CBCT image. A cyst-like finding was detected with thinning of the vestibular and palatal cortical bone (in the sagittal view). Orthodontic and surgical consultations were done to establish a treatment plan. Patient's parents' consent was taken prior to the procedure.

Extraction of the first and second primary left molars was realized under local anesthesia (Figures 6 and 7). A marsupialization cavity was created to allow the natural eruption of the first and second premolars by relieving intra cystic pressure (Figure 8). An ablation of the cystic lesion was completed and a periodontal pack was placed over the cavity. During the procedure, cystic and liquid biopsies were performed, and histopathological analysis showed an inflammatory dentigerous cyst (Figure 9). Figure 7: Intraoral image of the cyst after the extraction of the primary teeth. 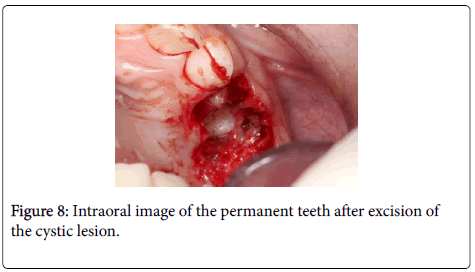 Figure 8: Intraoral image of the permanent teeth after excision of the cystic lesion. 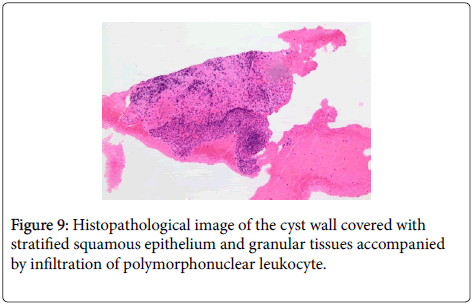 After the dental surgery, recommendations were given to the parents and antibiotic treatment (Amoxicillin 250 mg/5 ml) was prescribed for a week.

During the postoperative follow-up period of two months, signs of bone healing were perceived radiographically (Figure 10). Clinically the first premolar had normally erupted. After a four months’ followup, more significant bone healing was observed in addition to the partial eruption of the second premolar (Figure 11). After a one-year follow-up, the bone had completely regenerated and both maxillary left premolars erupted in normal positions (Figures 12 and 13). 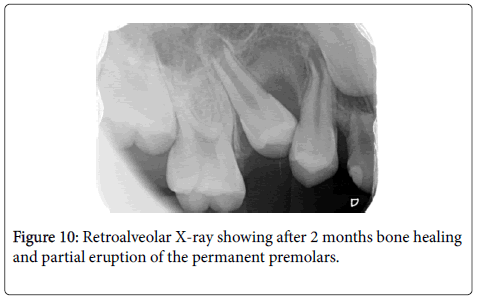 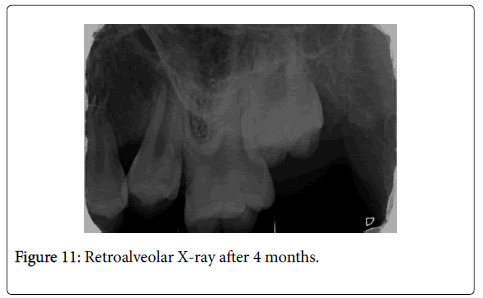 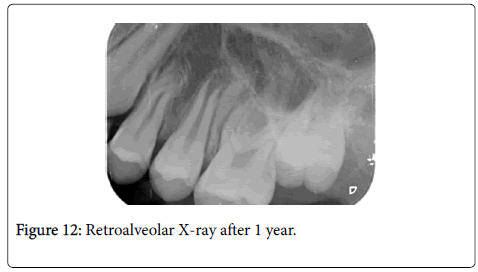 Figure 13: Intraoral image of the upper left premolars at the visit after 1 year.

Pulpotomy is the most frequent endodontic treatment performed in children; even though it is a safe procedure, it is also the most controversial [9]. Therefore, accurate diagnosis of pulp status and proper materials and techniques are essential for success of pulpotomy and if some doubts about condition of pulp exist, pulpectomy or extraction must be considered [2]. Moreover, periodic postoperative radiographic examination and check-up of such treated cases should be done regularly because materials such as zinc oxide eugenol used for pulpotomy have been mentioned as potentially stimulating factors for rapid growth of cysts and absence of clinical symptoms does not mean that the pulpotomized tooth is healthy [10,11]. In this case report, since pulpotomy of the primary molar was performed in a private office, no information about the materials used was available and no judgments regarding this matter could be set.

The ages of twenties or thirties are the most common periods when the ages of the dentigerous cyst cases are considered [5]. The inflammatory type of a dentigerous cyst is found only in the mixed dentition period and mostly associated with an infected deciduous tooth. It generally involves mandibular premolars [12]. In this case report, the patient was only 10 years old and the cyst involved a maxillary premolar. Conventional panoramic and periapical radiographs are generally enough to detect the cystic lesion, but they may fail to define its full extent. It is therefore important to use more advanced imaging techniques, such as CBCT, especially in extensive lesions. CBCT imaging provides more accurate information about the lesion’s size and its relationship to adjacent anatomical structures [13].

The relation between prolonged inflammation of a primary tooth and development of cystic lesions in periradicular region has been discussed in many reports [7,14]. These lesions are of frequent existence and the differential diagnosis between them is important to plan an adequate treatment [15]. In the present case, the differential diagnosis included odontogenic keratocyst, unicystic ameloblastoma and radicular cyst. It is important to examine clinical, radiological, and histological findings together to make a final diagnosis [15].

Treatment modalities of cysts generally range from enucleation of the cyst along with extraction of the involved tooth, to marsupialization. The conservative treatment approach which does not involve sacrificing the unerupted permanent tooth is preferred in mixed dentition or when this tooth has eruptive potential according to the angulation and position, as well as the degree of root formation [16]. In this case report, a faster healing of the lesion was noted since the accessory cavity was created by the extraction of the involved deciduous teeth and because children have a better ability to regenerate bone than adults [17]. The period of 3 months after marsupialization is suggested as the critical time to decide for an additional treatment to stimulate tooth eruption between tooth extraction and orthodontic traction [4]. Nevertheless, complete eradication of the cyst is recommended in cases where the permanent tooth is severely damaged, and hopelessly displaced, or carcinomatous potential is diagnosed [12].

This case report highlights the need for regular supervision of pulp treated teeth, even if they are asymptomatic, as well as eruption phase of permanent and primary teeth. The use of different types of X-rays (panoramic, retro alveolar and CBCT) in pediatric dentistry is necessary in the early diagnose process of cystic lesions. Clinical and histological examinations are also of paramount importance in order to have a definitive diagnosis and an adequate conservative treatment in mixed dentition period. 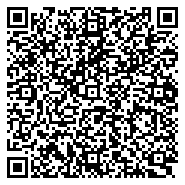