Objective: The purpose of this study was to assess the prevalence of dental erosion and its associated risk factors among 9-14 yearold children with orthodontic braces.

Methods: This cross-sectional survey was performed by calibrated examiners in a random sample of 447 patients (250 - boys and 197 - girls). Clinical examination was done for dental erosion using the diagnostic criteria of Eccles and the Index of O’Sullivan to record the distribution of the dental erosion. A self-administered questionnaire was developed to record information about consumption of drinks. The analyses were performed using SPSS software 16.

Results: Overall significant difference in the prevalence of dental erosion was seen in all the factors except age group. The most frequently affected surface was the incisal or occlusal edge (43.2%). The results showed that males, children who consumed carbonated drinks, fruit juice and those who had habit of swimming had more dental erosion.

Conclusions: Dental erosion is a major public health problem especially among children with orthodontic cases. The prevalence of erosion is commonly associated with carbonated drinks and swimming. So, orthodontists should offer preventive care and promote a healthier lifestyle by education to children, who are at increased risk of dental erosion.

Non-carious lesions are becoming a progressively significant problem in oral health. Dental erosion is the one of the commonest non carious lesion affecting mainly child population. It is defined as the chronic irreversible chemical dissolution of the dental hard tissues caused by acids or chelants without bacterial involvement [1]. It has important risk factors including both extrinsic and intrinsic aspects. Intrinsic factors include ailment that cause vomiting or regurgitation such as gastro-oesophageal reflux and, anorexia nervosa [2] that cause a reduction in saliva flow. While the extrinsic ones include dietary habits such as acidic drinks and foods, sports like swimming in chlorinated pools and occupational factors [3]. Many surveys have shown upto 30% of erosion among 12 year old children and upto 53% among 5 year old children [3,4]. According to Xhonga and Valdmanis, Lussi et al. Smith and Robb, the prevalence of dental erosion ranges between 25% and 60% in child population. The most frequent origin of erosion is due to acidic foods as orange, lemon juices and drinks as colas, pepsi [2], as these drinks turn down the pH of oral cavity below 5.0–5.7. This reduction in pH cause demineralization of enamel and dentin which show the way to severe loss of tooth surface and ultimately results in sensitivity [5]. It is observed that frequent intakes of acidic juices are greater factor for dental erosion. Patients suffering from Sjogren’s syndrome are predominantly at higher risk of developing erosion since reduction in salivary flow results in decreased ability to balance the acidic environment of mouth therefore prevents remineralization [6].

A descriptive cross sectional survey was conducted among 447 children with braces aged between 9 – 14 years in Jammu, India. Ethical clearance was obtained from ethical committee of the Institute and informed consent was taken before starting the examination. All the available children undergoing orthodontic appliances of this age group during study schedule were selected and those who were on medication, having symptoms of bruxism, reflux and Sjogren’s syndrome were excluded.

Training and calibration of the examiner was done in the department before onset of the study. The diagnostic criteria of dental erosion were appropriately discussed. The results of the duplicate examinations were utilized for estimation of intra-examiner reliability.

The clinical examination was done in a well illuminated classroom using mouth mirrors and sterilized cotton rolls. The teeth examined were central incisors, lateral incisors, and first molars in both the arches. The diagnostic criterion for measuring dental erosion proposed by Eccles was used [8]. The index of O’Sullivan was adopted to record the distribution of affected teeth [9].

Site on erosion on each tooth

Code A: Labial or buccal only

Code B: Lingual or palatal only

Code C: Occlusal or incisal only

A self prepared questionnaire was used for recording demographic details, hobby of swimming, fruits and beverages intake.

Data was analyzed using SPSS version 15.0. Student’s t test was used to find the significance of difference in the means of dental erosion at p value <0.05. To test the association between independent sample proportions, chi-square test was done.

The total number of the sample who was examined was 447 including 250 - males and 197 - females. Further they were categorized according to age, habit of swimming, consumption of fruit juices and carbonated drinks.

In the present study, prevalence rate of dental erosion among all participants was 31.5% in orthodontic cases. According to gender a significant difference in the mean scores was obtained, where male children having more erosion compared to their counterparts Table 1. Similarly children in the older age group and with regular habit of swimming were having higher level of dental erosion Tables 2 and 3. The study subjects found with more intake of fruit juices and carbonated drinks, had comparatively more erosion at p=0.000 Table 4. Overall significant difference in the frequency of dental erosion was seen in all the factors except age group as shown in Table 5. According to the surfaces affected, most commonly tooth surfaces involved were incisal/occlusion (52.3%), followed by the labial/ buccal surfaces (26.5%), whereas in 9.6% of the cases, multisurfaces were involved as shown in Figure 1. 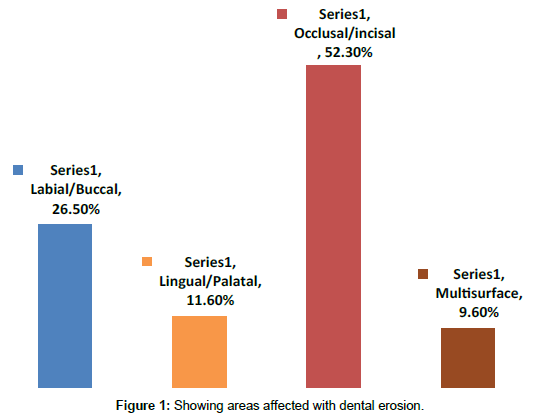 Table 5: Percentage of children having dental erosion according to different factors.

The overall prevalence of dental erosion in the present study was 31.5%, which was higher than the results of Caglar et al. in 2005 among school children in an Istanbul and Wang et al. in 2010 among 12-13-year-old children in Southern China [10,11]. But this prevalence is lower according to studies done by Deery et al. and Al- Majed et al. this difference could be due the present of orthodontic appliances [12,13].

The consumption of carbonated drinks showed positively correlation with dental erosion on the facial and occlusal surfaces, whereas severe palatal erosion occurred infrequently due to chronic vomiting [16]. The major affected surfaces of erosion are incisal/ occlusal as these surfaces being more prone to physical forces from mastication, that leads to more chances of dental erosion.

A significant relationship was seen between the consumption of fruit juices and carbonated drinks in association with dental erosion. The results of the present study reported are similar with the previous literature [10,11,17-19]. However study conducted by Arnadóttir et al. in among Icelandic teenagers did not show any correlation [20]. Owens also showed carbonated drinks as cola have strong association with tooth erosion, as it has a lot of carbonic acids which can rapidly dissolve the enamel surface of teeth [21].

It was also found that erosion was significantly higher in those who used to swim regularly and the findings were similar to study conducted by Talebi et al. among 12-year-old School Children in Mashhad [22]. The proposed pH of swimming pools is 2.7 which lead to acidic environment of oral cavity and results in erosion of teeth.

The present findings showed that male children had significantly more erosion than their counterparts. Similar results were obtained by Al Dlaigan et al. in Birmingham, UK, where male’s participants had more buccal/ labial and lingual/palatal tooth surface erosion, and similarly Dugmore et al. in a cohort of adolescents of different ethnics in UK also showed same results [17,23]. However there was no difference in the prevalence of dental erosion between males and females in study by Deery et al. in the UK. The lack of significant differences in the prevalence of erosion according to gender in this study could be due to similar patterns of exposure to the risk factors in this community [12].

The present paper stated that dental erosion is one of the most important problems among children with orthodontic appliances as they have more prone to habits of consuming carbonated drinks. Also children with habit of swimming tended to have more erosion. Dentists should pay more attention in identification of this lesion at its primary stage. And make an approach of preventive services and promote healthier lifestyles who are at increased risk of dental erosion.