Estimation of Anesthetic Success Rates: The Efficacy of Articaine versus Lidocaine

Purpose: Multiple randomized controlled trials have compared the efficacy of 2% lidocaine with 1:100,000 epinephrine to 4% articaine with 1:100,000 epinephrine. However, there is still uncertainty about expected success probabilities with various anesthetic modalities that needs to be addressed in the literature.
Methods: A search of PubMed and Google yielded over 200 potential articles. 13 randomized controlled trials met the eligibility criteria for inclusion in the analysis. Analyses compared lidocaine and articaine in teeth with and without a diagnosis of pulpitis for maxillary infiltration, mandibular buccal infiltration, and inferior alveolar nerve block (IANB).
Results: Articaine demonstrated superior anesthetic efficacy regardless of the type of injection administered or pulpal status. Depending on the type of injection, the estimated probability of anesthetic success with articaine was observed to be anywhere from 9.19 percentage points to 32.48 percentage points higher than lidocaine. The comparisons favoring articaine were highly significant for mandibular infiltration (p<0.0001) and maxillary infiltration (p=0.0100). While IANB nearly missed statistical
significance (p=0.0656), the estimated effect was of a clinically meaningful magnitude. Clinical Implications: A synthesis of current evidence suggests that articaine has a higher success probability than lidocaine regardless of injection type or pulpal status. In addition to statistical significance, the superior anesthetic success rate of articaine is estimated to be of sufficient magnitude to make meaningful clinical impact.

Patients with acute pulpitis pose a significant anesthetic challenge. They often present with high preexisting pain levels and hypersensitivity to painful stimuli, producing substantial anxiety in both the patient and the practitioner. To date, practitioners have relied on several different management strategies to achieve anesthetic success. However, there is no general agreement about which strategy is most effective, despite numerous published studies on this topic [1-27]. An assessment of current literature on this topic is needed to provide a comprehensive and informative appraisal of the current state of evidence regarding which anesthetic choice and which types of injections are most associated with successful pulpal anesthesia.

Two of the most frequently used anesthetics in dental practice are lidocaine and articaine. Several randomized control trials have been published in the literature comparing 4% articaine with 1:100,000 epinephrine to the “gold-standard”, 2% lidocaine with 1:100,000 epinephrine. The most comprehensive meta-analysis to date1 comparing articaine to lidocaine has been criticized for failing to distinguish between patients with and without a pulpitis diagnosis [2]. It is unclear from this meta-analysis if the statistical difference between articaine and lidocaine is dependent on the pulpal status of the patient. In this analysis a new statistical approach to this problem is utilized to construct and validate a model that predicts the probability of anesthetic success for each local anesthetic in a variety of commonly used treatment modalities. From this model we report the predicted anesthetic success rates when using articaine versus lidocaine in a variety of clinical settings (Figure 1). 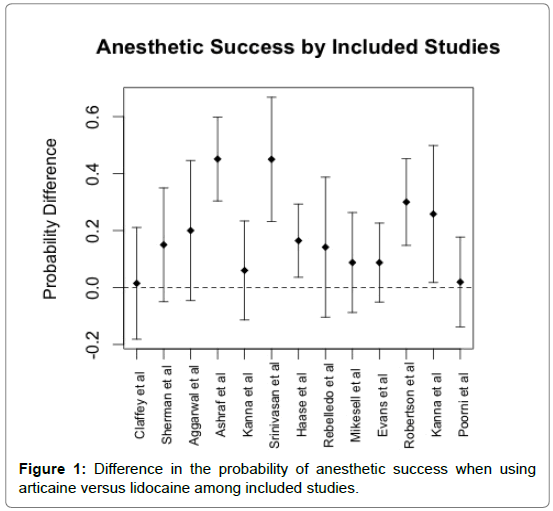 Figure 1: Difference in the probability of anesthetic success when using articaine versus lidocaine among included studies.

Only randomized control trials were included in this analysis in order to limit any influence differences between practitioners and study sites might have on the estimated success probabilities. Inclusion criteria are listed in Table 1.

Searches were conducted in PubMed, with over 200 articles considered for inclusion. Google searches were also performed in an attempt to locate any relevant unpublished studies. Each or these articles identified by title were further examined for relevance and compliance with the inclusion criteria. Sixteen articles that met the inclusion criteria were examined in their entirety. Of these sixteen, three were excluded for lack of an adequate control group. References within identified studies and review articles were also examined. Literature review was conducted in June of 2016.

The types of anesthesia modalities analyzed were maxillary infiltration, mandibular infiltration, and inferior alveolar nerve block (IANB). Five studies were omitted because we could not determine the exact location of local anesthetic administration. The studies analyzed included both patients with and without a diagnosis of pulpitis in both maxillary and mandibular application. Pulpal status, injection type, and location are accounted for in our analysis and thus do not confound the result.

Studies were excluded if they considered different dosages, lacked sufficient information to assess the location and techniques used in anesthesia, or were explicitly conducted in children. The sample size and anesthetic modalities utilized in each included study are reviewed in Table 2. Sensitivity analysis was performed for each study selected to ensure that none of the included studies, especially those with unique definitions of anesthetic success contributed excess heterogeneity to the analysis.

Acceptable outcome measures were defined as:

2. Completion of a procedure requiring complete pulpal anesthesia (endodontic therapy or extraction), without the need for additional anesthetic administration.

Data on the treatment administered, pulpal status, and resulting success rate were abstracted from the included studies. In the case of studies where mandibular infiltration was recorded by location in the mandible, the data for the first molar was used. In all instances, there was sufficient summary data available to re-construct the original data set for analysis with our logistic regression model. This is possible when the outcome is dichotomous, all covariates are categorical, and sufficient summary data is reported, because all participants in a given category will have the same data structure. As a result, we were able to build our model using original data instead of using summary measures, as is typically done in meta-analyses.

The statistical approach to this analysis differs somewhat from what has become typical in literature. In meta-analysis a type of mixed effects model that does not allow for adjustment of additional study characteristics is used which results in a pooled estimate of treatment efficacy across included studies. In this analysis we utilize a metaregression model. The mixed-effects model does not allow pooling of information across treatment modalities, i.e. IANB studies are not pooled with maxillary infiltration or mandibular buccal infiltration studies. The advantage to combining the various anesthetic modalities into one model is that it allows for better estimation of the variation between studies not attributable to the type of anesthetic or mode of administration [28]. The statistical model utilized in this analysis is given by,

Where i represents the study, tx1-6 represent the six treatments under consideration (IANB, maxillary infiltration, and mandibular infiltration for each of the two anesthetics), and pulp is an indicator for irreversible pulpitis. This model pools information about variation between studies due to differences in study populations, practitioner experience, etc. while estimating the efficacy of the various anesthetic modalities separately.

The percentage of the overall variation attributable to between study variation was estimated by the regression model to be 8.43% indicating low heterogeneity between studies once dosing (accounted for by selection criteria), pulpal status, type of injection, and location of injection are accounted for. Further, normality of the study level effects after adjustment for effects was examined via QQ-plot, which demonstrated that the included studies satisfy the mixed effects model assumption quite well without exception. Area under the ROC curve (AUC) was used to assess model discrimination. The model was validated using a cluster bootstrapping scheme with study as the cluster [29-31].

Data abstraction was completed from the included studies (N=1227). The estimated percentage of variation due to study (8.43%) was relatively small suggesting that study heterogeneity was unlikely to adversely impact the estimate of anesthetic efficacy.

The logistic regression model which accounted for the type of injection and its location demonstrated good discrimination giving an AUC of 0.726. The cluster bootstrapping algorithm yielded a 95% confidence interval for the AUC of (0.6502, 0.7783), suggesting a very small model optimism of 0.009. The odds ratios for the various anesthetic strategie are listed in Table 3.

Figure 2 displays prediction intervals for the probability of anesthetic success in an individual patient of particular anesthetic strategies. The dashed lines separate different injections and/or anesthetic strategies. We see that in each case, the evidence suggests that articaine is more effective than lidocaine. In the case of maxillary infiltration and IANB, the clinical difference between the two anesthetics is more modest (on the order of 9 to 14 percentage points). In the case of mandibular infiltration and the combination of inferior alveolar block supplemented with mandibular buccal infiltration, the effect is somewhat larger (27 percentage points). 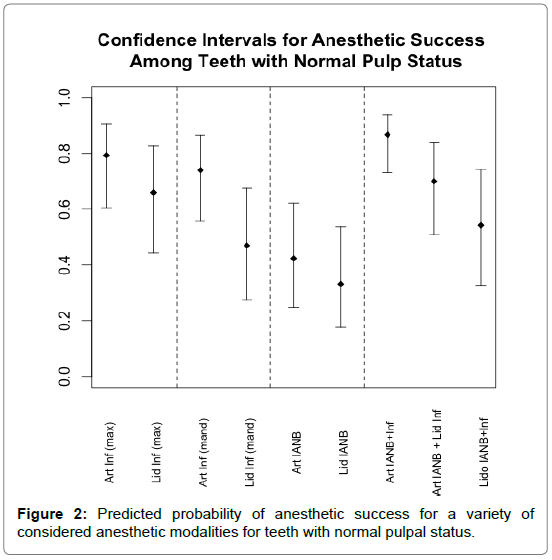 Figure 2: Predicted probability of anesthetic success for a variety of considered anesthetic modalities for teeth with normal pulpal status.

In terms of statistical significance, the inferior alveolar block had a marginally insignificant difference (p=0.066), but when taken in context with the other modalities this is very likely a clinically meaningful despite nearly missing statistical significance as a pharmacological mechanism is a very plausible explanation for the observed differences. The mandibular infiltration (p<0.001) and maxillary infiltration (p=0.010) were significant at the 0.05 level.

This study suggests clinically meaningful differences between 4% articaine and 2% lidocaine when a single carpule of anesthetic is administered. In the case of maxillary and mandibular infiltration the effect is strongly supported by the available evidence and estimated to be of a clinically meaningful magnitude. In the case of IANB the evidence is slightly less definitive but the estimated clinical magnitude of the effect is still meaningful. The highest predicted probabilities of success are with maxillary articaine infiltration and articaine IANB with supplemental articaine buccal infiltration for maxillary and mandibular teeth respectively.

Another important aspect of our study is that five of the included studies on teeth without pulpitis, accounting for 478 subjects, were completed with a crossover design. Our analysis purposefully ignores this fact and the within-subject correlation associated with this type of study, making our above conclusions about teeth without pulpitis conservatively biased. The statistical significance of the reported difference between articaine and lidocaine may be understated.

Evidence in the available literature suggests that articaine is superior to lidocaine in terms of anesthetic efficacy for both maxillary and mandibular anesthesia. This should be weighed by the practitioner against possible additional risk of methemoglobinemia and paresthesia that have been attributed to articaine.