The aim of this paper is to extend the applicability of an Ulm-Newtonlike method for approximating a solution of a nonlinear equation in a Ba-nach space setting. The su cient local convergence conditions are weaker than in earlier works leading to a larger radius of convergence and more precise error estimates on the distances involved. Numerical examples are also provided in this study. AMS Subject Classi cation: 65H10, 65G99, 65J15,49M15.

A large number of problems in applied mathematics and also in engineering are solved by nding the solutions of certain equations. For example, dynamic systems are mathematically modeled by di erence or di erential equations, and their solutions usually represent the states of the systems. For the sake of sim-plicity, assume that a time{invariant system is driven by the equation x = R(x), for some suitable operator R, where x is the state. Then the equilibrium states are determined by solving equation (1.1). Similar equations are used in the case of discrete systems. The unknowns of engineering equations can be func-tions (di erence, di erential, and integral equations), vectors (systems of linear or nonlinear algebraic equations), or real or complex numbers (single algebraic equations with single unknowns). Except in special cases, the most commonly used solution methods are iterative{when starting from one or several initial approximations a sequence is constructed that converges to a solution of the equation. Iteration methods are also applied for solving optimization problems. In such cases, the iteration sequences converge to an optimal solution of the problem at hand. Since all of these methods have the same recursive structure, they can be introduced and discussed in a general framework [1-12].

where An is an approximation of F’(xn). Notice that method (1.4) is inverse free, the computation of F0(xn) is not required and the method produces suc-cessive approximations {Bn} ≈ F’(x*)-1

The local convergence analysis of the method (1.4) is given in this section. Denote by U (v, ζ) the open and closed balls in B1, respectively, with center v ∈ B1 and of radius ζ>0.

We need to show an auxiliary perturbation result for method (1.4).

be a continuously Frechet-differentiable operator. Suppose that there exist

Then, the following items hold

is used which is stronger than our conditions (2.3) and (2.4). Notice also that since

where functions w1 is as function w but defined on Ω instead of Ω0.The ratio

Let λ be a parameter satisfying be a continuous and no decreasing function.

Denote byρ0 the smallest solution of equation f(t)=0 in (0,p) tthen, we have

In view of the above inequality the preceding quadratic equation has a unique positive solution denoted by ρ+ and a negative solution. Define parameter γ by

Then, we have that

Notice that we also have that

Next, we present the local convergence of method (1.4).

By the definition of method (1.4), we have the estimate

The results obtained here can be used for operators F satisfying autonomous differential equations [1,4,6,11] of the form

(c) The local results obtained here can be used for projection methods such as the Arnoldi’s method, the generalized minimum residual method (GM-RES), the generalized conjugate method (GCR) for combined Newton/finite projection methods and in connection to the mesh independence principle can be used to develop the cheapest and most efficient mesh refinement strategies [1,4,6].

Define function F on D for ω=(x,y,z)T by

Then, the Frechet-derivative is defined by

Notice that using the Lipschitz conditions, we get

where the bar answers corresponding to the case when only ω3 is used in the derivation of the radii.

X and Y are equipped with the max-norm

The corresponding matrix norm is

On the interval [0; 1], we consider the following two point boundary value problem

[6,8,9,11]. To discretize the above equation, we divide the interval [0; 1] into m equal parts with length of each part: h=1/m and coordinate of each point: xi=I h with i=0,1,2,…,m. A second-order finite difference discretization of equation (3.1) results in the following set of nonlinear equations

For the above system-of-nonlinearequations, we provide the Frechet derivative 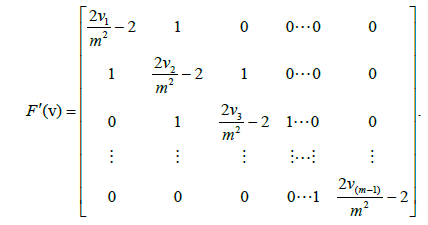 We see that for

where the bar answers corresponding to the case when only ω3 is used in the derivation of the radii.