Hysteroscopic Resection of a Giant Cervical Polyp with Preservation of Hymen

Objectives: To report a patient who had hysteroscopic cervical polyp removal in a day care setting with preservation of the hymen.

Setting: In a tertiary academic referral center, hysteroscopic cervical polyp resection was performed for a 26-year-old female with menorrhagia.

Main outcome measures: successful hysteroscopic resection of a 5 cm polyp with preservation of the hymen.

Results: Hysteroscopic resection of a 5 cm cervical polyp along with preservation of the hymen, is a more conservative alternative to conventional cervical poylpectomy. The result was the improvement of menorrhagia and patient satisfaction in terms of preserving her hymen.

Conclusions: Hysteroscopic resection of a cervical polyp in virgin females is possible with preservation of their hymen and this should be considered as a first option in patients wishing to conserve their virginity.

Cervical polyps are common pathologies seen in women of reproductive age with a reported prevalence of 1.5 to 10% [1,2]. They are considered to be a focal hyperplastic protrusion of the endocervical fold, with most women presenting in the per-menopause [3]. They vary in size, however, most of endocervical fold are less than 2 cm in diameter [4]. Giant polyps are those reported more than 4 cm in diameter [4]. These giant polyps can be confused with a cervical neoplasia [5]. Cervical polyps are usually an incidental finding in asymptomatic women, yet, they may present with abnormal vaginal bleeding [6]. Office hysteroscopy, a more recent way of direct visualization of genital tract pathologies has become available in the office setting [7]. If a cervical polyp is diagnosed, further assessment of the uterine cavity is unnecessary unless other indications exist [1]. The majority of polyps are benign, thus conservative management may be the first line in asymptomatic patients [6]. Recurrence rate is 12-15% within six to twelve months of resection [8]. Maintaining patient’s virginity is an issue that should be respected by physician, however this can prove a limiting factor in diagnosis and management of gynecological pathologies. In Küçük’s case series, 26 virgin patients had rigid hysteroscopy to evaluate different gynecological pathologies [9]. Five patients had cervical fibroids, and the hymen was preserved in all the patients. The largest mentioned lesion that was removed in the case series was a pedunculated cervical leiomyoma of 3 cm in size.

A 26-year-old single virgin female presented to the emergency department on 8 January 2017 with heavy vaginal bleeding for 8 days. Her medical history revealed a history of anemia possibly due to the irregular vaginal bleeding, and her surgical history revealed a history if tonsillectomy as a child. She had her menarche at the age of 12, which was regular initially and started becoming irregular in the past six months. She had received progesterone a month earlier in another hospital. Upon examination, the patient looked pale, her blood pressure was 132/ 72, her pulse was 118, and temperature was 37.2 Celsius. Her weight was 88.5 kg with height 157 cm, and her BMI was 35.9 kg/m2. Her abdominal examination was normal. She had normal vulva and urethra. The hymen was intact and there was no apparent protruding lesion. The laboratory tests revealed a normal white blood cell count and hemoglobin of 6.6g/dl. The patient had received blood transfusion and her post-operative hemoglobin has become 11 g/dl on the following day. An abdominal ultrasonography revealed a normal looking uterus, with a hyper echoic structure in the cervix measuring 28x12 mm with normal bilateral ovaries except for multiple follicles (Figure 1).

The patient was informed about the findings and was consented for hysteroscopy cervical polypectomy along with the risks, benefits and alternatives. Under general anesthesia, a 3.5 mm bipolar hysteroscopy, Versascope (Gynecare, Ethicon, U.S.A.), was introduced into the vagina without a speculum to preserve the integrity of the hymen; saline was used as a distending medium (Figure 2). Hysteroscopy view was identified protruding polyp from the cervix. Hysteroscopy resection of the cervical polyp was performed with the twizzle, which was used to cut through the pedicle of the polyp, and a polyp forceps through the intact hymen (Figure 2) was used to remove the polyp. At the end of the procedure, the hymen was checked and it was intact. Post operatively, the patient went to recovery room in good general stable condition, and upon calling the patient postoperatively, she was doing well and the bleeding has subsided to a minimum. Figure 1: Transabdominal scan showing a mass measuring 2.82*1.26 in the cervix. 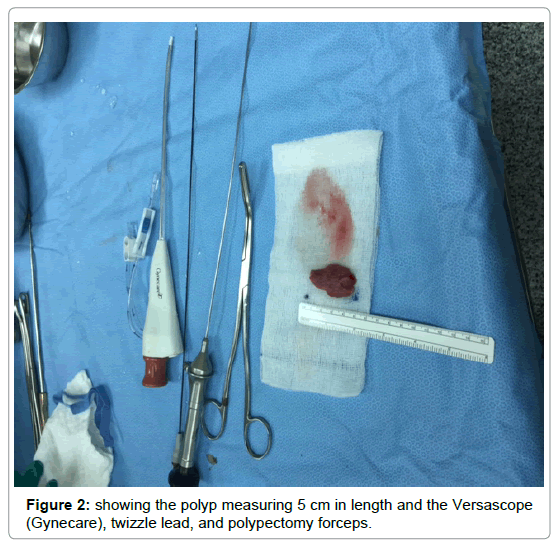 Cervical polyps are common lesions of the cervix and usually occur in fifth decade in multiparous patients [4]. Arising usually from the endocervical canal, cervical polyp may less commonly arise from the ectocervix [6]. Although common, cervical polyps with a diameter more than 4 cm are rare, with only several cases found in the literature [5]. Our patient had a 3cm polyp diagnosed on ultrasound. Cervical polyps are composed of a main glandular component with a fibrous core [4]. Theories suggest that these lesions arise secondary to chronic inflammation or due to an abnormal response to hormones [6]. Yi et al. found heavy expression of estrogen and progesterone receptors on immunohistochemical staining of a giant cervical polyp measuring 12.6*8cm in a 35-year-old patient [4].

Patients are usually asymptomatic, but may complain of abnormal bleeding including intermenstrual and post-coital bleeding, as the case with our patient who came with heavy vaginal bleeding to the emergency room [10]. As giant cervical polyps are rare, their malignant potential has yet to be confirmed [4].

First line investigation for genital tract pathology is the pelvic ultrasound, where cervical polyps are seen as well-defined hyperechoic area [10]. Other investigations include endometrial biopsy, dilatation and curettage, hysteroscopy or magnetic resonance imaging; tailored according to the case [11].

Regarding management of asymptomatic polyps, MacKenzie et al. reviewed 1366 patients with cervical polyps, none were found to have malignant features and 67% were asymptomatic cervical polyps [12]. Thus, patients can be reassured with no intervention unless large polyps hamper cervical smear or are associated with abnormal cytology [1].

In our patient, our goal was to maintain our patient’s virginity. This can prove difficult, as the hymen does not tolerate forceful manipulation [9]. We report this case as our patient and her family where strongly against any surgery that affect the integrity of the hymen. The polyp was causing significant bleeding leading to anemia and thus could not be left untreated. After proper patient counseling, we decided to go ahead with hysteroscopy polypectomy. Risks, benefits, alternatives were discussed with the patient and her brother and the patient had consented for the procedure. We managed to maintain hymen integrity by using a 3.5 mm bipolar hysteroscopy, Versascope (Gynecare, Ethicon, U.S.A) without the use of a speculum. The patient was followed postoperatively, and her vaginal bleeding had subsided to a minimum.

Hysteroscopic resection of a cervical polyp in virgin females is possible with preservation of their hymen and this should be considered as a first option in patients wishing to conserve their virginity.

We would like to thank Dr. Abdulaziz Al-Obaid for referring this patient, Dr. Gamar Salim, Dr. Jawharah Al-Zebeidi and Dr. Hanaa Mubarak for their clinical opinion.