Objective: Vulnerability of healthcare facilities (HCF’s) in Malaysia due to flooding from climate change impacts is understudied. This study aims to identify the flood prone government HCF’s due to climate change.

Methods: Projection of 100-year Return Period riverine flooding at baseline or current condition, 2030 and 2050 was done through hydrodynamic modelling. The location of government HCF’s in terms of longitude, latitude and elevation was determined by using the Geographic Information System and later overlaid with the flood maps produced by the National Hydraulic Research Institute of Malaysia (NAHRIM). Projection of the 15 most vulnerable river basins in Peninsular Malaysia was done based on IPCCC SRES-AR4.

Conclusion: This study enables stakeholders to assess vulnerability of flooding and plan adaptation measures necessary in anticipation of the impact of climate change on riverine flooding in Malaysia.

Malaysia is a country prone to flood risks, mostly by nature of its physical (topography and drainage) as well as its human geography (settlement and land use patterns). The combination of natural (heavy monsoon rainfall, intense convection rain storms) and human factors has produced different types of floods, namely monsoon, flash and tidal [1]. Monsoon and flash floods are the most severe climaterelated natural disasters in Malaysia. The leading cause of floods is heavy rainfall of long duration or of high intensity, creating high runoff in rivers or a build-up of surface water in areas of low relief. Rainfall over long periods may produce a gradual but persistent rise in river levels that in turn causes rivers to inundate surrounding land for days or weeks at a time.

River flow forecasting is an important yet difficult task in the field of hydrology because predicting future events involves a decisionmaking process where the ability to predict future river flow will provide the right edge and assist the engineers in terms of flood control management, and provide some benefits in the areas of water supply management [18-22]. Accurate continuous data collections on the catchment area are needed to produce a good river flow forecast.

There have been many studies on flood vulnerability and threat mapping using Remote Sensing Data and Geographical Information System (GIS) tools [23]. Flood monitoring across the globe has been done extensively by radar remote sensing data [2,24] and several of these studies have applied probabilistic methods [2,25,26]. Various case studies have also applied GIS and neural network methods for flood vulnerability mapping [24,27]. However, studies involving the application of computer based models utilizing risk assessment software for the projection of flood in relation to climate change are still scarce and lacking in Malaysia [28].

Overall this study aimed to identify vulnerability of healthcare facilities to riverine flooding which would assist in further adaptations, for providing continuous healthcare services even during the times of the flood. The findings in this study should be of particular interest to government departments (national and regional) and regulatory and planning authorities, as the findings presented herein should help to improve on the general flood hazard assessment data, and procedures used for emergency health services, planning and infrastructure assessment.

Malaysia is located in South East Asia which lies between the latitude 2º N and 7º N of the equator and longitude 99.5º E and 120º E. It also covers an area of approximately 329,750 km2, comprising of Peninsula Malaysia (West Malaysia) and the states of Sabah and Sarawak (East Malaysia) which is located along the northwest coast of Borneo Island. Malaysia is generally influenced by convective rain and the rainfall distribution is greatly influenced by topography and the monsoon winds [29-35]. There are 191 major river basins in Malaysia, which 144 river basins are prone to flood. In view of the effects of climate change, NAHRIM has conducted detailed studies in the 15 most socio-economically vulnerable river basins in Peninsular Malaysia, namely Muda, Kedah, Kerian, Selangor, Kesang, Muar, Batu Pahat, Johor, Pulai, Skudai, Tebrau, Pahang, Setiu, Dungun and Kelantan River basins (Figure 1). The coordinates of the government Hospitals (H), Primary health clinics (PHC’s) and Community health clinics (CHC’s) were overlaid with the flood extent maps associated with 100-year Return Period for the time horizons of 2030 and 2050 produced by NAHRIM. The National Hydraulic Research Institute of Malaysia (NAHRIM) has conducted comprehensive studies to assess the impact of climate change on the hydrologic conditions of Peninsular Malaysia [33,35] as well as for Sabah and Sarawak [34]. The latest study conducted in 2014 was based on 15 climate projections for the 21st century by 3 different coupled land-atmosphere-ocean Global Climate Models (GCMs), that are ECHAM5 of the Max Planck Institute of Meteorology of Germany, CCSM3 of the National Center for Atmospheric Research (NCAR) of USA, and MRI-CGCM2.3.2 of the Meteorological Research Institute of Japan, based on four different IPCC AR4 greenhouse gas emission scenarios (A1FI, A2, A1B, B1). The climate projections were dynamically downscaled at hourly intervals and a fine 6 km × 6 km spatial resolution by the Regional Hydroclimate Model of Peninsular Malaysia (RegHCM-PM), which is a combination of mesoscale atmospheric model and regional land surface hydrology model that is also able to capture the impact of steep topography on local climatic conditions [35].

Ensemble average of the 15 scenarios of bias-corrected downscaled future rainfall was utilized for design flood modelling simulations. The current (baseline) and future flood assessments were carried out based on 100-year Return Period for the current and future time horizons of 2030 and 2050. The 100-year Return Period was used in the assessments since it is the adopted standard design protection level mandatory for all the major water-related infrastructures in the country.

The flood modelling for the 15 river basins was carried out by combination of projected river reaches flow data generated from NAHRIM Watershed Environmental Hydrology (N-WEHY) Model and 2D-hydrodynamic flood modelling data using US Army Corps of Engineer, Hydrologic Engineering Centre’s River Analysis System (HEC-RAS). Figure 2 summarizes the workflow of the flood modelling process by NAHRIM that comprises of four (4) main activities which are downscaled climate change projections and scenarios, preparation of model input, flood modelling and generation of flood maps, and vulnerability assessment of the healthcare facilities carried out by IMR in this study. 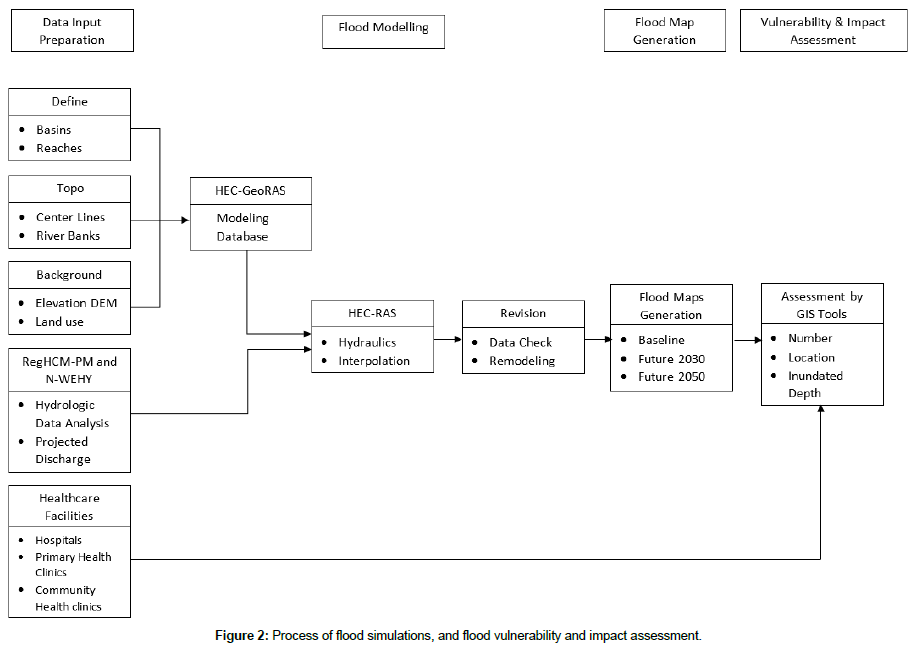 The results of generated future flood maps from the hydrodynamic models in Geographic Information System (GIS) format. This data was then applied to prepare inputs to Aeronautical Reconnaissance Coverage View (ArcView), Version 3.2 which was used for visualisation. All outputs were transferred into ArcView and a flood project file (FLOOD.APR) was created for easy query, visualisation and mapping for the end user and research outcomes. The healthcare facilities reported in this study were all government healthcare facilities registered as of the year 2015.

2D flood inundation and extent maps for the 15 river basins were produced based on current condition (baseline) and future climate condition for 2030 and 2050 by NAHRIM. In general, increasing trends of flood magnitudes and inundated areas are simulated in the future compared to current design floods. The total flood areal extent in these 15 basins are most likely to increase from the current 3,918 km2 (6% of total basin area) to 6,007 km2 (9.1%) and 6,210 km2 (9.4%) in the periods of 2030 and 2050, respectively. However, potential flooding in certain areas within 15 river basins are identified to be more severe in 2030 and 2050. The healthcare facilities around Muda, Kedah, Kelantan, Pahang, Muar and Batu Pahat river basins were more vulnerable to potential flooding as shown in Tables 1 and 2.

Table 2: Summary of Healthcare facilities affected by Projected Flooding and Inundation in 15 Vulnerable River Basins studied by NAHRIM and IMR based on water depth levels at Baseline, 2030 and 2050.

This information should be utilized to manage flood warning activities such as voidances and road closures to ensure uninterrupted health services even during floods and as adaptation plan for flood damage control.

Many healthcare facilities have not been designed with extreme weather events like riverine flooding in consideration. This is especially the case with facilities which are situated in areas where the weather was moderate prior to anthropogenic climate change and the resulting phenomena such as floods, heavy storms, landslides and mudslides occur due to reasons such as land use. New healthcare facilities will need to be designed and sited accordingly. Modifications may need to be made to existing facilities and their environments as well as innovative healthcare facilities to deal with extreme weather events such as flooding. Nowadays, potential flood damage is generally assessed using flood simulation models. Even though developments in the field of computer science have enabled the generation and application of high-resolution flood prediction models, difficulties still remain in recreating actual extreme flood events, which in turn has a direct impact on model predictions of flood elevations, inundation extent and hazard risk.

However early warning systems have been developed in many areas to prevent negative health impacts through alerting public health authorities and the general public about climate-related health risks. Besides that, in order to ensure uninterrupted health services in Malaysia, current resources have been upgraded and able to hold essential utilities and resources (medical gases, Liquefied petroleum gas, food, water supply and electricity) up to 3-5 days in health clinics and 2 weeks in hospitals. Health services are also provided at relief centres. Basic medical treatments as well as prevention of communicable diseases are provided at relief centres. At relief centres with more than 1000 evacuees, 24 hours static medical services are provided. Registries and early evacuation plans to designated health facilities are in place, established specifically for the less resilient groups.

There is also capacity building for crisis preparedness and disaster management during flood which is enhanced by technical training of staff in terms of survival training and flood simulation exercises. Post disaster psycho-social support services are also enhanced to minimize the impact of disasters on the affected communities and healthcare workers. Furthermore, flood adaptation programmes and strengthening of disaster risk management and resilience of infrastructure would be further enhanced in the Eleventh Malaysia Plan and beyond.

Results of this study were reported by the Institute for Medical Research (IMR), Ministry of Health, in Malaysia’s commitment to Vulnerability and Adaptation Assessment for the Third National Communication to United Nations Framework Convention from Climate Change (UNFCCC) and Second Biennial Update Reporting for flood vulnerability impact assessment.

We would like to thank the Ministry of Health (MOH) of Malaysia through the Director-General of Health Malaysia, Deputy Director General of Health (Research & Technical Support) and the Director of Institute for Medical Research for ensuring the availability of the healthcare facilities data for use in this study. We also would like to thank NAHRIM for the development of the projected riverine flood inundation and extent map and compiling the data as well as all MOH staff and officers who were involved in this study. This study was approved by the National Institutes of Health, Ministry of Health, Malaysia for publication with NMRR ID: NMRR-16-1422-31929 (Project Code: NIH/IMR16- 051). This project was initiated under the Malaysia 3rd National Communication (NC3)-Vulnerability and Adaptation Working Group (VA).

The authors have declared that no competing interests exist. 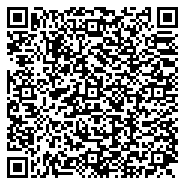