Relationship between BMI and Periodontal Diseases

Background: Periodontal disease is a slowly progressing condition that affects the supporting structures of a tooth results in tooth loss. Epidemiological studies estimate that over 4 million Americans over 45 years of age suffer from this disease. Obesity consider dangerous for stable conditions of people health. Recent studies have reported a relationship between obesity and periodontitis, but no study has performed among Saudi population.

Objectives: The aim of this study was to explore the relatio ship of periodontal diseases with body mass index (BMI) among the patients. Subjects: Twenty (20) overweight /obese [obisty (BMI) ≥ 25.0 kg/ m2] participants and 20 healthy (BMI <25.0 kg/m2) cases as controls.

Methods: A prospective cross-sectional (case-control) study has been conducted by the Division of Periodontics, Department of Preventive Dental Science (PDS), College of Dentistry, KKU, (KSA). Patients attending the OPC of College of Dentistry, KKU, Abha, KSA was the source of data. Participant’s clinical periodontal
comprehensive examination. Duration: The duration of this project was 2 months while started.

Periodontal is a multifactorial (local, environmental and genetic factors related) disease of the tooth structures. It is highly prevalent, affecting 10%-15% of the population, is considered as the most common cause of tooth loss among adults [1]. Plaque-induced periodontal diseases have traditionally been divided into two general categories based on whether attachment loss has occurred: i) gingivitis and ii) periodontitis. Gingivitis is the inflammation without loss of connective tissue attachment [2,3]. Periodontitis can be defined as gingival inflammation at sites where there has been a pathological detachment of collagen fibers from cementum and the junctional epithelium has migrated apically. In addition, inflammatory events associated with connective tissue attachment loss also lead to the resorption of coronal portions of tooth-supporting alveolar bone [2,3]. Physicians are concerned about the high rates of tooth loss and periodontal disease because these oral conditions are associated with significant negative health outcomes. Periodontal diseases have potential effects on a wide range of organ systems, eg: cardiovascular disease (CVD)s, stroke, rheumatoid arthritis (RA), diabetes Mellitus, preeclampsia and preterm labour /low birth-weight baby, chronic obstructive pulmonary disease, acute respiratory infections and even on chronic renal disease [4-16].

Overweight and obesity is one of today’s most common diseases. Overweight and obesity are a global epidemic, with 1 billion overweight people, of whom 300 million are obese, and at least 2.6 million die each year as a result of being overweight or obese [17,18]. Obesity is common in highly industrialized societies where there is a sedentary lifestyle with minimal dependence on exercise. A typical example could be the Saudi society. Some alarming statistics quoted in leading publications stated that about 66% Saudi women are overweight. Approximately 52% of the adult population in Saudi Arabia is obese while among adolescents it is 18%. Over 15% of pre-school children are also victims of obesity.

The above results referred to might, therefore, being related to both genetic and environmental factors such as over nutrition. According to this hypothesis, the authors felt it important to investigate the relationship between BMI and periodontal diseases in a Saudi Arabian community, that is, in a relatively stable ethnic group. The aim of this study was to raise the General Practitioner’s awareness when treating overweight /obese individuals.

In this study, random data was recorded from the patients attending the OPC, College of Dentistry, KKU where periodontal diseases were indexed after Loe H: J Periodontol (suppl) and modified from Russell AL: J Dent Res [19].

Periodontal parameters will be recorded

• Subjects unable or unwilling to complete the trial.

• Lack of linguistic skills or psychiatric disorders or decline to sign the informed consent.

Overweight is defined as a body mass index (BMI) ≥ 25.0 kg/m2. BMI or Quetelet index is a method of estimating a person’s body fat levels based upon a person’s weight and height measurements. While the BMI calculation is an indirect measurement, it has been found to be a fairly reliable indicator of body fat measures in most people [20].

For adults, BMI results are interpreted as follows [19]. 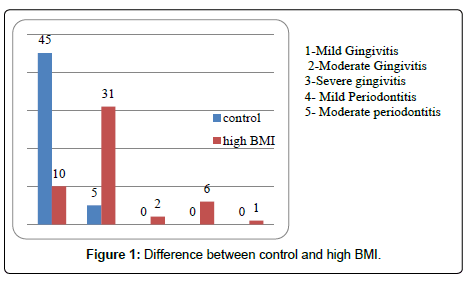 Obesity is risk factor of chronic diseases, such as coronary heart disease, stroke, adverse pregnancy outcomes, diabetes, and mortality; however it has not been until recently that an increased weight (BMI) was also related to dental health, especially periodontitis. It has been suggested that obesity is related to the occurrence of periodontal disease. Cross-sectional studies have reported the association between obesity and periodontal diseases. Wood et al. as well as with periodontitis Al-Zahrani et al. Dalla Vecchia et al., Genco et al., Saito et al., Ekuni et al., Khader et al., Kongstad et al. and gingivitis. It has also been reported that obesity is related to the presence of risk factors for periodontal disease, such as biofilm and dental calculus Franchini et al. Pischon et al. suggested that the secretion of inflammatory cytokines by adipose tissue could be triggered by lipopolysaccharide of gram-negative periodontal bacteria, leading to hepatic dyslipidemia and reduction in insulin sensitivity [7,22-30]. This reaction would be enhanced in individuals with higher amounts of adipose tissue and would exacerbate the systemic inflammatory condition predisposing to the establishment or aggravation of inflammatory diseases such as periodontitis. A study by Eduardo Dickie de Castilhos stated that systemic inflammation and oral hygiene may be mediating the association between obesity and gingivitis. Obesity was not associated with periodontal pockets in young adults in this cohort. Another study by Benguigui proved that plaque index, reflecting dental plaque, and PD, closely linked with periodontal inflammation and infection, are statistically associated with high BMI and obesity, independently of dietary patterns and insulin resistance. More caries and gingival inflammation were observed in adolescents with obesity as stated by Fadel. According to Prpic persons with an increased BMI had slightly worse dental health, as represented by higher dental index, regardless of their tooth brushing routines, and lower levels of education. The results of our study also found a correlation between obesity and Periodontal diseases.