Study of the Influence of Modification by Nanocompositions both on the Process of Crystallization and on the Structure of Aluminum Alloy AlSi7Mg | SciTechnol
All submissions of the EM system will be redirected to Online Manuscript Submission System. Authors are requested to submit articles directly to Online Manuscript Submission System of respective journal.

Citation: Kuzmanov P, Velikov А, Dimitrova R, Cherepanov A, Manolov V (2019) Study of the Influence of Modification by Nanocompositions both on the Process of Crystallization and on the Structure of Aluminum Alloy AlSi7Mg. J Nanomater Mol Nanotechnol 8:3.

A study of the cast alloy A356, modified by various types of nanoparticles has been carried out. SiC, AlN, TiN, clad by Cu, Ag and Al have been used. The cladding has been done by the following methods: currentless chemical method, extrusion of a composite rod, tableting and mechanical-chemical treatment in a planetary mill. The obtained nanocompositions (NCs) have been introduced into the crucible of the furnace. Homogenization has been conducted after that by using an impeller. The samples have been cast in thin-walled steel containers. The non-stationary temperature has been measured during cooling and crystallization. Data about the dependencies of the temperature on time have been obtained and the magnitude of overcooling for the cases with and without NCs has been determined. It has been established for the samples with NCs, decreasing of the overcooling and grain refinement, with an average diameter of the α-grains decreasing from 21% to 60%. For the sample, modified by NC, SDAS (Secondary Dendrite Arms Spacing) decreases by about 14%, while the micro-hardness increases by 7.7%, compared to the unmodified sample. These studies reveal new information about the influence of the NCs on the process of crystallization of ?356 alloy.

The combination of thermal and structural research allows for an overall study of the interaction between various types of NCs and casting of an aluminum alloy, on the one hand, as well as of the process of crystallization of the alloy in their presence. Paper [1] considers the results from thermal and metallographic analyses of AlSi7Mg alloy before and after modifying it by two types of nanopowders (NPs)- nanodiamond (ND)+Ag (0.1 wt) and TiN+Al (0.03%-0.3 wt%). By means of the thermal analysis, the temperature changes during the different stages of crystallization and the values and the duration of overcooling in the result of the modification have been registered. The metallographic analysis has established that the modification by NCs leads to a significant presence of small-sized α-grains with cellular structure and to grain refinement of the silicon and intermetallic crystals. The average grain diameter decreases by 26%-28%, DAS values-up to 13%, while the micro-hardness increases by up to 15%. The influence of the cooling rate on both the process of solidification and on the properties of AlSi and AlMg alloys has been studied in [2]. From the cooling curves, obtained by means of an especially developed and constructed equipment, the cooling rate and the solid phase content in the biphasic zone for the different types of alloys have been defined, whereas improvement of the microstructure has been observed at high cooling rates. Paper [3] studies by thermal analysis the effect of the different amount of the classical modifier Al-5Ti-1B on both macro-and microstructure characteristics and the characteristic parameters of the cooling curve of aluminum alloy 319. Acceleration of the crystallization as a result of the introduction of the modifier has been observed and it has been established that the parameters of the process of solidification depend on the grain refinement. The influence of 0,2 wt% Ti and 0,03 wt% Sr on the temperature curves of cooling, as well as on the macro-and micro-structure of alloy А356 has been discussed in [4]. Changes in the character of the curves have been observed alongside macro-grains refinement as a result of introducing the additive.

The present paper describes a methodology, developed by the research team, together with a constructed experimental equipment for casting and thermal analysis of small samples of AlSi7Mg, modified by NCs. The way in which modification by nanoparticles influences both the parameters of the crystallization process and the structure of the alloy has been established.

Casting alloy AlSi7Mg with the following composition: 6.65 wt% Si; 0.49 wt% Fe; 0.05 wt% Cu; 0,28 wt% Mg; 0.07 wt% Zn, determined by spectral analysis, was modified by NCs, based on nanopowders (NPs): SiC, TiN, TiCN and AlN. The metal cladding was carried out to improve the wetting of the nanoparticles by the metal melt. Different methods of cladding were applied.

By the method of mechanical-chemical treatment of the NPs in a planetary mill [5], the first type of NCs: 1 part TiN+1,5 parts Cu was obtained. For this purpose, the nanosized powder was mixed with micronized Cu particles. Thus, the metallization of the nanoparticle surface was accomplished.

Cladding by a currentless chemical method was used for obtaining the second type of NCs: SiC+Cu and SiC+Ag [6].

NC, made of: 4 parts AlN+1 part Cu+12 parts Al was obtained by the method of extrusion, developed by the authors. In this case, a mixture of nanoparticles and micronized aluminum and copper particles were homogenized, and then placed in a thin-walled container, made of pure aluminum, and extruded through a suitable nozzle.

By pressing a mixture of nanoparticles together with micronized Al particles briquettes of NC were obtained in a ratio of 1part SiC+4 parts Al.

A stainless steel thin-walled mould, equipped with an axial fast-acting mantle thermocouple TCMI-K1x100G+3 m 800°C with hot solder SS316-type K, outer diameter of the working part 1 mm and length-100 mm (Figure 1a), was designed to cast the samples (Figure 1b). The thermocouple was placed in a thin-walled steel tube to protect it from the influence of the aluminum melt. The whole process was recorded by using a two-channel fast-running USB FLASH ARCHIVER MS DL-F2 v-2.0 produced by the Bulgarian company Mycrosist and enabling information at a time interval of 0.2 seconds about the temperature of the sample as a function of time. The melting of the aluminum alloy AlSi7Mg was carried out in an 11 kW electric resistance furnace, having a crucible with 1.0 kg capacity, mounted in it. The sequence of the experimental steps was as follows: 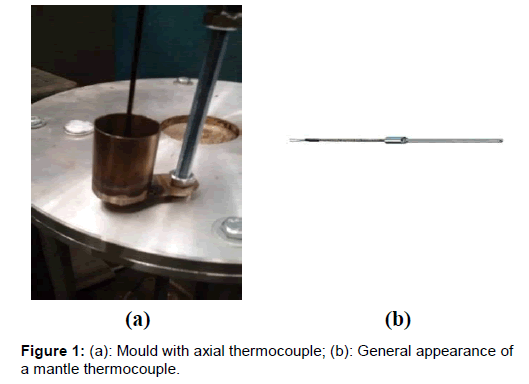 Figure 1: (а): Mould with axial thermocouple; (b): General appearance of a mantle thermocouple.

1. Degassing the melt at 730-740°C for 1 to 3 minutes by introducing a "Degasser" tablet, produced by "SM Region". A degassing method by purging with argon was also used

2. Packing the NC in an aluminum container; attaching it to the impeller; and introducing the impeller into the melt

3. Mechanical stirring for 3-5 minutes to melt the container and homogenize the melt at a rotational speed of about 150 revolutions per minute and melt temperature of 720-740°C

4. Immersing the mould into the melt, filling it, removing it from the furnace and fixing it by a stand until the melt is completely crystallized

A moment from the process of homogenization is shown in (Figure 2a). The temperature of the melt decreases in result of the homogenization and this imposes that reheating is carried out to reach the casting temperature of 720°C. The casting of a sample is done by immersing the mould and scooping up melt from the crucible. All experiments were conducted at close temperatures of the melt. For observing these conditions the melt temperature was continuously controlled by a corundum-protected thermocouple, dipped in the crucible (Figure 2b), the signal of which was visualized on the screen of the archiver. The mould, filled with crystallized alloy AlSi7Mg is shown in Figure 2c.

Figure 2: (a): Homogenization of the melt; (b): Taking a sample; (c): A cast sample together with the mould.

For capturing and analyzing the macrostructure the samples were prepared according to a standard procedure ground by sandpaper numbers 120, 220, 400 and 600, and etched with a Poulton reagent. The macro-samples were photographed, using a Canon Power Shot G7 digital camera, together with part of a measurement line for scaling and quantitative analysis. The quantitative analysis was done using a licensed image analysis software Olympus Micro Image. The average diameter values of the macro-grains were defined (average diameter-the average length of the diameters, measured at 2-degree intervals and going through the center of the object).

The results about the average diameter of the macro-grains, obtained during the conducted quantitative analysis of AlSi7Mg alloy samples made of AlSi7Mg alloy are given in Table 2. Sample S2-1 is taken as a base for calculating the percentage change of the average diameters in Dave. It can be seen that the average diameter of the macro-grains for all modified samples decreases between 21% and 60% in comparison with the unmodified samples, which proves the repeatability of the effect of nanomodification. The largest grain refinement of the structure, from 49.6% to 60.4%, was obtained with the S6N-1, S7N-1 and S8N-1 samples modified by NCs, containing correspondingly TiN, SiC and TiCN. This gives reasons to consider that the NPs, specified here, are the strongest refiners of the AlSi7Mg alloy macrostructure.

Table 2: Results about the average grain diameter in samples of AlSi7Mg alloy.

The modifying effect of NC: 1part TiCN+2 parts Ti, on the microstructure of the AlSi7Mg alloy was studied as well. Micro sections were prepared from the samples S2-1 and S8N-1. Their microstructure was photographed at a magnification of х50 (3 fields for computing SDAS) and of х200-for qualitative assessment of the eutectic. The micro-images are shown in Figure 4.

Table 3 gives the result of SDAS and the micro-hardness of the same samples. It can be seen that for the modified by NC sample SDAS decreases by about 14%, while the micro-hardness increases by 7.7% in comparison to the unmodified sample. The type of eutectic stays the same (Figure 5b and 5d).

Table 3: Results about SDAS and the micro-hardness.

Studies of modification of aluminum alloy AlSi7Mg by different (both by composition and by the method of the cladding of the powders) NCs have been carried out. The used NCs are: (1 part TiCN+2 parts Ti); (1 part TiN+1,5 parts Cu); (SiC+Cu); (SiC+Ag); (4 parts AlN+1 part Cu+12 parts Al); (4 parts SiC+1 part Cu+12 parts Al) and (1 part SiC+4 parts Al). It was established for the samples with NC, in comparison to the ones, without NC, that the overcooling decreases both at liquidus and eutectic, grains refine, SDAS decreases, and micro-hardness increases.