The Inter-Relationship between Periodontal Disease and Diabetes Mellitus: A Review and Four Case Reports

Periodontitis causes destruction of tooth attachment to bone and may predispose to systemic disease which can precipitate accelerated periodontal destruction and tooth-loss [1-3].

INEGI reports diabetes mellitus as the leader (15%) of cause-related deaths in Mexico. The National Institute of Public Health indicates 14% of adult Mexicans are diabetic and in over 60 years old, the prevalence is 30% [6].

Gingivae of untreated diabetics become erythematous and edematous; some may be hypertrophied, typically with pain and suppuration oozing from gingival margins and inter-dental papillae [10]. This association in poorly controlled diabetics with increased gingivitis and bleeding is described frequently [11].

Aggressive gingivitis can progress to periodontal disease; this progression becomes problematic in diabetics, because of the faster progress, greater severity and higher prevalence of periodontal destruction when compared to non-diabetic patients. Periodontal disease compromises optimal mastication and this may leads to inadequate diets. A periodontal infection can affect the metabolic control of diabetes [12].

The DMPD has many moderating and confounding influences at work. For example: poor metabolic control of glycemia; age; longer times of developing diabetes; later complications,[including increased antigenic action of glutamic acid decarboxylase, and increased production of IgG against Porphyromonas gingivalis; and increased levels of metalloproteinase in saliva, have all been putatively implicated and indicated in refractory and/or advanced periodontitis in diabetic patients [10].

The increased frequency of periodontitis in diabetics remains obscure but some patho-physiological changes are known.

Microvascular changes occur in gingivae and alveolar mucosa of diabetics, are similar to those in other organs and tissues [9]. The fundamental structural change of small vessels is thickening of the basement membrane, characterized by accumulation of fibrillar material with collagen fibers. These changes include: the basement membranes of capillaries, narrowing of lumens and peri-endothelial thickening, accompanied by stasis in the microcirculation. With hyperglycemia basal membrane proteins of blood vessels don’t carry out enzymatic glycosylation; this causes physical changes that alter the structure, composition and permeability of the membranes. These alterations all influence the severity of periodontitis in diabetics, because they would render poor diffusion of oxygen, with inadequate elimination of metabolic waste, decrease leukocyte migration and cause poor diffusion of humoral factors [10].

Alterations in the oral microflora

Oral microflora is altered in diabetes mellitus. The predominant microorganisms vary from one study to another: gram-negative bacteria in general, Staphylococcus, fundamentally epidermidis, Capnocytophaga and anaerobic vibrios, A. actinomycetemcomitans and pigmented bacteroides, Prevotella intermedia , also P.gingivalis and W.recta [7].

Bacterial infection in diabetic patients may be contributed by a defect in the function of polymorphonuclear cells. A decrease in chemotaxis, adherence and phagocytosis in the peripheral leukocytes [13]. Despite this, the origin of the polymorphonuclear functional deficit is still unclear.

Also the cellular immunity can in some cases influence the pathogenesis of the disease since in some cases it has a protective effect and in other cases an aggressive effect. In some studies, no significant differences have been seen in the function of the T. lymphocytes of patients with periodontitis. The determination of the precise role of the T-cell in periodontitis,at the present time, is difficult. It is therefore very important to examine the phenotype, cytokine production, and function of the T-cells.

It is possible that the mix of naive, activated, and memory T-cells, as well as the presence of Th-0, Th-1, andTh-2 cells, represents different phases of the disease. Since early "naive" T-cells are predominantly Th-0, the presence of these cells may indicate an early stage of the disease. Once the micro-flora associated with periodontitis is established, the bacteria induce the production of IL-l and activate T-cells to produce IL-2, which is indicative of a Th-1 phenotype. Thus, the early T-cell response would be of the Th-1type. The IL-2 could then activate other T-cells, including more Th-l cells, as well as Th-2 cells. A continued strong Th-l response would maintain anti-bacterial activity and limit the disease process. Enhanced Th-I activity would result in the recruitment of NK cells, killer cells, and CD8+ T-cells to the site, which may limit the disease. The presence of IFN-y and IL-2 messages indeed demonstrates the presence of Th-l cells. In contrast, if a Th-2 response (characterized by IL-4, IL-5, and IL-10 production) predominates, the cellular infiltrate would be characterized by increased B-cell development and increased antibody production. A marked increase in the numbers of plasma cells does indeed suggest enhanced Th-2 activity in the advanced periodontal lesion. Increased anti-bacterial antibody would eliminate bacteria, but if the antibodies produced were either protective for the bacteria or ineffective at eliminating the micro-organisms, the disease may progress. The presence of both Th-1 and Th-2 cells in the periodontal lesion indicates that both cell subsets are important in the disease process. Whether a Th-1 or a Th-2 phenotype predominates could possibly determine the outcome of the disease. Thus, the dichotomy between "protective" and "destructive" antibody production could well be the key in determining whether or not disease ensues [14].

Increased glucose levels and resultant glycogenic end-products may alter the host response against bacterial infection [9]. Advanced glycation end products (AGE) are synthesized via the non-enzymatic glycation and oxidation of proteins, lipids and nucleic acids. The production is particularly enhanced in chronic hyperglycemia, as in diabetes mellitus. The formation of irreversible AGEs affects the tissues by compromising the physiologic and mechanical functions, as a result of defective constitution of the extracellular matrix components. Periodontitis is an inflammatory disease of microbial origin, resulting in devastation of the tooth supporting apparatus. This disease condition has severe implications in subjects with diabetes, since the tooth supporting tissues contain extracellular matrix targeted by AGE [15].

Inflammatory cytokines control the inflammatory process and generally remain in balance, however, in patients with diabetes mellitus, this balance is interrupted and hyperglycemia is associated with the severity of the periodontal condition. An increase in tumor necrosis factor alpha (TNFα) and interleukin 6 (IL 6) has been seen in diabetic patients with periodontitis [16].

4-Abnormal metabolism of collagen: this alteration would contribute to the periodontal disease progression and to the torrid healing of wounds, traits frequently observed in diabetic patients. A lower proliferation and cell growth, as well as a decrease in collagen synthesis by skin fibroblasts under conditions of hyperglycemia [17]. Other changes include: an increased collagenolytic activity of the gingival tissues in the group of diabetic patients, [18] a decrease in the synthesis of collagen by the fibroblasts of the gingiva and periodontal ligament, and an increase in the activity of the gingival collagenase [19,20].

High levels of glucose induce the activation of NF-KB, which in turn induces changes in the expression of periodontal ligament fibroblast genes, favoring neutrophil activation and bone resorption [21].

Case Report:A 65 year old male patient presented: he had been diagnosed diabetes mellitus and hypertension several years ago and has medical treatment for this two diseases.

On examination of oral cavity: he had good opening and had most of his permanent teeth.

Soft Tissues: they are inflamed (gingival margins were bleeding with inflamed inter-dental papillae).

Teeth: The tooth 34 presents a horizontal fracture (Figure 1) and also an adjusted upper fixed prosthesis from tooth 13 to tooth 23 (Figure 2). Tooth # 15 had a vestibular abrasion

Tooth # 16 has a mismatched amalgam

Tooth # 17 had a mismatched amalgam and a gingival recession. 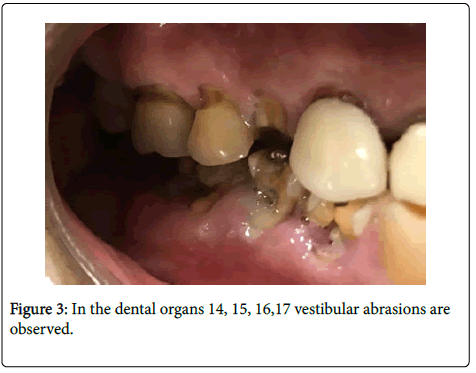 Tooth # 44 had a fracture, a gingival recession and radicular exposure.

In the teeth of the lower arch, the patient presented multiple occlusal wear. In the tooth # 35, 45 and 46 poorly adjusted amalgam, and in the tooth # 36 metal-porcelain crown (Figure 4). Case Report: A 70-year-old female patient presented: she was asymptomatic but after special investigations was diagnosed with diabetes and hypertension. On examination of the oral cavity the following was noted: good opening; she had most of her permanent teeth.

Teeth: She had abundant tartar on the lower teeth even though she performed regular oral hygiene.

She had a noticeable oral malodor that derived from a combination of ketotic pathological halitosis and fetor ex ore (FEO) from her decaying teeth, bleeding gums and poor prosthetic hygiene. She reports she uses her removable partial denture.

Tooth #12 had a vertical fracture at the cervical level.

Tooth # 17 was restored with amalgam. On Radiograph a Periapical area was present, which was not connected to the maxillary sinus. It shows grade I mobility

(#17 either had an amalgam or a crown; was the old amalgam part of the core? This is not clear)

Tooth # 18 had extensive caries which contributed to the FEO (Figure 5). Case Report: A 45-year-old male patient presented with a history of diabetes Mellitus and arterial hypertension in medical treatment.

In oral exploration with dry lips, good opening and he had his permanent teeth.

Soft tissues: the gingival margins were bleeding with inflamed inter-dental papillae. The mucosa, uvula, tongue, cheeks, hard and soft-palate and floor of the mouth were all without pathological change, and within the range of health.

Teeth: Teeth # 11 and # 12 have caries and demineralization in cervical third with vertical fracture.

Tooth # 14 and tooth #15 had endodontic treatment and the roots remain with decay. Figure 6: In teeth 21 and 22 with Three Quarter-Crowns, poorly adjusted.

Tooth # 27 had a poorly adjusted occlusal amalgam with microfiltration.

Tooth # 28 had caries in occlusal.

Tooth # 44 had occlusal caries in the gingival sulcus.

Tooth # 35 and # 36 had a poorly adjusted occlusal amalgam with microfiltration.

Tooth # 38 had an occlusal caries Tooth #45 had a coronary fracture, amalgam with microfiltration

Tooth # 48 had an occlusal caries. On examination of the oral cavity: good opening of the mouth; she had most of her permanent teeth buth the middle line deviated 2.5 mm to the right, does not coincide with her sagittal axis.

Tooth #36 received treatment of the canal with poorly adjusted crown with filtration.

–In Figure 9 and Figure 10 we see upper and lower occlusal view and in Figure 11 and Figure 12- Right and left side. Figure 12: Right and left side photography.

In all patients the treatment of the periodontal disease included special cleaning to remove plaque and tartar deposits on the teeth and root surface.

All patients receive advices about dental brushing techniques and being aware of the condition of their oral health.