3Institute of Bioengineering and Nanotechnology, Singapore

Tuberous sclerosis complex (TSC) and Birt-Hogg-Dubé syndrome (BHDS) act via the mammalian target of rapamycin (mTOR) pathway, resulting in overlapping clinical presentations. We report a patient who presented with features suggestive of BHDS: multiple fibrofolliculomas, a history of spontaneous pneumothorax and a positive family history of a renal condition. Subsequent genetic testing confirmed a Tuberous sclerosis complex 2 (TSC2) gene mutation, corresponding to a diagnosis of TSC. This case highlights how closely intertwined both conditions are, and also confirms that fibrofolliculomas are a feature of TSC.

TSC is an autosomal dominant inherited disorder characterized by the formation of harmatomas involving many organ systems. This condition is due to mutations in either Tuberous sclerosis complex 1 (TSC1 ) gene on chromosome 9, or TSC2 gene on chromosome 16 [1]. TSC has many overlapping features with BHDS, a rare autosomal dominant disease characterised by fibrofolliculomas, spontaneous pneumothoraces and renal tumours, and is secondary to mutations in the folliculin (FLCN ) gene [2]. The phenotypic similarities may be explained at a molecular level, as both diseases act on the mammalian target of rapamycin (mTOR) pathway [3-5]. We report a patient with TSC who presented with clinical features suggestive BHDS.

A 35 year-old Chinese male with a history of multiple skin lumps on his face and upper limbs over a period of 4-5 months is presented. They were asymptomatic, and were gradually increasing in size. He had no past medical history apart from an episode of spontaneous pneumothorax five years ago. His father passed away from an unknown renal condition. On examination, there were 2 nodules over his right elbow, one nodule over his left elbow and other nodule under his right jawline, all hyper pigmented with central umbilication (Figure 1). The rest of the physical examination was normal. In view of the cutaneous findings suggestive of multiple fibrofolliculomas, as well as his personal history of spontaneous pneumothorax and family history of a renal condition, a possible diagnosis of BHDS was suspected. Biopsies over the right elbow and right jawline revealed a keratinfilled follicular cyst surrounded by a fibroblastic proliferation with increased dermal mucin, consistent with a follicular harmatoma (Figure 2a and Figure 2b). Magnetic Resonance Imaging (MRI) of the abdomen showed a 1.9 cm lesion at the periphery of segment 8 of the liver, suggestive of a liver harmatoma (Figure 3a). There were no renal masses or cysts seen. Computed Tomography (CT) of the chest revealed innumerable lung cysts of varying sizes surrounded by normal lung parenchyma throughout both lungs, and also sub pleural bullae in the upper lobes (Figure 3b), consistent with either lymphangiomyomatosis (LAM) seen in TSC, or with BHDS. Transthoracic echocardiography was normal, with no cardiac rhabdomyoma detected. Reverse primer Sanger sequencing confirmed a TSC2 germline mutation (Figure 4a and Figure 4b), corresponding to a diagnosis of TSC. There was no mutation in the FLCN gene. Figure 3: a) Magnetic resonance imaging of the abdomen shows a faint enhancing lesion in segment 8 of liver suggestive of a liver harmatoma. b) Computed tomography of the chest shows multiple lung cysts seen in right lung field. Although vastly different at a genetic level, both TSC and BHDS share clinical similarities. Both conditions are characterized by an increased incidence of spontaneous pneumothoraces secondary to the presence of lung cysts, and also a higher risk of renal tumourigenesis [1,2] There is also an overlap of cutaneous features, as patients commonly develop cutaneous harmatomas, manifesting as small, firm, dome-shaped facial papules. While fibrofolliculomas are typically seen in BHDS, and angiofibromas in TSC, both conditions appear to lie on the same clinical spectrum. This is supported by previous reports of angiofibromas occurring in patients with BHDS [3,4] and also a patient with TSC who presented with a fibrofolliculomas [5].

The clinical similarities in TSC and BHDS are explainable at a molecular level, as the protein products of FLCN and TSC genes have overlapping roles in the mTOR pathway. The mTOR pathway is an intracellular signaling pathway important in regulating cell cycle progression and metabolism, and its dysregulation is associated with the development of cancer [6]. In TSC, the mutated TSC1 or TSC2 genes result in the production of defective forms of hamartin and tuberin, respectively. The impaired hamartintuberin complex is unable to perform its normal function of inhibiting cell signaling mediated by mTOR, which leads to an increase in mTOR activity [1]. This upregulation of the mTOR pathway is also seen in BHDS, where the mutation in FLCN results in the formation of a defective form of its protein product, folliculin. In a normal individual, folliculin forms a complex with folliculin-interacting protein 1 (FNIP1) and folliculin-interacting protein 2 (FNIP2), which in turn interacts with 5'-AMP-activated protein kinase (AMPK), a negative regulator of the mTOR pathway. In patients with BHDS, this negative regulatory mechanism is impaired (Figure 5) [2]. 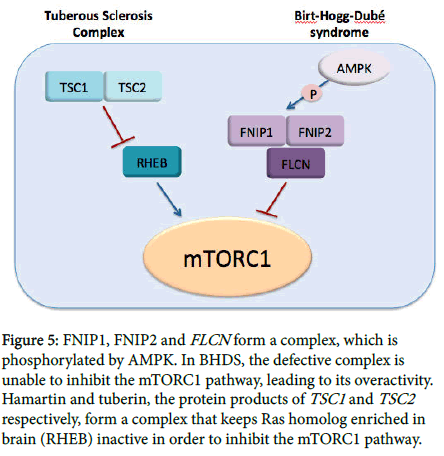 This case illustrates the clinical similarities between TSC and BHDS, which is explainable by the gene products of both diseases having overlapping roles on the same molecular pathway. Whether there are any direct interactions between the folliculin and TSC proteins still remains unknown. In addition, this is the second report in the existing literature of a patient with TSC presenting with fibrofolliculomas, hence lending further support that this is a cutaneous feature of not only BHDS, but also of TSC. Lastly, we hope to raise cognizance to physicians on the need to consider the alternative diagnosis in a patient presenting with clinically equivocal features suggestive of either TSC or BHDS. Clinicians should also to have a low threshold for performing genetic testing to differentiate between both diagnoses.