Study background: Isodicentric X chromosome is a rare structural abnormality in which the arms of the chromosome are mirror images of each other with two centromeres. Little description is available about characterization or phenotype-genotype association in isodicentric Xq28. While some of the females are normal, most only present premature ovarian failure or amenorrhea, but mental retardation is not usually reported.

Methods: We present a study of cytogenetic and molecular characterization of an isodicentric Xq28 found in a development retarded girl with dysmorphic features. G and C banding, CGH array and Bisulfite Methylation techniques were used.

Results: The study showed an almost total trisomy of X chromosome (Xper->Xq28) with a 1.10 Mb deletion in Xq28:qter, with two centromeres and a total skewed inactivation of one X chromosome. The deletion in Xq28 in this patient includes genes that are implicated in X-linked mental retardation and autism spectrum disorder.

Conclusion: Molecular studies help to elucidate genes that are implicated to understand the phenotype. The mental retardation and dysmorphic features in our patient can be attributed to the affected genes, their regulation and tissue expression. Although mental retardation is not usually reported this possibility has to be taken into account inorder to suggest a genetic counselling in prenatal diagnosis and de novo findings. Literature on isodicentric X chromosomes with various breakpoints on Xq is reviewed and summarized in this report.

An isodicentric X chromosome (idic(X)), consists of duplicated portions of a single X chromosome with symmetrical banding patterns on opposite sides of the breakpoint and two centromeres [1]. Many mechanisms have been suggested for the formation of isodicentric X, and recently, some authors hypothesized that most idic(X) chromosomes result from non-allelic homologous recombination between palindromic low copy repeats and long interspersed nuclear elements (LINE element) [2].

The signs and symptoms vary based on the size and location of the duplication/deletion, the genes involved and the sex of the affected person. Males with X chromosome rearrangements are more severely affected than females and often show intellectual disability and sexual abnormalities [3]. In females, the phenotype remains unclear, lack of Xp may cause Turner syndrome with short stature due to haplo insufficiency of short stature homeobox-containing gene (SHOX), a gene that is involved in cell growth regulation [4]. Breakpoints distal to Xq25 are not related to any phenotypic anomalies apart from a few cases of secondary amenorrhea or premature menopause [5].

Duplications in Xp are rare, tall stature is described to be due to overexpression of SHOX [6]. However duplications of upstream and downstream of SHOX are also associated to Leri-Weill dyschondrosteosis [7]. Recently, microduplications in SHOX had also been related with neurodevelopment disorders [8].

Rearrangements with deletions in Xq may confer primary or secondary ovarian failure, in part as a result of loss of premature ovarian failure (POF) region of Xq27 associated with this phenotype [9]. Mental retardation is not described in these patients.

The present report describes a cytogenetic and molecular analysis of a dicentric X chromosome consisting two X chromosomes linked by the terminal Xq region. The karyotype was a non mosaic 46,X,idic(X) (q28) which consisted in an almost complete X trisomy with a loss of Xq28 region. The patient was a 9 years old girl referred for mild mental retardation, peculiar phenotype, behavioural disorders and toewalking. The aim of this study was to identify the genetic background of the pathogenic phenotype in our patient and review of literature.

A 9 years old girl was referred to the genetics laboratory to perform a karyotype. There was no family history of mental retardation, dysmorphic features or sexual disgenesis.

On examination she was tall with height 1, 42 cm (p>99), her weight was 42 kg (p>99), she presented bradypsychia and stereotypes, round face with hipertelorism, broad nasal root, thick lips, obesity, and tiptoe walking.

Endocrine and metabolic studies were according to her Tanner stage II. C-Banding confirmed the presence of two centromeres, Ba(OH)2 observations showed one centromere darker than the other (Figure 2). 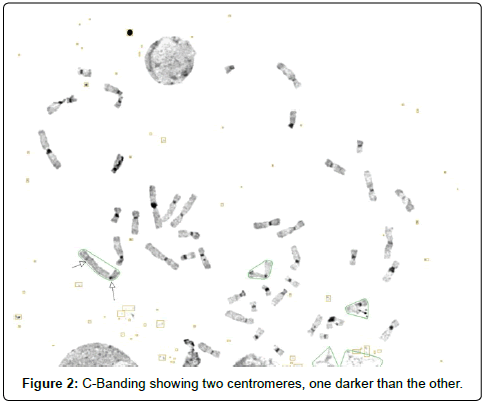 Figure 2: C-Banding showing two centromeres, one darker than the other.

Isodicentric X chromosomes fused by the short arms generally cause gonadal dysgenesis, short stature or Turner stigmata, while those attached by the long arms cause normal or taller than average stature, gonadal disgenesis, amenorrhea, lack sexual development or infertility, but developmental delay is not usually reported [5].

Patients as the one we described idic(X)(q28) are very rare and the phenotype and structure is not well described in the literature. Similar isodicentric was long time ago described with secondary amenorrhea and normal intellectual development [10] while the patient we report showed mild mental retardation and dysmorphic features.

While patients with idic(X)(q28) are described with little sexual development our patient had already presented first sexual development signs at 9 years old. The critical region for gonadal dysgenesis is X, Xq13→q27 is conserved in our patient, and therefore the absence of gonadal disgenesis could be expected. Premature ovarian failure or secondary amenorrhea might appear later as it is described in literature in patients with idic(X)q28 [5].

Most of the i(Xq)s are isodicentric or pseudoisodicentric, because the activity from one of the centromeres is suppressed. The presence of two active centromeres could predispose to a mosaic line with 45,X and Turner stigmata due to the instability in the cellular division. Studies of dicentrics chromosomes provide strong support for epigenetic mechanisms of centromere inactivation that include partial deletions of the alpha satellite array [11]. In plants, smaller centromeres are preferentially inactivated [12]. C-Banding in our patient showed two distantly located centromeres, one centromere darker than the other, which could be indicating that the bigger is the active centromeres, which is consistent with the presence of a single line.

Preferential inactivation of the abnormal X is described in X rearrangement in peripheral blood [13]. However X inactivation in other tissues is difficult to demonstrate and could also play an important role in the clinical expression.

Partial duplications in SHOX gene are described in short, normal or tall stature patients leading to some uncertainty on the effect of SHOX duplication [14]. Duplication in our patient is not only limited to PAR1 but also to almost whole X chromosome. It is more likely that her tall stature is produced by the effect of X trisomy as in triple X syndrome. Microduplications at the SHOX locus are also described as low penetrance risk factor for autism and neurodevelopmental problems [8] as in the case here.

So far, no mental retardation is reported in patients with idic(X) (q28). However, this region is well known for its gene density [15]. Over 40 of approximately 300 X-linked diseases map to this region, molecular studies have led to the identification of causative genes for many diseases [16]. The deletion in Xq28 in this patient includes genes that are implicated in hemophilia, DNA damage response, X-linked mental retardation (RAB39B and CLIC2) and autism spectrum disorder (TMLHE, SPRY3). The highest expression of RAB39B is in neuronal precursors and neurons in the hippocampus. Mutation and deletions in RAB39B are described in patients with intellectual disability, autism and early onset Parkinson disease [17].

X-linked forms of intellectual disability are 3.5 times more common than autosomal forms. X-linked genes are highly expressed in the brain, and the proportion of X-linked genes expressed in the brain is significantly higher than that in other somatic tissues [18]. In females, phenotypic effects differ depending on whether the mutated gene is subjected or not subjected to X control inactivation [19]. Some genes escape X-inactivation and are expressed from both the active and inactive X chromosome, for instance it is unclear whether the phenotypic features of Klinefelter syndrome are caused by altered hormonal dosage or by the increased expression levels of escaped genes.

Short stature is correlated with proximal breakpoints while tall stature phenotype is correlated with distal breakpoint. Gonadal disgenesis, POF, primary or secondary amenorrhea are also common problems of idic(X) when there is a 45,X line mosaicism, but this is not fulfilled in patients with a single line. There is not a specific correlation between breakpoint and all the features described in literature, probably due to the different deleted/duplicated genes, the tissue expression and X inactivation.

Our review concludes that genotype-phenotype correlation in non mosaic cases of idic(X) is more difficult than in those with 45,X line. Molecular studies can help to elucidate which genes are implicated in the rearrangement to try to understand the phenotype. The mental retardation and dysmorphic features in our patient would be produced by the affected genes, their regulation and tissue expression. Although mental retardation is not usually reported this possibility has to be taken into account to suggest a genetic counselling in prenatal diagnosis and de novo findings.

Thanks to Amelia Queipo, Vanesa Barea, Rebeca Moreno and Begoña Rodriguez for technical suport. Thanks to Isabel Lorda for comments that improved the manuscript.