Translationally controlled tumor protein (TCTP) encoded by TPT1 gene is a multifunctional protein involved in fundamental cellular processes of cell-cycle progression, proliferation, survival, malignant transformation, and regulation of pluripotency and cancer stem cells, as well as allergic inflammation. Here we report the cloning of four TCTP-related cDNAs from human peripheral blood mononuclear cells. These genes lack introns, suggesting that they are pseudogenes generated by retrotransposon-mediated integration of TPT1 gene. However, some of them are expressed at extremely low levels in limited tissues and hematopoietic cells. None of the four related proteins is expected to bind IgE, which is required for TCTP’s proallergic reactions. These results collectively suggest that they genes play negligible biologic roles in humans.

The TPT1 gene encoding translationally controlled tumor protein (TCTP) was discovered as a gene highly expressed in tumor cells [1-3]. Despite its name, TCTP expression is subject to both transcriptional and translational control [4-7]. TCTP within a cell plays a critical role in the fundamental processes of cell-cycle progression, proliferation, survival, malignant transformation and regulation of pluripotency [8-10]. TCTP, a Ca2+-binding protein [11-14], is involved in the elongation step of protein synthesis by interacting with both eEF1A (a small GTPase) and eEF1B β (a guanine nucleotide exchange factor) [15-17]. Drosophila TCTP acts as the guanine nucleotide exchange factor for Rheb (Ras homologue enriched in brain), a GTPase of the Ras superfamily that regulates the TSC1-mTOR pathway [18]. Downregulation of TCTP expression induces a reversal of tumor cells into a normal cell phenotype [19,20]. TCTP is an antiapoptotic protein: TCTP interacts with Mcl-1 [21,22] and Bcl-xL [23], anti-apoptotic members of the Bcl-2 family. Recent studies identified mutual antagonism between p53 tumor suppressor and TCTP, with TCTP promoting p53 degradation via MDM2-mediated ubiquitination of p53 and with p53 directly repressing TCTP transcription [24,25]. Another conserved property of TCTP is its interaction with microtubules [26] and mitochondria [27]. TCTP is a microtubule-binding and -stabilizing protein, and its phosphorylation by polo-like kinase decreases the microtubule-stabilizing activity of TCTP and promotes the increase in microtubule dynamics that occurs after metaphase [28]. Probably because of the above-mentioned roles of TCTP in the fundamental cellular processes, TCTP knockout mice are embryonically lethal [29,30].

Despite the lack of a signal sequence, TCTP can be secreted and the secreted protein is also known as histamine-releasing factor (HRF). HRF can stimulate histamine release and IL-4 and IL-13 production from IgE-sensitized basophils and mast cells [31,32]. HRF-like activities were found in bodily fluids during allergic reactions, implicating HRF in allergic diseases [33,34]. We recently found that ~25% of IgE molecules can bind to HRF via their Fab interactions with two binding sites within the HRF molecule, N19 and H3 [35]. The use of peptide inhibitors that block HRF-IgE interactions revealed an essential role for HRF in promoting skin hypersensitivity and airways inflammation [35].

The chromosomal localization of human [36,37] and mouse [38] TPT1 genes has been described. TPT1-derived pseudogenes were found in mouse [38], rabbit and human [39] genomes. In this study, we isolated four TPT1-related transcripts and studied their transcription in various human cell types and tissues.

Candidate human TCTP-related nucleotide sequences were searched in Human genomic plus transcript database with the BLAST algorithm. mRNA expression of the TCTP-related genes was analyzed by RT-PCR and only genes whose mRNA expression was detected were cloned. Human TCTP-related cDNAs were amplified by RTPCR using the primers listed in Table 1 and ligated in pCR-Blunt IITOPO vector (Invitrogen). The cDNA sequences were analyzed using M13 reverse and M13 forward (-20) primers.

Alignments of nucleotide and protein sequences of human TCTPrelated molecules were done by Genetyx software (Version 11). Molecular phylogenetic trees of the TCTP-related nucleotides and proteins were constructed by UPGMA algorithm [40-43].

The human TPT1 gene (NM_003295.2) on chromosome 13q14.13 [37] is the canonical TCTP gene. We have isolated 4 related genes located on different chromosomes by PCR from a cDNA preparation derived from human PBMCs (Figure 1): TCTP2 (XM_001718916.1) on chromosome 9q33.1; TCTP3 (XR_038938.1) on chromosome 6q24.2; TCTP4 (NM_207422.1) chromosome Xq13.1; TCTP5 (AL359851.19) chromosome Xq24-25. These genes are highly homologous to TCTP: TCTP2, 76.2%; TCTP3, 29.1%; TCTP4, 67.2%; TCTP5, 41.9% identical at the amino acid level (Figure 2 and Table 3). TCTP2 lacks the N-terminal 34 residues, but the rest of the amino acid sequence is similar to TCTP except for the replacement of 5 residues. Thus, TCTP2 lacks the IgE-binding N19 region, but has the other HRF-binding H3 domain that is identical to TCTP. TCTP3 is only 55 residues long, corresponding to the TCTP’s N-terminus with 5-residue replacements. Thus, TCTP3 retains the N19 sequence, but lacks the H3 domain. TCTP4 can encode a 140-residue protein with a 5-residue N-terminal extension and the loss of homology after the stretch of the sequence of NYQ. TCTP4 also has 14-residue replacements, including 5 residues in the N19 region, compared with TCTP. TCTP5 is the least homologous member with two internal deletions of four residues corresponding to residues14-17 of TCTP, which is within the N19 region, and one residue corresponding to residue 72 of TCTP and an insertion of 5 nucleotides after the MKS stretch corresponding to residues 96-98 of TCTP, resulting in a frame shift. In addition to these changes, TCTP5 has 22-residue replacements in the 1-98 segment of TCTP. Lacking introns unlike TPT1, they must have been generated by retrotransposon-mediated integration of the TPT1 gene and subsequent mutation during evolution. Processed pseudogenes of TCTP were also found in the rabbit and mouse genomes [6,38]. Pseudogenes are generally considered inactive, but some studies report the transcription of processed pseudogenes [40-42]. This seems to be the case for some rabbit pseudogenes of TPT1 [39]. Therefore, we determined whether these related sequences are expressed in human tissues and cells. All tested human tissues, including brain, heart, lung, liver, spleen, kidney, thymus, blood, tonsil, trachea, pancreas, small intestine, placenta, fetal liver, fetal spleen and fetal thymus, well expressed TCTP mRNA (encoded by TPT1) (Figure 3). However, no tissues expressed TCTP2. TCTP3 was expressed only in lung and thymus. TCTP4 was expressed by brain, lung, liver, spleen,kidney, thymus, placenta, and fetal liver. TCTP5 was expressed by brain, spleen, kidney, thymus, blood, and fetal liver. Interestingly, thymus expressed TCTP3, TCTP4, and TCTP5 at the highest levels among the tested tissues. However, their levels were about one order of magnitude lower or less than that of TCTP. 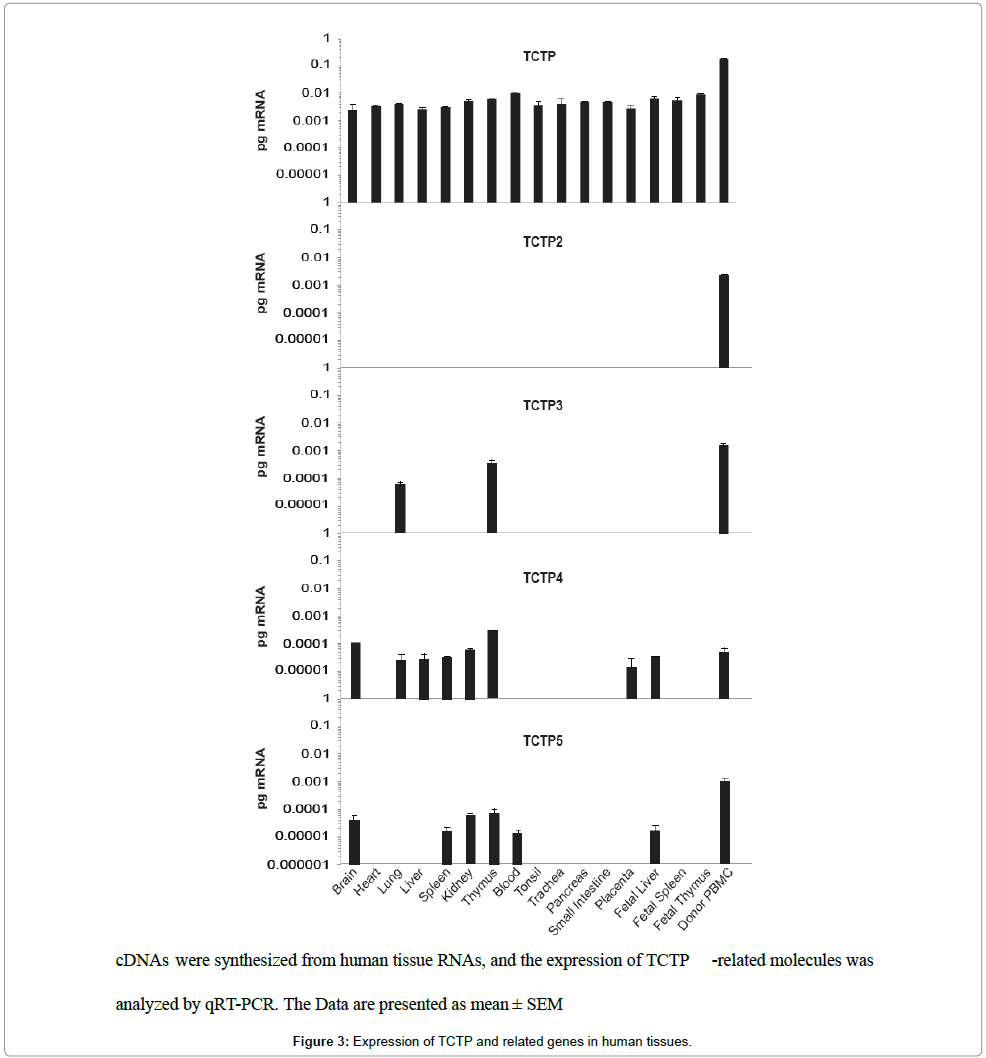 Figure 3: Expression of TCTP and related genes in human tissues.

This study demonstrates that several TCTP-related intronless sequences are present in the human genome. These TCTP-related pseudogenes, particularly TCTP2, are expressed very poorly, i.e., at least 100-fold lower than TCTP, except for TCTP5 in HMC-1 mast cells, which is expressed around one thirtieth of TCTP level. Such a low and limited expression almost guarantees negligible biological importance of these gene products. Given the importance of HRF homodimer, whose disulfide bonding involves Cys172, in activation of mast cells, it is an important observation that the least expressed TCTP2 is only one with an equivalent Cys residue. As inflammations induced by HRF-IgE interactions are suppressed by single HRF inhibitors such as GST-N19 and GST-H3 [35], both IgE-binding sites in N19 and H3 regions are required for HRF’s biologic functions. Among TCTP-related proteins, TCTP4 alone has both N19 and H3 regions. However, TCTP4’s N19 region would not bind IgE, as it has 5-residue replacements. These results collectively suggest that TCTP-related pseudogenes TCTP2-5 do not play significant biologic functions within and outside the cell.

This study was performed mostly at the former Laboratory for Allergic Disease, RIKEN Center for Integrative Medical Sciences, Yokohama 230-0045, Japan. It was supported in part by grants from the US National Institutes of Health (HL124283), the Ministry of Education, Culture, Sports, Science and Technology, Japan (25253071, 15K10794, 25670483), Takeda Science Foundation, and Nipponham Foundation for the Future of Food.