48,XXYY syndrome is a rare sex chromosomal aneuploidy, with a prevalence of 1:18,000 - 1:50,000 males. Despite it being considered as a variant of Klinefelter syndrome, it is now known to be a distinct entity, differing from the latter due to a greater degree of severity and prevalence of psychiatric disorders and mental deficiency. We present the case of a 37-year-old man with psychiatric disease who attended our department due to morbid obesity, identified as a 48,XXYY genotype. Clinical evaluation and cytogenetic analysis is presented.

48,XXYY syndrome is a rare sex chromosomal aneuploidy due to the addition of an extra X and Y chromosome to the 46,XY full-length karyotype. Originally described in 1960 as a variant of Klinefelter syndrome, to which it is phenotypically similar in many respects [1], it is now considered a distinct clinical and genetic entity, differentiating from the former due to a greater intellectual and psychiatric affectation [2]. In newborn screening studies, Klinefelter syndrome (47,XXY) is the most common chromosomal abnormality in human beings, with a prevalence of approximately 1:650 male births [3], whereas the 48,XXYY syndrome has a prevalence of 1:18.000 - 1:50.000 [4].

A 37-year-old caucasian male, the second child born to a nonconsanguineous couple, with a brother with no medical history of interest, was referred from the Department of Psychiatry to our department due to morbid obesity. He had been diagnosed with schizotypal personality disorder, presenting heboid behaviour, as well as episodes of irritability and verbal and physical aggressiveness and a single suicide attempt through the ingestion of an industrial detergent. Among his antecedents, there are also several episodes of alcohol abuse in the past, the presence of enuresis until the age of 15, and onychophagy of the hands and feet. He currently has a sedentary life, with hardly any social relationships and only primary studies. He referred erectile dysfunction and absence of libido.

Among other alterations to be highlighted is a respiratory allergy due to sensitivity to dust mites, as well as a syncopal episode 3 years ago, with loss of consciousness for approximately 10 minutes duration, without loss of sphincter control, not classified as an epileptic crisis.

Physical examination showed a weight of 126 kg and a height of 175 cm, with a body mass index of 41.14 kg/m2. Phenotypically (Figure 1), we observed dental irregularities, prognathism, facial acne, narrow shoulders and broad hips, generalized obesity, and pes planus. He presented eunuchoid habitus, with gynoid distribution of body hair, gynecomastia and microgenitalism, testicular volume of 6 ml measured by orchidometer, and microphallus . Moreover, bilateral symmetrical tremor with a postural and intentional component was observed. Figure 1: Physical features of the patient with 48,XXYY syndrome.

Chromosomal analysis performed with G-banding technique on lymphocytes from a peripheral blood sample, showed the presence of 48, XXYY in all the metaphases studied (Figure 2). 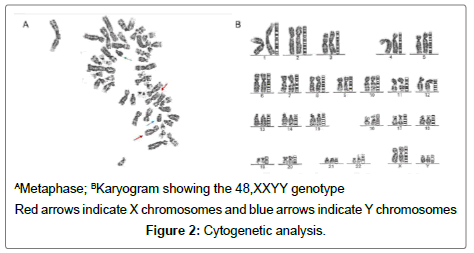 Given these findings, androgenic therapy was started with intramuscular testosterone, which had to be discontinued after several months due to overt hetero-aggressive behaviour.

An electroencephalogram was carried out, in which a wellintegrated tracing and no evaluable abnormalities were observed. Computed axial tomography and magnetic resonance imaging showed a small type I arachnoid cyst on the anterior slope of the left temporal lobe. The electrocardiogram describes sinus bradycardia with no other alterations, and no congenital cardiac defects were observed on the echocardiogram. Polysomnography revealed obstructive sleep apnoea syndrome. On the other hand, there were no renal or other viscera abnormalities in abdominal ultrasound. As for the ophthalmological evaluation, only myopia was observed as a refractive error, with a normal fundoscopic examination.

Bone densitometry was performed by whole-body dual-energy X-ray absorptiometry (DXA), showing a T-score of -1.2 in the lumbar spine, 0.8 in the femoral neck, 0.0 in the hip. Therefore, osteoporosis was discarded.

In the cognitive evaluation tests, using the Wechsler Adult Intelligence Scale (WAIS-IV), he obtained an IQ of 81 (95% CI 76- 88), corresponding to a low performance for the subject’s age. With respect to verbal comprehension, perceptual reasoning, working memory and processing speed indices, he showed a score of 1 SD below the mean, which puts our patient in the range of borderline intellectual functioning/normal range.

48,XXYY syndrome has been identified as a variant of the Klinefelter syndrome due to the fact that they share a similar phenotype. However, because with each additional chromosome there is a greater incidence of physical, structural, and other long-term complications, it is now considered as a distinct clinical syndrome [2].

It is believed that most cases of 48,XXYY syndrome are the result of the fertilization of a normal oocyte with an aneuploid sperm produced through non-disjunction in both meiotic divisions I and II during spermatogenesis [5]. To date, studies of parental origin, performed in diagnosed cases of 48,XXYY have shown that additional X and Y chromosomes have a paternal origin [6], suggesting that the presence of these supernumerary sex chromosomes may lead to alterations in DNA methylation, which leads to altered gene expression and subsequent phenotypic differences.

Our patient was identified carrying the 48,XXYY chromosomopathy at the age of 37, although the vast majority of cases are diagnosed before adulthood. In fact, in the Tartaglia et al. multi-institutional study, over 70% of individuals with XXYY were diagnosed at pediatric age (prior to the age of 10) [7].

Physical characteristics are similar to Klinefelter syndrome, but with more pronounced phenotypic anomalies which vary with age. Hypertelorism, epicanthus, and upslanting palpebral fissures are often the most common features in childhood, although some, such as populated eyebrows and prominent mandible, emerge with age, while clinodactyly, pes planus and dental anomalies are common in all ages. 48,XXYY also affects male sexual development, manifesting microgenitalism, reduced facial and body hair and gynecomastia [6,7].

In addition, hyper gonadotropic hypogonadism involves an alteration of the body composition, as we have seen through DXA in our patient, with abdominal obesity and a predominance of gynoid fat distribution, on long-term this may lead to the onset of metabolic syndrome and peripheral insulin resistance [8].

Other associated features include peripheral vascular disease, deep vein thrombosis, renal anomalies, hypothyroidism, intentional tremor, allergy and asthma [7,9]. In addition, it has been seen that 48,XXYY syndrome has a particularly elevated incidence of non- Hodgkin lymphoma [10].

On the other hand, an increase in the incidence of congenital heart disease (tetralogy of Fallot, pulmonary valve stenosis, mitral valve prolapse, etc.) has been reported [7], but in our patient the cardiological study revealed no abnormalities.

High stature, related to the overexpression of the SHOX gene [11], is one of the most important physical findings in adults with 48,XXYY syndrome. In fact, the mean final adult height in XXYY is slightly taller than in XXY [7]. However, our patient is of normal stature. Therefore, the lack of a high stature should not exclude the diagnosis of 48,XXYY syndrome.

While mental deficiency is rarely is observed in Klinefelter syndrome, a high percentage of subjects with 48,XXYY syndrome have significantly lower IQ and almost all have learning difficulties [9]. This borderline or below normal IQ is justified by the polysomic X and the biased inactivation of the X chromosome. Psychiatric problems, manifested as aggressiveness, impulsivity with significant social difficulties and behavioural deficits, appear to be related to double sex chromosome aneuploidy [12,13]. Aggressive behaviour and an IQ of 81 in our patient, matched up with the psychiatric findings described previously for this syndrome.

Androgen therapy should be considered because, in addition to promoting the development and maintenance of secondary sexual characteristics, improving sexual function, increasing muscle mass and preventing the acquisition of excessively high stature, it also usually significantly improves mental, behavioural and bone health [9,14]. However, for those with significant mental health problems such as bipolar or psychotic disorders, or as in the case of our patient with a personality disorder, testosterone treatment should be initiated slowly with close observation by the mental health team [7]. In fact, this treatment in our case had to be suspended due to overt heteroaggressive behaviour.

In conclusion, for the diagnosis of 48,XXYY syndrome, it is important to perform a correct anamnesis and physical examination, since, as in the case of our patient, certain details may be overlooked, thereby leading to a late diagnosis. In this way, in subjects with mental health problems and the suspicion of a low IQ, as well as microgenitalism and eunuchoid habitus a karyotype should be done, with the objective of accomplishing the early diagnosis of this kind of aneuploidy. This would provide the patient with the necessary support at an early stage. On the other hand, it is necessary to emphasize that not every 48,XXYY subject will present tall stature and, therefore, a normal height should not exclude the diagnosis of this disease. Regarding the evaluation of a patient already diagnosed with XXYY, it is clear that a multidisciplinary approach ought to be employed. First of all, endocrinological assessment must be carried out in order to find hypogonadism, diabetes, obesity, hypothyroidism and osteoporosis. This should be followed by a neurological and psychiatric evaluation. The performance of a brain magnetic resonance imaging, an electroencephalogram and a polysomnography should also be strongly considered depending on clinical symptoms. Other tests such as an echocardiogram for the evaluation of congenital heart defects, a renal ultrasound, or an ophthalmological examination, should also be considered.

Informed consent was obtained from the patient who participated in this study.

The authors have nothing to disclose.