We report an unusual coincidence of two Mendelian disorders in a proband presenting with short stature and café-au-lait spots. Genetic testing yielded both a deletion in the downstream enhancer region of SHOX gene related to Leri–Weill dyschondrosteosis, and Neurofibromin gene truncating mutation resulting in Neurofibromatosis 1 phenotype. Pedigree analysis indicated a crossover in the pseudoautosomal region 1 (PAR1) in one of the family members gametes. To the best of our knowledge, this specific combination has not been previously reported.

Main characteristics of LWD are mesomelia, short stature of variable severity and Madelung deformity of the forearm [1-3]. In 60-70% of LWD patients, the disorder is related to SHOX haploinsufficiency, caused by intragenic deletions or mutations. In 15-30% of patients without an intragenic SHOX mutation or deletion, an enhancer sequence deletion in the 3’-flanking region has been demonstrated [4].

We report an infant presenting with a rare combined phenotype of NF1 caused by a truncating mutation in the Neurofibromin gene and LWD caused by a deletion of SHOX enhancer sequences in the 3’-flanking region. 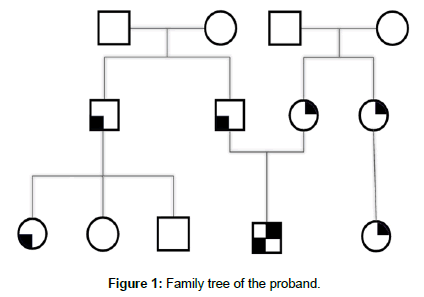 Figure 1: Family tree of the proband.

The proband’s mother (Figure 1, p.II2) and maternal aunt (Figure 1, p.II3) were reported to have NF1. Their previous genetic testing revealed a heterozygote truncating mutation (c.3822_3823delCT) in the Neurofibromin gene (The University of Alabama, USA).

Physical examination of the father revealed height below the third percentile, head circumference in the 90th percentile, mesomelia with milder rizomelia and wrist deformity.

Follow-up examination of the proband at the age of one year and two months revealed more than ten café-au-lait spots. This major feature of NF1 in combination with the family history of this disorder allowed determining a clinical diagnosis of NF1.

Blood samples were collected from the proband and both affected and unaffected members of the family. Genomic DNA was extracted using the LabTurbo DNA mini kit according to the manufacturer’s protocol. Details regarding CMA method were described previously [8].

For c.3822_3823delCT mutation in NF1 gene screening, we developed a PCR mediated site directed mutagenesis (PSDM)-based test, followed by restriction enzyme digestion. We designed PCR primers, in which the forward primer bordered the c.3822_3823delCT mutation site and included the T>G nucleotide change in the 20th position of the primer so that in the normal allele a BspQ1 restriction site is created. The sense primer TGGCAGACTCCATGCAGACGCT, and the antisense primer TCAGCCCTGCACATTCTGT, were used under the following PCR conditions: denaturation at 94°C for 5 min; 30 subsequent amplification cycles of 94°C for 1 min, 58°C for 1 min, 72°C for 45 sec; and elongation at 72°C for 5 min. Using this primer set for amplification from genomic DNA gave a 150 bp fragment and generated BspQ1 differential cleavage products of the mutant allele (remaining 150 bp) versus the wild-type allele which is cleaved (123 bp +27 bp).

As proband’s and his father physical examination raised a considerable suspicion of LWD, fluorescence in situ hybridization (FISH) analysis for SHOX deletion was performed. This tests yielded negative results.

For further diagnostic investigation, Chromosomal Microarray Analysis (CMA) was performed on the proband’s and his father’s DNA. This test results were also negative for microdeletions or microduplications within the genomic region encompassing the SHOX gene. However, a 1.032 Mb heterozygous deletion in the pseudo-autosomal region (PAR) proximal (downstream) to the SHOX gene was found in both arrays (chrXp22.33:740,718-1,772,553). This deletion contained 11 genes, including one OMIM morbid gene (CSF2RA gene, OMIM #306250).

Molecular analysis for the familial Neurofibromin mutation confirmed the clinical diagnosis of NF1 in the proband.

The association of short stature and café-au-lait spots appears in numerous syndromes, such as Noonan syndrome, Fanconi anemia, Russell-Silver syndrome and Kabuki syndrome. However, one must remember that such an association might be related to an incidental combination of two independent syndromes. The combination of LWD and NF1 has been previously described in a single paper [9]. However, to the best of our knowledge, this manuscript is the first report describing a unique association of NF1 and LWD resulting from a downstream enhancer deletion of SHOX gene.

Pseudoautosomal region 1 (PAR1) of sex chromosomes contains the SHOX gene and seven highly conserved non-coding DNA elements (CNEs) with cis-regulatory activity [10]. SHOX haploinsufficiency is present in about two thirds of LWD patients [11]. Like other genes in PAR1, SHOX escapes X-inactivation and therefore is present in two active forms in both males and females [12]. SHOX protein is expressed in the developing limbs and pharyngeal arches in human embryos and likely regulates differentiation and proliferation of chondrocytes [13].

Copy-number variations (CNVs) in PAR1 (microduplications or microdeletions) encompassing SHOX gene 3ʹ-region affecting some of the CNEs have been previously described [14]. One of the first reports describing PAR1 deletions not including SHOX in LWD patients was published in 2005 [15]. Benito-Sanz et al. screened the PAR1 region of 80 patients with LWD in whom SHOX deletions and mutations had been excluded. A novel class of PAR1 deletions located approximately 30-530 kb downstream of SHOX was identified in twelve cases. In 2006, same research group examined 26 LWD Spanish patients by a combination of various methods (Multiplex ligation-dependent -probe amplification (MLPA), microsatellite analysis, Single-Nucleotide Polymorphism genotyping, Denaturing high performance liquid chromatography and DNA sequencing) [16]. The investigators identified SHOX molecular defects in 23% of the patients (deletions in 15% and mutations in 8%), while PAR1 deletions downstream of SHOX were diagnosed in 38% of patients. In 2012, the researchers reported a first recurrent PAR1 deletion downstream of SHOX with identical breakpoints, spanning 47,543 bp in 30 patients with LWD or ISS [17]. The deleted sequence contained eight evolutionarily conserved regions (ECRs 1-8), which were evaluated for SHOX regulatory activity by means of chromosome conformation capture in chicken embryo and luciferase reporter assays in human osteosarcoma cells. These assays indicated SHOX regulatory activity by ECR1, subsequently confirmed to act as a SHOX enhancer. In 2013, Kant et al. published their cohort of 23 index patients and 21 of their relatives with deletion in the 3’-PAR1 region. It has been shown that patients with a deletion in the downstream enhancer region of SHOX displayed variable phenotypes, comparable to those of patients with an intragenic SHOX mutation or deletion [4].

The proband’s paternal parents (Figure 1, p.I1 and p.I2) were not available for clinical or genetic investigation. However, pedigree analysis indicates a crossover in the PAR1 region, which would have occurred in the proband’s father gametes if the deletion was inherited on X chromosome of the paternal grandmother, or in his uncle gametes if the deletion was inherited from the paternal grandfather (Figure 1). A crossover in the PAR is essential for the proper disjunction of X and Y chromosomes in male meiosis. This leads the human PAR with the obligatory crossover, PAR1, to having an exceptionally high male crossover rate, which is 17-fold higher than the genome-wide average [18].

In conclusion, we report a patient with a unique coincidence of two Mendelian disorders, a deletion in the downstream enhancer region of SHOX gene resulting in LWD and Neurofibromin gene truncating mutation causing NF1 phenotype. To the best of our knowledge, this specific coincidence as not been previously published. This case highlights the importance of wide differential diagnosis including an option that independent symptoms might reflect a combination of more than one genetic entity.

We are grateful to the family for their contribution. We thank the members of the Molecular Genetic laboratory for their assistance.