Objectives: Pulmonary dysfunction is the main cause of mortality in cystic fibrosis and has a close relationship with malnutrition. Therefore, early detection of malnutrition is essential to starting nutritional interventions as soon as possible. Routinely BMI-Z-Score is used as a marker of malnutrition. To evaluate whether body composition may be a better predictor of malnutrition, the standardised phase angle (SPhA) is determined for comparison.

Methods: We divided 156 children and adolescents with cystic fibrosis according to the severity of pulmonary dysfunction into normal dysfunction (NF n=120; FEV1% ≥ 75%) and severe dysfunction (SF n=36; FEV1%<75%) groups, using FEV1% measured by spirometry for classification. To assess nutritional status, we calculated the BMI-Z-Score and determined the SPhA with bio-impedance analysis.

Results: An intraclass-correlation showed no agreement between BMI-Z-Score and SPhA. Stepwise multiple regressions with FEV1% as the dependent variable showed that BMI-Z-Score was the only significant predictor in NF and accounted for 16% of the observed variance. In SF, 34% of the variance was explained by SPhA.

Conclusion: SPhA may be a better prognostic indicator of severe pulmonary dysfunction in children and adolescents with cystic fibrosis than BMI-Z-Score. Therefore, the early recognition of malnutrition by SPhA may improve clinical outcomes through earlier initiation of nutritional interventions.

The standardised phase angle may be a better prognostic indicator of severe pulmonary dysfunction in children and adolescents with cystic fibrosis than BMI-Z-Score.

The early recognition of malnutrition by the standardised phase angle may improve clinical outcomes through earlier initiation of nutritional interventions.

Cystic fibrosis (CF) is the most common autosomal recessive genetic disease in the white population, occurring in approximately 1 in 3000 births [1]. It is caused by mutations in the cystic fibrosis transmembrane regulator (CFTR) gene, which functions primarily as a chloride channel and is expressed in many epithelial and blood cells. Therefore, CF leads to a complex multisystem disorder affecting various cells, tissues and organs, such as secretory cells, the sinuses, lungs, pancreas, liver, and reproductive tract. The infection and inflammation of the lungs is the main cause, with at least 80% mortality [2]. However, malnutrition is the earliest and most noticeable manifestation and has a close relationship to lung disease. So increases the pulmonary disease energy expenditure and concurrently reduces appetite. Furthermore, good nutritional status is associated with good lung function [3]. In this regard, an early detection of malnutrition is essential to starting nutritional interventions as soon as possible.

Normally, nutrition status in children and adolescents with CF is determined by anthropometric measurements of height and weight expressed as a Z-Score using age-related reference values (i.e., the body mass index (BMI) Z-Score). However, these measurements show a lack of accuracy in detecting malnutrition in children and adolescents with CF compared to total body potassium [4] or skinfold thickness measurements [5]. Therefore, body composition seems to be a better predictor of malnutrition. Dual-energy X-ray absorptiometry is highly reliable and widely used to determine body composition. Nevertheless it is very expensive and increases the already high X-ray exposure of children and adolescents with CF [6]. The less expensive bioelectrical impedance analysis, as a non-invasive and easily performed method, can routinely be used to assess body composition. Studies comparing dual-energy X-ray absorptiometry with bioelectrical impedance analysis measurements reported both high correlations for fat free mass and fat mass in patients with CF and large variability on individual level [7,8]. One possible explanation seems to be the absence of CF-specific equations to determine body composition from bioelectrical impedance analysis. Thus, the raw bioelectrical impedance analysis parameter phase angle (PhA) calculated from resistance and reactance is more promising because it is a marker of clinically relevant malnutrition in different clinical conditions, like cancer [9], chronic liver disease [10], or in children and adolescents undergoing Hematopoietic Stem Cell Transplantation [11]. Additionally, PhA has been shown to be a good predictor of mortality and morbidity in HIV/AIDS [12], cancers [13], liver cirrhosis [14], and dialysis [15]. When PhA is also transferred in a Z-Score with age-, sex- and BMI-related reference values, the resulting standardised phase angle (SPhA) is considered a more suitable predictor of malnutrition than PhA [16]. Consequently, we determined the BMIZ- Score and SPhA in children and adolescents with CF and analysed their association with the severity of pulmonary dysfunction.

In this prospective, cross-sectional study, we examined 156 children and adolescents with CF aged 6-18 years, who were randomly recruited from the Children’s Hospital CF-Ambulance of the Hannover Medical School, Germany. During their outpatient visits, the patients routinely underwent several tests, including anthropometric measurements, bio-impedance analyses, spirometry and exercise testing. The inclusion criteria were as follows: CF diagnosed to international standards [17], age between 6 and 18, accomplished anthropometric measurements, bio-impedance analysis, and spirometry. Patients with lung transplantation were excluded.

The study was approved by the Ethics Committee of the Hannover Medical School, and the parents or legal guardians of all patients gave their written consent.

Weight was measured with an electronic scale (seca 910, seca, Hamburg, Germany), to the nearest 0.1 kg, and height was determined with a stadiometer (Ulmer stadiometer, Busse Design+Engineering GmbH, Elchingen, Germany), accurate to 0.1 cm. The patients wore light clothing and no shoes. BMI was calculated as the ratio of weight (kg) to height (m) squared. To standardise BMI for age and sex, a BMI-Z-Score was determined for each patient according to Flegal et al. [18]. Additionally, we determined BMI percentiles using age- and sex-matched CF peers as a reference [19].

To classify pulmonary function, we measured the forced expiratory volume at 1s (FEV1) with a spirometer (Jaeger Master Screen, CareFusion, Wurmlingen, Germany), in accordance with the American Thoracic Society guidelines [21]. Values were expressed as a percentage of predicted values (FEV1%), according to Knudson et al. [22]. Spirometry was performed without bronchodilation.

Normal distribution was tested with the Kolmogorov-Smirnov- Test. To compare groups of NF and SF, unpaired two-sided student t-tests were performed for parametric data, and Mann-Whitney-UTests, for non-parametric data. Hedges’ g was determined to estimate the effect size. To evaluate the extent of agreement between BMI-ZScore and SPhA, an intraclass correlation was computed. To identify the relationship to the dependent variable, FEV1%, for all patients and both NF and SF, a multiple regression with the independent variables of BMI-Z-Score and SPhA was performed stepwise with the inclusion criterion of p<0.05 and an increasing p-value until a valid regression was reached. All data are given as the mean ± standard deviation. Significance was accepted as p<0.05. All tests were performed with the SPSS software (Version 24, IBM Corp., Armonk, NY, USA).

Characteristics of all patients and groups of NF and SF are presented in Table 1.

Table 1: Characteristics of all patients and the NF and SF groups. 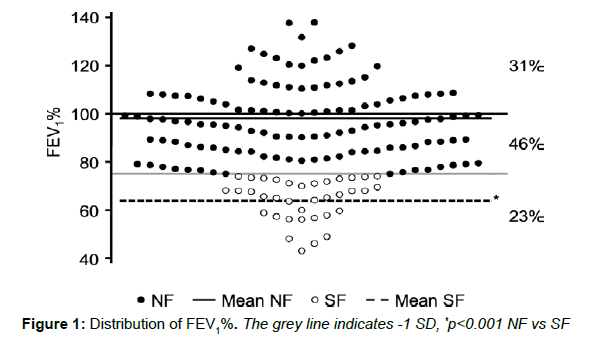 The intraclass correlation showed no agreement (p=0.375) between BMI-Z-Score and SPhA.

In SF, 34% of the variance was explained by SPhA (Table 2). Figure 3 displayed the resulting regression for BMI-Z-Score (Figure 3A) and SPhA (Figure 3B).

Figure 3: Relationship between BMI-Z-Score (A) and standardised phase angle (SPhA) (B) with FEV1%. The grey lines indicate the cut-off of 75% between NF and SF.

Table 2: Results of the multiple regressions with FEV1% as the dependent variable.

The main finding of our study is as follows: the standardised phase angle (SPhA) may be a better prognostic indicator of the severity of pulmonary dysfunction in children and adolescents with cystic fibrosis than the BMI-Z-Score.

The BMI-Z-Score and BMI are widely used to assess the nutrition status of children and adolescents with CF. Therefore; a low BMI is associated with more severe pulmonary disease [23]. This is in line with our results, as BMI-Z-Score correlates with FEV1% in all patients. In this regard, the goal of the CF-Foundation of being over the 50th BMI percentile for healthy children and adolescents should be reached to slow the progress of lung disease [24].

Because BMI takes only weight and height into account and lacks information about body composition, such as fat mass and fat-free mass, changes in body tissue composition cannot be detected by BMI measurements. To overcome this disadvantage, several studies have examined the relationship of fat mass or fat-free mass on lung disease in children and adolescents with CF. Williams et al. [25] showed that lower fat mass in girls with CF was associated with poorer lung function, and in children and adolescents with CF, a deficiency of fatfree mass leads to reduced FEV1% [26,27].

However, determination of body composition relies on invasive methods such as dual-energy X-ray absorptiometry with small amounts of radiation or on equations based on reference values from healthy populations such as skinfold thickness measurements or bioelectrical impedance analysis. Furthermore, body composition changes occur in children and adolescents as part of normal growth making interpretation of longitudinal data complicated. In contrast, PhA is calculated solely from two raw parameters, the resistance and the reactance, obtained from non-invasive bioelectrical impedance analysis without any internal algorithm. Therefore, resistance represents the extra- and intracellular fluid, and reactance, the capacitance of the cell membranes. Thereby, a low PhA is associated with cell death or decreased cell integrity. PhA has been shown to be a predictor of mortality and morbidity in various diseases such as cancer, dialysis, or HIV [12-15]. Additionally, standardising PhA eliminates the influence of age, gender, and BMI and allows the comparison of individuals and heterogeneous populations [12] and enhances the significance as a predictor [16].

Although the SPhA has yet not been used to evaluate the association with pulmonary dysfunction in children and adolescents with CF, our results showed a relationship between SPhA and FEV1%. Additionally, multiple linear regressions revealed a possible superiority of SPhA over BMI-Z-Score in severe pulmonary dysfunction.

Due to the cross-sectional study design, further investigations are needed to show whether SPhA detects changes in nutritional status of children and adolescents with CF earlier than the BMI-Z-Score. Johansen et al. [28] showed a decreased in the phase angle in patients on haemodialysis over one year with no significant changes in body composition. As bioelectrical impedance analysis uses electrodes affixed on the skin to measure an electric current that runs through the body, the altered sodium content in the sweat of patients with CF may affect the measurement [29]. But if the conditions of measurement are standardized, the reliability of bioelectrical impedance analysis is high, making it useful for changes over time [30].

In conclusion, SPhA determined by non-invasive, reproducible bioelectrical impedance analysis may be a better prognostic indicator of severe pulmonary dysfunction in children and adolescents with CF than BMI-Z-Score. The early recognition of malnutrition may result in improved clinical outcomes through earlier initiation of nutritional interventions. 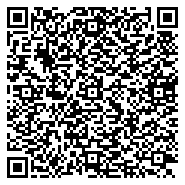