Functional Foods and Their Importance in Geriatric Nutrition

The world population is growing older rapidly, while fertility rates are decreasing and people are living for longer periods. Globally, the population of 65 years old is estimated to be 1.6 billion. In US, 65 years and older population is estimated to be nearly double over the next three decades from 48 million to 88 million by 2050 [1]. Functional foods provide not only daily required nutrients but also other secondary metabolites with biological activities and physiological benefits to protect from infections and diseases. Nearly 2500 years ago, the familiar phrase “Let food be thy medicine and medicine be thy food” was coined by Hippocrates. The metabolic activity progressively decreases in elderly population of over 65 years. Hence, they should balance medication with healthy food habits and regular exercise to maintain good health and longevity. Selective functional foods help the elderly to cut down and/or eliminate the medicinal intake by improving their physiological functions. Many seniors are reluctant towards medicine intake and avoid medication accidentally or deliberately. In such cases, functional foods should become an integral part of daily diet [2]. However, this process should be administered under the combined supervision of qualified nutritionists and physicians. For example, a patient on warfarin (1), after consumption of goji juice developed symptoms of epistaxis, bruising and rectal bleeding which suggested the synergic effect of goji juice and warfarin (1) [3]. Therefore, qualified medical professional should acquire sufficient knowledge on functional foods and their constituents to foresee any synergic effect of functional foods with medication (Figure 1). 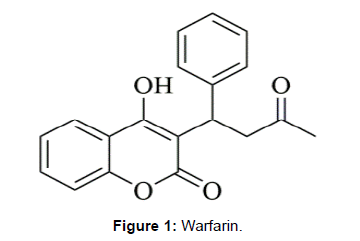 In addition, these foods provide nutrients and minerals that are essential to maintain normal body functions. The most common diseases that affect the elderly are cardiovascular, diabetes, cancer, dementia, Alzheimer’s and Parkinson’s diseases. The research on functional foods suggested that the secondary metabolites assist in slowing the progression or completely prevent some diseases onset [4]. The term “Functional Food” was first used in Japan in the 1980s. In later years, the Japanese government enacted a regulatory system where the functional foods were to be labelled as “Foods for Specified Health Use” (FOSHU) [5]. The present review presents some information on selective, not so familiar functional foods that play an important role in maintaining healthy life style among the elderly.

Since the first 50 years of the 20th century, scientific focus was on the isolation and identification of essential vitamins and their role in preventing various nutritional deficiencies and diseases. The dietary guidelines were aimed at public policy and education suggesting the importance of consuming a diet that was low in saturated fat, high in vegetables, fruits, whole grains and legumes to reduce the risk of chronic diseases such as cardiovascular, cancer, osteoporosis, diabetes and stroke [6,7]. Contemporarily, more research is focussed to identify physiologically active secondary metabolites in foods from both plants and animals that could potentially reduce the risk of a variety of chronic diseases.

Investigations on the class of physiologically active components, -3 (n-3) fatty acids predominately found in fish resulted in the identification of two important fatty acids eicosapentaenoic acid (EPA) (2) and docosahexonic acid (DHA) (3). The DHA (3) is an essential component of the phospholipids of cellular membranes, mainly in human brain and retina and is essential for their proper functions. Nonetheless, further studies revealed that intake of -3 (n-3) fatty acids decreased mortality due to myocardial infraction in patients with coronary diseases [8,9]. The American Heart Association (AHA) Dietary Guidelines suggested 2-servings/week consumption of fatty fish like mackerel, sardine, albacore, tuna, herring, lake trout and salmon to maintain healthy heart [10] (Figures 2 and 3).

One category of biologically active animal-derived product which has gained a lot of interest recently is probiotics. The microorganisms in probiotics play a beneficial role in human health assisting intestinal function, immune function, stomach health, urogenital health, cholesterol lowering and hypertension [12,13]. Another category of non-digestible food ingredients are prebiotics that benefits the host by selectively stimulating the growth and activity of certain beneficial bacteria in the colon thereby improving host health. Prebiotics are short-chain carbohydrates like fructooligosaccharides and inulin which enter the colon serving as nutrients for the endogenous colon bacteria. The most recent concept is “synbiotics”, a mixture of probiotics and prebiotics (food containing both intestinal bacteria and indigestible dietary fibre). Synbiotics benefited the host by increasing the survival and implantation of live microbial dietary supplements in the gastrointestinal tract, stimulated the growth by activating the metabolism of certain health promoting bacteria [14].

Turmeric (Curcuma longa): Turmeric (Curcuma longa), with low toxicity is extensively used as colouring and flavouring spice in the preparation of different cuisines around the world. The research has proven that most of the turmeric activities are attributed to the main constituent, curcumin (4) with antioxidant, antifungal, antimicrobial, anti-HIV, hepatoprotective and nephroprotective activities. Curcumin (4) was potential against cancer, diabetes, allergies, oedema and Alzheimer’s diseases including other chronic diseases. Besides, curcumin (4) reduced oxidative stress responsible for inducing cancer, diabetes, and inflammatory illnesses. In colon and prostate cancers, curcumin (4) inhibited cell proliferation and tumor growth and supressed the activity of several various mutagens and oncogenes. Turmeric exerted cardioprotective effect through antioxidant action by lowering lipid peroxidation and platelet aggregation. Its anti-inflammatory activity was related to its ability to inhibit the activities of cyclooxygenase 2 (COX2) and lipooxygenase. Turmeric inhibited carcinogenesis including angiogenesis [15]. Turmeric exhibited several protective effects on the gastrointestinal tract. In addition, turmeric decreased ulcer formation caused by stress, alcohol consumption and pyloric ligation; restored gastric wall mucus resulted from gastrointestinal abuses. It inhibited intestinal spasms and increased bicarbonate, gastrin, secretin and pancreatic enzyme secretions. [16] However, excessive consumption of turmeric could induce hepatotoxic effect [17] (Figure 4). 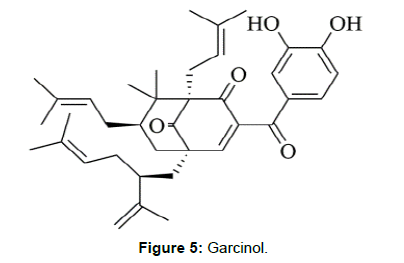 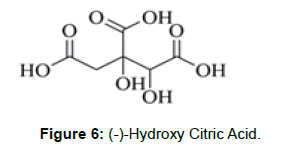 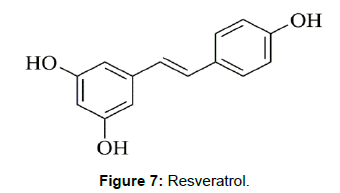 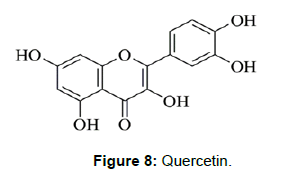 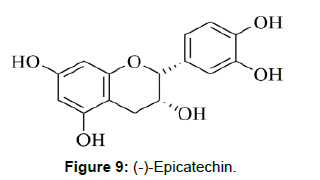 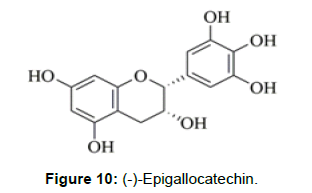 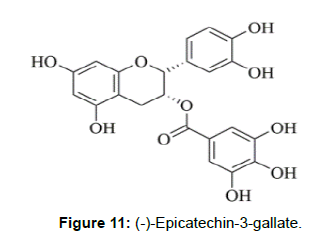 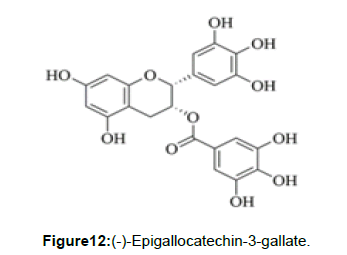 Drumsticks (Moringa oliefera): Drumstick plant (Moringa oliefera) edible fruits and leaves have both nutritional and multimedicinal activities. Some of the medicinal effects are antimicrobial, antifungal, antihypertensive, antipyretic, anti- cancer, anti-inflammatory, antihyperglycemic and water purification [30]. In hyperglycemic patients beta cells get destroyed and high glucose enters the mitochondria and releases reactive oxygen species. Beta cells contain less antioxidant and hence result in the apoptosis of beta cells. This in turn reduces insulin secretion which leads to hyperglysemia and diabetes. The flavonoids like quercetin (7) in drumstick seed showed radicle scavenging activity, protected the beta cells and kept hyperglycemia under control [31]. Moringa oliefera leaf juice displayed a stabilizing effect on blood pressure. Two thiocarbomate glycoside, niazinin A (13) and niazinin B (14) - present in the leaf were responsible in lowering the blood pressure [32] (Figures 13 and 14). 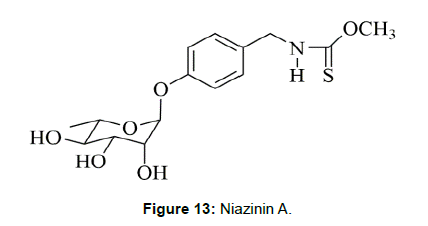 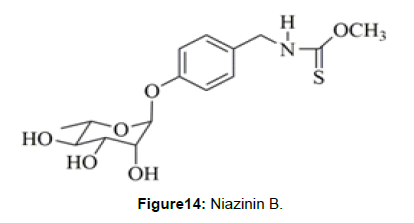 Foods like oats, soy and Psyllium husk are rich in fibre, low in saturated fat, cholesterol and reduce the risk of cardiovascular diseases. Furthermore, foods containing at least 0.65 grams of phytosterols consumed twice a day with meal might reduce the risk of heart disease. These health claims were approved by Food and Drug Administration (FDA) [33].

Usually, a regular diet abundant in fruits and vegetables improves overall health in the elderly. Both fresh and frozen fruits and vegetables provide necessary vitamins, fibre, minerals and antioxidants that are protective against multiple chronic diseases ranging from constipation, cardiovascular diseases, diabetes, Alzheimer’s disease, obesity and cancer in the elderly [34]. In addition, periodic consumption of functional foods could improve health among the elderly due to the presence of unusual secondary metabolites like flavonoids, isothiocyanates, phenolic acids, terpenoids and sterols with proven biological activities.

Functional foods are considered to be beneficial for better health and well-being, whereas fortified or enhanced foods provide a health benefit beyond the traditional nutrients. Functional foods provide optimal digestive health and boost some specific claims supported by scientific research for the elderly. Incorporating these foods in daily diet provides multiple health benefits. Functional foods, in combination with other healthy habits and life style, help maintaining good immune response, digestive health, locomotion, cardiovascular function, and general wellbeing in the elderly. Some functional foods cause food allergies and in such cases the allergy causing foods should be avoided. Furthermore, the functional food interactions with other dietary components and potential adverse interactions with pharmaceutical drugs must be clearly understood and evaluated. Functional foods are neither a panacea for poor health habits nor a “miracle bullet”. In addition to proper diet, the elderly should include regular exercise, stress reduction, tobacco avoidance, healthy body weight and positive health practices to maximize health and reduce diseases risk.