Aim: Metabolic bone disease is fairly common in premature infants. The incidence and severity of the disease increase with decreasing gestational age and birth weight. Vitamin D in addition to calcium and phosphorus is important for optimal bone health. The aim of this study was to evaluate the effect of current vitamin D supplementation (400 IU) on the level of Vitamin D and other bone health parameters (calcium, phosphorus, PTH and alkaline phosphatase) in premature infants, especially VLBW and ELBW infants.

Methods: This was a prospective non-interventional trial for assessing the adequacy of Vitamin D at a dose of 400 IU for maintaining adequate Vitamin D level and other bone health parameters such as calcium, phosphorus, Alkaline phosphatase and PTH level in neonates whose birth weight ranged from 500 to 1500 grams. The study was conducted at the neonatal intensive care unit of Children’s Hospital of Georgia of Augusta University.

Adequate Vitamin D status during pregnancy is important for fetal skeletal development, tooth enamel formation, and perhaps, general fetal growth and development. During human pregnancy, approximately 30g of calcium and more than 16g of phosphorus are transferred trans-placentally from the maternal circulation to the growing fetus, the bulk during the third trimester when fetal calcium accretion is approximately 140 to 150 mg/kg per day [1]. Placental transfer of calcium ceases abruptly at birth. In healthy term newborns, total calcium concentration and iCa2+ decline from nearly 11 mg/dL and 6 mg/dL respectively.

In preterm infants, calcium absorption from the intestine is nonsaturable and may be vitamin D-independent [2]. During the 1st week of life, urinary phosphate excretion is significantly higher in preterm than in term infants but then approximates that of term infants, possibly owing to accelerated postnatal renal maturation. Calcium excretion is low during the 1st week, when the newborn must compensate for the postpartum fall in serum calcium. After the first several days, calcium excretion increases with a magnitude inversely proportional to gestation. However, in preterm breastfed infants who are more than 2 weeks old, the UCa/Cr can exceed 2.0 [1]. These changes may reflect the relative phosphate deficiency in many preterm infants, which results in an adaptively low urinary phosphate excretion, decreased bone mineralization, and, consequently, relatively high urinary calcium excretion. For all these reasons, preterm babies, especially VLBW (Very low birth weight), are at risk for metabolic bone disease [3]. Osteopenia of prematurity or rickets manifests, if premature infants are not supplemented with adequate calcium/phosphorus or Vitamin D.

Associated GI issues like feeding intolerance, necrotizing enterocolitis are also more prevalent in preterm babies which make them prone to develop diseases related to nutritional deficiencies. Poor mineral intake and absorption after birth and failure to get high rates of mineral accretion especially calcium and phosphorus in the third trimester increase incidence of metabolic bone disease in preterm infants [4]. There are other factors which contribute to metabolic bone disease like long term use of parental nutrition, unfortified human milk, diuretics therapy, prolonged steroid use and renal phosphate wasting. Osteopenia of prematurity can present as hypotonia, pain on handling due to pathological fractures, decreased linear growth with sustained head growth, frontal bossing, and enlargement of ankles, knees and wrists. Current recommendation from the AAP suggest daily intake of 400 IU/day of Vitamin D for all infants, children and Adolescents beginning in the first few days of life (clinical report from AAP 2008) [5]. The Institute of Medicine and the ESPGHAN guidelines suggest using a higher dose up to 600-1000 IU/day [6].

This study was a prospective non-interventional trial for assessing the adequacy of Vitamin D at a dose of 400 IU for maintaining adequate Vitamin D level in neonates whose birth weight ranged from 500 to 1500 grams. The study was conducted at the neonatal intensive care unit of Children’s Hospital of Georgia of Augusta University. The study was approved by the IRB at Augusta University.

All neonates born at Children’s Hospital of Georgia and admitted to the neonatal intensive care unit whose birth weight >500 g and <1500 g were eligible to be enrolled in the study in the first 48hrs after birth. Infants with congenital gastrointestinal and renal malformations were excluded from the study. Parents’ informed and written consent was obtained. Enrolled infants received the currently recommended 400 IU of Vitamin D as per clinical practice. The supplementation of Vitamin D began soon after birth. 400 IU Vit.D was provided in TPN (Total Parenteral Nutrition), if the infant was not being fed enterally. Intravenous Vit.D supplement was changed to oral once infant reached full enteral feeds. Table 1 represents the chronology of the study labs drawn.

• *Study labs drawn within first 48 hours after birth and every 2 weeks afterward till infant reached 2000 g.
• Study labs needed 2 ml blood draw every 2 weeks.
• Efforts were made to coordinate study labs and standard Labs together.

Enrolled infants’ vitamin D level and rest of the other parameters at birth are shown below in (Table 3). Vitamin D value in first 48hrs after birth should closely Correlates with maternal vitamin D level in the first 48 hours after birth status. We found ~80% of enrolled infants’ vitamin D levels in both group were in the deficient range. There was no infant in ELBW group while only 22% infants vitamin D level in first 48 hours after birth were in the sufficient range. (Table 3). There was no statistical significance in the other biochemical parameters such as PTH, Alkaline phosphatase and phosphorus between two groups except calcium level at birth (Table 4). Table 5 represents Vitamin D level after 8 weeks of supplements. Thirty percent of ELBW infants remained in the deficient range while no infant in VLBW group was in deficient range. But, interestingly, fairly large percentage of infants remained in insufficient range, 40% in ELBW and 55.6% in VLBW group (Table 5). After 8 weeks of vitamin D supplementation only 30% infants in ELBW and 44.4% infants in VLBW group were able to achieve 25(OH) D in the sufficient range. Rest of the biochemical parameters PTH, Alkaline phosphatase, calcium, phosphorus level and change in the body weight were followed every 2 weeks and their changes in level over 8 weeks and between two groups, shown in Figures 1-6. Weight gain was significantly better at the end of 8 weeks in VLBW compared to ELBW infants. 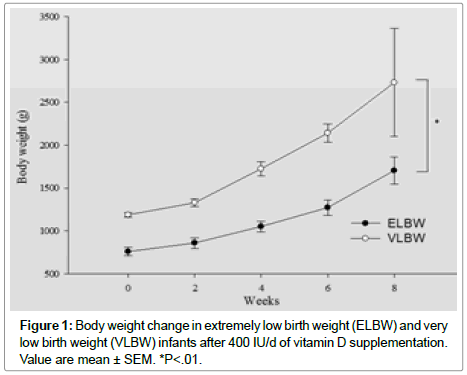 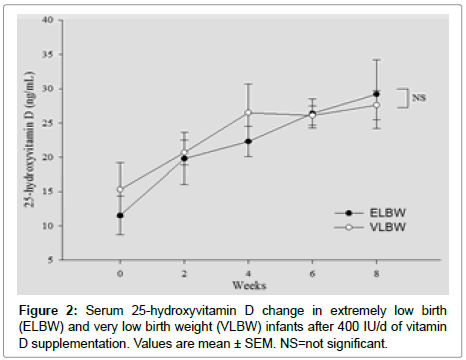 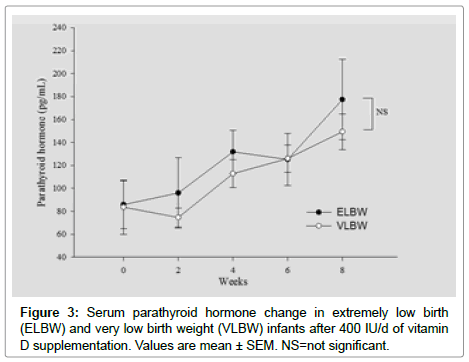 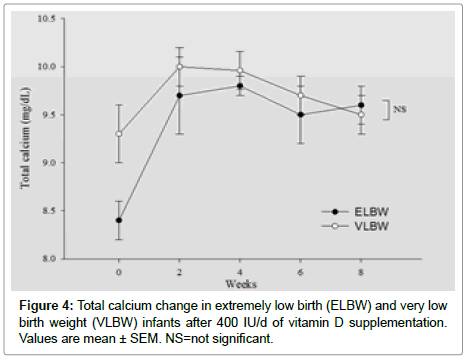 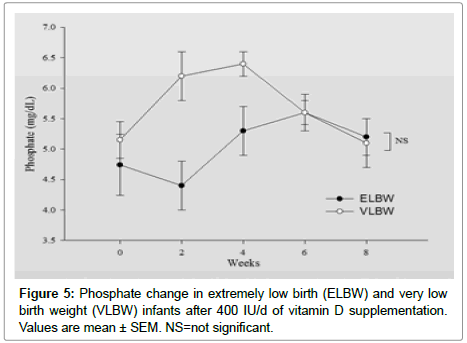 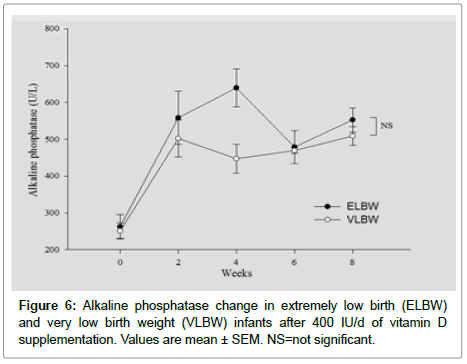 Table 4: Other biochemical parameters in first 48 hours after birth*.

Note that, calcium level was significantly lower in ELBW group at birth compared to VLBW group as shown in Figure 4. At 8 weeks after supplements, there was no statistically significant difference in PTH, Alkaline phosphatase, calcium and phosphorus levels between the two groups.

Premature infants are at high risk of developing metabolic bone disease because of lack of mineral accretion which occurs in the last trimester [2]. Rickets is the classical vitamin D deficiency disease in infants and young children, characterized by a failure of adequate bone mineralization, resulting in soft bones and skeletal deformities. The incidence and severity increase with decreasing gestational age and birth weight [4]. In preterm infants, osteopenia of prematurity with or without rachitic changes usually appears between 3 and 12 weeks of age [4]. In VLBW and ELBW infants; postnatal bone mineralization significantly lags behind the expected intrauterine bone mineralization rate. The main factor responsible for this is the inability to provide sufficient calcium and phosphorus in total parental nutrition, on which most of these small infants rely for their nutrient needs. The AAP recommendation of vitamin D supplements targeted mainly term infants; no separate recommendations are made for preterm infants. Infants at risk of developing vitamin D deficiency are preterm and exclusively breast fed infants. Most NICUs at present supplement preterm infants 400 IU vitamin D daily.

Our study on VLBW and ELBW infants reveals that 400 IU vitamin D may not be sufficient to achieve 25 (OH) D levels in sufficient range (>30 ng/ml). 2/3 (70%) of ELBW infants and almost half of VLBW (55%) 25 (OH) D levels remains <30 ng/ml. Further, we did not find statistically significant effects on other bone health parameters like alkaline phosphatase, PTH, phosphorus and calcium on VLBW OR ELBW group after 8 weeks of supplements.

In summary, a Vitamin D supplement of 400 IU per day in addition to that obtained from fortified human milk [~35 IU/d] did not result in Vitamin D levels considered to be in the “sufficient” range. Based on our study results VLBW and ELBW infants may need increased doses of Vitamin D supplements. Our study supports the finding of the study by Kislal et al. [8], in which they found no difference on calcium and phosphorus level between the groups which they randomized to receive 200 U/kg, 400 U/kg and 800 U/kg. Backstrom et al. [9] studied 39 preterm infants (<33 wks) in two groups, one received 200 IU/ Kg, max 400 IU and other group received 960 IU/day of vitamin D; they found 200 IU/kg, max 400 IU/day was adequate in maintaining vitamin D levels, which our study did not find similar effect [10-13].

Our study reveals that current vitamin D supplementation (400 IU) may not be adequate to maintain sufficient level of 25(OH) D in all infants less than 1500g despite fortification. Our study has important limitations that require consideration. First, the number of study infants was relatively small, so it may be premature to draw final conclusion at this point. Next, this study only assessed the adequacy of current vitamin D supplements (400 IU) and did not compare higher dose of vitamin D. For future, there is a need for a large randomized control trial in premature infants with higher dose of vitamin D supplementation and its effect on various bone health parameters.