Nano-spray drying is a new method to achieve drug particles in nanosize with high yield and low cost. The nano-spray dryer consists of inlet tube for sample entry and outlet one to recovery the excess sample to be used again without causing any loss in sample volume, and it also consists of drying chamber, electrostatic stainless steel collecting cylinder and different nozzle size (4.0, 5.5 and 7.0 μm) to control particle size during drying process. The samples in the nanospray dryer are sprayed by vibration of piezoelectric driven actuator in the nozzle, then sprayed solution dry in the drying chamber and the produced nanoparticles form as a layer on the wall of collecting cylinder as a result of repulsion of charges presented in nano-spray dryer’s electrode [1].

The nano-spray dryer was used to study the effect of different apparatus conditions on the activity β-galactosidase as a protein model and trehalose as stabilizer. The activity of the prepared β-galactosidase powder was not affected, when the nano-spray dryer was adjusted to 80ºC as inlet temperature using nozzle size; 40 μm and 0% ethanol for the prepared spray solution [2]. Nicergoline nanoparticles were prepared by nano-spray dryer using water: ethanol solution to obtain pure nicergoline nanoparticles with amorphous form to enhance drug solubility. The amorphous form of the drug with particle size of 0.79 μm revealed an increase in drug release and good stability over one year of storage at 3ºC [3].

Inhaled powder of ketoprofen lysine was prepared by nanospray dryer in presence of leucine as dispersity-enhancer using 30% isopropyl alcohol solution, using different nozzle size. High yield value, low process time and suitable powder for inhalation was obtained when 4 μm nozzle was covered with thin layer of span 80 to enhance powder production [4]. Cyclosporine and dexamethasone were dissolved with different weight ratios with PLGA in organic solvent composed from dichloromethane and ethanol (70/30%) and were sprayed through the nano-spray dryer. The produced nanoparticles revealed spherical particles surface with particle size values between 0.90 and 2.23 μm and process yield values varied between 20.05 and 55.5 % [5].

In our previous study, econazole nitrate nanosuspension was prepared using hydroxypropyl-β-cyclodextrin and methyl-β- cyclodextrin as a carrier, and polyethylene oxide, polyvinylpovidone K 30, Tween 80, poloxamers 407 and Cremophor EL as a stabilizer with using of ethanol as organic solvent. The use of hydroxypropyl- β-cyclodextrin with Tween 80 achieved good particles stability and improving drug release from the prepared nanosuspension [7]. Therefore, in this work, we aimed to study the effect of using different weight ratios of drug to cyclodextrin on the stability and drug release of prepared nanoparticles. In this study, econazole nitrate nanosuspension was formulated using 1:1, 1:2 and 1:3 weight ratios of drug to hydroxypropyl-β-cyclodextrin with 10% Tween 80 using nano-spray dryer. The resulting nanoparticles from nano-spray dryer. The obtained nanoparticles were characterized for their morphology, process yield, percentage drug loading, in-vitro drug release, and particle size and zeta potential stability over 6 months of storage at room temperature.

Preparation of econazole nitrate nanoparticles: The formulations were prepared by nano-spray dryer using the closed system. Precisely, drug, HP-β-CD and Tween 80 were dissolved in ethanol as presented in Table 1 and the prepared samples were sonicated well for 15 min (Elmasonic S30H, Germany) to ensure completely clarity of the solution, followed by spraying through the Büchi® nano-spray dryer B-90 (Büchi Labortechnik, Switzerland). The prepared samples were sprayed through nozzle size of 7.0 μm using 95ºC for inlet temperature and 45ºC for outlet temperature using gas flow rate of 115 L/m.

Determination of nano-spray drying process yield: The nanoparticles produced by nano-spray dryer were calculated for their yield values by the following equation:

Stability of econazole nitrate nanosuspension: The stability study was performed as prescribed before at Maged et al. [7]. The produced nanoparticles were dispersed in isotonic buffer pH 7.4, and then, they were stored at room temperature for 6 months. The particle size, polydispersity index and zeta potential for the nanoparticles were measured before and after storage using Malvern Nano Zetasizer ZS (U.K).

In-vitro drug release studies: The obtained nanoparticles by nano-spray dryer were dispersed in isotonic phosphate buffer pH 7.4 and were tested by dialysis method for drug release. Econazole loaded nanoparticles were loaded in dialysis cellulose bag with 1 ml isotonic buffer and were closed by two clamps at each end. The cellulose bag was steeped in 100 ml of a simulated tear fluid (0.68 g NaCl, 0.22 g NaHCO3, 0.008 g CaCl2, 0.14 g KCl and distilled deionized water to 100 mL) with 10% ethanol placed in well closed vessel to avoid medium evaporation using shaking rate of 250 stroke per min and maintained at 34ºC (incubator shaker IKA KS 4000, Germany). Samples were withdrawn at the following time intervals 0.5, 1, 2, 3, 4, 5 and 24 hrs. and were measured spectrophotometrically at 221.5 nm.

The kinetics of econazole nitrate release from nanoparticles was determined by applying Korsmeyer-Peppas equation [8,9]:

Where, Qt/Q ∞ is the fraction of drug released at time t, n is the release exponent and indicative of the mechanism of drug release. K is a constant incorporating structural and geometric characteristic of the controlled release device (having units of t-n). The nanoparticles prepared by nano-spray dryer showed about 6 and 4 times increase in percent drug release after 5 and 24 hours, respectively compared to drug alone (D) that dispersed in isotonic buffer without any additives (p<0.05). This can be explained on the basis that econazole nitrate was presented in amorphous form in the prepared nanoparticles, while crude drug was presented in crystalline form, resulting in decrease of drug release [11]. 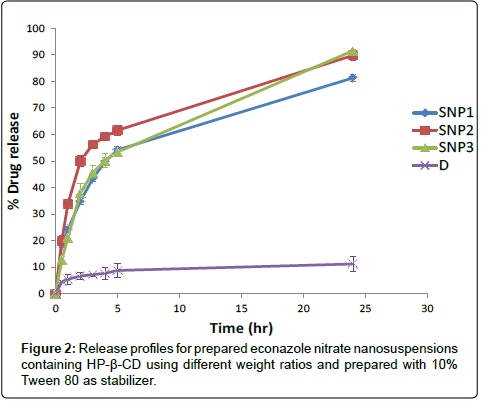 The release kinetics of SNP1, SNP2 and SNP3 formulation, according to Korsmeyer-Peppas equation, showed non-fickian transport.

Nanoparticles have large surface area leads to high total surface energy, which is thermodynamically unstable. Such thermodynamic instability leads to agglomerate of the nanoparticles to reduce the surface energy. Particle agglomeration causes a lot of problems such as crystal growth, rapid settling and Ostwald ripening [13]. Therefore, we did subject our formulations to stability study at room temperature for 6 months. 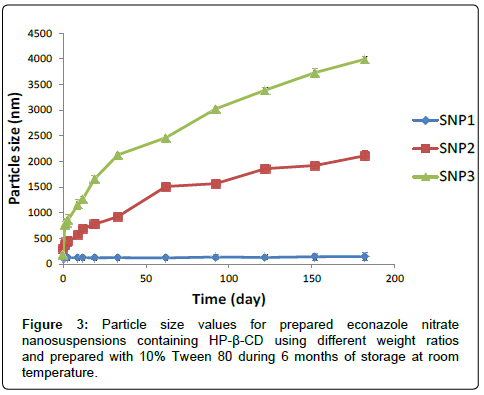 The particle size values for the freshly dispersed formulations SNP1, SNP2 and SNP3 were 325.1, 294.1 and 184.7 nm, respectively. Such decrease in nanoparticles size values with increasing cyclodextrin concentration in the nanoparticles could be explained on the basis that increase HP-β-CD concentration could resulting in an increase in amorphous form of the drug, resulting in smaller particle size [14].

SNP2 and SNP3 formulations showed instability in particle size and PDI values during six months of storage at room temperature compared to those for SNP1 formulation (p<0.05). Increasing weight ratio of drug to HP-β-CD to 1:2 or 1:3, drug to CD, caused a decrease in the stability of drug-CD complex. Such decrease in HP-β-CD complex stability occurred by deprotonisation of hydroxyl groups in the hydrophilic part and the rim of the cyclodextrin cavity with the adjacent hydroxyl groups of another cyclodextrin, resulting in decreasing solubility of drug-CD complex and formation of white large aggregations [15,16]. The inverted microscopy detected formation of crystal growth for both SNP2 and SNP3 formulation as shown in Figure 4 after one month of storage at room temperature. Figure 4: Inverted of microscopy image for (a) 1:2 and (b) 1:3 weight ratio of drug to HP-β-CD revealing formation of crystal growth. 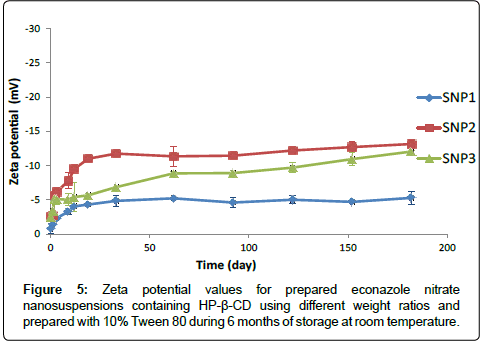 The analysis for the freshly dispersed formulations SNP1, SNP2 and SNP3 revealed zeta potential values; -0.7, -2.5 and -2.3 mV, respectively. Such increase in the negative charge with increasing the content of HP-β-CD in the formulations may be attributed to the large number of oxygen atoms available in the HP-β-CD that have a larger electron cloud, due to the unshared lone pairs, giving negative charge for the formulation.

SNP2 and SNP3 formulations containing 1:2 and 1:3 weight ratio of drug to HP-β-CD, respectively showed increase in their zeta potential values during the stability study and they reached to -13.1 mV for SNP2 formulation and -12.05 mV for SNP3 formulation after the storage period compared to that prepared using 1:1 weight ratio of drug to HP-β-CD (SNP1) (p<0.05) as shown in Figure 4. This instability was explained previously in the section of particle size stability study.

The cyclodextrin nanoparticles that formulated by nano-spray dryer revealed high yield value and percent drug loading. The prepared nanoparticles had particle size values ranging between 184.7 and 325.1 nm. Increasing weight ratio of drug to cyclodextrin from 1:1 to 1:2 and 1:3 revealed increase in percent drug release after 24 hr. On other hand, increasing weight ratio of cyclodextrin affected the physical stability of the particles in the nanosuspension with formation of crystal growth after study period.