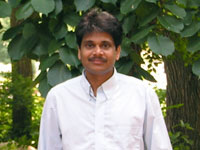 Dr. Vadakkadath Meethal received his Ph.D. in Biochemistry from the University of Kerala, India. Following this, he undertook a National Fellowship in the Molecular Biophysics Unit at the Indian Institute of Science, a premier research institute in India. In 1999, he joined the laboratory of Dr. Robert A. Haworth as a post-doctoral fellow in the Department of Surgery at the University of Wisconsisn-Madison School of Medicine and Public Health. Subsequently, in 2003, he was offered a Scientist position in the Department of Medicine at the University of Wisconsin-Madison School of Medicine and Public Health and where he is currently a Senior Scientist in the Section of Geriatrics and Gerontology.

Dr. Vadakkadath Meethal's current research interests are focused on delineating the role of reproductive hormones in the progression of senescence, neurogenesis, neurodegeneration and neurodegeneration. He along with his colleagues identified a gonadotropin releasing hormone receptor orthologue in C. elegans (Ce-GnRHR), an important model system for studies on embryology, neurobiology and aging. These findings have enabled the use of C. elegans as a model for studying reproductive signaling in development and aging. His research has also identified a regulatory feedback loop in the brain involving the GnRH receptor that modulates the synthesis of neurosteroids in regions of the brain important for learning and memory.